Staring death in the eye

An in-flight emergency totally transforms the behavior of passengers -- and flight attendants. 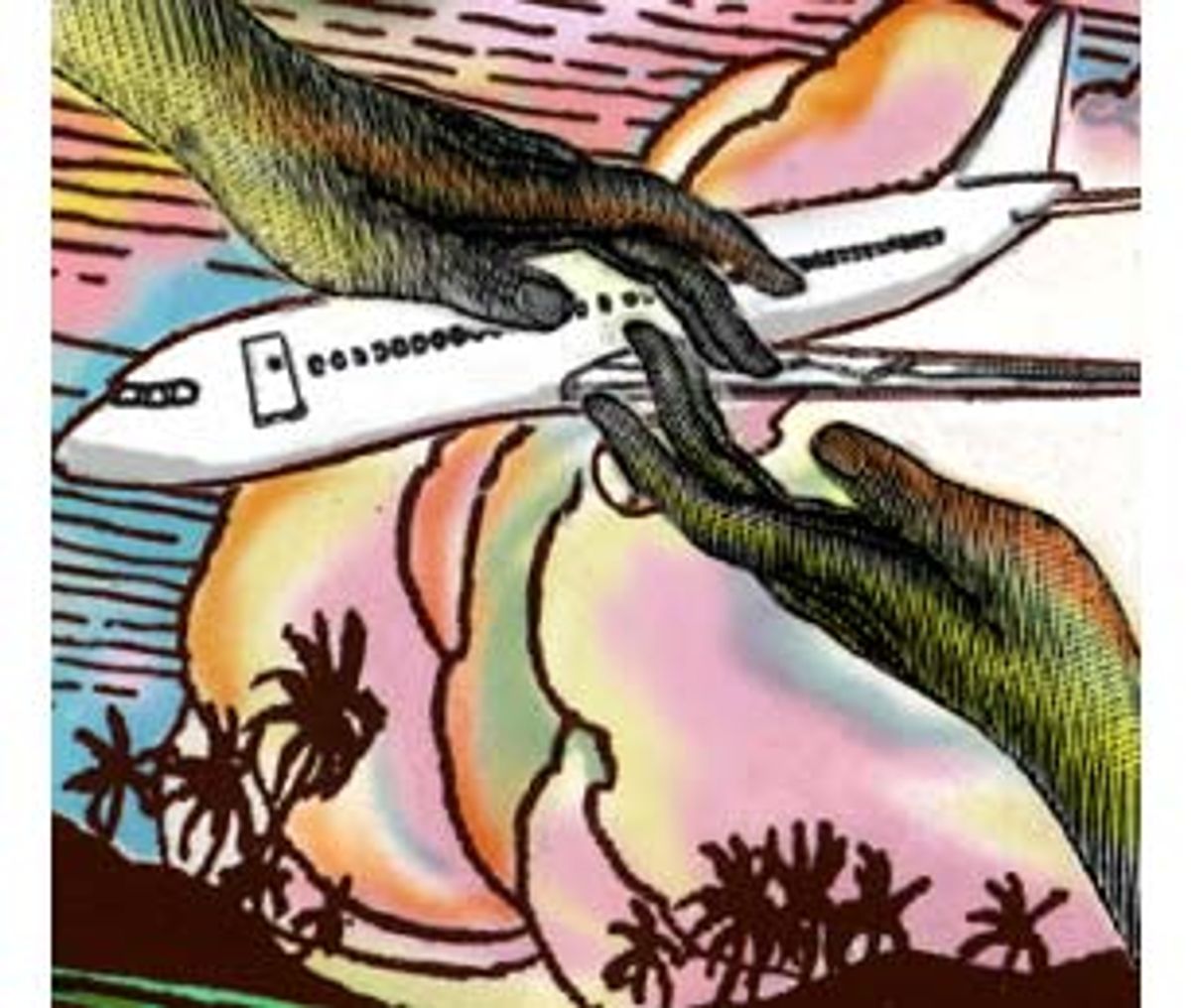 Late one night, as our 727 aircraft began its descent toward rain-swept Augadilla, Puerto Rico, as my three flight attendant colleagues and I stowed and locked the service carts, as we completed the passenger seat-belt check and strapped into our jump seats, as our three-leg, two-country, 14-hour work day was about to transform into a 30-hour layover filled with laughter and cold beer, the captain rang on the crew phone with distressing news. "We've lost both hydraulic systems," he said. "We're diverting to San Juan ..."

Without hydraulics, our pilots flew the aircraft in a condition known as "manual reversion." It's like driving the world's largest tour bus without power steering. The plane responds sluggishly. Manipulating the steering wheel, or in this case, the yoke, requires a level of physical exertion that can make sweat pour from a pilot's wrinkled brow. But the scariest aspect of our hydraulics-less 727 was that the landing gear refused to deploy automatically. Upon approach to the San Juan airport, where clear skies promised less hazardous landing conditions than in Augadilla, the captain would attempt to crank down the landing gear by hand.

As the captain announced an abbreviated version of our dilemma over the P.A. system, an eerie silence swept through the cabin like a fog. The 60 passengers stirred in their seats, exchanging disconcerted glances. Throughout the two-and-a-half-hour flight, strangers who had yet to acknowledge one another, who had yet to partake in casual conversation or trade a simple smile, were suddenly locked in tacit communion. The previously unintroduced leaned toward the previously unconcerned, drawn together by a sudden need to share previously unthinkable emotions.

In a potential life or death situation, even the most condescending passenger will bestow upon flight attendants a level of respect that is usually reserved for priests and emergency room practitioners. As I walked toward the front of the aircraft for an emergency briefing with my crew, one woman turned and stared at me as if searching for her soul inside my own. An elderly man smiled nervously while clutching a rosary that dangled from his neck. Another passenger -- a gentlemen who had refused to cooperate during the safety check -- tightened his seat belt and stared at me wide-eyed like a foot soldier awaiting the lieutenant's command.

We were at the mercy of a God who seemed to care little about aircraft hydraulics and even less about final destinations. This made me nervous. More nervous than I'd ever been in 14 years of flight service. But like a professional athlete matched against a more powerful opponent, I flashed my game face to the worried crowd -- hoping to instill in them, and in myself, the belief that our pilots had the situation under control.

The purser, a senior flight attendant who retired shortly after this incident, let his nerves get the best of him, however. When he stepped out of the cockpit to relay critical information from the captain, his eyes seemed to swim out of focus. "Oh my God," he said, after repeating what we already knew about the landing gear. "Oh God." He blinked repeatedly, as if trying to clear a wayward eyelash.

He turned left, then right, then left again. His mouth hung open in a lingering O. Standing in clear view of the passengers, looking like the bumbling professor who could not remember where he'd left his car keys, or his car for that matter, the purser descended into a functionless stupor. The crew agreed that emergency preparations would be best accomplished with him sitting in his jump seat.

A moment later, there were shouts from the main cabin. The man who had been clutching the rosary was now trying to open the emergency window exit. His fingers cupped the exit handholds; he started to pull. "What the hell are you doing," I said, as I yanked the man away by the back of his shoulders. Though cabin pressure makes it impossible for anyone to open an emergency exit at high altitude, such an attempt is distressing for everyone on board. The offending passenger babbled a nonsensical excuse. His chin fell to his chest, and he began to whimper like a scolded child.

Next to react were two passengers who sneaked into an aft lavatory together. Judging by the repeated sniffing sounds emanating from the lav, and the conspicuous way in which both passenger's eyes jittered once they finally emerged, and the fine dusting of white powder on the wash bin, it seemed obvious that their in-flight angst had been numbed by a few snorts of cocaine.

Moments later, in the opposite lavatory, the smoke detector began to chime. One of the flight attendants walked in and found smoke billowing from an abandoned cigarette. Someone had left it burning on the wash bin, inches away from a roll of toilet paper.

Oblivious to our hydraulic crisis, to the outbreak of precarious behavior that followed in its wake and to the fact that the aircraft was about to attempt landing in San Juan instead of Augadilla, an attractive, albeit inebriated, female passenger suggested that she and I get to know each other better. Much better. So much better, she promised, that her attentions would prevent me from leaving my hotel room until 30 hours later when it was time for me to fly back to Miami. Sitting alone in the last row of seats, she'd had one too many vodka tonics, but apparently not enough companionship. I respectfully declined her invitation, though under less stressful circumstances I might not have been so noble.

As the aircraft prepared for its final descent, our captain began cranking down the landing gear. To insure that it had been successfully deployed, the flight engineer and I were dispatched to the first-class aisle where we proceeded to rip the carpet from its Velcro emplacements. Beneath the carpet lay a small manhole cover. While worried passengers peered over our shoulders, we pried open the cover with a flat-head screwdriver. The flight engineer shone a flashlight down into the darkness, hoping to spot the proper indicator that would tell us the gear had been successfully deployed. Apparently, he saw what he was looking for. He gave a thumbs-up, then told me to follow him to row 23, where we repeated the procedure with similar results.

With both gears seemingly deployed, the plane was now ready for landing. But as the engineer returned to the cockpit, one unanswered question still haunted me. "The landing gear is down," I said, after the engineer gave me the first thumbs-up. "But did it lock in place?" He muttered an answer, something brief and halfhearted. Something I was unable to discern.

The purser, having regained limited use of his facilities, made the routine "prepare for landing" announcement. I made a final compliance check -- as did my other two colleagues -- insuring that seat belts were fastened, tray tables were locked and emergency exits were completely clear of carry-on bags.

Along the way, I made direct, penetrating, see-through-to-the-soul eye contact with each and every passenger on the airplane. Sixty upturned faces were framed against the black wall of my consciousness: the whimpering man with the rosary, the apologetic smoker, the jittery-eyed cocaine couple, the lonely woman in the last row of seats the previously uncooperative gentleman who'd probably kill if we instructed him to do so. Some sat quietly, others prayed out loud. A few cried softly in their seats.

I squeezed hands, patted shoulders, gave verbal encouragement to those who seemed to need it most. After strapping into my jump seat, I exchanged a look with the female flight attendant seated beside me. What was her name again? Where did she grow up? How many children did she say she had?

We had flown together for the last 14 hours, yet most of her conversation had prattled into one ear and faded, like so much elevator music, in some forgotten recess of my mind. I wanted to ask -- no, I needed to ask a hundred questions about her life.

But as her hand closed around mine, as we skimmed the tops of San Juan's high-rise apartment buildings, as the airplane wheels kissed the runway and my heart tried to leap from my throat, I realized that by simply holding my hand, my colleague had answered the most important questions. Yes, I am as scared as you. Yes, we're here for each other when it really counts. And hell yes ... that was a close one.