After a decade of playing second fiddle, Little Miss Sidekick finally gets lucky. Will we still respect her in the morning? 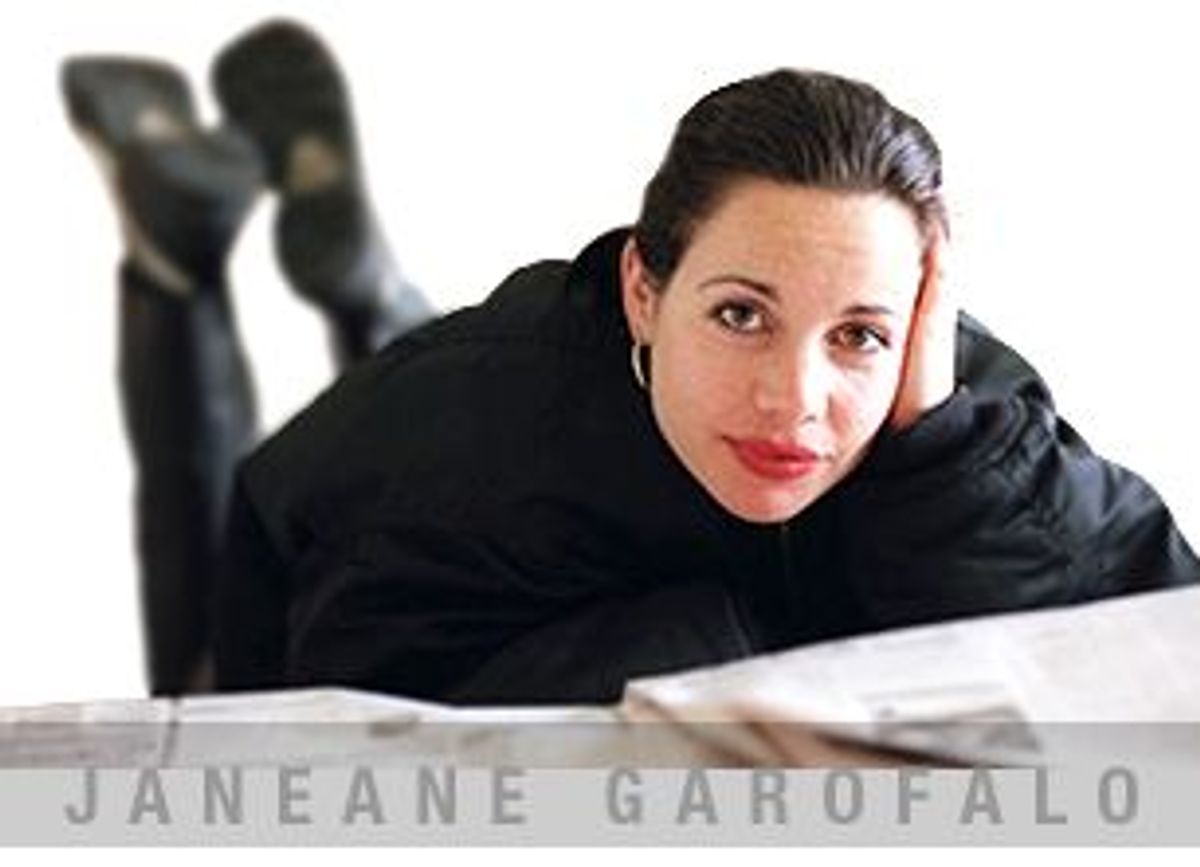 No, I'm not a crazed stalker with pictures of her taped to the insides of my cabinets who is freaked out because she changed her hair or something. Heck, judging by the fact that I can hardly remember half of the movies she's been in, I'm not even a legitimate die-hard fan.

But I do like Janeane, as an actress and as a person -- well, as a persona, anyway -- and that's why I'm worried about her recently announced deal with HBO to star in her own sitcom. Although I'm excited at the prospect of ingesting regular televised doses of Garofalo -- her new show will likely push me to finally subscribe to HBO -- it's difficult to imagine her carrying her own series. She's unquestionably capable. (Hell, if Norm Macdonald can have a prime-time network presence, Garofalo certainly can.) It's just that she's always been more Elaine than Jerry, cracking us up from the sidelines and leaving us begging for more.

It's her seemingly infinite number of roles as the sardonic second fiddle that gives me that impression: She's played everyone's tough yet sympathetic best friend. Garofalo is the perennial outsider. Her humor is based on her being just left of the center of attention. This is a woman who named her production company I Hate Myself Productions. We can identify with her.

Garofalo is the perfect antithesis to every sleek, self-absorbed actor around. By that I don't mean she's ugly or disheveled, as Joan Rivers and her toadies implied at the 1996 Emmy Awards -- stinging criticism that later made Garofalo cry -- but rather that Garofalo is less of a superstar than she is a regular-person-star; and this persona is so powerful it literally affects the way we see her. Garofalo, a beautiful woman by most standards, is routinely cast as the "ugly duckling " to the point that her "ugliness" has become part of her act and we've bought into it while not really buying it.

So can she successfully shift into the direct spotlight without losing the qualities we've come to love about her? Garofalo has always played a supporting role, it seems, even when cast in the lead. "The Truth About Cats and Dogs" and "The Matchmaker" aside, most of the 30 or so films she's been in feature her in what the academy deems "supporting" roles. And still she usually manages to steal the show.

And just as in her off-screen life -- she's done everything from co-authoring a book with Ben Stiller to performing stand-up comedy -- her roles are diverse. Consider some of her TV performances: She was the grown-up daughter of the Buchmans on the final episode of "Mad About You"; she played Jerry Seinfeld's perfect opposite-sex match Jeannie Steinman on an episode of "Seinfeld"; she was a correspondent on Michael Moore's "TV Nation"; and she appeared on the ultimate ensemble show for comedians, "Saturday Night Live," for less than a year (leaving because of what she called its sexist culture). Currently she appears as Felicity's unseen confidant, Sally, who communicates with Felicity via tape recorder.

Garofalo got her start on TV ("The Larry Sanders Show" and the now defunct "The Ben Stiller Show"), and her film roles have not deviated much from the persona she perfected there. When I saw "Dogma," I was thrilled but not surprised to see Garofalo in a small cameo role as an abortion clinic worker who snipes at protesters on the clinic's lawn. In "Mystery Men," an otherwise bland film, she yanks attention from the ensemble cast with her inspired ad-libbed conversations with her father's bowling ball-encased skull. The same holds true for her work in the wonderfully dark "Clay Pigeons," where she plays a jaded, wisecracking FBI agent reminiscent of Frances McDormand's character in "Fargo." It's in these roles, opposite other strong actors, that she shows off her wit and ability.

The premise of the HBO show still remains undetermined, and as the powers that be piece it together, maybe they'll craft the perfect role for Garofalo: one that accentuates her biting wit and wry personality but that keeps her from being the redwood in a forest of shrubs. The best way to do that would be to surround her with other highly talented actors; it's clear she thrives on the challenge.

Although Garofalo never appears on screen in "Felicity," it doesn't change the fact that her role on the show is also representative of the persona she's crafted for herself. We've yet to actually meet Sally, Felicity's high school French tutor, so we only know her voice as she shares her experiences with Felicity and gives her subtle yet pointed advice about life. This is the kind of role Janeane Garofalo is known for, a too-perfect metaphor for her 10-year career. Without ever appearing on screen, Garofalo is the lead character's Jiminy Cricket, supporting Felicity but helping the often lost college student find her way.

Garofalo isn't even listed in the credits, despite the central nature of her character: Most episodes begin with Felicity narrating recent events to Sally (via her ubiquitous tape recorder) and end with Sally's reply. The first episode opens with Felicity moving across the country on a whim to attend college. It ends with Garofalo's Sally affirming Felicity's decision to remain in New York: "I just want you to know, I think you've made a really great choice," Sally says. "And I can't wait to hear what happens."

Ditto for Garofalo and her new series.