Melissa, David and me

Why does lesbian motherhood need the blessing of a "father"? 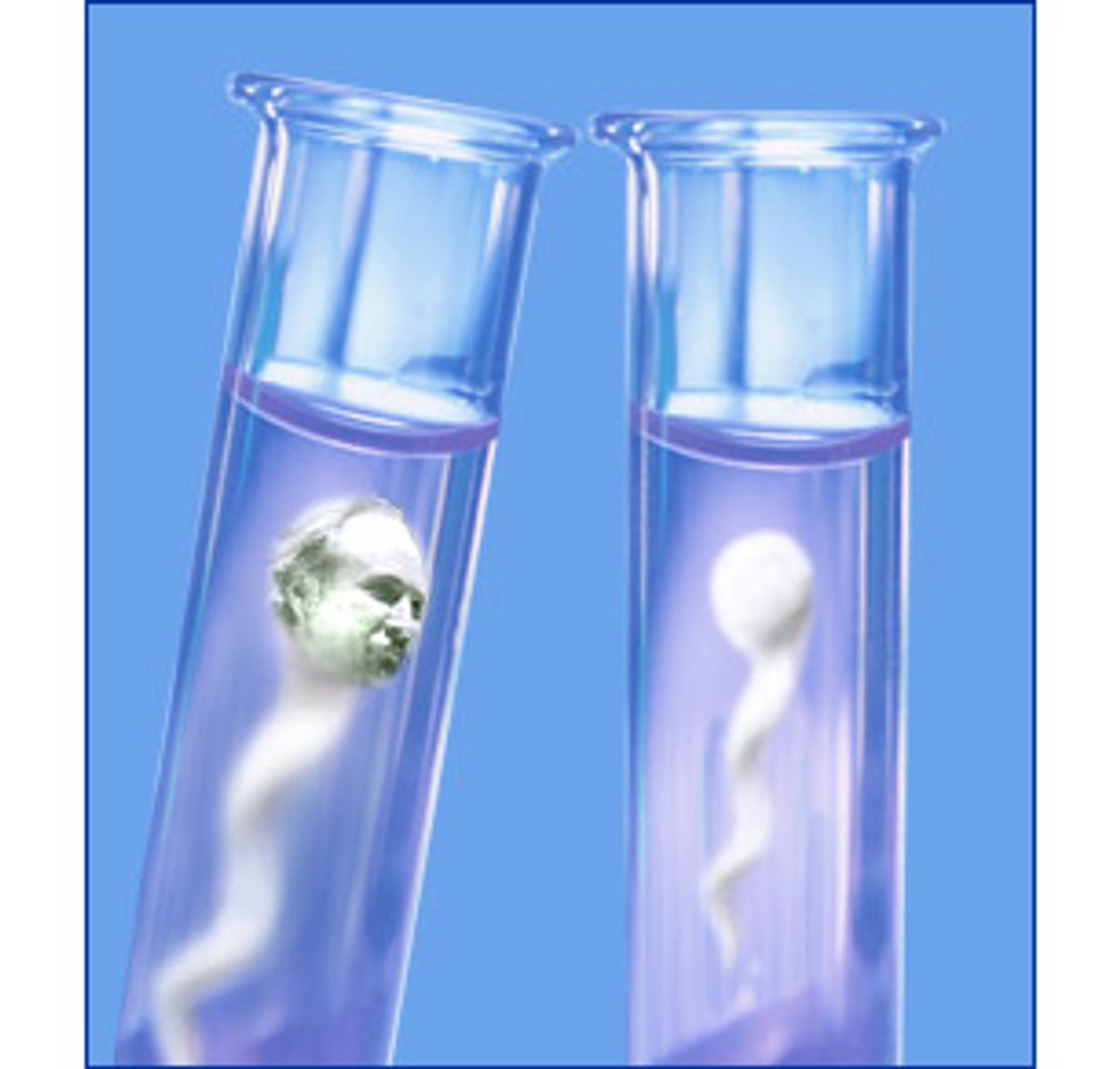 I am a nobody. I am an untenured professor, an author of one book of interest to few and the writer of columns no one reads. I am of average height and average looks and I am not rich. But recently I was touched by greatness, or the closest thing to greatness this culture has to offer: People magazine called. Yes, the People magazine wanted to know about me, Jane Nobody.

But what sort of weight does a nobody lesbian mother give this story? After all, David Crosby did not donate the sperm for my children. (At least, I don't think he did. The thing about using an anonymous donor is you really don't know who the donor was. Perhaps it was someone even more famous than David Crosby. Perhaps it was someone much better looking, like Jude Law or Ralph Fiennes. Then again, I doubt that the men drawn to Repro Sperm Bank are of the terribly famous or even good-looking sort. But you never know.)

I can only assume that no-name lesbian mothers such as me are contacted at a time like this because we lend authenticity to the rather preposterous idea that women, especially women like Melissa Etheridge, are reproducing without the presence of actual men (alternative insemination being more akin to a blood transfusion than a sexual liaison).

Of course it is also true that this is a story about celebrity and sex, which is to say it is a story that none of us can resist. After all, if Melissa Etheridge had revealed her donor to be a hard-working accountant from Cincinnati or even an anonymous vial of sperm, People magazine would not be salivating to write the story and we would not be clamoring to read it. Instead, Melissa E., with a flair for the dramatic rarely seen among us lesbians, kept a big secret for years and then publicly told her secret.

And yet, drama aside, I can't help wondering why she decided to tell. After all, David Crosby is not the kind of sperm donor I would have chosen. When I scanned the sperm bank profiles for potential donors, I do not recall seeing one that read "Age: 50-ish. Height: Below average. Weight: Over. Hair: None on top. Major medical history: Liver transplant due to extensive drug use."

Call me picky, but I would not have chosen such a donor, not at $500 a shot. Of course Melissa Etheridge probably got the sperm for free, or at least at cost, and besides, she apparently believes things like musical talent are genetically transmittable. There's no scientific evidence of the sort, though there is some evidence that substance abuse might have genetic roots, but I'm not going to be the one to tell her that she didn't get the top quality stuff.

I do realize that it's easy for me to feel superior. After all, I have no idea who donated the sperm for my children. I do know they were young, had hair, and had not had liver transplants. In my imagination, the donors are incredibly good-looking and intelligent young men who see it as their feminist duty to help women reproduce without men in the room.

Once, at a dinner party, an anthropologist conducting research at a sperm bank told me that the secretaries weed out obvious losers from the donation process by telling them that the bank is "full up." I was thrilled. It gave some credence to my ridiculously optimistic assumption that my donors were not nose-picking, spittle-drooling crackheads. Here was scientific evidence that a chinless guy or someone with track marks up his arms would not be allowed to donate sperm.

But then again, I don't really know that. And it doesn't really matter. If I really believed that biology was the determining factor or even a very important one in reproduction, then my children would have a father. Instead, I, like Melissa Etheridge and so many other women, chose to have children with a donor. But unlike Melissa, I prefer to keep the donor a secret, even from myself.

Maybe she should have kept her secret too. After all, the Crosby gene pool isn't exactly worth writing home about. There's also something a bit disturbing about telling the world something that she once deemed secret or unimportant or none of our business. And there's something a bit too scripted, a bit too Disney, about the way the disquieting elements of Melissa's motherhood are made right by the appearance of a "father." True, Mr. Crosby is not a dashing prince, but he is famous, talented and rich. With his appearance, the heterosexual union and the primacy of biology are restored and everyone can live happily ever after.

Yet even if Melissa Etheridge's revelation plays into the ridiculously heterosexist and biologistic assumptions of our society, I'm glad she did it. Otherwise People magazine wouldn't be calling a nobody like me.