When you journey unattached on a train to Vienna, possibilities soar. 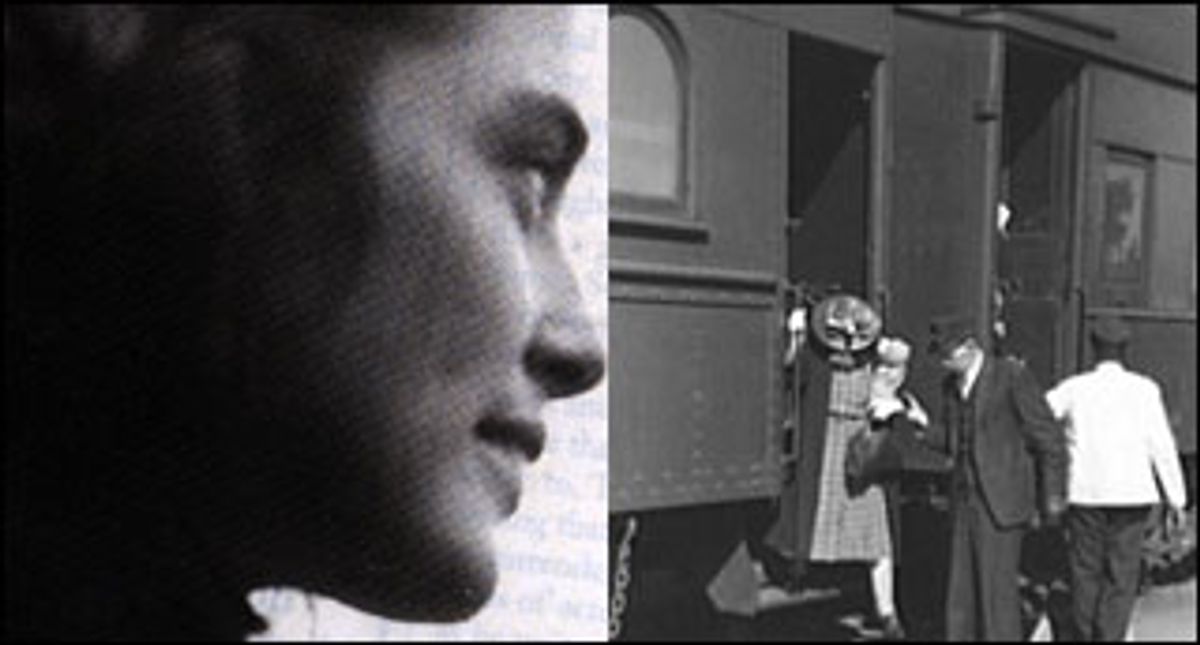 The conductor who places his hand under my elbow as I step up into the train has such dazzling eyes that I have to lower mine in case he reads them too clearly. A few years ago I wouldn't have minded. Now I do. Very much.

I reflect on this as I find my compartment, open the minute bottle of Campari and contemplate the white sheets on the turned-down bed. It's not long after midnight and I've been waiting under the airy arches of Florence station -- Firenze Centrale -- for over an hour. One of the most perfect hours I've ever spent. Totally alone and totally unafraid, on Florence station waiting for the night train to Vienna.

As a child, I hated "Florence" -- it was the name of a battalion of old women in rusty black dresses, and most of all the name of that pious nurse, Florence Nightingale. I hadn't realized then that the glory of Florence had so affected Florence Nightingale's parents that they'd named her after the city. And I hadn't realized that the pious nurse lived up to her name by being one of the glories of her century. Possibly because she was single.

I slide into my crisp bed. Single women have so much more time to organize, to think -- to live by just pleasing themselves. Perhaps when you have only yourself to please you become the best possible version of yourself.

The handsome conductor wakes me just as I've drifted to sleep. He needs my passport, which, naturally, I can't find because I'm too flustered standing with my coat thrown over my elegantly indecent nightdress, wishing I were 20. Say what you like, but desire is so unseemly after a certain age.

I've discovered two crucial things about myself and travel over the past three years: I only like traveling alone and I am crazy about train travel. Not just any train -- I'm crazy about those luxurious beasts that sleek their way between the major European cities. Sitting in the end cars, there's a beautiful satisfaction in watching the curve of the engine and the front cars as they round a bend. It's living in a perfect déjè vu -- I'll be doing this again in a second, I think. And I do.

I always travel first class, although I can't really afford it. "First class?" my Genevan friends gently queried as I bought the ticket. "So expensive!" Meaning, so unnecessarily expensive. Yes. But some expensive things are necessities. It's not exactly about snobbishness -- more a pragmatic need for comfort and cleanliness. But most particularly it's about the people I meet there.

Coming up from Geneva there was the slender German woman whose English was as fastidious as her clothes. She'd learned it in England before the war. She had been visiting her friend, Isolde, in Geneva -- a journey she makes every year at this time. They'd been friends at school and used to spend their summers walking in the mountains. Now they were too old to walk but they still spent some weeks of every summer together. The seriousness with which the Europeans take summer used to amuse me. Now it impresses. My fellow Australians are far too casual about their easy weather.

Between Geneva and Brig, the woman and I shared a bottle of white wine and I discovered that she had known Jung, bought her exquisite green suede shoes in Geneva in 1959 and been in Berlin all through the war. She got off at Brig to catch her connection home and waved to me as my train pulled out. I never found out her name. As I raised my hand to her, I had a vivid picture of Anna Karenina -- the Garbo version -- and I remembered that Anna met Vronsky's mother on a train. When I was 16 I wanted a lover like Vronsky.

Train travel is a way of tricking time. There's an other-worldliness to having endless time -- as one does in a train -- in a world otherwise obsessed with having no time at all. There's great satisfaction in this, and in not being responsible for anyone else. No husband, no children, no dogs, no cats, no garden. Just me, an undomesticated creature full of high ideals and infinite hopes.

Walking through the shoulder-crunching streets of old Vienna, having an iced tea at the bar in Cortona in the lingering autumn night, sitting at the end of a pier in a tiny fishing village on the coast of Denmark, flying downhill on a bike in the Austrian countryside and sitting at night in an Italian station waiting for a train to carry me off into the dark to wake up somewhere new, I become a young woman again. Ecstatic about the possibilities of the world in ways that generally belong to youth.

Being alone in a new place makes me feel more authentically myself than I've felt for years. It's a feeling that remains even when things are not going well, as they were not when I was in Copenhagen. Having escaped a week of un-air-conditioned heat in Copenhagen, I settled into a modest hotel somewhere along the coast of Denmark. An acquaintance dropped me off and said he'd pick me up in a few days. No one, not even the waiter in the hotel, spoke English. And I, alas, had no Danish.

I sat finishing a half bottle of warm Danish champagne -- entirely appropriate for the fish and vegetable curry served with tinned pineapple rings on top. Danish rock music thudded somewhere in another room and several women who looked like women out to giggle from anywhere in the world were giggling at the next table. The tables all had blue linen cloths, pale enough to blend in that calm Danish way with the sea and the sky, which I could see through the window, stretching out in flat lines. The curtains were the same pale mauve, pale aqua and blue linen. Danish, tied back with twine.

In the sea sat an island with a house on it and I wanted to know who lived there, but without the language nobody could tell me. The hotel garden was scrubby, unmanicured, so un-Australian it shocked me for a thoughtless second. The outside umbrellas had fallen across the dirty pavement and no one had bothered to right them. There was a feeling of settling into autumn as the summer was about to finish for good in that too-hot year.

I felt no response at all to the country. There was nothing of the energy I felt in Austria, Italy or Switzerland, the places to which I always return. Later that evening, I walked out along the long pier and stood beneath the tall mast of a red and blue wooden yacht and watched some young boys diving. What was it that struck directly at my heart? There was some pain, yet real exultation watching these golden children dive off into the black water and clamber back up glistening like seals, laughing, urging one another on, throwing their heads back and shaking the water from their bodies in arcs of silver that caught in the last scrapings of the sun. I remembered what that was like. I remembered that charged sexuality and the certainty that life would go on like this. I adored them as much as I hated them.

In a Viennese restaurant last year, reading alone, I was joined by two young women. They were lovers. One, with her shapely head under cropped blond hair, was heart-stoppingly lovely. They'd driven up from Cologne for the weekend and were sleeping in their car. What should they most see in Vienna? they asked. The Klimts, I said, unhesitatingly, adding in my most teacherly way something about how all the desire, eroticism and hope of youth is in those splendid icons. And of course, you'll enjoy the imperial grandeur of the Belvedere Palace, too -- it'll put you in context, I added, fairly sure that they'd take me humorously, not pedantically.

I don't sleep well on overnight trains, because I am always too excited by the prospect of arrival. I've finished my croissant and coffee by 6:30 and lean my forehead against the window watching the suburbs of Vienna come into focus. I see people in cars and on bikes waiting at level crossings; the children, early for school, often wave. Sometimes I see into private back gardens, see the dog ripping around the lawn, watch the clothes flying on the line. Evidence of lives being lived outside the train, outside this silver and blue capsule that tears through the countryside and snakes less conspicuously through suburbs that I will never properly see. Pictures from an exhibition that I'm to glimpse just once in my life.

And I'm thinking of Vienna, of my pension just behind St. Stephens, of the old, old woman who stands at the cash register in the coffeehouse nearby and who has not even one word of English. This afternoon I'll visit the clock museum, surely the maddest museum on earth run by a bunch of anal retentive enthusiasts perfectly in tune in the city of Freud. Or I might not visit it at all. I have to answer to no one but myself. The train slows as it gets closer to the center and my heart beats faster. And it hasn't just to do with the conductor with the dazzling eyes.