There are always dark doings in the Sunshine State. 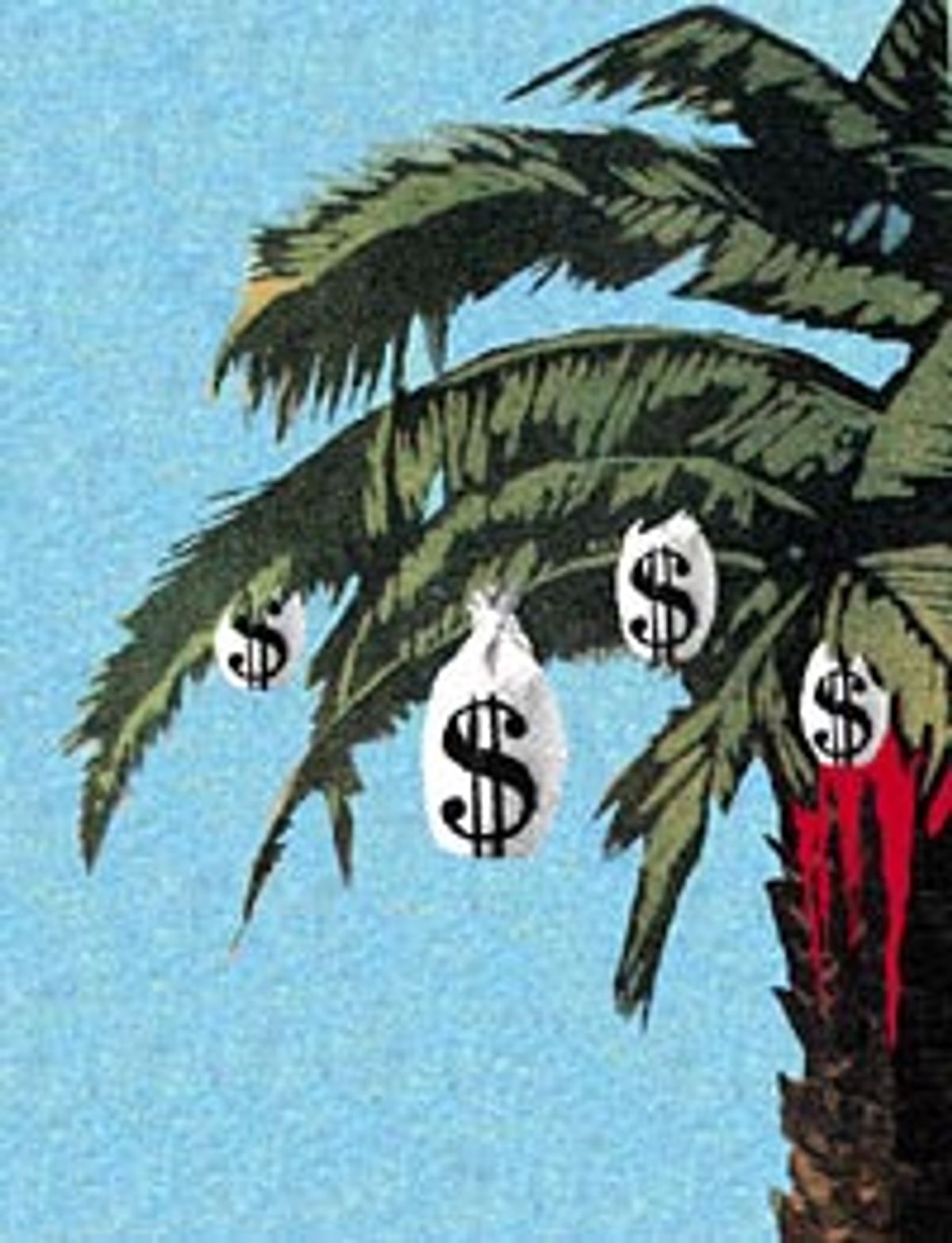 Florida is a restless state. You'd think that with all that heat everyone would just sit down and relax for a while, but no, the spot is teeming with transients. It is one of America's principal foyers. It is home to those who have no home. The recent controversy over the residential status of poor Elian Gonzalez, the 6-year-old Cuban boy whose mother died trying to reach the United States, is a natural symbol.

It is fitting, then, that the plot of Thomas Perry's latest Jane Whitefield novel, Blood Money, begins in the Keys. I can think of no more successfully restless writer than Thomas Perry. His heroine, a sort of walking, talking witness-protection program, moves people in peril into new lives. To elude the various killers who are always on her and her charges' tails, she flies and drives many different planes and cars all over the country, constantly adopting and discarding clothes, credit cards, hair styles and habits. Identity itself is in flux, as she takes apart the personae of those in danger and formulates new ones. She establishes safe houses, transfers funds, then plays the innocent until she can smash a trunk lid down hard on a limousine driver/criminal's head. She tricks someone on every other page, never repeating herself. In Whitefield's world, there are far more than 50 ways to leave your pursuer -- in the dust.

"Blood Money" introduces a super-accountant for the Mafia called Bernie "the Elephant" Lupus who has been kept a virtual prisoner in a secluded compound by a beach for years. After he fakes his death, he and his young housekeeper end up with Whitefield. Lupus has been keeping in his head records of investments for the major New York, Pittsburgh, Boston, New Jersey, Chicago and New Orleans crime families, and he is now the only one who knows where billions of dollars of mob money is. He and Whitefield, with the help of a fellow who has similarly fantastical financial skills, plan to give the money to charity, which is, of course, a lot more complicated than it sounds.

I love the Jane Whitefield books, and "Blood Money" is as fast-paced and readable as any, but it is, unfortunately, not quite up to the high standards Perry has led us to expect. His mistake is to spend too much of his narrative time with a capo named Delfina, one of the many mobsters whose money is being given away. Unlike the other families' operations, Delfina's is scattered across the United States, and he and his men move constantly. Although his analyses of situations are sophisticated, they often sound like pale versions of Whitefield's. As the "Godfather" and "Goodfellas" era melts into the "Sopranos" sunset, you've got to give us more than that.

Outcast, by Jose Latour, starts out in Cuba and ends up in Miami. To be more specific about how this shift occurs would neutralize the first of the many about-faces that the plot takes. Latour is a Cuban crime writer who still lives in Cuba, but "Outcast" is written in English. The combination may be what makes Latour sound so authoritative about both shores.

His hero, Eliot Steil, is the product of a Cuban mother and an American father whose business kept him in Cuba for a while and whose obsession with a shrewd, coldhearted Cajun later kept him away. As the book begins, Steil the son is working as an English teacher in Havana. There he appears to be a bit of a sad sack, but when he reaches Florida, he turns out to have many Felix Krull-like qualities; presumably the United States releases them in him. He is soon getting ahead thanks to deals with one corrupt cop and various criminals, all of whom come in handy when he tries to figure out why an American stranger would have come out of the blue to kill him before he reached the States.

Latour's tone is fascinating. Crime novels tend to be either moralistic or hiply amoral with a satiric or leering edge. Latour's vision is amoral, but matter-of-factly so. To him it makes perfect sense that a man who would become an English teacher in Cuba would become a thief in Miami. And Latour's criminals may not have hearts of gold, but they don't go around killing or double-crossing one another, either. They're businessmen -- very curious (and persuasive) Cuban versions of what businessmen must be.

The one drawback is all the detail about the characters' pasts that is not essential to the plot. There is really too much of it for genre fiction. But the prose is surprisingly smooth. It is Latour's dispassionate eye, not his language, that gives him away as a foreigner.

In the '80s, when drugs and immigration problems convulsed Miami, Edna Buchanan was famous for her police-beat coverage in the Miami Herald. In her 1987 memoir, "The Corpse Had a Familiar Face," she described interviewing a woman who became sexually excited as she stabbed a Miami Beach retiree 56 times -- and as she went over the details later in loving detail. Although the interview took place in prison, Buchanan was shaken by the killer's sexual advances.

She creates a similar character in her latest Britt Montero mystery, Garden of Evil. Halfway through the book, serial killer Keppie Travis takes the Edna Buchanan-like Montero hostage and proceeds to drive up and down Florida, enticing and then shooting men, painting her nails and guzzling tequila without apparent ill effect, talking about herself and her feelings all the while.

Buchanan has become a much more facile writer since her memoir, which manages to persuade amply despite lurching along to choppy newspaper rhythms. You cannot come away from it without suspecting that she may be the coolest, toughest person who ever lived. The mystery feels hollow in comparison. There are a couple of splendid scenes -- one in particular when Travis and Montero listen to a traffic helicopter's fitful coverage of the police pursuit of their car. It may be the most bitingly accurate (and funny) depiction of that kind of journalism I have ever read. And clearly Buchanan knows her female psycho killers. But the broad outlines of the plot could have been lifted from a TV show, and the killer sometimes sounds a bit too much like another female character in the book, Montero's down-home brassy photographer friend. Some might say the one offsets the other. To me it looks like not enough colors in the palette.

The characters in Christina Garcia-Aguilera's A Miracle in Paradise are, by Floridian standards, remarkably stationary. But the Cuban-Americans' keen sense of displacement suffuses the book. Lupe Solano, the private investigator who has also appeared in Garcia-Aguilera's other three mysteries, is tapped by a local mother superior to investigate reports that a certain statue of the virgin will shed real tears on Cuban independence day. This event is supposedly going to have deep political repercussions, none of which are made very clear.

The plot of the book and Garcia-Aguilera's discussions of politics share a similar murkiness. They manage somehow to be both rudimentary and perplexing, which is too bad. The Cuban-American variety of right-winger is an interesting one, and I'm sorry I didn't get a better look at a few.

At one point Solano reveals that her sister, who is a nun, wears a bra and panties from Victoria's Secret under her dark-blue habit. It is hard to tell what to make of this information. Although Solano's tone is wry, her statement does not seem to reflect a broad church lady-type humor. She is very Catholic, and her satire is limited. She says early on that all Catholic clergy can assess a person's bank account at a single glance, a statement that may be amusing but also can be seen as literal. So are nuns actually allowed to have charge accounts at Victoria's Secret these days? Or if that's a bit much, maybe Bloomingdales? Solano doesn't seem to be criticizing her sister for irreverence or self-indulgence. Nor does she seem to be congratulating her on her rebelliousness. Perhaps this is just another case of mindless consumer humor, with no more meaning than an advertisement has.