Puffy was there, and the Goo Goo Dolls, and I almost ran over Kurt Loder. But everyone was working. So, all of a sudden, we missed the lame party with the imported transvestites. 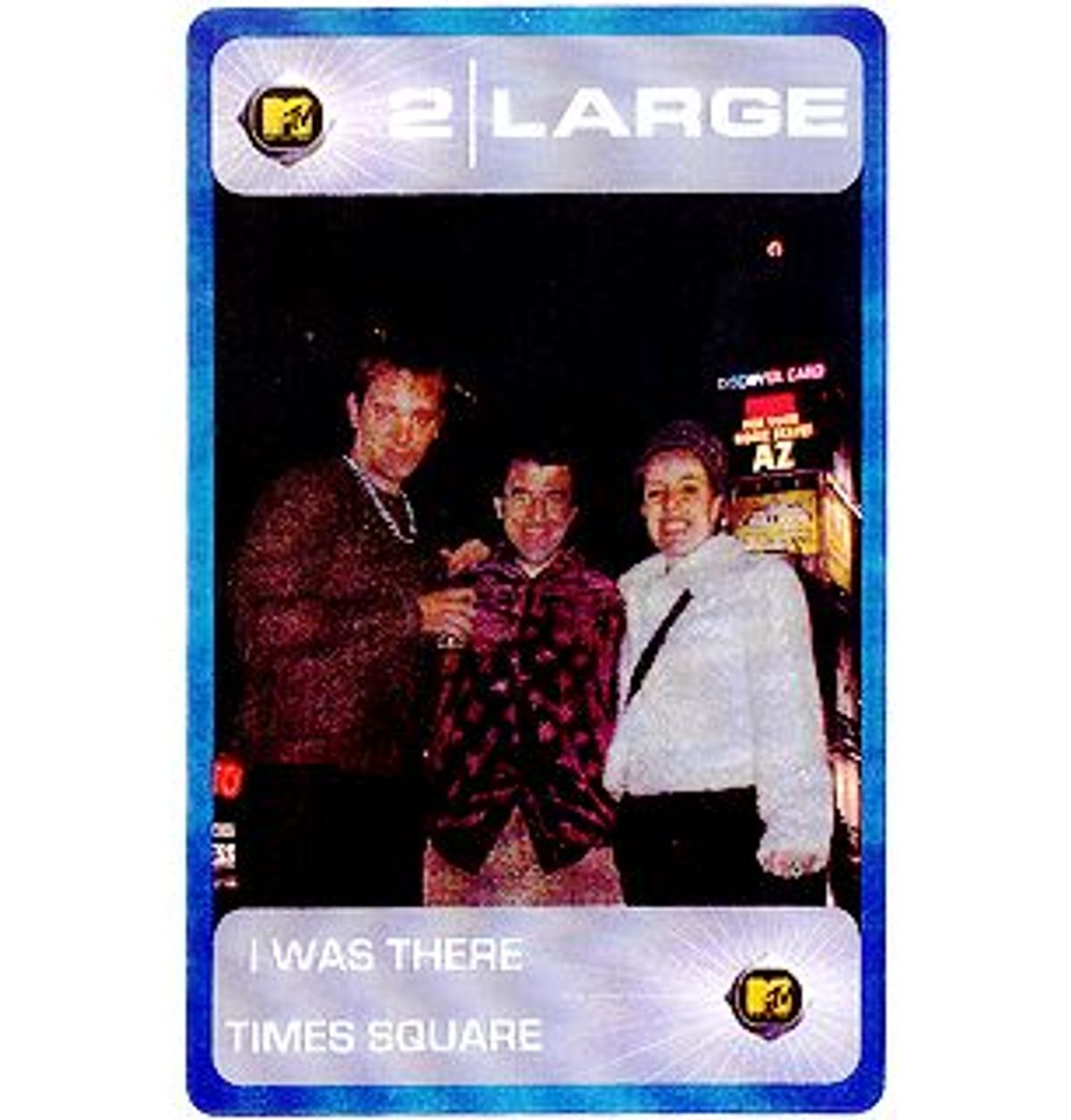 Let me just warn you that this letter may be a scramble as my brain is deeply entrenched in Neal Stephenson's "Cryptonomicon,"
a book that can best be described as "head-explody." Ostensibly, it is a tale of the serious business of code breaking, primarily during the Second World War. But it is also sending feelers down into my mind and tickling the nerd center. Lots of number-play with heavy use of coincidence and primes. I'm spinning.

But that all seems boring when I have tale to tell of Al Yankovic (aka "Weird" Al, although he has since dropped the "Weird"). Have you kept abreast of VH1's winning series "Behind the Music"? Despite being (basically) the same story again and again, it is quite good. A band gets together, usually in the '80s. They get big. Then they get really big. Now it is the early '90s. Parties and chicks and drugs and excess. But inevitably the bottom falls out, always around 1992. Narrator: "When we come back: In 1992 the bottom falls out of Mvtley Cr|e's rock 'n' roll fantasy." In fact, the segment of the hour-long show from 30 to 45 minutes is called the POF, or "Price of Fame," segment. The exacted toll usually includes, but is not limited to: overdose, death, betrayal, divorce, institutionalization, wrecked cars, jail time and loss of limb. The final 15 minutes, however, mark the band's return -- Present Day.

What does this have to do with Mr. Yankovic? Well, Al's "Behind the Music" has no POF section. He is a pleasant, fun, nice, courteous, soft-spoken guy who graciously accepted club sodas from a drunker and drunker host (me) at our Christmas Party. I just got lit and pushed club soda on him hoping he would finally get pissed and be un-nice in some way. Nope.

So then I moved to David Spade's dad, whose name is Sam Spade. Apparently, he and the son have a rocky past but have come to understand each other in some way now. And so here is Sam at the home of Hollywood badboy Trey Parker, looking especially diminutive against the background of Trey's colossal Steinway D. I introduce myself and make it clear that I am the guy to ask if he needs anything. Sam is grateful and puts his hand on my shoulder.

"Do you know my son?" he asks hopefully.

I met Spade the Younger at a private party in some bar on Melrose, I think, just down the street from Denzel Washington's restaurant, Georgia, where a bunch of us had gotten logy on fried chicken. David and I have a mutual friend in Pam Brady, who at the time was writing for David's show "Just Shoot Me" and who now writes for both that show and "South Park." David shook my hand and told of how he had been on George Clooney's list that fateful Christmas when "The Spirit of Christmas" began making the rounds.

This was about a month after Chris Farley had died, and I'd read the short piece David published in Rolling Stone about not going to Chris' funeral. He simply could not resign himself to it. I mentioned the piece hesitantly, but with sufficient gravity, in order to compliment his honesty. David was receptive and gracious. We went from looking in our drinks to looking at each other. We didn't start making out or anything, but it was clear we were at the threshold of a real conversation, which parties like these generally preclude.

With this much talent in the room, the starfuckers were out in full force, including this chick I met by the bathroom who had gone AWOL from the Army and wanted me to tie her up and do naughty things to her. She was a friend of a friend of a friend whom I vaguely remembered seeing duck into one of our limousines earlier, and now, two hours later and with no contact in between, she already has her hand pressed against the goods. Clearly an amateur, she went for the writer.

So this is just the brand of woman you expect to fling herself headlong in the middle of your nice, quiet conversation, and as I'm hanging out with David I am doubly sure it is coming.

"Yeah, I met David before," I tell Sam. He seems pleased.

There is another David among us, David Cross, whom I met at the premiere of the third season of "Mr. Show,"
which David does with Bob Odenkirk. Bob is also here, but he and David maintain a conspicuously antipodal separation throughout the evening. Not from any ill feelings, but because of how much time they already spend together. I've seen it happen with Matt and Trey.

With Bob in the kitchen, David's at the opposite end of the house in my room, sitting on my bed with Tom and several other friends of mine, and they are improvising a pretty funny tune about being gay. I stumble in after they've begun, and without a point of reference, I feel I have only two options: leave, or get my camera and take pictures.

I still haven't developed the roll -- I have a few more to snap. But in thinking back on that night, I remember inviting one girl after another to sit in my desk chair and pose for a picture. I was feeling typically saucy, but I don't remember being at all lurid about asking to take the pictures. It was pretty matter-of-fact. However (and I will have to develop the roll to be certain), I distinctly remember the uncrossing of legs and the primping of cleavage.

The Christmas party did not unwind itself completely until about 6 Sunday morning. Trey and I said good night. He wished me a Merry Christmas and said, "We showed them, huh?" which not only summed up that particular night, but the year we had in general.

Word has gotten out about us. Our reputation preceded us at the Spearmint Rhino last weekend, and Russell Crowe, whom Trey just met at the Los Angeles Film Critics Circle Award ceremony, said he heard we could party and wanted to find out firsthand. In fact, he's coming over tonight. I'm nervous for several reasons. I've seen "L.A. Confidential." This guy's a badass. He gained 50 pounds for "The Insider," then turned it all into muscle. He smokes like a chimney, and I'm sure you could snap an ashwood baseball bat on him as you would on a chimney. WE'RE GONNA LOSE!!!

But we didn't lose on New Year's Eve, and that's all that counts. Trey, Pam and I went to the MTV party in Times Square. Trey and Pam both worked with Brian Graden at Fox and now Brian heads programming for MTV. So we had the "in," but Trey was nervous we'd end up at some lame party for production assistants while Brian rocked the house with all the celebs.

And that's kind of what happened. After our retina scans were approved by security, we gave our names at the front desk and were assigned pink wristbands. Brian, however, was assigned a yellow wristband and got necklaced credentials. This suggested Trey, Pam and I were going to be smack in the foyer of lame mansion, high on lame hill, at the end of lame street.

Things took a turn for the worse when Brian veered off our general course and announced he had to go to work and we should go up to the party ahead of him.

I ordered a Tanqueray and tonic to ease the suffering only to find out hard liquor would not be served until 9. Great. So the three of us sipped our Coors Lights and dreamed about next New Year's.

But then we had an idea. What if we said screw it and got really oiled RIGHT NOW! Yay. So we got things rolling along immediately. I tipped the bartender $20 and that took care of the 9 o'clock rule. In fact, by 9, we were tight.

That's just about the time Brian rolled back around and offered to take us down to ground zero where the live show was being shot. Puffy was there, and Goo Goo Dolls, and I almost ran over Kurt Loder. But the floor was frantic. Everyone was working, and so all of a sudden the lame party with the imported transvestites seemed like home.

By 11:30 we're gone. Wasted. But they want Trey to help give away spaces on the balcony. So he and Andrew Shue are up on the makeshift DJ stage. Trey's announcing numbers in Cartman's voice, slurring them horribly. It's fantastic. Pam and I simply beam at each other. It's fucking New Year's 2000. Wooooo! Trey calls Pam's number. She's too obliterated to act. We push up the stairs, but she simply stands at one end staring at her hand. Mr. Shue comes over and puts the wristband in her hand, closing her fingers around it for her. Pam has left the building.

Finally, the big moment comes. The countdown hits 10. I am a wreck. Here we go. 3-2-1. Two million people erupt below us and the sound rockets up through the skyscrapers that pen us in. Because our balcony is back from the edge, we cannot see anyone below; we only hear them, which is eerie, but I'm not sure why yet. Confetti falls from somewhere. It blanks out the night sky, and I feel enclosed. Then it hits me. I'm standing in a great cathedral and listening to the choir, but from around the corner. I cannot see them, but hear and share in their ecstasy. And so much light is pouring up and being reflected off the confetti that it is as bright as day. So my mind finds the confetti, despite its chaotic randomness, strangely gentle. And because I feel I'm standing in a morning snowfall, my mind interprets the crazy loud chaotic and unpredictable circumstances as rather calm. Am I fucked up or WHAT?!! WOOO!!