A conversation with Errol Morris

Eating a reality sandwich at the Carnegie Deli with a connoisseur of the ironic, the naive and the appalling. 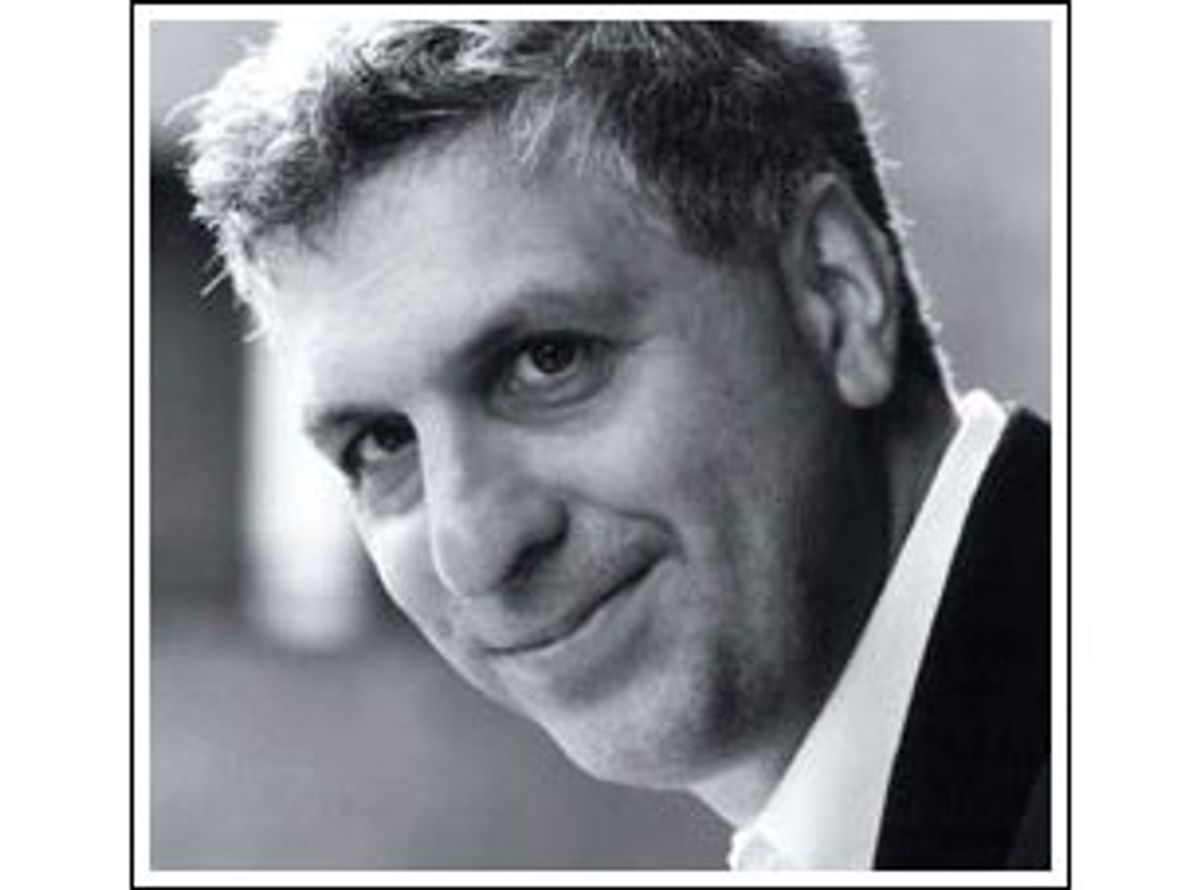 In his films "Gates of Heaven" (1978) and "Vernon, Florida" (1981), Morris investigated the stories behind two pet cemeteries and a community of eccentric swamp-dwellers, respectively. In his 1988 film, "The Thin Blue Line," he focused on the case of Randall Adams, a Texas man wrongly convicted of murder. With "A Brief History of Time" (1992), Morris adapted Stephen Hawking's book about the origins of the universe. And his 1997 project, "Fast, Cheap & Out Of Control," was the study of a topiary gardener, a lion tamer, a mole rat researcher and a robot designer.

His recently released documentary, "Mr. Death: The Rise and Fall of Fred A. Leuchter, Jr.," is the semi-tragic story of a diminutive, pocket protector-wearing man (Leuchter) who designs execution equipment for prisons across the country. Leuchter's world comes crashing down on him when he becomes affiliated with the Holocaust denial movement.

As with his other films, in "Mr. Death" Morris dissuades viewers from making hasty assumptions about his chosen subject. While the absurd historical revisions Leuchter proclaims about the Holocaust are gently but emphatically rebuked, Morris patiently pursues the bigger issue at hand: Fred Leuchter himself. How has this delusional man, fueled by 40 cups of coffee a day, become totally convinced of his own infallibility?

Recently, I arranged to meet Morris at the Carnegie Deli in midtown Manhattan. When he arrives, he emanates intensity and quickly proves to be nearly eccentric enough to appear in one of his own films. I ask if meeting him at the Carnegie was a bad idea and he smiles broadly.

"I used to live on 54th Street between Broadway and 7th, which my wife called the 'deli district.' We lived over the Stage Deli," Morris says, gesturing down the block. Pregnant pause. Bad memories of pastrami? I ask. "Well, it's not as though someone holds up a pastrami sandwich and I cower in the corner and beg for mercy ... but it's close to that."

As we're seated inside, I make some lame excuse about the Carnegie's central location being its primary asset and feebly offer a contingency plan. Morris launches into a Carnegie Deli monologue. "On one of my last visits here, it occurred to me that it must be the site of a number of unpleasant episodes. You know: thrombosis, coronary infarction -- you name it. So I asked a waitress, 'Have you ever seen anyone die? You know, just slumped over their six-pound sandwich dripping with fat. I mean, have you ever seen anyone just fold over into their plate of food?'"

"And she said, 'Not really, because they usually make it out of the restaurant,'" Morris says, suppressing laughter, "and they get as far as Smiler's [a New York convenience store chain], going for the antacid, before they keel over."

In the spirit of the moment, I offer a few "Why I don't eat at my local delicatessen" stories, one of them involving a bloody Band-Aid in a sandwich, which has Morris smiling with approval. Finally, having exhausted the topic of deli gore, I segue to one of Morris' other obsessions: mass murders. He brightens immediately.

"I started interviewing murderers when I was at University of California, Berkeley," he tells me. "That's, in fact, how I met Werner [Herzog, the film director]. I was interviewing Ed Kemper in Vacaville. Do you remember Ed?" he asks cheerfully, as if Kemper were a mutual friend. I say I'm familiar with Kemper's work. (The California serial killer was convicted of eight counts of murder in 1973.) "I interviewed Ed Kemper a whole bunch of times," Morris continues. "He fascinated me. Werner was really quite taken with Kemper as well. And, unfortunately, he then got the mass murder bug from me." After a long pause, Morris adds, "A lesson for all Jews, never tell a German your deepest innermost secrets."

I introduce the subject of Ed Gein and Morris' close personal relationship with the ghoulish grave robber turned murderer. It was back in the late '60s when Gein turned "women into furniture," as Morris delicately puts it. He was so taken with Gein's bizarre series of crimes that Morris dropped out of the doctorate program in philosophy at Berkeley to relocate to Plainfield, Wis., the killer's hometown, and moved in with Gein's next-door neighbors. "I liked Ed," Morris states calmly. "There was something incredibly naive about him. Maybe that's something I just like or have an affinity for -- the naive and appalling." It is a quintessential coupling that succinctly sums up most of his films.

Morris shifts his weight and leans slightly forward. He has something remarkable to say and he's making sure I'm ready. Our brief discussion of Gein has led us to the bedrock of Morris' approach to his craft. I set down the complimentary kosher pickle I'm eating. Morris begins.

"I was taken to the Wisconsin crime lab to see the [Gein] artifacts, and at the time I was still kind of a graduate student of philosophy, dogged by one of those perennial, philosophical questions: What is real? It's the ontological question." Morris pauses for dramatic effect. "One of the guards at the Wisconsin state crime laboratory at that time gave me one of the most compelling definitions of what is real. He took me into the room of Gein artifacts and pointed to the cane chair where Ed had removed the cane and sewn in the buttocks of a woman. And without any trace of irony the guard looked at me and said, 'You can tell it's real, because you can see the asshole.'"

I'm relatively stunned, but Morris marches on. "So, when anyone ever asks me about my films or whatever -- is it real? Somehow that definition flashes through my head."

Of all Morris' films, "Mr. Death" most effectively weds the question of what is real (asshole and all) with the naive and appalling. I ask Morris about the film. He responds rhetorically, "What have I done here? I've provided a fractured fairy tale. The story of a man who, hoping for the best, created the worst. Alas, Fred is my best attempt yet to plumb the greatest mystery of all ... the mystery of personality. What in the hell goes on down there?" Morris laughs, ruminating on the possibilities.

"You know, I don't even know if I'm being coy ... I get the 'What's it about?' question endlessly. Who is Fred? Is he a bad guy? Is he an anti-Semite? Is he misguided? Is he evil? Well, you can decide for yourself whether I'm self-deceived on this issue," Morris is laughing. "I think there is something chameleon-like, something almost evanescent, ephemeral. It's very hard to get closure on the question: Who is this man?"

Our food arrives. Morris isn't hungry and he's in a hurry. He gets a toasted bagel and tea and continues pondering "Mr. Death" and what is real. "Here you have this crazy character right out of Nabokov," Morris says, referring to Leuchter, "the totally clueless narrator. He makes Humbert Humbert look like someone with intense self-knowledge." Morris laughs. "You know, I've read a lot of reviews where I've been criticized that somehow I should have provided closure, that I should have plumbed the details of Fred's history -- defined, perhaps, that one illustrative event that would make everything come clear. It's that fantasy picture that will identify the evil at the heart of the man; the imagined desecration of a Jewish cemetery ... or a synagogue on fire." He is laughing again. "But," Morris proclaims, "it's not there."

As I eat my sandwich, Morris describes one of his favorite scenes in "Mr. Death" in which Fred Leuchter, electric chair designer, straps himself into his own execution machine. "I think it's really hard to find a triple irony," Morris remarks. "You know, as a connoisseur of irony, double ironies are good to come by, triple ironies are really good to come by."

I say that the bits of archival footage used in "Mr. Death" have a forceful, lingering quality all their own. Morris agrees. "There are certain images that you see and somehow it's very, very hard to take them out of your head. They remain in there and it's like a chicken bone caught in the throat."

Morris' use of such footage -- staged shots and reenactments, among other stylistic embellishments -- has been the source of controversy among documentary film purists. I admit that I have a bit of an ax to grind with the overrated, overfunded Ken Burns, who seems to be the only documentary filmmaker acknowledged by mainstream America. "I'd like to grind an ax against his head," Morris shoots back.

Morris has no shortage of opinions regarding the use of reenactments, which appear most notably in "The Thin Blue Line" and some of his more recent films. "Often we like to reduce documentary to journalism and we like to feel secure about journalism -- that we're not being tricked or betrayed or swindled or lied to. But no one really worries about it that much as long as it's being presented in the right idiom. As long as it looks real, people are delighted. But what the reenactments do in, say, 'The Thin Blue Line' is provide this wealth of visual contradiction. They're never illustrations of what I think the world is. They're illustrations of lies. They're all ironic. They, hopefully, teach you how images can't embody truth." Morris is smiling again.

"How's that?" he asks abruptly.

It's fine, I tell him. He then informs me that if any of what he's been saying sounds too pretentious, I should tell him to stop. I appreciate the offer, but remind him that our interview is nearly over. I go with the standard closer and ask what we should expect next from him. He tells me about his upcoming Bravo series, "First Person": "I'm interviewing people for the show this week. Hey," he exclaims, "got any ideas for the show?" I suggest Mae Noell the gorilla woman and Hasil Adkins, the backwoods rockabilly legend, but it's time for Morris to go to another appointment.

And for me, as he prophesized, it's time for an antacid.