Managers of the flesh compete for pimp of the year at Chicago's annual Players Ball. 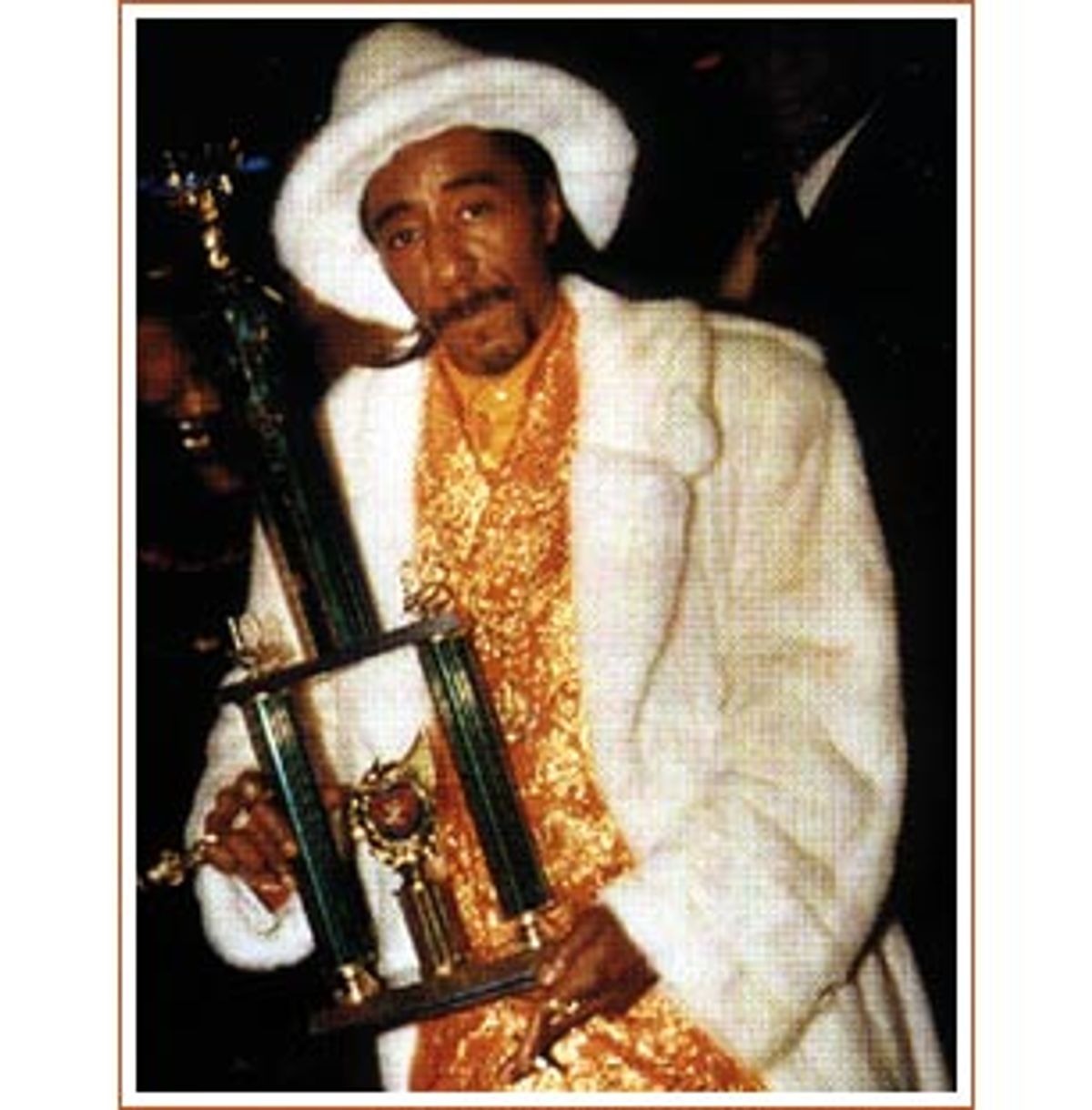 Don Juan was born to pimp. The Chicago dandy always had a way with the ladies. Girls at school handed him their lunch money and, after graduation, their welfare checks. "Growing up in the inner city, my role model wasn't no doctor or no lawyer," he explains. "Either I was watchin' some pimp come out with three girls or I was watchin' a dope dealer get into a fine automobile. I tried to work, but it just wasn't in my blood. I considered the pimp game a great trade because I didn't like going to jail. I'd rather send someone else in my place."

Don Juan is one of hundreds of men attending the Players Ball, Chicago's annual gathering of pimps and their stable of prostitutes. The party has been a November tradition since 1974, when bell-bottomed macks or pimps, from Milwaukee and Chicago, first gathered to celebrate Don Juan's birthday with drinking and dancing. "The Players Ball brings people together to recognize that pimpin' is hard work, despite what the public thinks," Don Juan rasps in his whiskey-stale voice.

"The ball appreciates the blood, sweat and tears it takes for a guy with a third-grade education to be driving a Rolls and wearing diamonds." The event, billed as an international competition although foreigners rarely show, is always held at a Chicago nightclub and it is a party, not a pageant. There is no onstage parade of pimps in crushed velvet evening wear, no macks strutting in Speedo swimsuits.

Since Don founded the ball, it's probably no coincidence that he was pimp of the year for 13 consecutive years. The voting process is scientifically arbitrary: A month before the ball, Don and his cronies meet for drinks and argue over which mack made the most money and the biggest name for himself that year. "The criteria for winning is what we call the 365-day-a-year workout," Don explains. "It's all about activity: your bankroll, what kinda car you drive, did you buy a big house, lemme see your jewelry."

Flashy homes, clothes and jewels are how pimps flaunt their success and lure more prostitutes to their stable. "Being named pimp of the year is based on how well you are known and respected, how wise you are to picking up the tricks of the trade," Don adds. "It's like the Academy Awards: If you win, you get more girls, your light be able to shine." To punctuate his words, Don waves cigar-fat fingers weighted by diamond knuckle-dusters that spell "Magic" and "Juan."

In order not to bruise a pimp's peach of an ego, there are many categories: If you're not "No. 1 International Pimp of the Year," you might walk away with a trophy for being a "No. 1 Super Player" or the "No. 1 Boss Player."

At the November 2000 ball, a millennial mack will be chosen. It may be someone like Scorpio, who was pimp of the year in 1998. It's incomprehensible that this doe-eyed, candy-voiced man is a pimp; he looks like he should be liberating dolphins trapped by tuna nets. How can he be pimp of the year, next to a shark like Good Game, who looks like he was conceived in a Caddie and teethed with gold-capped incisors.

Scorpio may not be the sharpest-dressed pimp -- his orange and gold paisley lami suit looks like it was stitched from Howard Johnson drapes -- but he's a harbinger of the new millennium, a politically correct pimp who eschews whips and hangers, yet manages to keep his women in pocket. "Ain't nothin' I like better than a happy hooker," Scorpio purrs to his stable of six girls. "Long as you're happy, I'm happy."

Pimps eyeball at the ball, passing out business cards like candy. The first rule of the pimp game is: Don't let your woman look at another pimp. "Because if she look at another pimp and she like him, your money stopped," explains Pimpin' Ken, a 34-year-old college-educated mack from Milwaukee who majored in business and sociology. Ken also likes to brag about having a Ph.D. in Pimpin' Ho's.

Pimpin' Ken claims that history justifies his job; prostitution is the oldest profession in the world, he says. But a historical precedent of slavery, as these African-American pimps should acknowledge, does not make slavery acceptable. When they talk about their girls, they believe in free will, saying, "She chose me; no one's forcing her to do this." But when it comes to their own careers, pimps believe in fate. Their disenfranchised youth is to blame; they had no choice but pimping or dealing drugs.

Scorpio is considered a "gentleman pimp" for his hands-off approach. Then there are mother pimps, who coddle the girls, and dope fiend pimps, who inoculate theirs. A whore's job is to break a pimp down, Ken says, and a nagging prostitute makes a pimp beat her. "But you can only beat a person for so long," he adds. "I tried, but it wasn't easy to jump on someone and then sleep next to her. When I look at most women, I have to consider my mother and the love that I have for her; if it weren't for that, I'd probably be just as cold and callous as other pimps."

Now Ken is into space-age pimping, where the philosophy is that a woman stays because of choice, not force. He has to control a woman's mind without physical abuse by selling her a dream. "Besides," he adds, "if you beat a woman and destroy her face, how can she get your money?"

A "godfather" is the mentor who befriends a greener pimp, and Don learned from a craggy man nicknamed God. "I don't think a pimp should be a role model," God confides over the craps table. "But they are on Chicago's West Side."

God no longer hustles and Don claims he retired from pimping in 1985, after he found the Judeo-Christian God during a PCP-induced haze and a televangelist show. Now he's "Bishop Don Magic Juan" and ministers to "the outcasts of society."

And while he wouldn't have won a humanitarian award during his pimping career, the Don says his girls were treated with respect. Instead of calling them bitches or ho's, he called them by their names. Don concedes it was a tough love approach. When a girl got out of line, if he had to reach between her gap to see if she had his trap [money stash], she got a whoopin'. Implements varied from a hanger, whip or pimpstick, a gilded cane pimps like to carry. If she was very bad, the girl had to stand in a tub while Don poured alcohol on her cuts or rubbed salt into them.

"If a woman stood up under that, you knew you had a good thoroughbred that was ready for the track," Don snarls. "You got to have a woman that no matter what, she want to see you on top, whether she has to spend 150 years in jail.

"I had a girl got shot in the thigh and she went home, tied her leg up and went straight back to work. Another girl got shot five times, I get to the scene and the girl says, 'Daddy, I want to get up from here so I can go get your money.' Her momma said, 'What have you done to my daughter?' I didn't do nothing, that's dedication."

Such tales are chronicled in his autobiography, "From Pimpstick to Pulpit: it's Magic!" It's a roller-coaster read of a life steered by Don's magic wand, which plums Dionysian depths before the Holy Spirit uplifts him.

Don Juan glides through the ghetto in his green and gold Rolls Royce sipping Mokt on the rocks from a plastic cup. The Don dresses and decorates in green and gold (green for the money and gold for the honey his women sold). During Don's prime in the late '70s and '80s, his home dripped green and gold carpets and drapes. Toilet seats were made of clear glass and lined with $50 and $100 bills. His poodles Don and Juan sported colored fur and his women, the Juanettes, were branded by "Property of Don Juan" tattoos. Don dyed his beard yellow and the Juanettes were famous for Sharon Stoneing their golden bushes. But those were glory days.

"Dope is the new pimp," many of them growl. Some pimps were forced into early retirement because their women left them to work for drug dealers, who drove Lamborghinis and Ferraris instead of Cadillacs.

The party is tame compared to prior years when bods built for speed performed Thai bar-girl tricks. Later, during a motel after-hours party, the birthday boy will have his dancing girls. For two nights and a day, there is no sign of Don Juan but a greasy stack of room service plates and the buttery sound of Al Green from Suite 1619. Then one morning a woman peeks out, a giggling tart in lemon gown, flaxen wig and gold-dusted lids. In the Econo Lodge parking garage, the Bishop and his queen board their magic carpet and fly from the ghetto, far from the projects where he was born. Don Juan flutters farewell with a diamond wave and flashes a 24-karat gold-capped grin.