Any Given (Super Bowl) Sunday

Director Oliver Stone talks about his days on the field, why defensive calls are ruining the game and his favorite Super Bowls ever. 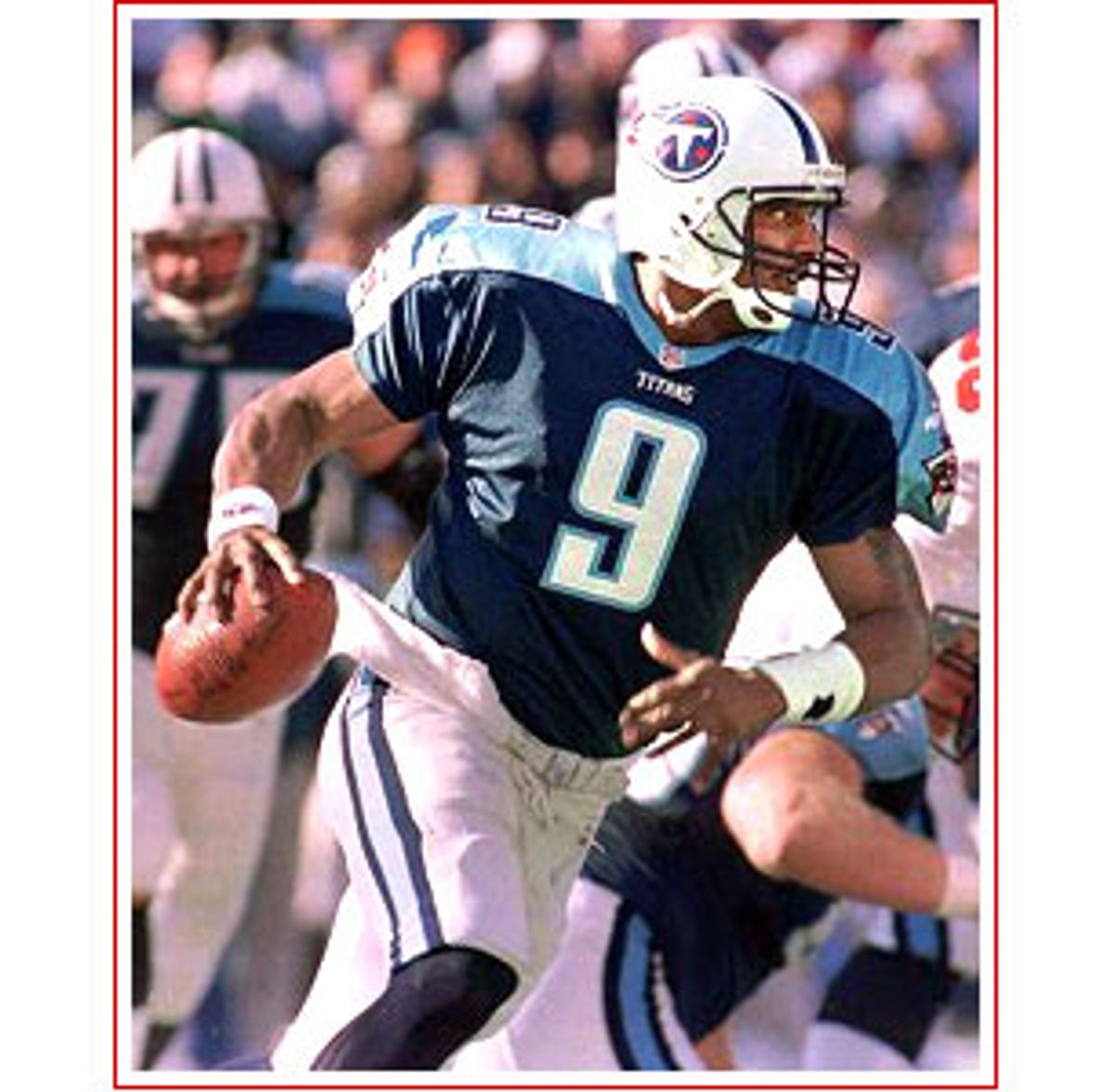 There are two visions of the game of football in Oliver Stone's "Any Given Sunday." In one, the game becomes a metaphor for everything that is wrong with America -- racism, wanton violence, the commercialization of just about everything. In the other, football is an almost mystical repository for everything the director seems to believe in -- tradition, courage and self-sacrifice.

With Super Bowl Sunday dead ahead, Stone talked about a lifelong love-hate relationship with the game, including his (not-so-glorious) playing days, the evils of TV timeouts and a Super Bowl bet he wishes he'd never made.

This season in the NFL was particularly brutal, on and off the field. We saw nine stars go down with serious injuries, a player pushed a referee to the ground, another was accused of murdering his pregnant girlfriend. Is this a vision of the future of the game?

I think this has been going on in the NFL all along. What's happened is the media fishbowl got too fast for them. I mean, also you might add that Cecil Collins for the Dolphins got in trouble, breaking and entering, but this has been going on for years in the NFL. When we researched [for "Any Given Sunday"] and found out about this stuff, [the NFL] got very sensitive about that issue, especially domestic abuse situations. But that is the nature of aggression. Aggression is required to play the game. Sometimes it leaks over into the rest of life -- not in everyone. Guys have been fighting with refs for years, players have fought each other. Now, if anything, it's become more civilized.

What are the two things that most irk you about the game these days?

Defensive [pass interference] calls. I think it's impossible to be a defensive back and guard against the pass. You can easily give away 40 or 50 yards for a nothing push, with just a glancing blow -- not anything that interferes with the pass receiver in any intentional way. They have been calling a lot of that over the season. I think it's appalling that you can get 40 or 50 yards on a call.

Yeah, that's what's different about the college game: You only get 15 yards.

It changes the game. That's one of the things that really annoys me. The second thing is commercial timeouts. The intrusion of commercials is bullshit. It's part of the whole commercialization of American culture. As Jim Brown was the first to point it out to me, how many times have you seen on TV a team march down the field and get to the 20 and they take a TV timeout? The whole stadium goes quiet, waiting for the television commercial to play out, stretching the game out. The team has lost its concentration, as well as its momentum. It's a shame. The game has changed.

Who was your team growing up?

Where did you grow up?

Don't ask me, it's just the Giants got so much attention. I always liked the other guys. They had that million-dollar backfield: Y.A. Tittle was the quarterback; Hugh Perry was the fullback; Hugh McElhanny was the broken-field runner; John Henry Johnson was second halfback -- he was also a pass catcher. He was a hell of player.

Did you ever play in school?

Sure, I played at Trinity. I was a left halfback. I was in the defensive backfield as well; we played both ways back then. It was really an hour game back then: back and forth. Now with all these TV commercials it's a three-hour game.

Where you any good?

Very good. But then I went from the Trinity school in the eighth grade, in the ninth grade to the Hill School in Pennsylvania. The coach there was a knucklehead who transferred me to fullback without ever giving me a tryout as a halfback. That happens to a lot of kids in sports, which is what I hate about coaches.

So at an early age the powers that be were out to get you.

Oh, yeah. They got me. They do that with a lot of kids. Bad coaching.com, it's everywhere.

Any great achievements on the field?

Not really, we mainly lost. We were not the world-shakers. We were a small team, but we were fast, and we had some talent.

What does the game do for you now that other sports don't?

I like that it's a team sport, that you have these 11 guys in the huddle all looking downfield together. It approximates the conditions of war, in a purely abstract sense of a team unified trying to gain land against another team. It has a very primeval feeling to it.

The uniforms, the helmets. I love the helmets. When I was a child they reminded me of the Greek helmets, of the Greek and Trojan wars. That's part of the thrill a young boy feels toward it. I remember putting on that helmet and feeling like a superhero as a kid.

When you were in Vietnam were you able to follow the game?

No, I pretty much lost track, the reports came in so sporadically. I missed the Namath-Unitas Super Bowl, which was too bad.

Do you have any great Super Bowl memories?

My best Super Bowl memories would have to be the Dolphins and the 49ers over time. I loved watching Miami. They were wonderful to watch, like the Niners in the '80s and the '90s. Whenever the Dolphins got the ball in those two seasons -- they had that one unbeaten season [1972], every time they got the ball the first series they scored -- they marched down the field like a machine. No one could figure out a way to stop them. They could pass, run inside, run outside. Don Shula was a genius, and he ran that team, I guess you could say, like a war machine.

So the Dolphins wiping out Minnesota in the early '70s, the 49ers beating Cincinnati with that catch [1989 Super Bowl]. I love them beating Denver, 55-10 [1990]; that was wonderful to watch. I love them beating the Chargers[1995]. And more recently, in terms of tension, the Packers being upset by Denver [1998] was exciting. I loved that game. That was the most exciting single Super Bowl I have seen in a long time.

Basically, like most people, I love the underdog thing -- that makes it happen for me.

Where were you for "The Catch" [49ers quarterback Joe Montana's last-minute touchdown pass to Dwight Clark to beat Dallas in the 1981 NFC Championship Game]?

I didn't see that. I was in Italy writing "Scarface."

What was the most exciting thing about this season?

Well, it's funny. The Niners collapsed; bad management -- really bad management. I gave up early with them. The most exciting things about this season were the Rams and the Colts, the emergence of the Titans, the Jaguars -- all the underdogs have come up this year. Especially the Rams -- Kurt Warner is amazing -- and the Colts. It's a whole new ballgame. I think Parcells turning around the Jets was great, and this kid Ray Lucas was amazing. I mean that's what happened in our movie. I have always been a fan of Charlie Batch in Detroit. I wish he could have some better luck.

I love the idea that Barry Sanders could retire this year and everyone was predicting disaster this year for the Detroit Lions, and they did all right. It goes to my point that it's the no-names that win it -- it will always be a team game.

I love Doug Flutie. I love the idea of the little guy coming off the bench.

You spent a lot of time with old-timers like Jim Brown making your film. Do you get the sense the game has changed a lot since his day?

I mean, they used to play with no face guards. Bob Sinclair told me about a time he lost his front teeth. He was rushing a punter. The punter kicked his teeth out. No call. The play was over and he was down on the ground looking for his teeth, and he couldn't find them and the ref was saying, "Come on, Sinclair, you want to call a timeout?" He said no, got back behind the line and kept playing.

Sinclair told me when face guards first came out most of the guys were against them. It was this thing of honor, this macho thing. It's amazing there weren't more injuries.

Well, it might have something to do with the fact that today they are 250 pounds of pure muscle moving at 4.6-40 speed.

Yeah, it's all relative, I guess. Now they're much more specialized. Now you have these huge linemen. I wanted to do a shot at one point, a sort of "Natural Born Killers" thing, with Jamie [Foxx, who played the quarterback in "Any Given Sunday"] dropping back in the hole and a big cartoon dinosaur with a football helmet coming at him. That's what I think it must feel like.

Do you ever bet on games?

I bet a lot when I was in my 20s. When I was a struggling screenwriter doing odd jobs I gambled as much as I could. In fact, I gambled more than I could. I was borrowing money from the Beneficial Finance Company, which in those days was charging 25 percent interest on the money, a month -- that's a lot. So I was paying purses of $10,000, $12,000 to these bookies. I was losing more than I was winning. In the '70s it was more of an open gambling atmosphere, there were more of sporting bet sheets out. Even the New York papers used to run all of the lines. Then I won on the Super Bowl. I predicted Miami would slaughter Minnesota. I took the points. But being the last game of the season, the two bookies didn't show up -- they disappeared. They closed up shop. I had bet the house on it, I lost out like $15,000.

I saw the bookie on the street a couple of years later, and I felt like going up to him, but he was big, and he looked like a real Mafia guy, so I didn't want to go mess with him. [Laughs.]

You have kids. Do they play?

I have two sons and a daughter. My older son learned a lot of discipline this year. He's 15 years old, offensive tackle for the junior varsity, going up to varsity. Although he played Little League quite a bit, he prefers football. It's the first team he's been on where he has felt like he's part of a team. He takes great pride in it. It's given him a sense of selflessness, as well as confidence, and courage. It takes courage to play.