Violence studies is mobbed by students clamoring to shred "Pulp Fiction" and analyze suicide. But is this nascent field just intellectual rubbernecking? 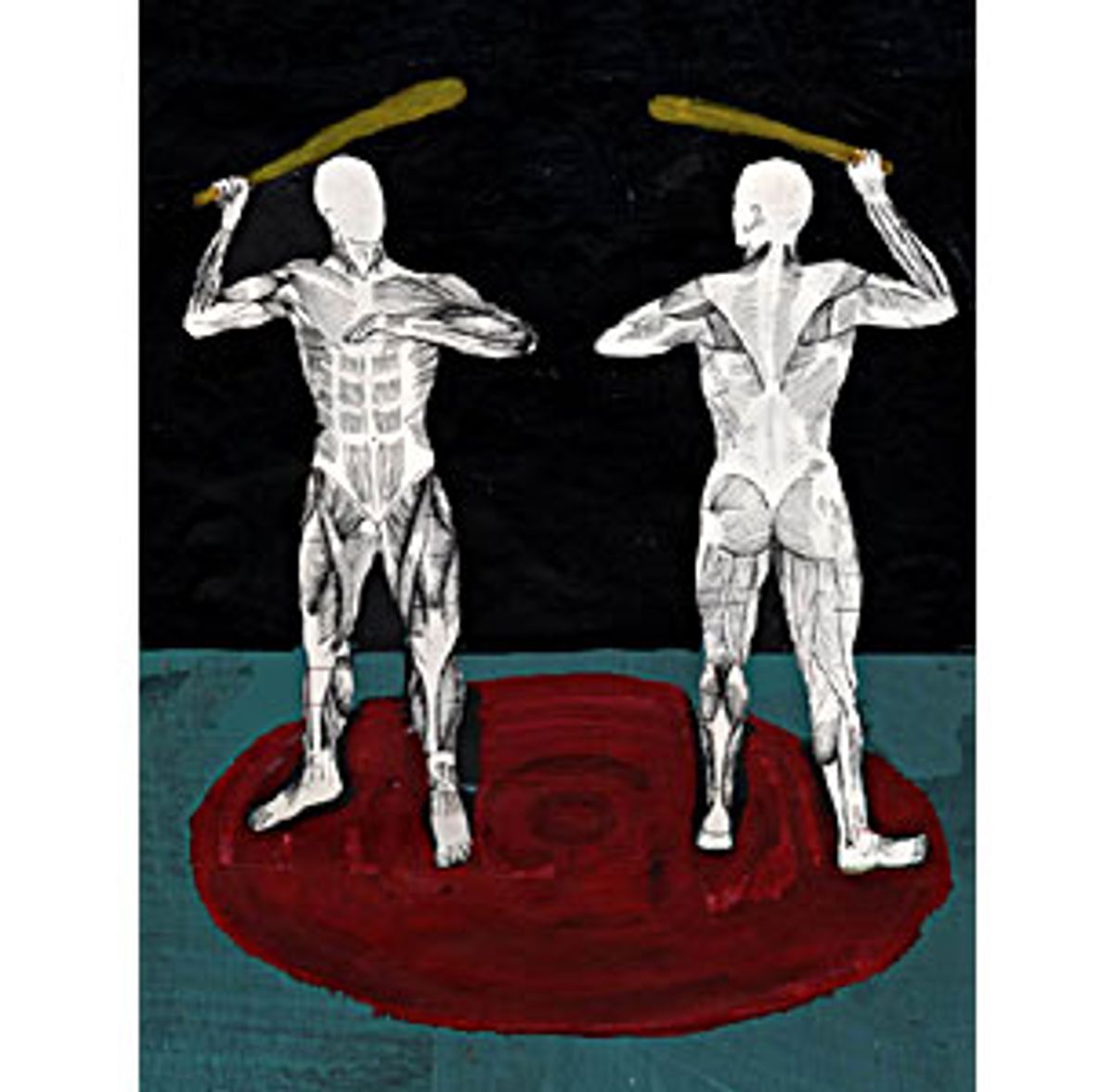 The description of anthropology-sociology 201 seems innocuous enough, tucked into the course catalog between a class on "Coming of Age" and one called "Ways of Knowing."

The course begins with an examination of the universality of violence and humankind's ceaseless fascination with it ... Topics include: war and warriors; industrialized violence; ethnic and racial savagery; violence in the name of God; political violence; terror; honor and violence; sexual violence; criminal violence; and self-destructiveness.

The course (called simply "Violence") is a new one at Williams College and on the cutting edge of curriculum change in higher education. American universities have discovered violence -- not as a rallying point for take-back-the-night marches or an occasion for lectures from campus security, but as the subject of serious academic scrutiny.

Williams, in Williamstown, Mass., is one of at least a dozen colleges around the country that introduced courses on violence in the last year or so. Several universities have even instituted full-fledged "violence studies" programs that undergraduates may take as a minor. Though still in its earliest stages, the emergence of this field reveals much about the state of the university -- and the state of American society.

One of its most passionate advocates is Michael Bellesiles, a brash young historian at Atlanta's Emory University. He came up with the idea of violence studies four years ago, "over a bottle of wine" with Arthur Kellerman, head of emergency medicine at Emory's medical school. As Bellesiles recalls, "We were having dinner one night and fantasizing about what a perfect program for undergraduates would look like."

And it looks pretty grisly: lectures on rape, genocide and guns, supplemented by readings on lynching and terrorism and screenings of "Pulp Fiction" and "The Matrix." Starting in Violence 101, "Introduction to the Comparative Study of Violence," and on through "The Causes of Crime and Violence" and "Violence in Film and History," students are encouraged to look at history, arts and sciences through a single lens: the infliction of injury and death.

The 3-year-old Emory curriculum has become a model for other universities, and the Williams course may be developed into a multimedia program available to other universities. But the success of violence studies has been controversial: Can it really tell us anything useful about the violence that plagues our nation? Is it just a cynical attempt to garner grants and attract students with an edgy-sounding premise? Might it replace real learning with mere titillation -- the academic equivalent of rubbernecking?

There's no doubt that the new discipline relies on the unfailing ability of violence to draw a crowd. Classes on serial killers and cult suicides will always beat out calculus and chemistry, as the full rosters of violence studies classes attest. The enticements of violence are sweet enough to persuade students to swallow less palatable subjects. "I wanted to use a theme that I knew students would find interesting to teach a classical kind of curriculum, one that would open up doors into many different historical epics, different kinds of literature," says Robert Jackall, the sociologist who devised the Williams course.

Sometimes, however, the judicious use of this "theme" can give way to lurid sensationalism. That's what happened in Emory's case, according a review by the Harry Frank Guggenheim Foundation, a think tank devoted to studying aggression. According to Karen Colvard, a senior program officer at the organization, the Emory readings were "too subjective, full of unexamined assumptions and strikingly unrepresentative of most of these crimes. These choices seem calculated to heighten the emotionalism with which students approach these issues, which can get in the way of rational understanding." Bellesiles disputes the organization's conclusions, but acknowledges that refraining from sensationalizing violence "is in some ways the core problem for an academic talking about the subject."

Though they may occasionally make use of its salacious appeal, the promulgators of violence studies do have a more sober mission in mind. They're out to understand violence and its causes in a way that parents concerned about their kids, and politicians concerned about the next election, never could. "Who else ought to be doing this?" demands Jack Levin, sociology professor at Boston's Northeastern University and director of its nascent violence studies program. "Are we going to leave it up to the government? We've done that, and what have we gotten in return?" he snorts derisively. "The V-chip!" Only academics, he argues, have the breadth and depth of knowledge to attempt such a wide-ranging investigation.

And indeed, the scholarly approach to violence yields some interesting insights, the first of which is the realization -- at once reassuring and dispiriting -- that the violence afflicting contemporary America is hardly an aberration. "When you read the Iliad and the Agamemnon and Tacitus and Livy all within the space of 12 weeks, suddenly you begin to get a very clear sense of the universality of this phenomenon," says Jackall. "Columbine didn't just happen out of the blue. We're talking about repeated patterns in human history."

A more dispassionate view of events like Columbine might help us comprehend them more fully, he suggests. "All the endless hand-wringing and pop-psychologizing that goes on about these incidents doesn't add a great deal to our understanding of the phenomenon itself," Jackall reasonably points out.

An objective and open-minded approach to violence may also help us avoid easy labels of "us" and "them." The study of the physiological and psychological bases of aggression, which many violence studies classes take as their starting point, makes clear that the capacity for violence resides in all of us. "It's important that we tell undergraduates about how violence is done by ordinary people, in ordinary times, to other ordinary people," Colvard emphasizes. "It's not simply a matter of the bad guys doing things to the good guys."

Beyond the content of violence studies, there's a lesson implicit in its very existence. Why, when violence has dogged humanity since its earliest days, is it only now becoming the exclusive subject of scholarly attention?

Inevitably, academic politics has played a part. Universities under pressure to justify their high tuition are trying to open their doors to the "real world." The humanities, eroded in influence and prestige, are making a particularly insistent bid for relevancy. Interdisciplinary study, for a long time little more than a buzzword, is beginning to muster the requisite resources and coordination. And it doesn't hurt that violence is a sexy subject, a topic with which an academic can grab attention and make a name. Bellesiles admits that he chose the title deliberately to provoke. To call it "violence prevention studies," he says distastefully, "would have made it sound like a public health program."

It's likely, too, that some supporters of violence studies are simply following the money. Emory's program was funded from within the university, but Jackall's class was created with assistance from, yes, the Harry Frank Guggenheim Foundation, one of dozens of organizations around the country dedicated to the study of violence and aggression. Many were created in response to the high crime rates of the 1980s and early 1990s, and remain reliable cash cows even as those rates have declined 20 percent over the past decade.

Interdisciplinary approaches to aggression are not without precedent. "Peace studies," an early outgrowth of fears about nuclear proliferation, have existed at European universities for decades. (It's a sardonic commentary on American culture that along the way, "peace" segued into "violence.") And "conflict resolution studies" is already a staple at many universities around the country.

An internship with a local program devoted to preventing violence, such as a battered women's shelter, is required by many professors, and their good intentions are clearly genuine. But for some faculty, the real value of violence studies lies in more abstract realms. "I'm not interested in finding solutions to the problem of violence," Jackall states flatly. What students learn in violence studies, says Bellesiles, "is going to resonate through the rest of their lives." Many have told him, in fact, that the class was a "transformative experience," leading them to pursue careers -- in law, medicine, politics -- that will allow them to address the problem of violence.

"Violence has become a subject in its own right," says Michael Apple, an expert on curriculum change at the University of Wisconsin. More than that, it's become an organizing principle, as powerful as race or class or gender. Just as the initiation of women's studies and ethnic studies programs in the 1970s and '80s marked a new preoccupation with those categories, so the introduction of violence studies signals the new centrality of violence to how we understand ourselves and the world around us.

"We already study belief systems, psychological systems and economic systems," says Robert Myers, professor of anthropology at New York's Alfred University and director of its violence studies program. "All of these are violence systems. Violence cuts across all these other dimensions of society." Apple again: "This isn't a movement away from identity politics so much as a new way of organizing them. Hate crimes against gays and lesbians, racist killings of minorities, the sexual abuse of women -- all of these issues can be organized around the theme of violence."

And the theme isn't played out among those groups alone. Thanks to a pervasively violent popular culture, participant or observer, perpetrator or victim, violence is what we all have in common. Bellesiles originally imagined his violence studies program as a small, "almost subversive" group of professors and students. Instead it was an instant hit, embraced by students, faculty and administration alike. "We've had the largest class at Emory for three years in a row," Bellesiles notes proudly. "From the very first semester, we had more students wanting to minor in violence studies than we could accommodate."

And no wonder: If the free-floating violence of American culture has attached itself to everyone, it has most thoroughly enveloped those who grew up in its malevolent haze. "One thing I learned from discussions in class is that the things that concerned me when I was growing up -- nuclear war, 'two minutes to midnight' -- were totally unfamiliar to the students," observes 35-year-old Patricia Brennan, an Emory psychologist who co-taught violence 101 last semester. None of them have even heard of the Doomsday Clock. "What they're worried about is being shot by a random killer." She continues, "A student in my discussion section actually witnessed someone getting shot at his high school. The class is mind-opening to the professors in terms of what we're dealing with here."

But what we're confronting is as much a problem of imagination as of experience. Violence remains a serious threat in America, as the student whose classmate was shot can attest. But the fears of the rest of Brennan's class that they will be shot by a "random killer" show something else just as clearly: Our conception of violence now bears but a passing relation to its reality. The largely white, affluent students at Emory have an almost infinitesimal chance of meeting their end through violence, odds that are lower now than at any time since Patricia Brennan was a child, worried about nuclear war. But that fact counts for little in a culture that elevates and celebrates violence.

In a perverse way, this disjunction makes the case for violence studies: Its advocates don't need to argue that violence can make the leap from the corporeal to the abstract, because that's already occurred. Rates of crime may continue to drop; overall levels of school violence may keep declining; much-hyped events like Y2K may pass quietly and without incident. But violence as an idea, as an obsession, is here to stay. "In my most idealistic moments," says Bellesiles, "I hope that the program fades into obscurity because violence has become less of an issue." He chuckles. "But I don't expect that to happen."