Americans still don't understand how the French eat whatever they want and live to tell about it. 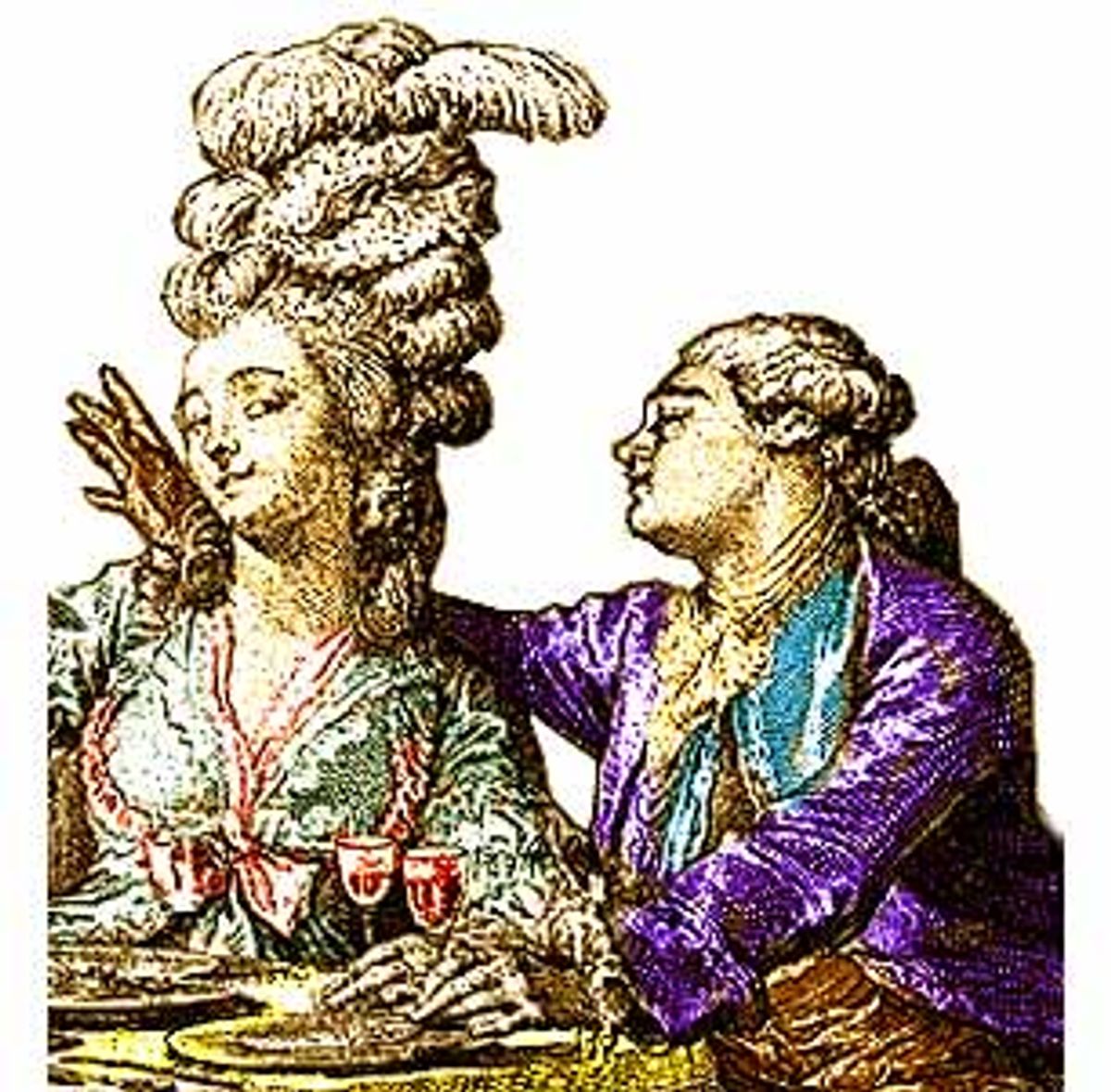 For much of the past decade, American and British scientists have been annoyed by the phenomenon known as the French Paradox. Nutritionally speaking, the French have been getting away with murder: They eat all the butter, cream, foie gras, pastry and cheese that their hearts desire, and yet their rates of obesity and heart disease are much lower than ours. The French eat three times as much saturated animal fat as Americans do, and only a third as many die of heart attacks. It's maddening.

Baffled, scientists struggled to come up with a few hypotheses: Maybe it was something in the red wine, they said. But while winemakers worldwide celebrated that news, more sober research has suggested that any alcohol -- whether Lafite Rothschild, a banana daiquiri or a cold Bud -- pretty much has the same nice, relaxing effect. So while a little wine is apt to do you good, the French aren't so special in having a drink now and then (though the fact that they drink wine moderately and slowly with meals, instead of downing shots at the bar, could make a difference).

After the wine argument, scientists ventured that it must be the olive oil that keeps the French healthy. But this doesn't explain the butter or brie. Then, voil`, French scientist Serge Renaud (made famous on "60 Minutes" as an expert on the French Paradox) said it's the foie gras that melts away cholesterol. This, too, is dicey: While people in Toulouse -- the fattened force-fed duck-liver-eating area of France -- do indeed have one of the lowest rates of heart disease in the developed world, they actually only eat the delicacy about six times a year. And they're a lot more likely to die of stroke than we are anyway.

Other researchers, perhaps sponsored by the garlic and onion industry, suggested that the French Paradox effect is due to garlic and onions. Claude Fischler, a nutritional sociologist at INSERM, the French equivalent of America's National Institutes of Health, says all these single hypotheses are more wishful thinking than science.

"The government loves the French Paradox because it sells red wine -- Bordeaux wine in particular -- it sells French lifestyle and a number of other French products," he tells me over dinner at an outdoor Paris bistro. "It's something in the cheese! Something from the fat from ducks! It's butter! Really, we're a long way from science here."

More than anything, Fischler thinks the French Paradox is a kind of cultural Rorschach test. "Americans think it's unfair, and Francophiles think it's wonderful."

Last May, researchers writing in the British Medical Journal came up with the least cheerful hypothesis of all. They argued that it's just a matter of time before the French -- who are in fact eating more hamburgers and french fries these days -- catch up with Americans, and begin suffering the same high rates of cardiovascular disease.

These researchers, Malcolm Law and Nicholas Wald (who must have thought up their hypothesis over dry kidney pie, while dreaming of the kind of duck in red wine and honey sauce I had with Claude Fischler), call this the "time lag explanation" for the French Paradox. As far as they are concerned, the McDonaldization (this is a French catch-all term for the importation of fast food and other American cultural horrors) of France will continue at a frantic pace, and it is as inevitable that French men will start keeling over of heart attacks as it is that French women will eventually wear jean shorts and marshmallow tennis shoes on the streets of Paris.

Nutritionists on this side of the Atlantic are just as dour in their predictions. Marion Nestle, chair of New York University's department of nutrition, says that the wonderful food she found on every street corner in Paris when she lived there in 1983 has changed. "Then you could go into some local bar, and you would be given a little tart, a little salad and a little quiche that would knock your socks off," she says wistfully. But now, she says, the quality of ingredients, the concern about flavor and the freshness of the food has declined. "Last time I was in Paris, everything seemed bigger, softer and more commercially prepared. If you wanted really high quality food, you had to pay for it." When she looked at food data in France, she saw that indeed the amount of fat has risen, and the French are snacking more, eating fewer long meals and visiting McDonald's more often on the sly. She, like Law and Wald, says, "Just wait."

The French, however, disagree about this time lag hypothesis. Nor do they believe that Parisian women will start wearing Nikes with skirts to work anytime soon. "It's hilarious!" says Fischler, finishing a fresh ricotta-stuffed tortellini appetizer. "The American attitude is always to look for a silver bullet -- it's the wine, the cheese -- or else it has to be nothing, we'll get worse, we haven't had time to get the terrible consequences of modern eating." Instead, says Fischler, the deeply rooted French traditions of eating not only explain the French Paradox, but will insure that it continues, even if it decreases somewhat.

Americans, he says, are always painting the picture in extremes. The French, he continues over a piece of grilled fish, pouring me another glass of that medicinal red wine, have a long-evolved culture of eating that emphasizes pleasure -- and order. The French eat comme il faut, "the way it should be done." They may eat whatever they want, but they eat by strict rules: no snacking, no seconds, no skipping meals, no bolting down food, no heading straight for dessert before first filling up on vegetables, salad and meat. They savor their food and eat smaller portions than Americans do.

They also eat a greater diversity of food, which could have something to do with their health, too. And while traditions are loosening in France -- more women are working, and so people are more apt to grab a sandwich at lunch -- a recent survey Fischler took showed that while more people will skip the cheese course or the first course once or twice a week, they still don't skip meals. The French sit down at the table for well-prepared meals, with high-quality foods, and between times they don't eat. Period.

"In France, we eat in a socially controlled and regulated way, but it's pleasant," says Fischler. "Structure is something that constrains you but also supports you." Fischler and a food-loving University of Pennsylvania psychologist, Paul Rozin, say the fact that the French have lower rates of coronary artery disease and are skinnier than Americans doesn't have so much to do with what they eat, but how they eat -- especially their positive attitudes about food. Talk to a French woman about whether she ever feels guilty about what she eats and she will tell you, as one impossibly young-looking 46-year-old dancer told me, "Absolutely not -- I eat exactly what I please."

Then try to find a woman in the U.S. who will answer the same way. There's no magic ingredient that keeps French arteries clear, but instead a whole system of eating that allows them to indulge without overdoing it, and without feeling guilty. Fischler and Rozin say that the biggest predictor of health may not be the content of someone's diet, but how stressed out they are about food, and how relaxed they are about eating. In other words, the more pleasurable it is to eat, the healthier it is for you.

In a study published in the October issue of the journal Appetite, Fischler and Rozin surveyed 1,281 French, American, Japanese and Flemish people about their attitudes toward food. Participants were asked how much they worried about food and the healthiness of their diet, whether they bought low-fat and other diet foods and how much importance they placed on food as a positive force in life. Americans, it turned out, were much more likely than the French to worry about what they eat, buy diet foods and still think of themselves as unhealthy eaters. The French and Belgians were at the other extreme, thinking about food as mainly a great pleasure, and feeling fine about how healthy their diet was. In word association tests, given "chocolate cake," the French would say "celebration," and Americans, "guilt." Given "heavy cream," the French said "whipped," while the Americans responded "unhealthy." Says Rozin, "The French are more inclined to think of food as something you eat and experience, and the Americans are thinking about some sort of chemicals that are getting into your body."

Americans have the worst of both worlds, Rozin says -- they have greater concerns about their diets, and they are much more dissatisfied with what they eat. And that sort of stress, he says, can result in a lot of poor eating habits for Americans -- extreme dieting, bingeing, overeating and constantly obsessing about food -- which are ultimately unhealthy. The real paradox, Rozin says, isn't that the French enjoy food and remain thin and heart disease-free. It's that Americans worry so much about food, do so much more to control their weight and end up so much more dissatisfied with their meals.

American researchers are tentative about Fischler and Rozin's pleasure hypothesis. Eric Rimm, a nutritional epidemiologist at Harvard, says a pleasurable way of eating may be part of the puzzle. "There is something to eating patterns that makes a difference to overall health," he says. "It can't just be the total calories you get at the end of the day."

Eating slowly, he points out, may make a difference. And then there are psychosocial effects. "In France they eat with large families and social networks, which may be important to peace of mind, which has been linked to coronary disease." He hesitates. "Maybe there are psychological effects to the way they eat in France, too."

As the French would say, with just a hint of derision, "Mais oui -- but of course." And then, like Claude Fischler and me, they would finish off a long, perfect meal with a couple little spoonfuls of intensely rich chocolate souffli.