"What's Love Got To Do with It? A Critical Look at American Charity" by David Wagner

An argument that American charity lines the pockets of the well-heeled while it screws the poor. 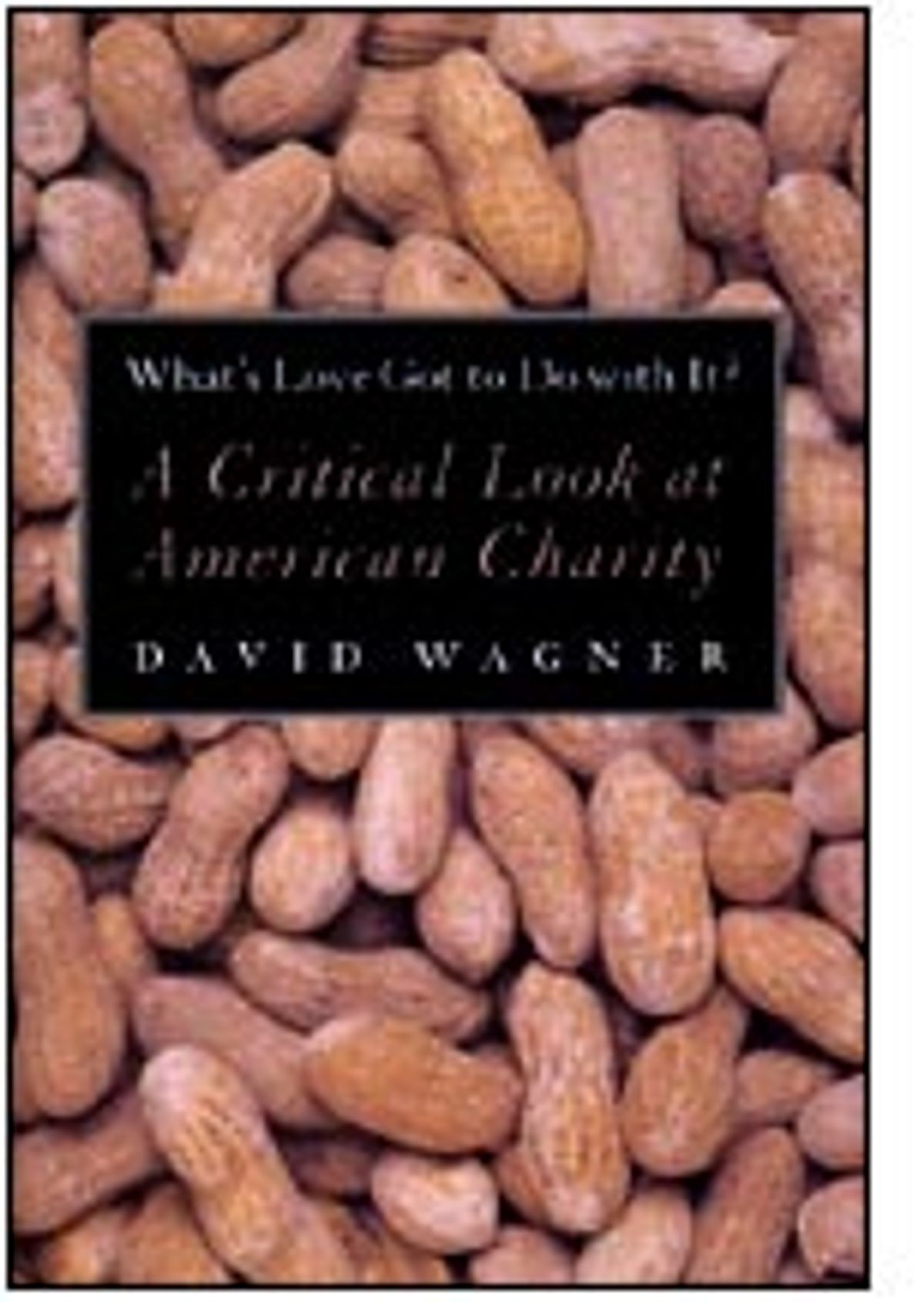 Just as I was finishing David Wagner's tightly argued essay on the history of American charity, out came a poll that seemed to confirm everything the sociologist was saying: Religion and its do-gooder stepchild, volunteerism, have all but smothered real political engagement in America.

The pollsters, who based their findings on a sampling of 800 college students, cited as typical the response of two undergraduates, a 24-year-old music student at UCLA who sings in hospitals and convalescent homes but eschews political action because it's "a time issue," and a 19-year-old Boston University lad who dismisses "the whole field of politics" because "it doesn't interest me much to get involved in such a hypocritical situation." Yet they found a high degree of what both they and the students identified as "civic-mindedness."

Wagner's central argument is that Americans' increasing disengagement from political activity, or more specifically our failure to address fundamental social and economic inequality through the political system the way that the European social democracies have, has direct links to the individualistic Protestantism in which American charity has its origins.

Wagner's history is hardly path-breaking. David Rothman in "The Invention of the Asylum," Frances Fox Piven and Richard Cloward in "Regulating the Poor" and those great theorists of Protestantism and the rise of capitalism R.H. Tawney and Max Weber have all articulated his central argument. But Wagner's concise and vivid chronicle of the rise of paternalistic American charity is a valuable handbook for anyone who wants to challenge the duplicitous nostrums that the vapid stars of both political parties have lately offered up on everything from welfare to the widening class gap to the impoverishment of public education to the more and more degraded public-health system.

Today, as in the earliest days of the colonies, the first concern of the charities is to distinguish between the deserving and the undeserving poor. Even the Quakers, whom we all too readily vest with selfless generosity, sought not so much to relieve suffering as to establish moral friendship through home visits in which one of the Friends would assess an unfortunate woman's "character, her situation, her habits and mode of life, her wants, and the best means of affording relief, so that assistance may not be extended to the vicious, and idle, when it is due only to the honest and industrious suffering under sickness and misfortune."

Nor is the distinction between the worthy and the unworthy everything: Equally vital to the charitable tradition, to the intent of almsgiving, is the elevation of the giver. In Christianity it has always been so, as theological historian Boniface Ramsey observes: "They exist [the poor] for the sake of the rich, to offer them opportunities for beneficence or to test them." Or in the language of St. Eligius: "God could have made all men rich, but He wanted there to be poor people in this world, that the rich might be able to redeem their sins."

Mere theo-twaddle, you say? Consider the Rockefellers. Or Carnegie. Or Ford. Or for that matter, Gates. The liberal position is that the great global foundations these men founded represent a sort of intergenerational payback. Wagner doesn't dismiss the good works performed by the gilded children of the great malefactors (medicine, parks, libraries, concert halls -- all noble), but he points out the two salient facts behind such platinum gift-giving: The families secure for themselves, without really working, ruling social status for generations to follow; and, more important, they give their largess away at direct cost to you and me, the taxpayers, for by having their accountants secret half their wealth in tax-exempt foundations, they cleverly preserve the rest from the tax bite -- and the redistribution -- that affects the rest of us.

Nor do the modern secular recipients of charitable largess escape Wagner's eye. With the general collapse of the political left in America, the activism of the '60s and '70s took refuge in an entirely new sector of the charity world: the nonprofit. What began as a method to help the poor and the disenfranchised win food, housing and jobs or to draw attention to middle-class social concerns (environment and education) that the corporate order ignores has metamorphosed into an enormous career and service division of the economy constantly begging for government grants, with (for example) YMCAs -- once devoted to providing exercise and succor for the poor -- now getting taxpayers' money to run spas for the well-heeled.

Who benefits? Wagner calculates that in 1992 the nonprofit sector received a total tax subsidy of more than $220 billion -- that's money from you and me -- for its operations. The amount was roughly double the level of all federal spending on the poor and the unemployed.

The usual response is that public bureaucracies steal or waste our money for themselves and inculcate dependence. Yet could they be any less efficient than the squishy matrix of guilt and self-promotion that is our charity system? Do we genuinely believe that our latter-day Protestant paternalist approach has provided Americans with better health care, sounder housing and more reliable education than the French and the Germans and the Swedes and the Norwegians and the Dutch and the Danes and the Italians and the Spanish and even the Brits and the Irish have had the political will to erect? Do you really think that the Christian impulse has been good for the poor? Or for your grandmother? Or for your baby? If you do, go ask a French mother how much she spent on child delivery at her local hospital or what it cost to treat her father's tumors, and then take a look at Wagner's work.