Love is just a moment

Forget about finding Mr. Right. Finding oneself is more exciting than romance. These celebrated feminists sound more like hosts of "The View" than sisters of the struggle. 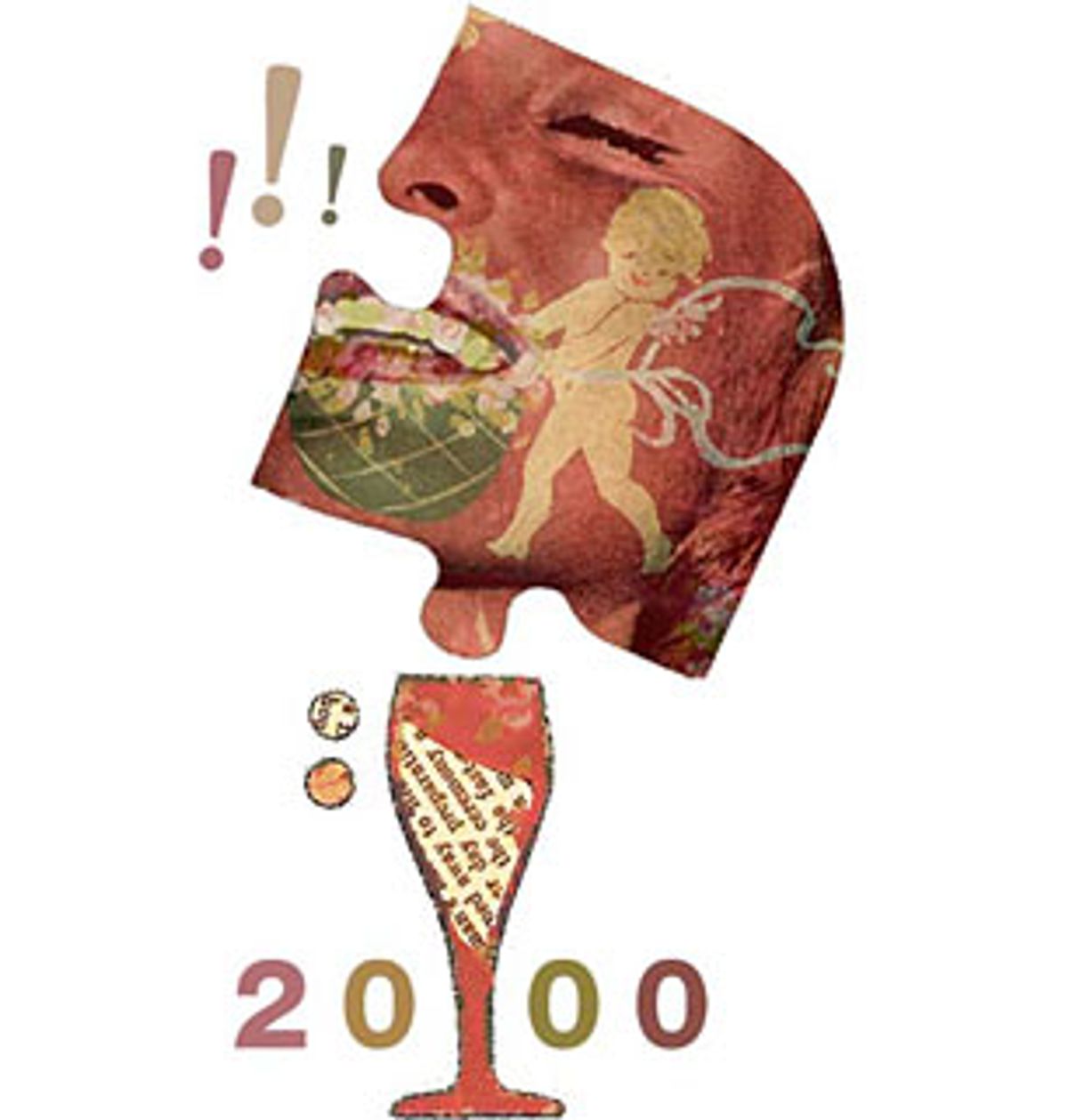 "Good evening, and welcome to our love night here at the Y," the announcer onstage crooned into the microphone. Somewhere in the packed auditorium, a female voice let out a whoop. "Love night" was a panel titled "What's Love Got to Do With It?: Women Speak Out on Intimate Relationships at the Beginning of the New Century," held Tuesday at the 92nd Street Y, New York's venerable cultural center.

The speakers -- "Each in her own way represents today's woman," we were told by the Y program director -- were Gloria Steinem (probably accustomed by now to being introduced as someone who "needs no introduction"), feminist professor and prolific author bell hooks, poet and naturalist Diane Ackerman and short-story writer Amy Bloom. Despite the presence of Steinem and hooks, there was surprisingly little in the way of gender politics. Hooks, probably the most prominent African-American feminist in the public arena today, did warn at one point -- after disclosing that she feels "panicked" when bright, talented women students marry at 22 or 23 -- that "Patriarchy hasn't gone away; it hasn't changed; though because of feminism we have more freedoms within it."

But this call to vigilance sounded a somewhat discordant, and muted, note against the mostly bright and good-natured tone of the evening. Indeed, it was one of the very few times that the P-word even came up.

The sunny mood was set by none other than hooks, who had organized the panel and presided over the discussion. I had expected hooks to talk about her belief, expressed in her new book, "All About Love: New Visions," that our social arrangements are rigged so that in relationships, "Men are more likely to get their emotional needs met while women will be deprived," and that "Most men use psychological terrorism as a way to subordinate women." (I was looking forward to asking her if men might have a different and valid perspective on which gender excels in psychological terrorism.) But nothing so provocative was ever uttered. The handful of men in the sea of women had no occasion to feel under attack.

The panelists, including Steinem and hooks, were eager to concede that men, too, have problems in relationships, maybe even the same problems as women, albeit in a different degree. A rather wan-looking Steinem showed not a flash of the anger that she has sometimes proclaimed to be a feminist's only alternative to depression. Hooks, meanwhile, turned out to be not just relentlessly sweet but -- there's no other way to say it -- girlish. From the opening moment when she coyly announced that she had asked for the lights to be turned up because "Love is better with the lights on," she kept talking about "circles of love." It was a phrase that seemed to mean simply a network of friends, but she repeated it like a mantra, eventually prompting Ackerman to interject with a wee bit of sarcasm, "How about a polygon of love?"

Worse yet, hooks seemed to see the panel itself as her "circle of love." She said things like, "I have grown in love because of the work of every other woman on this panel," and drew a none too reluctant Steinem into a full-scale love-in, extolling her ability to create such a circle across generations and declaring, "I claim you in my circle of love. Do you claim me in your circle of love?"

Steinem responded with a somewhat startled, "Yes." The two then spent a few minutes exchanging fond reminiscences of how they first became acquainted and how each initially felt intimidated by meeting the other. I was reminded of notes exchanged by best friends in junior high where the i's are dotted with hearts. I wondered, too, if this cooing about circles of love is what happens when '70s sisterhood meets New Age psychobabble.

Interestingly, the two panelists who were not professional feminists -- Ackerman and Bloom -- seemed by far the most tough-minded and the least willing to play along with this "just between us girls" atmosphere. Despite their best efforts, it was hard not to feel that you were watching a cross between ABC's girl-talk show "The View" and a New Age-flavored relationship workshop.

To be sure, some interesting comments were made along the way. Hooks said that many women in their 20s were telling her that they were making as much money as the men but had no time for love because everyone was working so much. She noted that the political right, with its critique of women in the work force, had taken over the issue of the time crunch and its effect on relationships. Bloom -- who was frankly skeptical of the notion that one couldn't find the time for a relationship one really cared about -- suggested that it is avoidance of intimacy, with its messiness and its risk of failure, that sends many people into work overdrive.

Ackerman managed to talk about her life with her partner of 30 years in a way that was genuinely moving without being corny or exhibitionistic. In many ways, she said, they don't have the same ideas or values -- she loves nature, he's indifferent to it -- yet they are bound by a sensuous, generous mutual devotion: "We tell people we stay with each other for the sake of the children -- each is the other's child." At the start of the discussion, everyone agreed that feminism and love were not in opposition; maybe I only imagined the brief, awkward silence after Bloom added that if they were, love would always win. Eventually, though, it turned out that the harmony wasn't complete.

Steinem and hooks were clearly uneasy with the primacy of romantic love. Hooks suggested that if people were looking too intently for someone special, it was because they didn't have a circle of you-know-what. Steinem was especially scornful of the idea of looking for a person who will complete you, and suggested that "self-discovery" was more exciting than romance. "Traditionally, for women, finding somebody was a demarcation; everything would be OK after that," she said. "In reality, love is just a moment, this great rush of oneness."

Ackerman and Bloom stuck up for romantic love. "I don't think love is a moment or a demarcation," said Bloom. "But if you're lucky, it can become part of the work of your life."

The liveliest moments actually came during the question-and-answer period. A middle-aged woman who introduced herself as Taffy complained, "When we marched in the '70s, I thought we would put an end to women being treated as objects, but now I see it getting worse and worse. Men are trading in women like cars." She was especially piqued by Jack Nicholson's choice of a young girlfriend.

Interestingly, it was Steinem, known for her own share of apocalyptic claims about the plight of women, who replied that things have changed and women do have more options today. (Ackerman chimed in with a reminder that women, too, trade in their partners for trophy mates.) More interestingly, Taffy's suggestion, "We should organize again," drew only a weak, scattered splash of applause.

A version of female empowerment much more after the audience's heart was offered by a feisty young woman named Jeanie who took issue with another audience member's gripe about women who will place romance above sisterhood and cancel a dinner with women friends if they have a date with a man. "I think we're being very hard on women," Jeanie said. "Guys will cancel plans with their male buddies if they have a date with a woman and the prospect of having sex, but we don't put them down for it. What's wrong with saying, 'I don't want to go out with my friends, I want to get laid?'" (Appreciative laughter and applause.)

The irrepressible Jeanie went on to question Steinem's assertion that finding oneself was much more important than finding another person; however, she put an unexpected twist on the quest for Mr. Right. She invoked Vladimir Nabokov's wife Vera, who came to all his lectures, helped him in his work and took care of his personal and social life, only she saw herself in Vladimir's part, not Vera's. "I want someone who will be completely devoted to my work."

There was some dispute on the panel as to whether Vera Nabokov was a servile wife under her husband's thumb (Bloom vehemently disagreed), but Jeanie was not deterred. "That's what I want!" she cried. "I want a husband under my thumb!"

I didn't know whether to admire her willingness to deny not only traditional feminine roles but feminist pieties about nonhierarchical relationships, or to lament the double standard that allows women to say things no man these days could get away with saying openly. In fairness to Jeanie, she did add that the helpmate role had its own rewards, but those were clearly not the rewards she was after. She wanted, as Ackerman succinctly put it, a wife. A male wife.

The question period ended rather abruptly, because the panel had run over its allotted time. In the end, nearly two hours after the conversation had started, a multitude of real issues, from changing sex roles to the differences and similarities in what women and men want and get out of relationships, remained unexplored.

Some important subjects -- the extent to which women help perpetuate stereotypes by gravitating to wealthier and more powerful men, and the tension between divorce as a safeguard of freely chosen love and the wounds it inflicts on children -- were picked up and quickly dropped. And if anything was said about the outlook for love in the new century, except that it was here to stay, I must have missed it.

So, if the event was light on ideology, it was, alas, equally light on substance. As we walked out of the Y, my male companion remarked that he hadn't disagreed with much that was said, if only for the reason that not much was said.

In part, no doubt, this was due to the lack of any real debate. There were minor disagreements, but no real challenges to anyone's ideas.

I had the horrible suspicion that this was somebody's -- hooks'? -- idea of a feminine panel: no intellectual sparring, no probing analysis, just sisterly bonding and sharing.

The main conclusion I was left with was that gender warfare is rapidly becoming passi, even among people who go to events with feminist speakers, but the liberated woman lives on. And maybe wanton self-disclosure is going out of style as well. One of the night's biggest bursts of applause came when Ackerman, asked by hooks if she found her disagreements with her partner "erotically stimulating," paused and replied only half-facetiously, "None of your business."