The Corbis digital archive is privately held by Gates, but it's former human rights attorney Steve Davis' job to make it work. 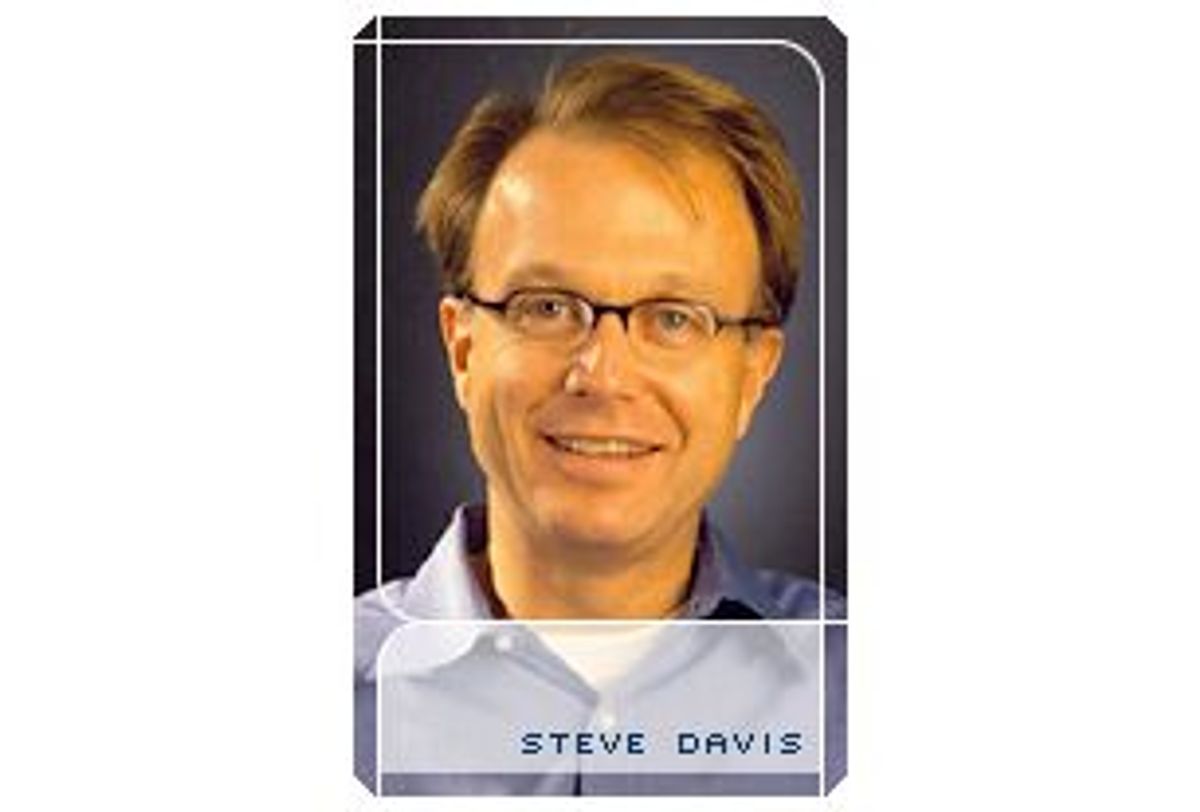 If a picture is worth a thousand words then Corbis, with its collection of more than 65 million images, must have a street value greater than the Bible, the lost libraries of Alexandria and the collected works of Stephen King combined. But it's Steve Davis' job to figure out how to make money off the vast archives. Corbis' president and CEO says the digital image provider is betting on a world where digital art will be everywhere -- even in the wired devices that will soon replace the funky magnets and calendars cluttering your refrigerator or desk.

Davis didn't exactly envision this high-tech future; he arrived at Corbis through the back door of intellectual property -- as an attorney interested in the process of protecting the copyright of digitally transmitted images.
It was Bill Gates who in 1989 founded the company; it is still privately held by the Microsoft mogul. The Corbis archives contain some of the world's most significant and recognizable photography and fine art, including works from Ansel Adams, Galen Rowell and the 17 million historical images of the Bettmann Archive. Its recent acquisition of Sygma, the world's largest news photography agency, suggests that Corbis is positioning itself as a digital platform for real-time news content.

But turning this vast archive into a profitable business seems an odd calling for Davis. His career arc has hardly followed the typical trajectory of a high-tech mover-and-shaker. After undergraduate studies at Princeton, Davis won a fellowship to study Chinese in Taiwan, and spent the next few years wandering through Southeast Asia and Europe, working on international refugee and human rights issues. He returned to the United States for an
advanced degree in Chinese studies from the University of Washington in 1984 and then studied for a time in Beijing. Next came a law degree from the Columbia University School of Law, where Davis won the Faculty Prize in International Law for his work on China's legal system. Soon thereafter, he made a nimble leap to the law firm of Bill Gates Sr., which put him in touch with Bill Jr.

What's the connection between Chinese law and digital imagery?

It's not a direct connection. I'd done a lot of work during the 1980s on human rights and refugees and Asia policy but then life took its own course. Quite frankly some of that was due to Tiananmen -- but some of it was due to family interests. The upshot is that I came back to Seattle. And there is not a lot of public law activity in Seattle.

So I decided to step back and try something else for a little while, pursue some other interests. That led to me practicing law in the intellectual property area, a really fascinating, emerging, conflicting area of the law. That must be where the carry-over is; in the refugee and international human rights area, you're always on the policy front line, looking at new issues that are pretty conflicted. To me intellectual property issues are another way to work through conflict, apply some of my strategic and policy thinking to something which I think is very important in the world.

You worked on those intellectual property issues in Bill Gates' father's law firm, didn't you? I have to ask: How far did the acorn fall from the tree?

They're very similar in many ways, I think, in their passion and in their intellect. They share an extraordinary capacity for connecting a lot of pretty complicated dots very quickly. Big Bill has been working in a large community with lots of diverse interests, and that brings a certain wisdom to who he is; his son is a technology-driven visionary. That creates quite a few differences.

Art on the Internet is already significantly different from the original vision of its artist creator, isn't it? When does that manipulation start to compromise the artists' vision -- and "ownership" of a particular image?

The whole issue of alteration and manipulation is a big one. As the technologies evolve, some of the limitations will be overcome by virtue of bandwidth, more sophisticated tools and compression techniques. We're seeing huge improvements in those areas already.

A lot of the photography that we have is intended to be manipulated. A lot of our artists work in the world of commercial photography and that's their intention, to allow people to take a tree and move it or whatever, so we certainly don't want to discourage that. That's also part of putting creativity and the tools in the hands of the people. We do put restrictions on historical and news imagery where we say: This is an accurate news image; you're prohibited from altering it. But that's an age-old problem in the news business. There you have to rely both on enforcement techniques and trust in people.

A lot of people characterize Corbis as Bill Gates' personal trophy collection, a baseball card catalog for the richest man in the world.

It's obviously something that I've heard a lot over the years. In the early days of Corbis, particularly when the company was doing more research and development, the idea that there would be a viable, sustainable, profitable enterprise in handling, managing and distributing digital images and digital content was considered crazy. I can see why people jumped to the conclusion that this was a personal project by the richest man in the world. But in fact, it's never been that.

The acquisition took place because Bill realized in the late 1980s that a number of critical technologies were going to be developed over the ensuing decade that would profoundly affect the way people bought, sold, experienced, used and managed content, particularly visual content like photography and fine art. Some were in the area of hardware development -- affordable desktop printers and large screen technologies creating a new demand for images. Some were in software -- desktop publishing and multimedia authoring software; plus there were the Internet developments for distribution, developments for managing large quantities of different kinds of data and all the digitization technologies. Those were five major driving technologies that Bill saw.

The market wasn't ready to get into digital images yet because there wasn't the bandwidth or technology on the desktop. So the early '90s were about acquiring a collection to prepare for that eventual market.

In the last three years, we've seen evidence that the market we bet on 10 years ago is beginning to flourish. As bandwidth and desktop publishing have reached the consumer desktop and as almost all business-to-business users -- graphic design firms, publishers, magazine publishers, book publishers -- have digital capabilities on their desktop, the demand for receiving photography, fine art, illustration, video, through an Internet-driven digital environment is growing tremendously.

But the Internet is kind of a dangerous distribution channel for pictures, isn't it? Lots of pirates on those high seas. Ownership and intellectual property rights aren't given a whole lot of attention by many end users.

The focus question you're trying to raise is the whole consumer Internet -- the ability to download pictures for your personal use. This is central to where we're headed. We believe first of all -- and this is a core principle -- in artists' rights and copyright and intellectual property protection. These will evolve given new technologies, but fundamentally they won't change. Artists should be protected -- artists and writers and photographers -- their copyright should be honored online as well as offline. We strongly reject the notion that the Internet is a free-for-all. It's simply not. It's not true legally, it isn't going to be true economically and it shouldn't be true artistically.

You seem very vehement about that!

The thing that initially attracted me to Corbis was the idea that Gates was starting what was then a research and development project in putting really high-end intellectual property online. My first job here was to come in as a lawyer in-house and to think through the policy and business structure and models for that kind of opportunity.

Corbis deals with the finished products of the photography process. But what about that creation process itself? Why aren't digital cameras more popular?

In five years, you won't ask that question, because the adoption of digital cameras is starting to ramp up very fast. There are three reasons it hasn't happened more quickly. The best digital cameras are still fairly expensive, and it's just a pure economic choice that a lot of professionals make. They say: I've invested $20,000 or $30,000 in my existing equipment so I'm going to wait until the price comes down and the equipment becomes a little better before I make the digital investment.

No. 2: The resolution still isn't very good. For a spot-news photographer for Reuters or Sygma or something who uses only an 8-meg file or even a 1-meg file for a newspaper image, that may be fine. But most creative professional photographers want high resolution because it gives them more marketability, you can do more with the picture, you can sell it as an advertisement or a billboard or for a book. Until the resolution gets better, that's going to be a disincentive.

The third reason -- and this is an interesting one -- is that we haven't really changed the workflow of professional photographers and editors. How do they want to use a digital camera? One of their biggest concerns is that you don't have the ability to have all the images available. With your first edit from digital you eliminate all these potential images that might have future value. An interesting example is that famous picture of Clinton kissing Monica Lewinsky in that crowd. If that had been shot by a digital camera, that would have been erased instead of saved. There's a fear a lot of photojournalists have that they're going to lose valuable shots if they use digital cameras. And what that means is that we're going to have to adopt new standards for editing from digital cameras. It will take some time for photographers and editors to work through how to create their criteria for new types of editing.

With the consolidation of so many photo archives in the hands of such a small number of companies or individuals, does our visual history become proprietary? Who owns the past?

That's an interesting question. I think that the ownership of the past visually stays as it has been. There's going to be a number of public collections ranging from the Library of Congress to the National Archives.

But the fact is there's also a consolidation of some of the key historical private archives. It's important to note that they've been in private hands for years. Yes, they're in a fewer number of hands. That's a given. But they're also being conserved by this digital process. The reason consolidation is occurring in our industry is because the cost of technology demands that there be a scale against which you plot all those costs.

It's very expensive to take the Bettmann historical archives and digitize and catalog them. And fundamentally it's only with that digitizing and cataloging that collection of the past can be preserved, because most of that material is deteriorating. Without private companies willing to invest in the technologies to preserve these collections, you wouldn't have these collections in the next 50 years.

Patrizia DiLucchio is a writer who lives in Monterey, Calif.