A mother signs away her son. 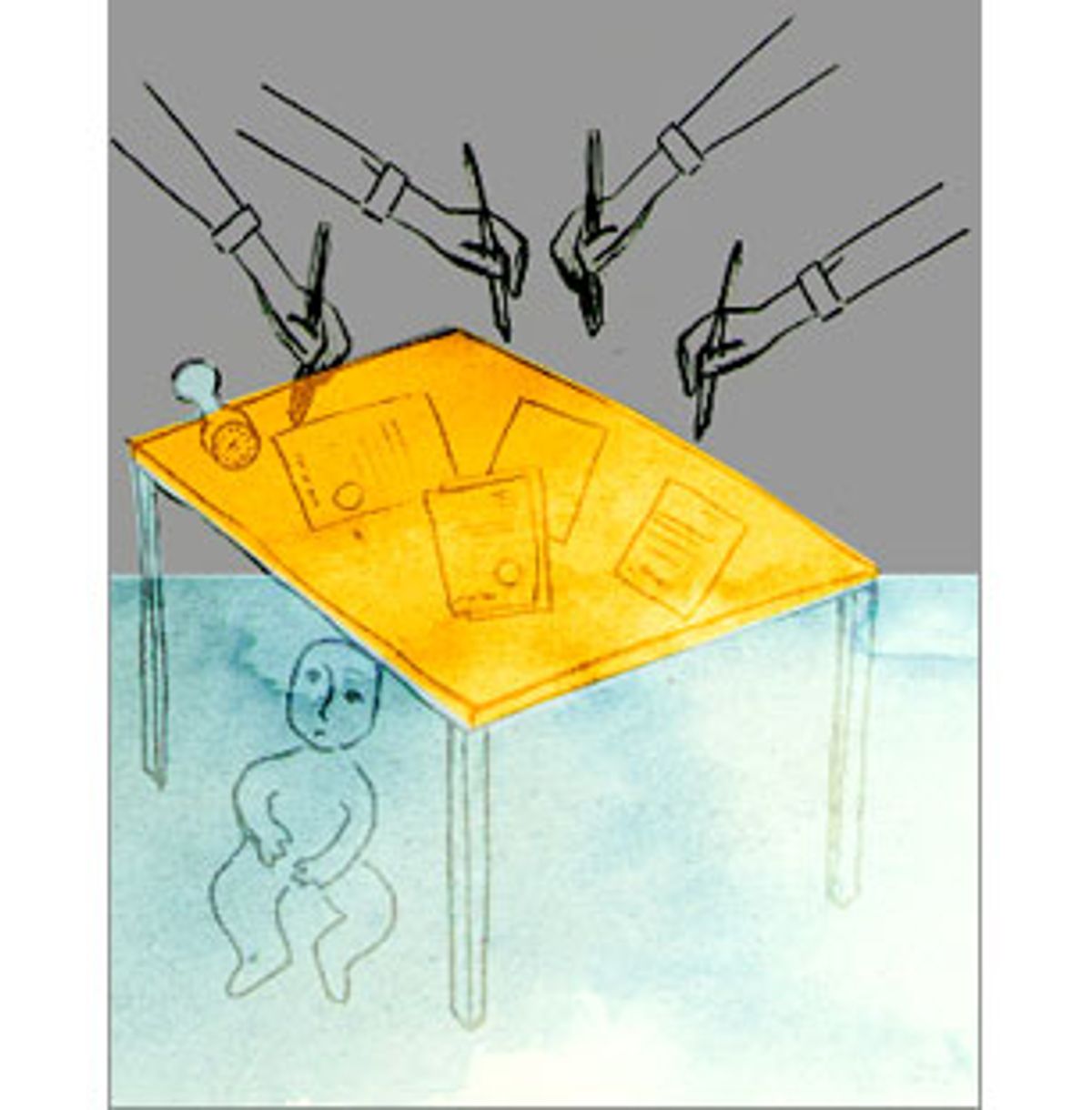 Today I watched a woman give up her child.

By "watched," I mean that I sat in an agency
conference room at a table with the mother and her family as she signed the papers to
relinquish her child to the state. There was no scene like you might expect -- the caseworker
tearing the child from the mother's arms, the mother collapsing to the floor in hysterics as her
child was carried away. No, the mother sobbed silently as she signed four copies of a series of
papers that said that she would no longer have any rights whatsoever to her child.

As much as
I've wanted this for the child, it was distressing to witness -- an event so packed with meaning,
yet plagued with the familiar trivialities of buying a car or a house. The caseworker read each
page out loud before allowing the mother to sign. After she signed, the mother slid the paper
down the table for me and an agency employee to sign as witnesses. The notary sitting next to
me then stamped and dated each page.

One of the pages had a place where the mother could
write down any thoughts or sentiments for her child. She breathed deeply and then started to
write. As her pen scratched across the page, she started to shudder and tears streamed down
her face. Her mother, sitting next to her, put her arms around her and pressed her head into her
daughter's hair as she wrote: "I love you very much and I never wanted to stop fighting for you."

Two signatures and a notary stamp
later, it was done.

As the child's Court Appointed Special Advocate (CASA), I've been very
involved with this family for the past year. Still, I felt like I was
witnessing something intensely private, and as I signed and dated each page,
I felt like my presence was a violent intrusion into one of the most sacred
areas of family life.

The child, now 17 months old, was placed in foster care when he was 3 months
old as the victim of violent abuse. While the mother was not accused of
inflicting any injuries on the baby, she had failed to protect him. She didn't
take him to the hospital when he was injured, and when Child Protective
Services finally got involved, the baby had complete or partially healed
bone fractures throughout his body. He also had a scar on his leg from a
cigarette burn. His injuries were so severe that, for his first three weeks in
foster care, he was carried horizontally on a pillow.

Last summer, after spending some time in jail awaiting trial, the mother had
pleaded guilty to failing to protect her child, and received lifetime probation
and a no contact order. After months of struggle in juvenile court, she finally decided that it would be best for the baby, whom she
hadn't seen in over a year, to relinquish her rights. Her own mother, the
baby's maternal grandmother, had been refused by the state for placement of
the child, due to a long history of failing to protect her own kids from
abuse and neglect.

At some point, it must have become clear to the mother
that to fight any longer would only keep the child in foster care so long
that he might never be adopted.

After the mother signed the consent papers, she had a final visit with the
baby. The state requested special permission from the mother's probation
officer to allow the visit, since the no-contact order was still in place.

I carried the baby into the conference room and put him on the floor. He
was clutching a sippy cup full of milk and looked around at all the people,
eyes wide. In addition to her own mother, the mother had brought her new
husband and her teenage brother and sister. The baby looked from face to
face and then shuffled back to me. I gave his mother a bag of Cheez-Its,
and she tore it open. The baby hesitantly walked over to her, got a
Cheez-It and returned to me. The grandmother reached for a large
Toys "R" Us bag behind her. "Look here! See what I have?" She pulled out a
Fisher-Price tricycle. Tempted, the baby toddled over to her.

His mother observed him cautiously at first, reaching out to stroke his hair
as he toddled by, straightening his sweatshirt when it rode up on his
stomach. She asked questions about his health, and his grandmother asked
whether he was talking yet. The next hour was filled with more gifts,
occasional shyness, laughter and baby babble. At one point, the baby fed
each of us a Cheez-It.

He seemed to put us in order by how often he'd seen
us in the past year. First me, then his grandmother, who had received regular
visits, then his aunt and uncle, who he'd seen twice in the past year, and
finally, his mother. "Oh look! He gave YOU a cracker!" the aunt said
enthusiastically when he gave one to his mother. Eventually, the baby was
tearing around the room, playing with each of his new toys, laughing and
interacting with everyone, occasionally looking at me as if to say, "This is
OK, right?"

After an hour, the caseworker said it was time to say goodbye. The
husband, aunt and uncle left the room, leaving only the mother, the
grandmother, the caseworker and me. The grandmother picked up the baby,
hugged him tight and kissed his face vigorously several times. He giggled
and pushed away, wanting to be put on the floor.

She passed him to his
mother, who held him over her newly pregnant belly, and tried to hug him.
He looked to me, giggling. She turned him to face her, tears again
streaming down her face, and said, "You be good. I love you. I love you."
She hugged him tight, and he giggled and looked away. She pressed her head
against his and hugged him again, and then returned him to her mother and
said, "OK." Her mother put him on the floor, and he toddled to the door.
The mother and the grandmother called after him, "Bye-bye." The caseworker
opened the door and he raced out.

The caseworker had told the mother that if the visit became too emotional,
she would have to cut it short to prevent the baby from becoming upset or
afraid. So although the mother cried openly while signing the consent
papers, she stifled her tears during the visit until she said goodbye.

I don't know what was going through her mind during all of this. She must
have prepared herself for the fact that he was unlikely to recognize her,
and that he might not even want her to hold him. She might have been
thinking about what could have been -- her new baby, her new husband and
this baby, a happy family. She might have remembered when her own mother
relinquished custody of her so that she could live with a relative in a
different state. She might have worried about whether the state would take
her new baby.

As we have gradually come to learn, the meaning of the word "family" is
fluid. When this mother signed all those papers, she made sure to check
every box that would enable her child to find her, to contact her, to know
everything about her. She enabled his future adoptive family to contact
her, to send pictures and to coordinate visits if they desire.

At the same
time, she understood that she might never see this child again. His new
family could change his name, keep their own identity a secret, and he might
never try to find her. But she brought presents, held her tears, held him
tight and told him she loved him anyway, even if the goodbye was forever.

The way she cared for her baby, or failed to, resulted in her losing him. I
expect she will live with that loss for the rest of her life. She will
probably see flickers of the son she gave up in her new baby, in children on
the street and in the mirror. Throughout the year, I have doubted whether
she was or would ever become capable of being a mother, with all that that
word entails.

But today, in one of the worst situations a
mother could be expected to endure, she did the right thing. She gave her son a chance to
have a permanent family, and she loved her son all the way through saying
goodbye. And in those moments, I saw the mother she is capable of
becoming.