A beautiful but heavy-handed new novel by the author of "Henry and Clara" evokes a post-Civil War Washington of scheming politicians and love-struck astronomers. 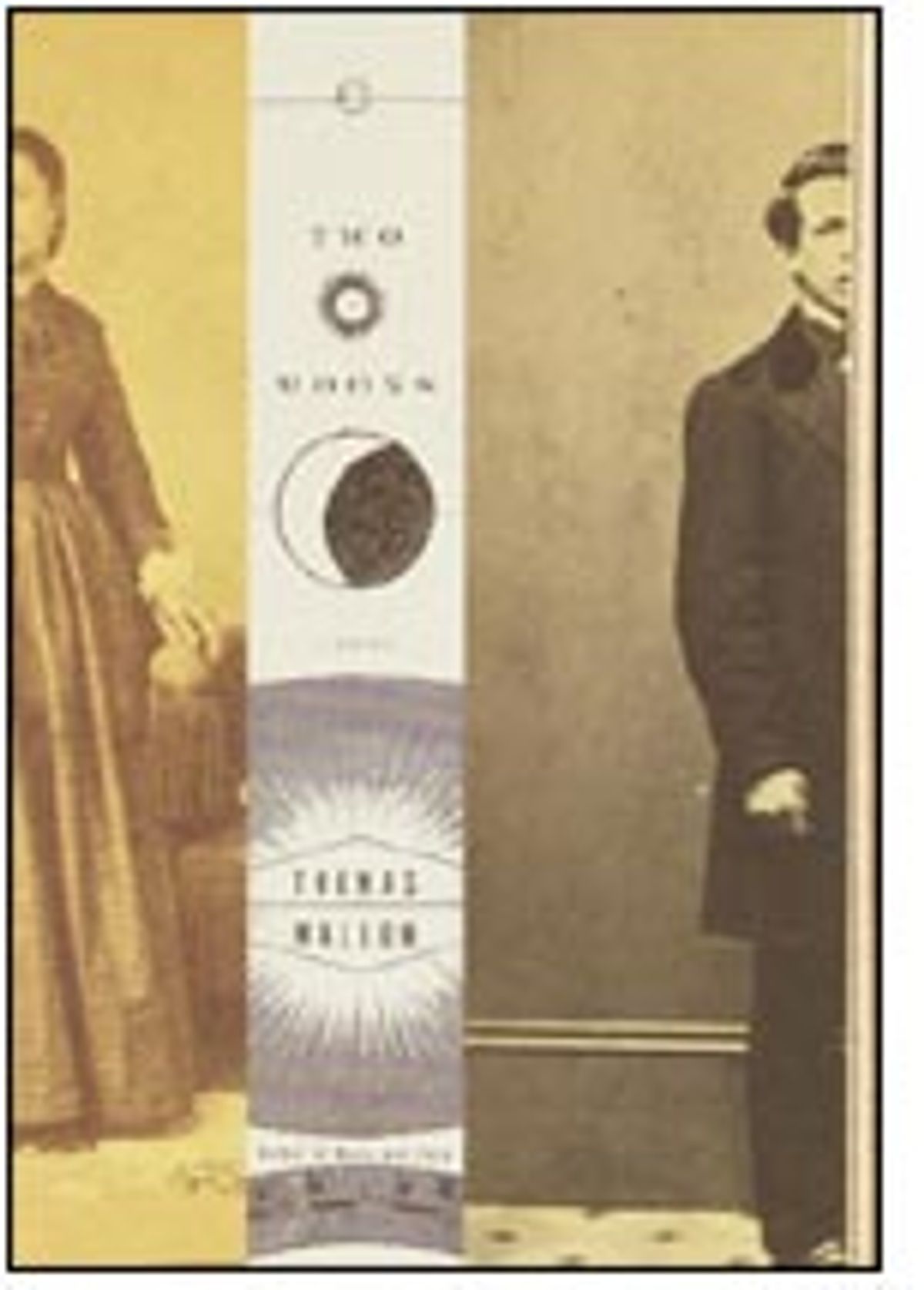 Thomas Mallon's writing sneaks up on you. No verbal pyrotechnics, a one-foot-after-the-other narrative approach -- but every so often, you pause and realize that he's been stringing together one perfectly balanced sentence after another, chapter after chapter. In his best-known novel, "Henry and Clara," that measured style worked to brilliant psychological effect: Mallon told the story of the young couple who shared Abraham Lincoln's box at the Ford Theater the night he was shot. Henry's obsession with that night simmers for 18 years before exploding into tragedy, and Mallon's decorous prose keeps the lid on.

In Mallon's new historical novel, "Two Moons," the setting is again Washington, but the action is compressed into a single year, 1877. The forgotten corner of history he illuminates this time is the world of the astronomers at the Naval Observatory, then in the Foggy Bottom neighborhood. 1877, it turns out, is the year that the "scientifics," as the chronologically correct Mallon calls them, discovered the two
satellites of Mars, convulsing the city with wonder. Washington's older residents are "walking through an eternal aftermath," their lives still uprooted by the Civil War. A rising
generation, meanwhile, knows the carnage and chaos only as a distant childhood distraction, and, for them, a lustrous science- and technology-driven future beckons.

Two fictional characters give us entree into this world. Cynthia
May, a Civil War widow blessed with a freakish talent for numbers, joins the
observatory as a "human computer." She begins to fall for Hugh Allison, a
clever but underachieving astronomer. As the pair's relationship deepens, Asaph Hall (the man who discovered Mars' moons) and other historical figures flit in and out of the
scene. Cynthia and Hugh's affair --and, in fact, all the work at the research
center -- takes place under an almost literal dark cloud: The fetid Foggy
Bottom swamps are thought to carry malaria, and the observatory has a
mortality rate fit for a combat unit.

For Cynthia, who suffered through years of melancholic listlessness after the
death of her soldier husband, the observatory job is a step toward
self-assertion. At first, it's simply the effortless toying with figures that
brings her peace, but "the astral purpose of all the numbers soon began to
paint her imagination ... Her mind soon began sliding upon the tangents she
was only supposed to be measuring." Hugh's mind, meanwhile, is sliding in
directions that threaten his career. The planets bore him. He begins to speak
in gnomic, vaguely messianic terms about a grand, mad project: somehow
projecting something -- energy? himself? -- outward, into the heavens.
"Cynthia," he tells her, "I have immortal longings."

During a halfhearted visit to an astrologer, Cynthia runs across Roscoe Conkling, the strutting, rakish Republican senator who has just helped place Rutherford B. Hayes into the White House after a disputed election. Now Conkling is using the stars to chart his battle against reformers who want to wrest government jobs from the party machines.
Mallon must have had a blast sketching this "law-making satyr," with his disdain for alcohol and tobacco, his sonorous speechifying and his "well-tended torso." Cynthia has a hunch that Conkling might be useful in nudging Hugh's project along. For his part, the high-minded Conkling gets a hard-on when Cynthia squares big numbers in her head. She strings along this elemental man for a time, but when he catches on to her game, all his egomaniacal energy is directed against her.

Mallon is effective at evoking a time -- not so unlike ours -- when rationalism and mystical thought overlapped in unpredictable, personal ways. (Cynthia views astrology as "a gaudy grease that makes the heavens move faster.") Artful scientific metaphors dot the
book, as when Mallon notes that Cynthia's "once mad grief hardened, like gas into solid." As the plot heats up, however, and Cynthia and Hugh race to pull off their scheme, incident supplants atmosphere and psychology, and the spell breaks a bit. Maybe it depends on your own views about the significance of the cosmos' vastness, but Hugh's hunger to literally send a signal to the stars left me cold.

Toward the end, too, the reader senses the author's hand moving his characters a little too purposefully through the well-researched city scenes, aligning his astral figures of speech just so. The effect is a bit like when you're sitting in a planetarium, watching the stars, and you look down for a minute and catch sight of the projector. After that, you can't help noticing the seams in the ceiling. But the show can still be beautiful.