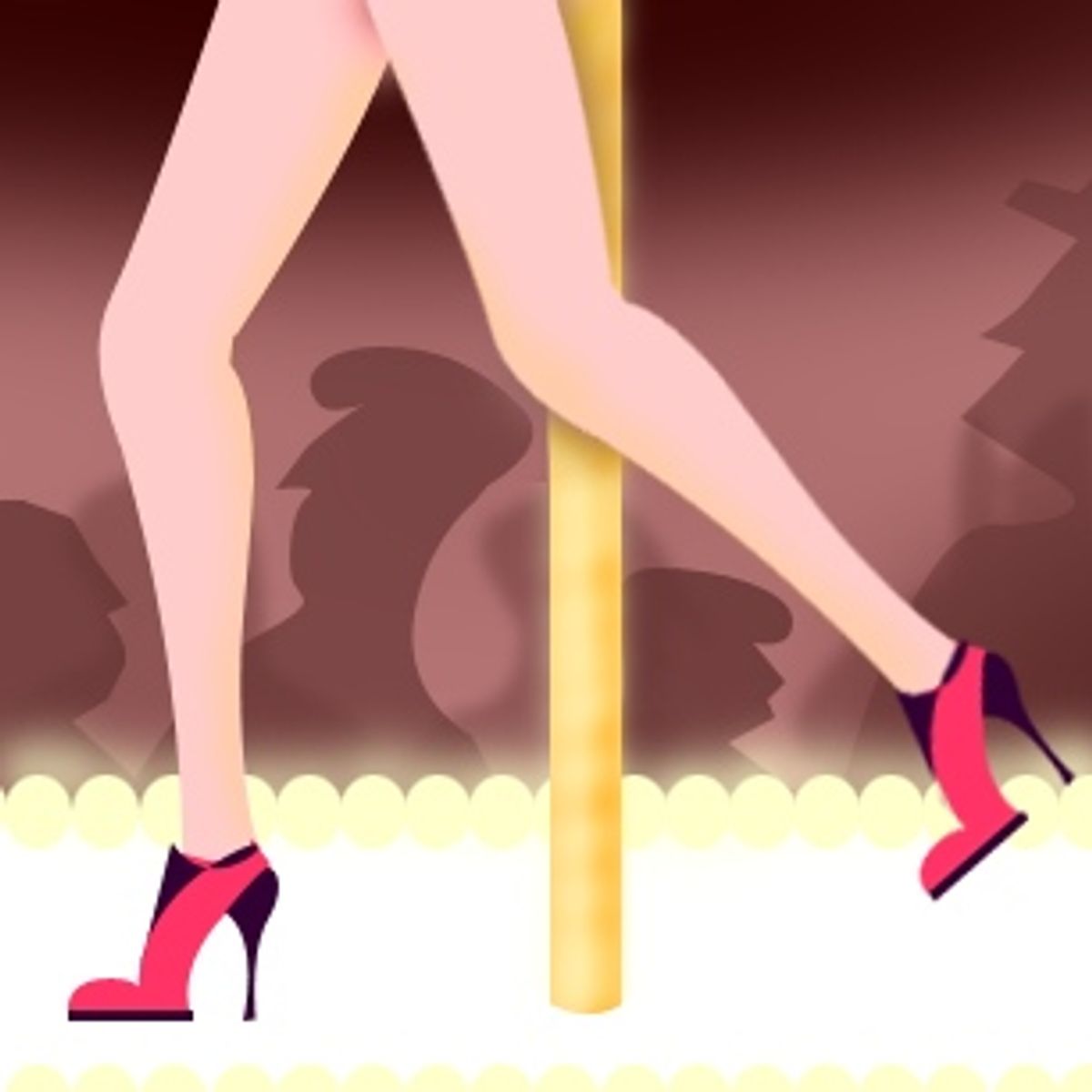 Until last week, there weren't too many places a bashful novice could go for professional striptease instruction. And what a shame that was. Because these days, a professional "house dancer" or "feature entertainer" working in a "gentleman's club" can earn upwards of $100,000 a year, sometimes a lot more. And good coin isn't the only perk. She has her days free, the work keeps her in good shape and she gets to claim her Victoria's Secret bills as a tax deduction.

The Pure Talent School of Dance recently opened its doors -- or rather, the doors belonging to Scarlett's, an "upscale gentleman's club" in Clearwater, Fla. -- to help aspiring strippers make the most of their God-given talent. Twelve young women, from Kentucky, California, New Jersey and other far-flung locations, showed up for the first day of classes.

The school is run by the Pure Talent Agency, which represents 250 adult dancers, booking them at more than 2,500 gentleman's clubs nationwide. Pure Talent plans to host its weeklong course once a month, and the owners say there is already a waiting list of aspiring entertainers.

The first 12 students showed up for their first day of class, said owner Jim Hayek, "bright-eyed and ready to learn." Hayek runs the school with his wife, Ann Marie, a former "feature entertainer" who started Pure Talent after retiring from stripping. At the Hayeks' "school of dance," the bright-eyed ones don't find ballet slippers, barres or leotards. Instead, they train with brass fire poles, colored lights, high heels and, once in a while, a fog machine. The students, ranging in age from 20 to one in her mid-30s (she declined to provide an exact age), will learn to bump and grind, work the pole, make lingering eye contact with members of the audience, choose the right music and wardrobe, get the appropriate cosmetic surgery, land magazine spreads, eat the right foods, make appearances in adult films, choose their clubs with discretion and listen quietly and attentively to clients while providing them with lap dances.

The emphasis of this specialized academy is not placed on the art of stripping, however, but on sound financial planning and carefully orchestrated career development. Because anyone can get naked, right? Well, maybe not everyone. And once naked, maybe not everyone has what it takes to get down on all fours in front of a room full of strange men.

For those willing and able, though, the greater challenge lies in parlaying that ability into a career that could very well afford them a home, freedom from the 9-to-5 grind and perhaps a brand new Lincoln Navigator each fall.

As Jim Hayek says, "A lot of these ladies have families, or are single mothers, and without this career they would maybe be on food stamps. This gives them the flexibility to spend time raising their children, something they couldn't do if they had a 9-to-5 job, making $300 a week minimum wage."

Hayek, a savvy and articulate 33-year-old with a marketing degree from the University of South Florida, is delicate and respectful when describing his milieu. The word "stripper," for instance, is never uttered. For that matter, the word "woman" is never uttered either. His clients are either "girls" or "ladies" or "dancers" or "entertainers." Mostly he calls them "ladies." Strip club? Topless bar? Definitely not. It's a "gentlemen's club." And of course, what his ladies do onstage is definitely not "stripping." It's dancing or entertaining  albeit naked.

At the Hayeks' dance academy, the day is divided between striptease instruction at Scarlett's and classroom instruction on financial and career planning. It's this information that will help students turn taking off their clothes for a living into a sustainable career that could net them -- after just one week of training -- as much money per annum as is earned by a woman who has graduated from college, made it through three years of law school and spent five years building a practice.

Classroom training begins with investment counseling. Jim Hayek brings in a special guest speaker (whom he won't name, but describes as "one of the top financial planners in the country"). The expert advises "the ladies" on creating a custom investment portfolio, setting aside money in an IRA, understanding tax laws and being aware of the differences in financial responsibility for those dancers who succeed in earning more than $150,000 a year. This type of planning is crucial, Hayek says, because most strip careers last only five or 10 years. If dancers manage their careers and their earnings carefully during those years, they can set themselves up for life.

Next, a First Amendment attorney comes in to talk about how to deal with United States pornography laws, which differ from town to town. Then comes the "career development" counseling, concentrated on two distinct areas: careers for "house dancers," who choose to perform only in one club, and careers for "feature entertainers," who hope to earn higher pay by traveling from club to club as featured attractions. These dancers spend about a week at each club and perform as many as 24 consecutive shows.

Dancers who prefer not to go on the road hear advice about how to pick the best hometown club, and then how to succeed in making themselves popular over the long haul within that hermetic environment. For the feature entertainers, the formula for creating a vibrant career is not unlike that of a movie star -- it's all about name recognition and creating a marketable image.

First of all, the dancers are advised to enter as many beauty pageants as possible, especially those whose names begin with the words "Miss Nude." Then they are to secure as many photo layouts in adult magazines as possible, with the understanding that there is definitely a magazine hierarchy. "Penthouse is the No. 1 credit for a print magazine," Hayek says. "It's the crhme de la crhme. But Cheri and Gent and Score are very valuable to them as well."

After that comes the issue that separates the, er, "ladies" from the "girls" -- appearances in adult films. "Traditionally, adult films stars get paid more money than magazine models," Hayek says. "They are a draw for the clubs." A woman who becomes known for her starring performances in adult films can often double her live appearances fee. And the amount a dancer can charge often comes down to such minutia as whether she has appeared as a "box girl" -- the girl whose photograph appears on the video packaging.

Visibility can be especially important, Hayek said, for "novelty acts" -- women whose appeal stems primarily from the staggering size of their breasts. Still, Hayek admits, adult films are not absolutely necessary to a feature entertainer's career.

Hayek's wife, Ann Marie, for example, parlayed one Playboy spread into a five-year stint leading a traveling burlesque review called Dream Girl Centerfolds and another few years as a solo dancer. She then formed Pure Talent, now one of the most respected agencies in the business. Hayek started her business in a small apartment just three years ago, and today the Hayeks own their own home, new cars and a freestanding 2,000-square-foot office building.

If all that career development talk doesn't sound very sexy, well, there's plenty of sex in the rest of the school's curriculum  including a lot of talk about the opposite sex. The stripping portion of the training is led by a big-name feature entertainer, Jade Simone St. Clair, who travels 42 weeks a year with a two-man stage crew and a trailer brimming with $50,000 in costumes and another $50,000 in fog machines, pyrotechnics and a state-of-the-art stage lighting rig. "I'm like my own little Kiss concert," St. Clair says.

St. Clair, like Jim Hayek, employs her own idiosyncratic vocabulary, sprinkling her conversation with words like "sweetie" and "baby doll." She developed this persona out of professional necessity. It is a way of turning reality into fantasy, which she says is at the very heart of the service she provides. "We tell the girls, when they walk in the front door of the club at 7, the fantasy begins. And at 2 o'clock, it's over," St. Clair says. "Because in between the walls of that club, it's fantasy time. The guys who come in to finish a business deal, or because they had a fight with their girlfriends, or because they just want to see a pretty girl dance, they want a break from their everyday life."

To help ensure that the guys' bubbles are never burst, St. Clair says, her curriculum's most important lessons is for the dancers "to keep a good attitude." This includes looking deeply into men's eyes and conducting themselves in a "classy" manner. As Jim Hayek puts it, "Walking across the club with a cigarette in your mouth, a cocktail in your hand and chewing gum in your mouth is not alluding to the fantasy that the customer came in with." And when the dancers sit with a man in hopes that he will pay for a lap dance, St. Clair encourages them to be good listeners. "Don't talk a lot, or be negative. Don't talk about bad boyfriends or say, 'I don't have enough money to pay my rent.' Make it funny, make it a party atmosphere."

Onstage technique in the new millennium, St. Clair says, is a lot more about performance and tease than it was in the '80s and early '90s. "It used to be they would be sexy for one or two songs and they got down and did table dances. Now, it's more of a tease again, back more to the burlesque days." As a result, St. Clair teaches them the full history of burlesque, starting with Gypsy Rose Lee and moving forward.

Last, but not least, comes the inevitable question: cosmetic surgery -- yes or no? St. Clair, who has had breast implant surgery, admits that "as a 'feature,' it's almost a necessity to have bigger type cleavage." She goes on, a hint of apology in her voice. "Due to the fact that over the last couple of years every 'feature' has had it [breast surgery], it is almost as if the gentlemen expect to see it."

St. Clair began her stage career in the musical theater, attending a performance high school in her home state of Texas and going on to study dance in New York with such notable instructors as Gregory Hines and the Martha Graham Dance Troupe. She gradually made her way into stripping after entering a nude beauty pageant on a dare and winning.

As earnestly as St. Clair and the Hayeks work to legitimize their profession, both stress that for many of the entertainers, moving into a more mainstream form of entertainment is often the ultimate goal. "One of our girls was used in an ad in Cosmo in December, and that's what we are looking to do more of," Jim Hayek says. "A lot of our girls are very beautiful."

St. Clair herself says her "goal for the year 2000" is to move out of working "gentlemen's clubs" and into mainstream television acting work. She says she would like to either become a host on the E! channel or a VJ on MTV. "I love to talk to people," she says.

But for now, as the primary instructor at the Pure Talent School of Dance, St. Clair finds a great deal of satisfaction in teaching "bright-eyed" young women how to overcome their natural inhibitions. "I have this little girl in here who is bashful as can be, and I want to make her into a feature," St. Clair says. "She came to class saying she wanted to learn how to be an extrovert. And today, she had to strip in front of all of us. I was so proud of her. I'm starting to feel like a mother."