My husband wants me to be a mother in a minivan. I want to be a hot mama in motorcycle boots. 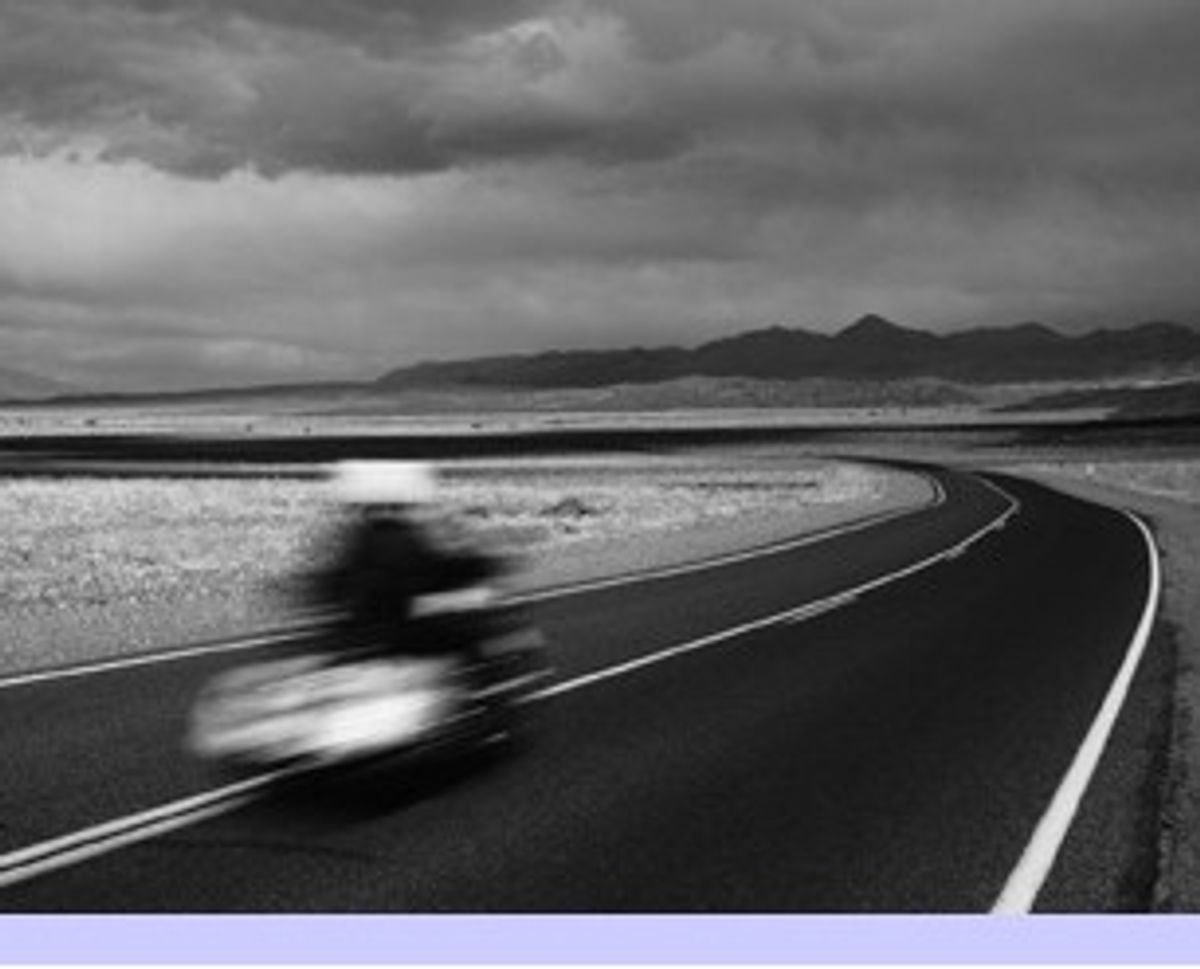 I really want this pair of motorcycle boots.

I saw them on a Victoria's Secret model. She's in the catalog.
She looks so great. She's lying on her tummy in a meadow wearing
these cool carpenter jeans, her booted feet up in the air,
careless, kicked back and sassy.

It's all in the boots.

I know that wearing them will be like taking an overdose of St.
John's Wort or being 22 again and falling in love for the first
time. Those boots will take me back to a time when life was
simple and free, when having $200 in my bank account was plenty
and ramen was the noodle and nothing really mattered because I
wasn't an adult yet and I had no idea what was coming.

I definitely need the boots.

My husband wants a minivan. He wants us to drive around town
with the kids, the bikes and the dog, with room left over for the
in-laws. He thinks our growing family needs more space, more
comfort, more car.

My friend Betsy's husband wants a minivan too, now that the
twins have arrived. "Do you think the double stroller is going to
fit into your Honda?" he asks her sarcastically.

"I don't think so," he says triumphantly -- like he's some
whiz-bang engineering genius.

What is it with husbands and minivans? And why does it reek of
keeping wives barefoot and pregnant?

I understand this. To me, driving a minivan is like going around
with a gigantic diaper bag tied to my ankle. A ball-and-chain
issue. If I drive a minivan, it's over, or worse, it has only
just begun. Forget about getting smiles from guys in other cars.
Forget about anyone following me on the highway to see who's
behind that swishy head of hair. I'll be invisible.

A minivan is the big sex appeal bye-bye machine. A minivan is a
sign that you've joined the masses. A minivan is a guarantee that
you will be picking up other people's children for the rest of
your life and teasing spit wads out of your hair forever. Your
clothes will always be stained. Your body will always be too big.
Get your hair cut short. Have it frosted. Get a subscription to
Good Housekeeping. Join the Junior League.

I just want to put on the motorcycle boots and walk away from
everything.

Have you ever considered driving past your exit on the freeway?
Stopping for gas whenever you run out, getting back in the car
and driving the same highway for as long as it goes? Have you
ever wondered if it were possible to disappear into thin air? To
become a lost citizen -- one of those people who goes from town
to town, paying cash?

How long could it last? The first night you'd find yourself in a
cold stucco motel, in a room with stained carpets, thin orange
and avocado green bedspreads and cigarette smoke clinging to
every surface. Lying there watching an "NYPD Blue" rerun on TV
would make you so lonely that all you'd want to do would be to
call home and ask how everyone was doing: Did everybody eat all
their dinner?

I'd be home the next day.

Why is it that I can't bear to be away from the people who make
me want to run away in motorcycle boots?

If I had the boots I wouldn't have to dream of leaving my family.
I'd just feel like a different person. It would be enough.
I'd be shopping in Lucky but I'd be two-stepping to the twang
of a different fiddler. You'd see me and think I was just
picking up a couple of things to throw in the back of my pick-up
before heading out of town to my ranch in Bolinas, where I play
music and paint all day. You'd envy me like I envy that
Victoria's Secret model. You'd never know that my real grocery
list was turkey dogs, wipes, Rugrats macaroni and cheese, baby
Tylenol and that clear liquid you give kids when they barf too
much.

I just can't see the motorcycle boots in the minivan.

The minivan is marriage, two kids, life insurance. The boots are
the past. They revive the me that stayed out late, hung around
with bad boys and swallowed stuff that I don't think I would
swallow today.

The boots are freedom. They are the time I didn't worry if there
wasn't enough food in the fridge or enough money in the bank. No
one depended on me or clung to me and no one peed on my office
chair because they forgot to go to the bathroom. My thoughts
percolated and bubbled uninterrupted. Sometimes I was quiet for
an entire day.

Motherhood is a gritty ordeal that would be made significantly
worse by a minivan. That Victoria's Secret model wouldn't know
where to begin with the stuff that goes down in my house. Could
she fathom waking to her baby's cries every single morning for
two years -- at 4 a.m., then again at 5 and again at 6? And each
time, could she blindly shuffle into her child's room, patiently
coaxing her back to sleep?

She could if she had the boots. And so could I. I need strength.
Not ordinary cup of coffee strength, but motorcycle boot
strength. This is strength that a minivan will not give me.

I really need those boots.

What is a fight over Barbies, a trashed makeup kit (soaked and
in the bathtub) to a woman in motorcycle boots? Nada. Bootless,
these are soul killers, events from which one takes time to
recover. But with the boots, I would power through, laughing in
the face of "she pushed me!" snickering at the trivial filth in
my path. I would arrive home, on foot perhaps (no need for a
minivan here), scoop up my children with a big brawny laugh and
bellow: "Mama's home!"