Extra-large, eat your heart out

Sanary-sur-Mer hosts the world's largest bouillabaisse. And lives to tell. 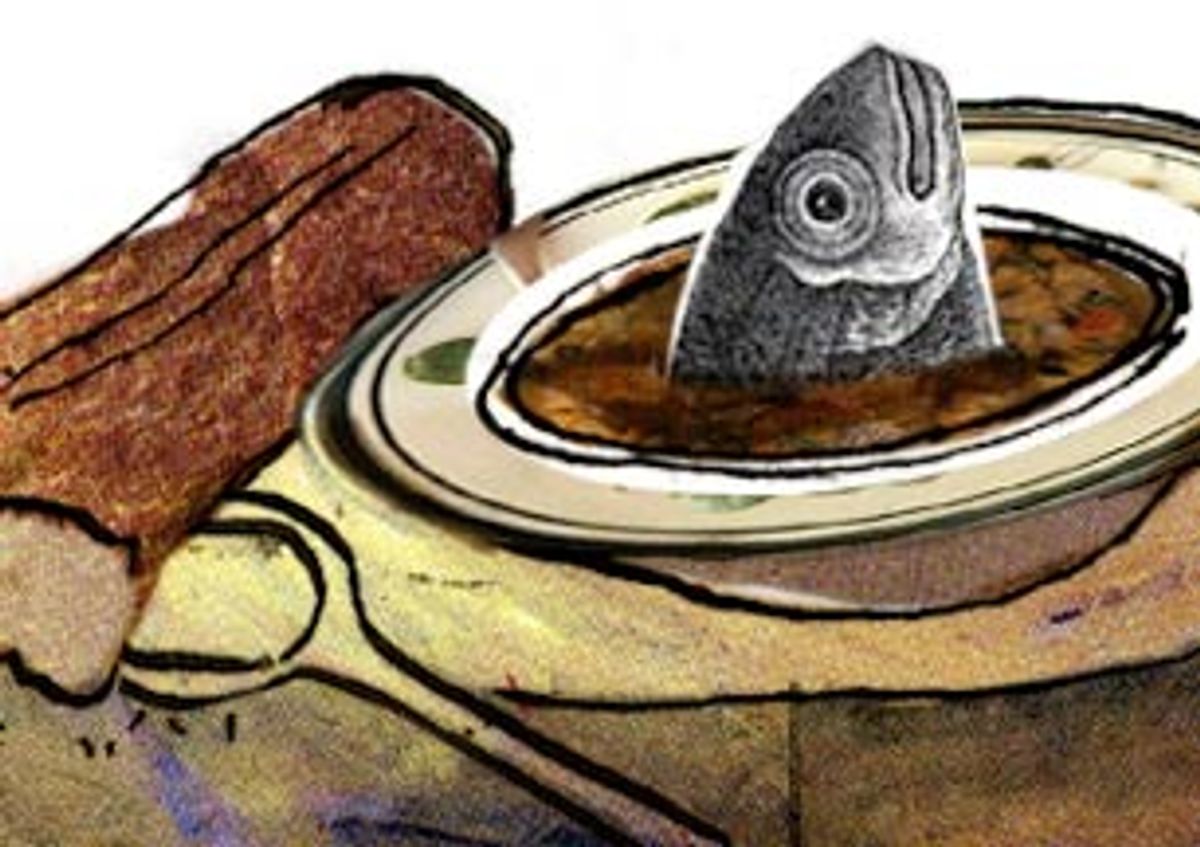 Lucien Vitiello, the leading fisherman of Sanary-sur-Mer, a
pretty town on the French Mediterranean coast near Toulon, began
making preparations for the world's largest bouillabaisse weeks
ahead of time. My intimate involvement began only the day before
that last Sunday in June when, as it has been for the past 10
years now, this momentous feeding took place.

When I say the world's largest bouillabaisse, I mean a
bouillabaisse that has been certified by "The Guinness Book of
Records" as such. I mean a bouillabaisse large enough to serve
1,500 people. I mean a steel marmite or cauldron nine and a half feet in
diameter weighing 1,300 pounds in which to cook the
bouillabaisse. It looks like a backyard swimming pool, and it
was specially forged for this annual extravaganza. It has to be
placed by crane on a fire made of 140 cubic feet of wood in a
roped-off area on what is usually Sanary's main parking lot.

I mean a bouillabaisse that requires 2,200 pounds of fish. I
mean a recipe that asks for 15 quarts of olive oil, 1 1/2 pounds
of saffron, 650 pounds of potatoes, 35 pounds of garlic, 65
gallons of fish stock, 5 log-sized bouquets garnis and 10 pounds
of salt, not to mention Pantagruelian portions of tomatoes,
pepper and onions. I mean a very big bouillabaisse. Lucien and
his fellow fishermen ask 125 francs per person (about $19), and the profits
benefit the Prud'homie, the fishermen's union. With your entry
ticket, you receive a hefty portion of the bouillabaisse --
served in two stages, as always, broth first and then the fish --
bread, salad, aperitif, cheese, desert and all the wine you can
drink.

Before I came to Sanary-sur-Mer, I had never eaten bouillabaisse.
In fact, I wasn't even sure what it was. I imagined it as a
kind of fish stew. That is incorrect, I discovered. Stew, with
its connotations of long, languid simmering, is the wrong idea
altogether. Bouillabaisse is cooked rapidly over a very hot
fire -- once it reaches a boil, it's done -- and must be served
immediately. It is magic, a flourish, a grand show, full of
saffron, scents and the bounty of the Mediterranean, as well as
the South of France's elixirs -- olive oil, garlic and tomatoes.
It is a dish that should be served to many people. It does not
retain its character and ability to delight so well when just
three or four people are present. So why not 1,500
guests?

On the day of the great event, many of Lucien's friends met at
Sanary's quay at 5 a.m. to unload, separate and wash the 2,000
pounds of fish that would be cooked and eaten later. The morning
air was cool and soft and delicious to smell. It was light even
at this hour, the port was placid and the water limpid. Many
of the men at the quay at that early hour I did not know, or had
only seen and had never met. They came to be part of something
magnificent. The small town of Sanary-sur-Mer, which curves
itself to accommodate the half moon shape of the harbor, looked
like a Utrillo painting in the fresh gray light. I had come to
Sanary eight months earlier to work with these fishermen and to
write about them. This was a delightful and quirky conclusion to
this sojourn.

We all began to separate the semi-frozen fish. The fish were
still in the boxes from the wholesale market in Toulon, and they
cracked apart sometimes reluctantly. It was impossible for the
fishermen to guarantee supplying enough of the required fish from
their own nets, so Lucien had to purchase more from a market. We
washed the frigid fish off by dunking them in big buckets of
water. There they were, all together, all at once, the most
heralded, fabled, delicious fish of the Mediterranean -- St.
Pierre, with its black thumbprint on its side; the arm-thick
congre, or eel; the famed rascasse, which plays an important role
in Marcel Pagnol's book, "My Father's Glory"; the lethal vive;
the very expensive lotte; the ridiculous-looking galinette. They
were all there, all the fish I'd seen throughout the year, hauled
up in the fishermen's nets and then sold by the fishermen's
wives. I handled them affectionately.

I saw familiar faces. The irrepressible octogenarian Louis
Berenger was there, barefoot and talking away. So was Lucien's
misanthropic cousin, Achille, working steadily and issuing gruff
pronouncements. So was Jeannot, Lucien's mate, and Georges
Bollani and even the doleful Henri. He and I had dived for sea
urchins one cold morning. As I worked, I would glance up from
time to time at the tall, stately palm trees and gaze. At 7
a.m., we stopped to have a casse croute, a meal of bread, cheese,
salami, pati, wine and pastis.

Throughout the morning, Lucien more than rose to the daunting
task of feeding 1,500 people in just a few hours. This was
Napoleon before a great battle -- serene, encouraging, masterful.
We all worked confidently under his generalship. Most everyone
went home after the casse croute. We all had that satisfying
fatigue you have when you start work well before sunrise. After
retrieving stray fish and swabbing the stone quay, there was
little to do until 11 a.m. Then we were to meet at Sanary's
parking lot near the end of the port to begin cooking
this monster bouillabaisse.

After a few hours' rest, I strolled over to the parking lot at
the appointed time. It had been completely transformed. In the
epicenter was a gulliveresque pile of neatly stacked firewood.
The marmite was lowered with great delicacy by a crane onto the
wood. Then we -- at least 20 of us -- began adding the
ingredients. The bouillabaisse itself was so big it was
laughable. Just the idea of seeing 650 pounds of sliced potatoes
added to the pot still makes me laugh. Not to mention the 35
pounds of garlic and the 10 pounds of salt. (No, the
bouillabaisse wasn't too salty.) Georges Bolloni, the jester of
the fishermen, generously added water with a hose. In less time
than I had imagined, we were ready.

About noon, some authoritarian-looking firefighters arrived and
positioned themselves formally around the cauldron ready at a
moment's notice to douse the fire if things really got out of
hand. The mayor was there to do the honors. He was almost
burned to a crisp during the ceremonial lighting of the fire when
the wind suddenly shifted, but he managed a hasty retreat just in
time. The fire grew without incident. Spectators watched from
behind the ropes, wide-eyed. In about an hour, the thing began
to boil. The bouillabaisse was cooked!

The marmite was lifted by the crane from its fire. It was
deposited a short distance away, easily and carefully, onto a
large metal stand. Next to it was a giant tent, capable of
shading the 1,500 hungry ticket holders. Scores of tables had
been set up under its cover. Serving began immediately. It was
surprisingly efficient, too, with all the fishermen and their
wives pitching in. Everyone got their fair share and more. I
have to admit, I wasn't expecting the highest quality -- how
could anything made to feed 1,500 people be that good? -- but it
was delicious. Yes, indeed. Speeches were made by the mayor and
by Lucien and by others, and people ate and drank and laughed. A
recording of Fernandel singing the song, "Ah, c'est bonne, la
bouillabaisse!" played over and over again.

A communal feeling swept over this large crowd. Everyone struck
up conversations with their neighbors. Total strangers exchanged
kisses. You could say it was the freely poured wine, but it was
something else, too. It was the idea of it all, the sheer
exuberant vision of the thing, that brought us together. What a
grand day! The last diners -- Lucien, some fishermen from Bandol
and myself -- left around 6 p.m. Then the clochards -- the town
drunks -- came with broken-down pots and scooped up the last
puddles. They were welcome. There was enough for all. In the
end, the bouillabaisse was completely gone. A ton of fish, gone
in a few hours!

The day wasn't over, though. Lucien wasn't content to have
served the world's largest bouillabaisse. He invited a throng
over for dinner that evening, and many of us ended
up at his house in the hills talking and laughing late into the
beautiful cool French night. It was a moment of glory for
Lucien, as well it should have been. I was happy for him that it
had gone so well and that the weather had been perfect and that
so many people had come.

"What about some more red?" he asked, reaching for the bottle.

He poured. "You'll come back for next year's bouilla, won't
you?" he asked.

But I did. It's just the way these things go. Lucien still
sends me an invitation every year, though. And he always writes
a little note. He says that maybe I'll come this year. "On sait
jamais," he inevitably adds. You never know.

Richard Goodman wrote the book "French Dirt: The Story of a Garden in the South of France."