No phone, no lights, no motorcar -- not a single luxury! Leonardo DiCaprio and the "Trainspotting" creators can't rescue Alex Garland's trouble-in-paradise bestseller from trite moralizing. 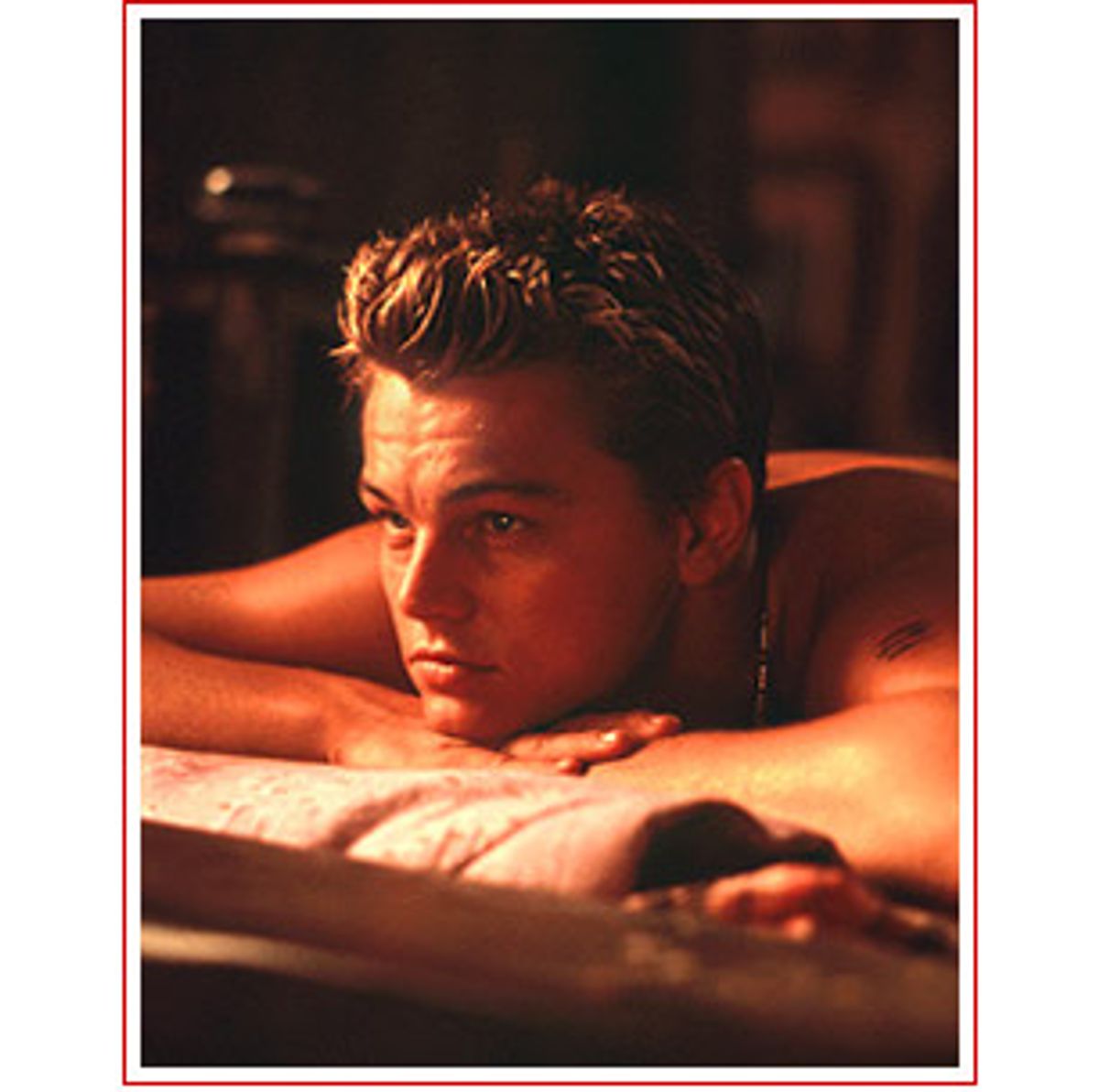 Picture, if you dare, an island community peopled by post-adolescents running around in those long shorts that aren't quite pants and necklaces made out of little shells: The dark side of human nature is indeed terrifying.

But Danny Boyle's "The Beach," based on British novelist Alex Garland's 1997 Utopia-gone-wrong bestseller, doesn't stop there. On this particular island, with no phones, no lights, no motorcars, citizens catch their own fish for food and laze around or play volleyball the rest of the time. A Gordon Lightfoot-gone-native troubadour makes music for them on his battered acoustic guitar. They wear clothing made of cotton and other natural fibers, yet all of them have forgotten what an iron looks like. They're living as God intended, and we're the ones made to suffer for it.

The message of "The Beach," both the movie and the book it's based on, is that technology and other stuff you have to plug in have disconnected us from our true natures -- but if we ever have the opportunity to let our freak flags fly, we must be prepared for the dark secrets we might unearth. For anyone who ever read "Lord of the Flies," or even just the Cliffs Notes, that's nothing we haven't heard before.

But there's always the possibility that a good director might elevate lackluster material. Boyle just doesn't rise to the challenge. His "Beach" lacks imagination and energy, two things that might have distracted us, at least occasionally, from the material's tepidness. Instead, he now and then simply jabs electrodes into the movie to try to bring it to life, borrowing some of the quicksilver editing techniques and music-video hyperkinesis he used so beautifully in his brilliant second picture, "Trainspotting," and in the highly underrated "A Life Less Ordinary." "The Beach" lurches along, informed by a kind of forced lyricism -- and even that seems to be driven mostly by all that white sand and blue water, the movie's most resonant images (the handiwork of Darius Khondji, who also shot "City of Lost Children").

Of course, on some level, "The Beach" is nothing more than a star vehicle for Leonardo DiCaprio. Although he's appeared in two pictures since "Titanic" -- "The Man in the Iron Mask" and "Celebrity" -- this is the first role he's taken since superstardom tapped him with its mighty scepter. Not so long ago, DiCaprio was one of the finest and most exciting actors movie audiences could have hoped for, and on the basis of "What's Eating Gilbert Grape" and "This Boy's Life" alone, it will be a long time before I'm ready to give up on him.

But as Richard in "The Beach," he does little more than strut around, pouting and frowning in his Phish wear. His character may not be particularly well written in the first place (the screenplay was adapted by Boyle's longtime collaborator, John Hodge), but all of DiCaprio's natural appeal is submerged here.

It doesn't help much that the story, with its muddled modern moralism, goes nowhere fast. Richard is a footloose young American backpacker who arrives in Bangkok, clearly to check out its "otherness" and, with any luck, find himself in the process. In his cheap hotel he meets Daffy (Robert Carlyle, basically reprising his hothead role from "Trainspotting," only this time making it cartoonish and grating), who tells him about an incredible secluded island, where a secret community of people live in natural harmony, sort of. He then entrusts Richard with a map, which Richard shares with the nice-looking French strangers in the room next door, Etienne and Frangoise (Guillaume Canet and Virginie Ledoyen, the French actress who's shown a wonderful crispness in pictures like Benont Jacquot's "A Single Girl" and Olivier Assayas' "Late August, Early September," but who has little to do here). The three set out to find the island together.

They finally reach it, and it ain't easy: A glorious field of pot plants, fiercely guarded by a cadre of gun-toting natives, is just one of the obstacles. Once our three pilgrims have arrived, however, they become entranced by the allegedly content and enlightened group of tree-hugging, fish-spearing individuals who've settled there and the simple life they lead. (The pot guards allow them to stay on the island, on the condition that they don't let anyone else in.) Of course, danger lurks -- you might guess that in the way the group's scary ringleader, the vaguely reptilian Tilda Swinton (wearing a bindi and other types of mysterious face paint, when what she could really use is a good mascara), refuses to let one poor sod go to the mainland to see a dentist. Instead, she allows the other island inhabitants to descend on him with glee, yanking out his bad tooth with a pair of pliers. Foreshadowing? You bet!

But we never understand why Richard and his friends are so taken with this community in the first place, other than the fact that the setting is idyllic. The island inhabitants are a faceless crew. The only one who stands out is Paterson Joseph as Keaty, who, beneath his dreadlocks, is English to the core -- he's still interested enough in civilization to keep up with the cricket scores.

These people are misguided innocents who are nice enough, but basically vapid, as if the movie thinks that's the kind of community Today's Youth Culture desires (and I don't think it is). But there's never enough tension in "The Beach" to make its major conflicts work. The temptation to give in to the more savage side of human nature -- the struggle that Richard himself eventually faces, restaging his own private "Apocalypse Now" inside his muddled head -- ends up being almost completely pointless, nothing more than a vehicle to drive us toward the movie's climax.

And that, too, is woefully inert. In the book, at least you get a nice bloody skirmish. "The Beach" wouldn't be a better movie if it were more visceral, more bloodthirsty, but it would at least make a little more sense. As it is, all we're left to chew on are the age-old themes of man vs. nature, man vs. man and man vs. himself. Maybe it's time he found some new opponents. Or at least started wearing longer pants.