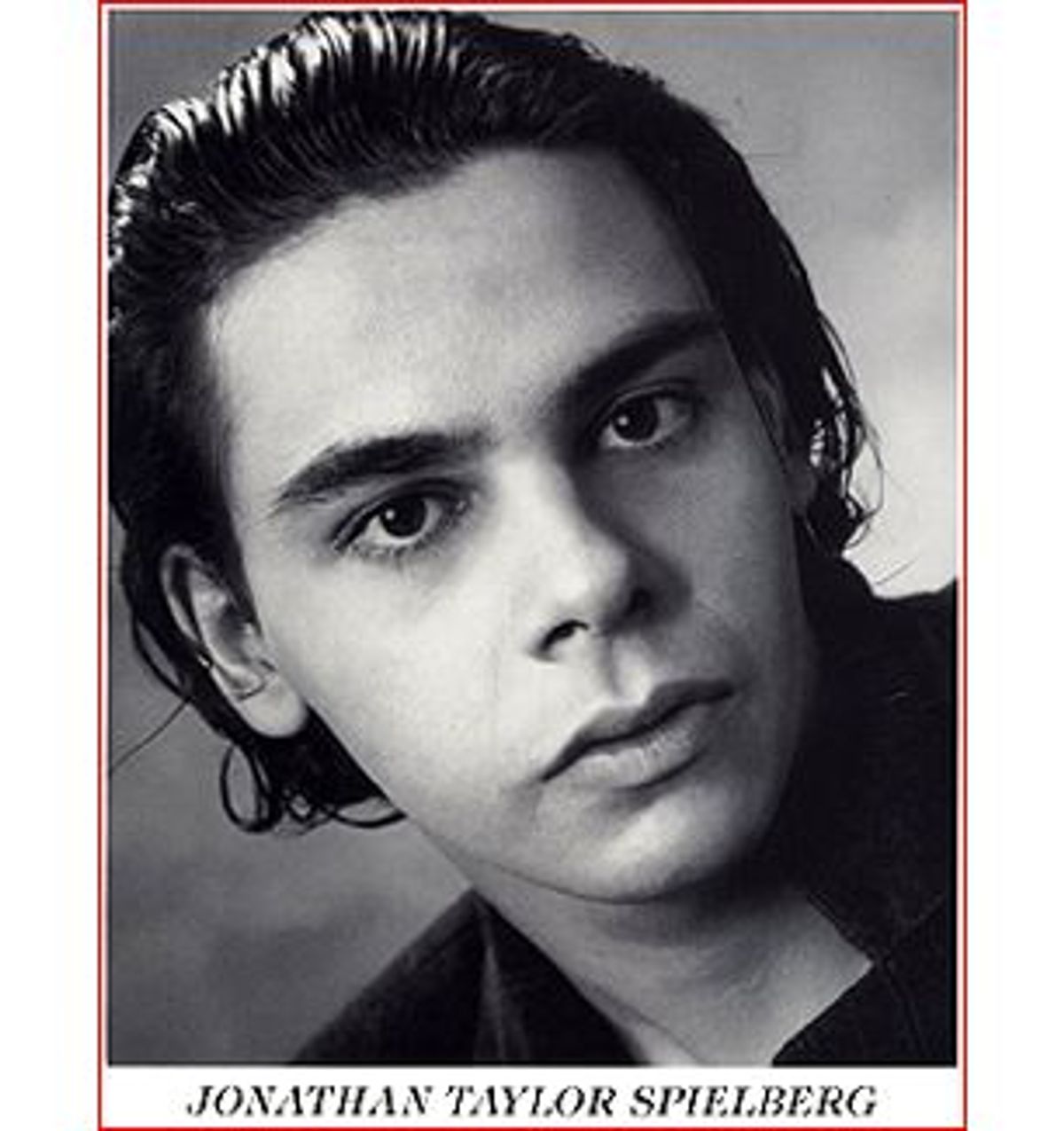 Jonathan Taylor Spielberg, ni Anoushirvan Fakhran, was already going by the name that he would legally switch to a year later -- a name that has gotten him arrested three times in the past month in Fairfax City, Va. Authorities there allege that the Iranian-born man was just pretending to be related to the famous director.

According to the Washington Post, which broke the story Feb. 7, Fakhran is 27 and changed his name in 1997. He has claimed to be as young as 16.

In any case, being Spielberg's "nephew" is what got him admitted to Paul VI, a small, tony Catholic prep school in Fairfax City. The Post reported that the school's principal believed Fakhran's story
(he claimed to be researching a film role) and graciously waived tuition. The young man was even allowed to park his blue BMW with the vanity plate "SPLBERG" in the principal's assigned spot. Fakhran, who's free on bail, faces charges that he defrauded Paul VI.

Lobkowicz also believed Fakhran's story when the darkly handsome young man approached him three years ago with an unusual request.

(The Century Wilshire Hotel's management confirmed that Block's show was at one time shot there. It could not, however, verify whether "Jonathan Taylor Spielberg" ever resided at the hotel with his mother.)

Lobkowicz now has over six hours of Fakhran on video. Some of it shows him being interviewed by Block and another woman on Block's trademark bed (the setting of her weekly TV shows, from which she interviews authors and celebrities and takes viewer calls while dressed in lingerie). Most of the footage, however, shows Fakhran, dressed in black pumps, sheer stockings and a miniskirt, playing a transvestite attempting to pass as a woman in a lesbian bar.

"There's no dialogue," explains Lobkowicz, who bears a slight resemblance to actor Peter Boyle, before cueing the tape. "We were planning to have a voice-over. What happens is that he comes into a bar and meets these lesbian women. Ultimately they discover him. Up until then, they're touching him and seducing him. Afterwards, they take him into this shower, and all sorts of stuff goes on."

"Jonathan loves girls," interjects Lobkowicz. "And they love him. He's really not a transvestite. It's just a role he wanted to play."

And Fakhran plays it to the hilt. Two of the lesbians drag him off to the bathroom where they give him an impromptu "inspection." Then the party really gets rolling.

"Nice stuff, eh?" says Lobkowicz, sipping coffee. "We were thinking of entering it in one of the festivals -- like Sundance -- as a short. Jonathan wrote the story and directed the whole thing. We were only the crew, really."

Later in the tape Fakhran plays the voyeur as a luscious blond rips off the pants of a male bartender who has apparently followed them into the restroom. Block gets back into the action by lifting Fakhran's skirt to give his hairy bum a playful series of smacks with a leather belt. She then takes off his shoes and moves him into the shower. With mascara running down his face, Fakhran stands under the water, making a gesture of victory and mouthing the word "Yes!"

"I got to know him very well," says Lobkowicz while changing tapes. "He was a very gentle, very sweet man. I never thought he was lying. He said that the Spielbergs didn't want anything to do with him because he's Iranian and there's that whole Jewish thing going on. It made sense to me."

During his appearance on Block's TV show, Fakhran is sandwiched between Block and the blond bombshell from the video. Block is wearing a large white hat, black bra and matching panties. Fakhran is dressed in jeans and, ironically, a white Planet Hollywood sweatshirt. While playing with Block's pet snake, they discuss Fakhran's desire to be an actor, his virginity and the members of the famous family he claims as his own.

"I loved your last movie," Block jokes. She then asks him about his "Uncle Steven."

"Why don't you say hello to him?" prompts Block.

Fakhran then brags a bit about his credits, which he says include some modeling and extra work playing a female model in Robert Altman's 1994 film "Ready to Wear."

Lobkowicz says he and his wife have stayed in touch with Fakhran, and that the young man calls them every six months or so. He never mentioned going to the Catholic prep school but did tell them he was striving to make his family happy by going to college, with the goal of becoming a doctor. Lobkowicz says they have a number for Fakhran, and that they tried calling him when they read of his recent legal troubles. There was no answer.

However, Fakhran did leave behind a black-and-white 8-by-5 glossy head shot with the name "Jonathan Taylor Spielberg" printed underneath. Lobkowicz also kept other photos Fakhran left behind, snapshots of himself and his well-heeled, attractive mom. And there's a card inscribed "With love to mom and dad," which seems to have accompanied some flowers he gave them. (Lobkowicz says Fakhran often affectionately referred to him and Block as "Mom and Dad.")

"When we met him and his mother at the hotel, he said they were staying there because they were remodeling their condominium," says Lobkowicz. "He was preparing to go off to be a doctor. But he also wanted to be an actor. That's always what he talked about. After a couple of months he left. He said his family wanted him to be an M.D."

Lobkowicz describes Fakhran as a "collector of experiences" and suggests that he may have been "practicing" for a future career as a con man or an actor. The line between the two is often rather thin.

"I think he wanted to see if he could pull it off in real life," says Lobkowicz. "A lot of actors do that kind of thing. It's not that unusual. In any case, I can't see this man doing anything really bad."

Lobkowicz also believes there's more to this story than meets the eye and wonders why Fakhran is being harassed by the police in Virginia. After all, no one has yet suggested that Fakhran swindled anyone out of cash.

"Money was the least of his problems," says Lobkowicz. "He and his family had a lot of money, and he was always dressed well. He never talked about money. It was like, 'I'm a Spielberg, don't worry about it.'"

But according to a recent Washington Post story, Fairfax City police detectives testified in court that Fakhran admitted to them that he has no relative named Spielberg and that his father was in jail in Iran.

"Whatever he is, he did a wonderful piece," says Lobkowicz. "It's one of the best things in my video library, and I've got tons of stuff. I don't care who he is. He's a great filmmaker."