Iran's revolution may be in jeopardy

Will the overwhelming number of young voters tip the scales in the elections? Or will their apathy prove a greater threat to reformers than the mullahs? 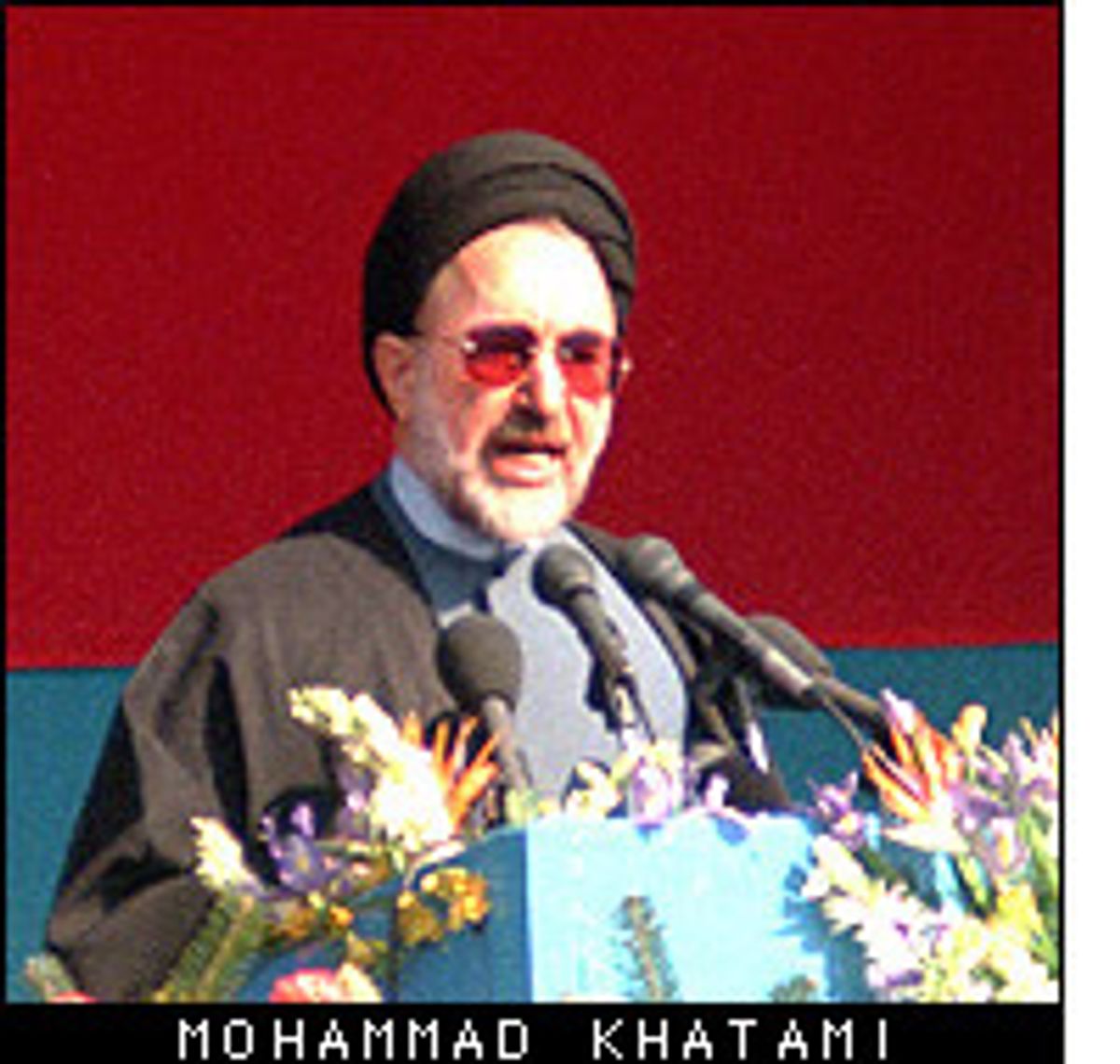 Twenty-one years since hundreds of thousands of students stormed Tehran's streets and ousted Shah, Mohammed Reza Pahlavi, their revolution is being put to the test Friday. In the most freewheeling elections Iran has ever held, thousands of candidates are vying for 290 seats in the majlis or parliament, in a vote that could once again change life for Iranians. Many are expecting young voters, eager for reform, to tip the scales in the election. Iran's population is one of the youngest in the world -- about 70 percent are under 30.

Arriving in Iran to cover the elections, I expected to find a country whose hardcore Muslim rules could not possibly withstand the reality of a globalized new century. After all, heretical talk of sexual pleasure is only a mouse-click away on the Internet. Instead, despite the scene at Shemshak's slopes, a walk through Tehran shows that the revolution is far more set in place than all the talk of change might suggest.

"I have only one thing to say to you," says Marjam Mahmoudi, outside a food stand at Shemshak ski slope, an hour's drive north of Tehran. "Iran is bad. Bad," she says in a low voice. She adds, "Personally, I haven't felt very many limitations from the Islamic government." But that statement belies experiences that have pushed her to seek a life elsewhere.

While the Muslim call to prayer wails over the loudspeakers, Marjam, 25, then recounts the afternoon two years ago, when she was walking home from an English class through Tehran's streets, and passed a small van loaded with police. "They shouted at me for having makeup on. They told me to get inside and wipe it off," she says. The moment the van door closed, the driver sped off to the police station, where Marjam was arrested for indecency, along with other women who had been picked off the streets that afternoon. Her lipstick removed, she spent the night in a cell. The next morning, a judge declared her innocent and sent her home.

Not long after, her fondness for lipstick led to a second arrest on the street. And right after that, her father hired a lawyer to get her a green card for the United States, where her aunts and uncles have lived for decades. "I leave for Los Angeles in April," she says.

This is ski season in Iran. And for a taste of how much -- and how little -- has changed after two decades of Islamic rule, there are few better places to go than the slopes of Shemshak. Here, the rich kids of Tehran -- children of Tehran's engineers, shipping brokers, company managers and doctors -- trudge up the snow-packed paths from their cars in their North Face jackets and Salomon ski gear, their snowboards and skis tucked under their arms.

On a billboard at the gate, a larger-than-life President Muhammad Khatami declares that sport is good for the mind and body, and that "I support it." Inside, the lines for the ski lifts are segregated, and the one for men dwarfs the women's line, where some of their girlfriends stand. It is not perfect, says Marjam. But there are no police. Rather unique in Iran, it is a place where you can almost forget you live in the Islamic revolution.

The city's streets are still thick with lusciously colorful murals depicting the revolution's leader, Ayatollah Ruhollah Khomeini, and his successor, Ayatollah Ali Khamenei. Their faces hover under slogans about the virtues of the revolution and celebrating the 100th birthday of "the Imam," as Iranians call the adored Khomeini.

It has been three years since Khatami was swept to power by more than 20 million voters, many of them women. Like Marjam, many of those women had simply become exhausted by the continual prying and harrassment. Yet even today, no woman -- Iranian or foreign -- dares walk out the door without a scarf tightly framing her face, or a coat that drops below her knees.

Men and women ride separately back to Tehran from the ski slopes, to avoid being arrested at checkpoints by police demanding to know whether they are married. Buses are still segregated, many with metal grids separating the women at the back from the men up front. Western music is banned; so is satellite television. Women are still forbidden from singing in public, although one of Tehran's favorite chanteuses performed this week -- to a women-only audience.

Friday's election has hundreds of liberal candidates, who have fought a brief campaign on a platform of loosening the grip of the mullahs, or conservative clerics. But Iran's ruling committee of 12 clerics have vetted each of 6,083 people who registered as candidates -- most complete unknowns to Iranian voters -- and banned 576 of them from running for office. That is likely to stop the reformists from taking total control of parliament, and upturning many of the more suffocating rules.

When I ask Ebrahim Yazdi, the general secretary of one of Iran's biggest reformist parties, why he was kicked off the ballot, he tells me: "They said I wasn't a believer of Islam." Yazdi was exiled by the Shah's government and finally returned with the Ayatollah Khomeini himself. He still has a sense of humor about his predicament. "I don't really know how exactly they measured my belief, or disbelief," he says.

But reformists face another threat as well: voter apathy.

Back at the ski slopes I ask a group of Tehran University students who is planning to vote. Only two out of six say they are. "I voted for Khatami, and what happened? Nothing," says Asal Etemod, 22.

Such cynicism among the influentially large population of young people is perhaps a far trickier problem for Iran's reform movement than even the most scowling hardcore conservatives, whose faces grace thousands of election pamphlets littering Tehran's streets.

"Of course I would vote for Khatami's supporters," says Guisya Amini, 19, waiting to board a ski lift with a girlfriend. "But I would not even bother to vote, because I will not get what I want." What is that, I ask? "This! I want this off!" she shouted, tugging at a woolen head-scarf tied around her chin. "I want discos! I want music! I want to have fun with my boyfriend!"

Born after the revolution, Amini has lost whatever zeal she might ever have had for its cause. What the generation after hers will make of that cause remains to be seen.

On Thursday afternoon, teachers led a class of third-grade girls around one of the Shah's grandest palaces, now a museum stuffed with mammoth Persian rugs and Venetian crystal chandeliers, perched atop a snowy mountain in North Tehran.

Asked what she made of the revolution, one 9-year-old, crooked teeth grinning from a white veil, said, "They kicked out the Shah, because he didn't care about the people."

Time will tell whether her generation will conclude the same thing about the revolutionaries.