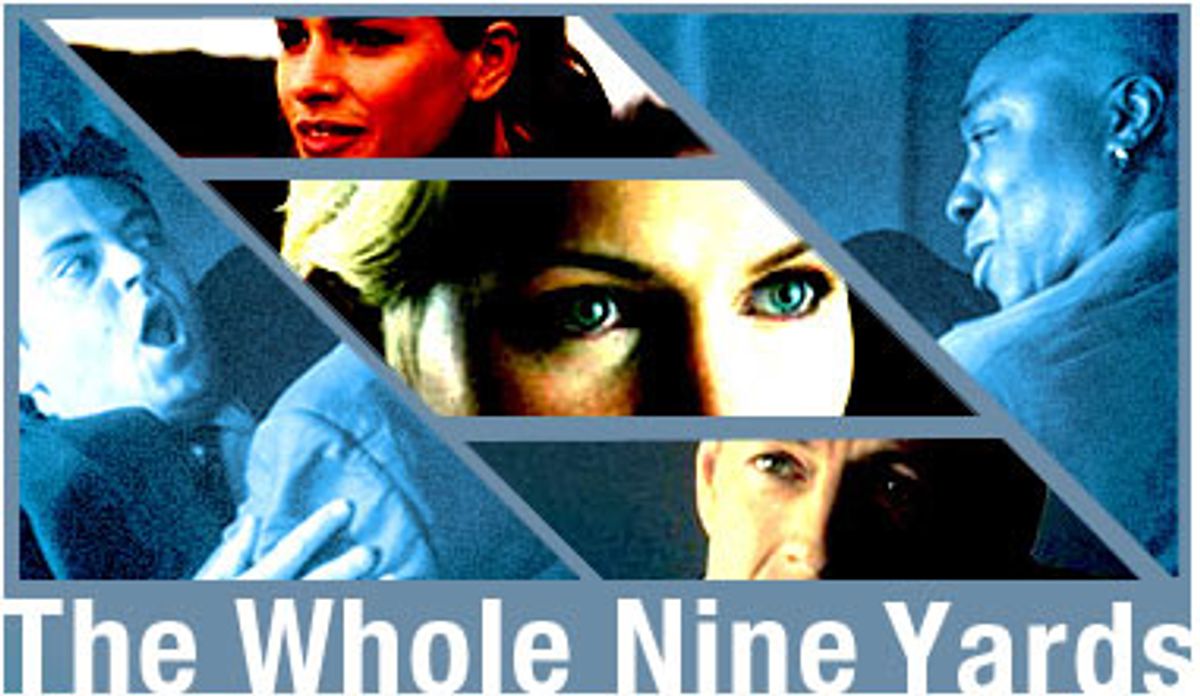 Plenty of Hollywood movies are made in Canada to save money on production costs (thanks to inexpensive union labor and the incredible shrinking Canadian dollar). But "The Whole Nine Yards" may be the first to try to turn its cheapness into a virtue. I guess there's something to be said for setting a movie in Montreal if you're filming it there, instead of trying to pass off the city as, say, Dallas or Milwaukee. But this labored gangster farce, a star vehicle for Bruce Willis, doesn't make any hay with its French-Canadian setting, which only adds to the dreary, halfhearted atmosphere. Judging from the dull light that pervades every scene, "The Whole Nine Yards" wasn't just all shot in the same place, it was all shot on the same day.

English director Jonathan Lynn (the auteur behind "My Cousin Vinny" and "Nuns on the Run") squanders several agreeable comic performances -- or at least several disconnected fragments of them -- on an atrocious script by Mitchell Kapner. The result is an ungainly hybrid beast: a lumbering dinosaur disguised as a butterfly. The type of farce that treats coldblooded murder as a laughing matter needs to be fleet of foot, gamboling from shot to shot and quip to quip before we notice that it has no operating logic, nothing to say and no moral point of view. It can shock with outrageous cruelty (like the Coen brothers' "Fargo") or retain just the faintest hint of menace beneath its good-time shtick (like "Analyze This"). But "The Whole Nine Yards" just plods through its increasingly dismal paces until the phony vivacity of its stars has drained away completely. In five months, airline audiences will be dozing and drooling.

As a suburban dentist/doofus who winds up living next to an infamous Chicago hit man on the run, Matthew Perry does everything he can to liven up the proceedings. Perry's Nicholas Ozeransky (or "Oz"), clad in ballooning oxford shirts and baggy pleated chinos, is constantly diving over furniture, running into doors and demonstrating a complex repertoire of spit takes, exaggerated gulps and dumbfounded glares. Willis, who seems to have borrowed Tony Soprano's wardrobe, is also a pleasant presence, playing Jimmy "The Tulip" Tudeski as a wry professional who genuinely likes people, some of whom he has killed.

Oz hates his life, Jimmy likes his and these two misfits kinda like each other. That's the basic gag in "The Whole Nine Yards" and it's all right as far as it goes, but that's not very far. The funniest thing in the whole movie comes when Perry can't even get his car out of the driveway without stopping three times to bash his head against the steering wheel in frustration, unbuckling and rebuckling his seat belt each time. Oz's bitchy Francophone wife, Sophie (a totally wasted effort from Rosanna Arquette), persuades him to fly to Chicago to rat out Jimmy to the Hungarian mobster (Kevin Pollak) who wants him dead. As it turns out, Sophie really wants Oz dead for the insurance money and sees Jimmy's presence in the neighborhood as her golden opportunity.

Maybe all this exposition would work if it took 10 minutes, but by this point we're halfway through the film with plenty more of the elaborate plot to come, most of it involving the murders of characters we can barely identify, let alone give a crap about. While Oz is in Chicago (which is, as is painfully obvious, really still Montreal) he meets Jimmy's wife, Cynthia (Natasha Henstridge), who is meant to be the femme fatale who changes his life.

Cynthia is a tall, cool drink of parsley juice. A former fashion model who was perfect as the half-alien monster of "Species," Henstridge is probably beautiful in some clinical, scientific definition of the term. But there's something astringent and, to my sensibility, totally unsexy about her. At the film's highest romantic pitch, when Cynthia tells Oz, "I would love to marry you," she sounds like a woman making a crucial decision about Venetian blinds. If you want to call what Henstridge does acting, she plays Cynthia as an athletic gal with terrific common sense who's being a good sport about wearing fancy rich-lady clothes to some costume party. I guess some guys really go for that.

One of the underlying principles of mainstream moviemaking is that when you bump a couple of hotties against each other, some basic hormonal magic kicks in -- for the characters, the actors and the audience. But the pairing of the arguably attractive Perry and Henstridge results in some kind of negative energy vortex. Their grappling scenes reminded me of watching the captain of the girls volleyball team wrestle her springer spaniel. You could get more electricity off a hamster wheel.

Those of you on flight 618 who really can't sleep will find a few touches to keep you watching. The longer Amanda Peet is in the film, playing a dental assistant who turns out to be an enthusiastic apprentice hit woman, the better she gets. Peet looks as vapid as Henstridge, but turns out to be an appealing tomboy comedian with just a touch of sexy slither.

Long after I had concluded that "The Whole Nine Yards" was stupid, empty and -- worst of all -- fantastically boring, a couple of Canadian actors named Sean Devine and Richard Jutras showed up as cops and stole a late scene with their blank, flat-out-weird comic timing. This led me to a frightening conclusion: This movie would have been funnier if it had been more Canadian.