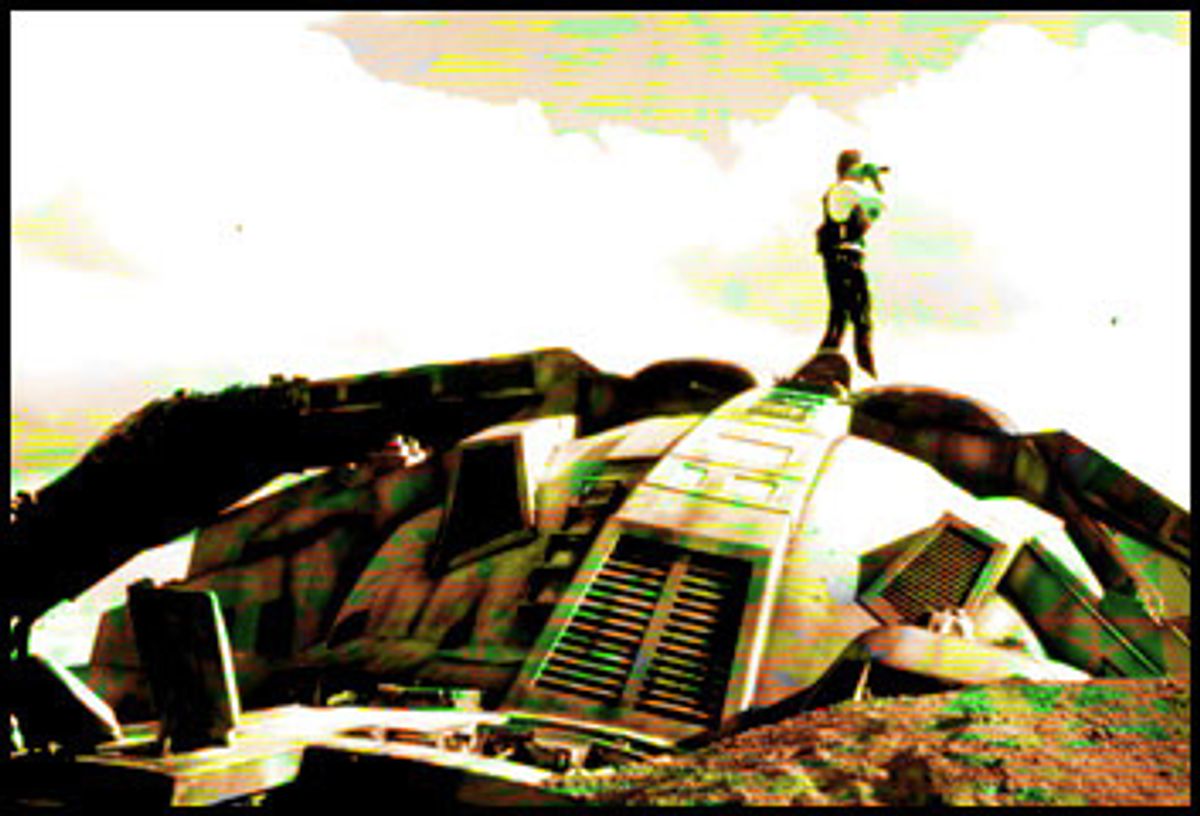 Packed with razzle-dazzle special effects and fueled with aggressive,
hyperactive cinematography and a pulse-pounding narrative that never lets
the tension subside until the final frame, "Pitch Black" is the movie of the
season for sci-fi and horror fans. I'm not going to try to convince you that
this tale of a group of space-crash survivors facing unknown danger on a
mysterious planet is a greatly original work. Although it's the splashiest
cutting-edge effects picture since "The Matrix," it lacks that work's epic,
synthetic sweep. But if your taste runs to that flavor of eye candy, "Pitch
Black" will rock you. It's a tightly constructed genre picture, combining
the best paranoid thrills of the "Alien" series with the setting of "Mad Max"
and the anti-Utopian future of "Blade Runner."

This is apparently Vin Diesel's big week. In this film, playing Riddick, a
sinister, laconic convict with hidden depth, he looks like the first new
action star of the 2000s. Meanwhile, in the next chamber of the multiplex,
you can see him as a youthful stock-trading shark in the ensemble drama
"Boiler Room." (Previously, Diesel had a small role in "Saving Private Ryan"
and was the voice of "The Iron Giant.")

Riddick is a muscular badass, a multiple murderer who apparently shaves his
head with axle grease. "Human blood has a coppery taste," he tells Johns
(Cole Hauser), the bounty hunter entrusted with taking Riddick back to
prison. "If you cut it with peppermint schnapps it goes away." But the
wiseguy dialogue doesn't conceal a certain soulful intelligence, even
sadness, in Riddick. He's a real cool killer whose still waters run deep,
not just another snarky asshole in the Schwarzenegger mold. When a Muslim
cleric (Keith David) among the castaways accuses him of lacking faith,
Riddick avers, "I absolutely believe in God. And I absolutely hate the
fucker."

Johns, Riddick, the imam, spacecraft captain Caroline Fry (Radha Mitchell)
and a motley handful of other renegades are the only survivors of a
crash-landing on an unknown desert planet, where the combination of three
suns means that night never falls. The crash sequence itself, which opens
"Pitch Black," is an electrifying thrill ride of chaotic digital animation
and distorted photography, which lets you know right away that director
David Twohy, cinematographer David Eggby and their collaborators are
planning to kick out the jams. While struggling to find water and food on
this harsh, apparently uninhabited sphere -- rendered by Eggby (who was, in
fact, the cinematographer on "Mad Max") in harsh, surreal yellows and blues
-- the gang makes a number of unhappy discoveries.

There were humans, probably a team of geologists, living on the planet at
one time, but something bad happened to them exactly 22 years earlier. The
thing that happened was a total eclipse, leaving the planet in darkness and
summoning something -- actually, very many, very hungry somethings -- from
beneath the surface. The rest of "Pitch Black" follows the familiar pattern
of a desert-island or haunted-house movie, as our plucky band, trapped in
the darkness with their batteries and fuel supply rapidly fading, feud among
themselves as they're picked off one at a time.

I won't spoil the "Pitch Black" monsters for you except to say that you
never get a really good look at them, which is almost always a good idea.
There's a little Alien to them, a little pterodactyl, maybe a little bat.
Twohy's handling of the sense of unknowable menace, the interplay of a
little light and a lot of darkness, as the survivors huddle together against
the whispering, scratching hordes of Others, is truly masterful.

While Diesel's performance as the enigmatic Riddick is clearly the
star-making turn here, Twohy (who co-wrote the screenplay with brothers Jim
and Ken Wheat) has created a compelling little character drama in
which most people aren't what they seem. The tough and resourceful Caroline
doesn't really want the other castaways to know how she tried to save her
ship just before the crash; her uneasy alliance with Riddick may have
something to do with their shared sense of guilt. Johns, who at first seems
to be an upstanding lawman, may be less trustworthy or honorable than the
murderer he's transporting. The imam, played by David with quiet integrity,
must face the most painful test his faith can imagine. We get a bit of comic
relief from Paris (Lewis Fitz-Gerald), a fussy antiquities dealer anxious to
hold on to his rare wines and New Guinea tribal artifacts; every "Lost in
Space" must have its Dr. Smith and every "Gilligan's Island" its Professor.

That said, most genre fans will focus on the apparently bottomless bag of
sound-and-vision tricks employed by Twohy, Eggby, production designer Graham
Walker and effects supervisor Peter Chiang. Riddick, as it turns out, got
black-market implants shot into his corneas before escaping from an
underground maximum-security prison, so occasionally we benefit from his
infrared vision, revealing the besieging predators as explosive yellow-white
blobs against a crimson background. Then there's the black-and-white,
digital crittervision that sometimes shows us how the humans look from the
winged marauders' perspective. If you have a weak stomach, "Pitch Black"
might not be for you. I don't mean because there's a lot of gore (there
isn't) but because of Eggby's skittering, whirling, always-subjective camera
angles; "The Blair Witch Project" feels like Merchant-Ivory by comparison.

"When the dying starts," Riddick tells Johns, "this little psycho-fuck
family of ours is going to tear itself apart." He's both right and wrong, of
course. If "Pitch Black" is ultimately a formula picture in which the rogue
outsider must learn the value of sacrifice and togetherness, the formula is
dispatched with a nimble, respectful touch. With the "Alien" and "Hellraiser"
series long out of gas and with Wes Craven apparently retiring, the mid-budget
horror genre badly needs some new blood. With this bravura effort, Twohy
(whose previous film, an alien-invasion flick called "The Arrival," was
nothing special) looks like the new sheriff in town, with Diesel as his
enforcer. Long may they rule.