The specter of American gender extremism is making ripples across the Atlantic. 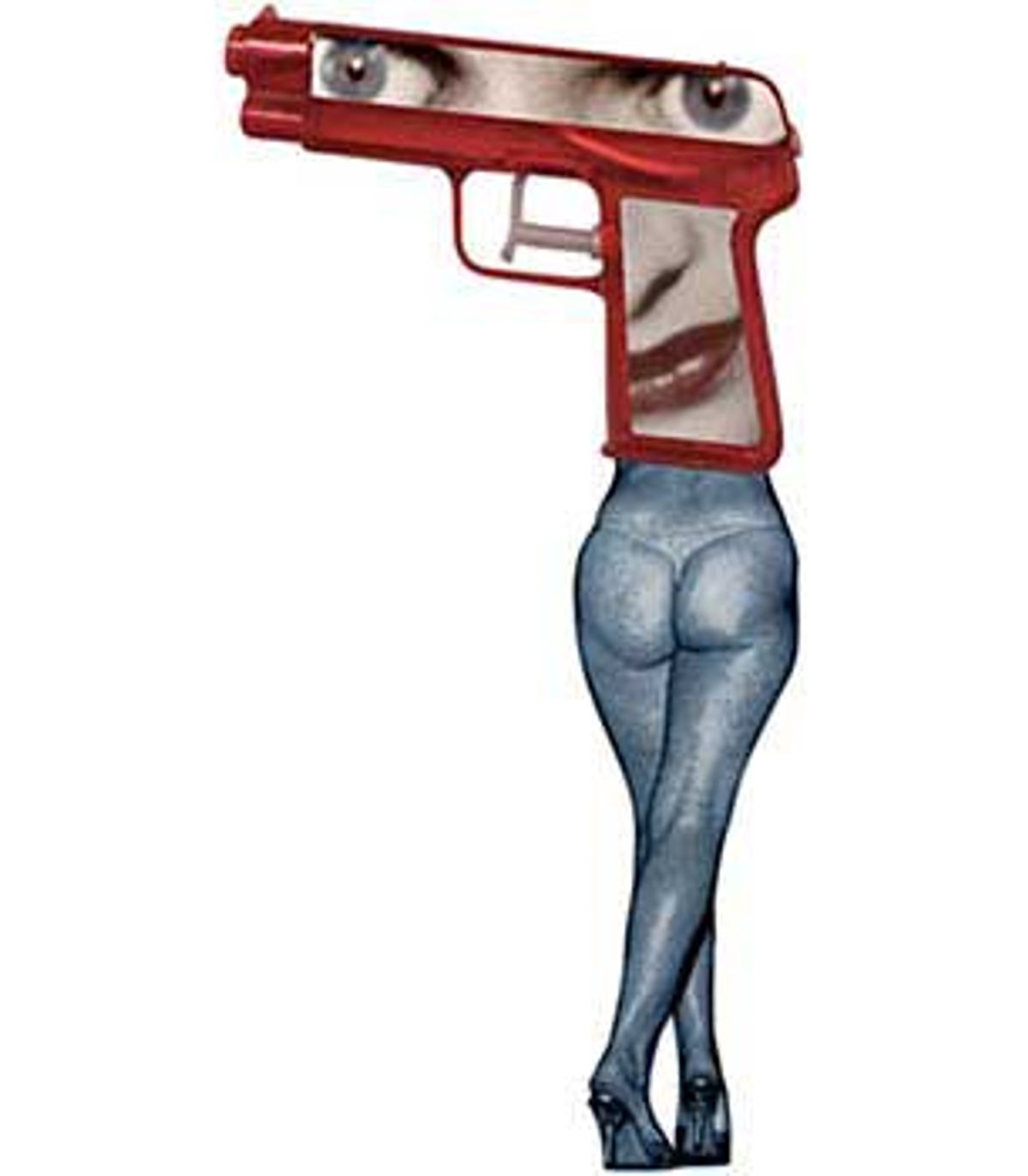 In England, the gender wars are often viewed as a peculiar form of "dementia Americana." There is a common, and not entirely groundless, belief among Europeans that Americans have a propensity to take even good ideas to absurd extremes: Convince the Yanks that working women should be protected from sexual extortion by the boss, and the next thing you know they're outlawing lascivious glances at the office.

And yet two days before Valentine's Day, here we were at a conference in London titled "Sex Wars," discussing such familiar problems as the politicization of the personal, the demonization of men and paranoia about sex and relationships.

The conference, held at the Institute of Contemporary Arts just a short walk from Buckingham Palace -- itself the site of some famous sex wars in recent memory -- was organized by a discussion/debate group called the Maverick Club and the libertarian-leaning, iconoclastic monthly LM.

A crowd of nearly 300 people, less predominantly female than gatherings at gender-related events stateside, came to hear academics, journalists and others tackle subjects ranging from "Regulating Passion" ("What impact does an increased awareness of issues such as sexual harassment, domestic violence and date rape have on the way we enter into relationships?") to "Sex and the Single Girl" ("Has the demise of long-term relationships led to greater emotional fulfillment, or will it result in an epidemic of lonely singletons, too cautious to make a commitment?").

The specter of American gender extremism, invoked as a cautionary tale, hovered at times over the proceedings -- particularly when University of Massachusetts (Amherst) professor Daphne Patai, author of the 1999 book
"Heterophobia: Sexual Harassment and the Future of Feminism," talked about the depredations of the "sexual harassment industry" in the United States. (Full disclosure: I was a speaker as well, unpaid but reimbursed for travel expenses.)

But that's not to say everything was quiet on the sex-wars front on British soil. One story freshly ripped from the headlines was a hefty award of damages -- 400,000 pounds (about $700,000) -- to a man who had sued a female
co-worker for libel after she falsely accused him of rape. Many feminists were dismayed, especially by the judge's decision to make the woman's name
public; one activist fumed that "the judge needs shooting."

On the first conference panel, "The War of the Sexes," University of Kent sociologist Frank Furedi cited the brouhaha as evidence of how polarized
discourse about sex and gender had grown -- on one side, men's movement activists (yes, they have them in England) gleefully rubbing their hands that
a woman had finally been punished for falsely accusing a man, and on the other, feminists basically conceding that she lied yet complaining that the punishment would deter real victims from coming forward. Furedi noted that
no one was looking at the specifics of the case or at the individuals involved. Such divisiveness, he added, had become typical of popular and even academic
discussions of gender: "Either feminism is accused of stoking up anti-man passions and of inventing problems that do not exist, or men are said to be waging a war against women and systematically using violent tactics like stalking, battering and rape to maintain their hegemony."

A good part of the "War of the Sexes" panel focused on an issue that has enough resonance in England to make Susan Faludi a happy woman: the plight of men. Curiously, the strongest plea for the newly beleaguered gender was offered by Sunday Times columnist Melanie Phillips, author of a controversial new book, "The Sex-Change Society: Feminised Britain and the Neutered Male." She painted a bleak picture indeed: Men are
demonized in feminist rhetoric, made increasingly redundant in family life, subjected to discrimination in divorce courts and virtually presumed to be violent and abusive toward women.

"Women have to stand up and say, 'What has
been done in our name is wrong,'" declared Phillips. "No one should reach emancipation on the backs of somebody else's enslavement." There was some
discussion about whether men as a group should themselves stand up to feminist excesses, and why they had not done so. "We're all vulnerable to the suggestion that we've been prejudiced or beastly to someone," ventured
Phillips, explaining that men are "very intimidated" by charges of being sexist.

A few men did speak up during the question and answer period, though one of them actually voiced his dismay at the idea of a men's movement, saying that he had already seen "angry men on television complaining about feminist bitches." (Now there's a cultural difference: We don't hear such complaints on TV.)

One panelist, writer Daniel Britten,
said that men, held in check by the fear of being politically incorrect, nevertheless need to articulate their side of gender issues. Male resentment against
feminism, he noted, is partly due to feeling "excluded from the public debate about gender" -- illustrated by the fact that only six of the 26 speakers at "Sex Wars" were men. He added, though, that it should be a
"controlled response," lest a nasty "cycle of retribution" be unleashed by male reaction to feminist rhetoric.

The main focus, however, was not men but governmental and therapeutic intervention in relationships, exemplified by the widening reach of sexual harassment policies and proposals that would subject
nonviolent spousal conflict to official scrutiny under the guise of combating domestic violence.

Jenny Bristow, a freelance writer in her 20s who focuses on issues affecting young women, stressed that it isn't always a matter of clear-cut injustices to men: "The man accused of harassment is rarely a totally nice guy. The real problem is that once you start regulating with things like looks, comments or jokes, you get into a gray area where it's very hard to tell who's right and who's wrong. I think the only possible answer is that these interactions should never be regulated." Sara Hinchcliffe, a professor at the University of Sussex, argued that harassment rules dealing with such ambiguities "encourage people to impute the worst possible interpretation to human behavior."

Furedi deplored the tendency to portray male-female relations as dangerous and in need of policing -- for instance, Valentine's Day warnings that a man's suave charm could be part of a batterer's power game -- but he didn't blame this entirely or even primarily on feminism. Rather, he argued that the demand for formal rules and restraints stems from society's lack of "moral and cultural equipment" to deal with change or with interpersonal relationships. This sounded rather like the argument advanced by many American social conservatives -- except that Furedi was calling not for a return to traditional morality but for a revival of the '60s ideal of creative and liberated relationships.

Indeed, I got the distinct impression that in England, criticism of "sexual correctness" is far more likely to come from the left than in the United States. Even Phillips, under fire for her defense of the traditional family, stubbornly identifies herself as a liberal and a
progressive.

During the question period in the second session, "Regulating Passion," a self-described abortion-rights campaigner angrily said that just as she opposed state intrusion into women's reproductive lives, she was appalled by proposed laws that would allow intervention to protect women from "psychological abuse" in intimate relationships. Another woman said that as a veteran of leftism and radical politics, she found it very disconcerting to find sexual harassment codes depicted as progressive: "What sort of empowerment is it to say, 'You are harassing me?' -- especially since you usually end up saying to the employer, 'You must take my word over somebody else's.'"

Not everyone joined the consensus. On the "Regulating Passion" panel, feminist psychologist and author Lynn Segal -- herself once a critic of authoritarian tendencies in feminism -- got quite vexed by what she saw as an
anti-feminist agenda and a "defense of straight men." Her ire seemed directed in particular at co-panelist Daphne Patai, who had assailed the expansion of sexual harassment policies as an effort to root out sexuality at
work and in school, stemming from the anti-male and anti-heterosexual bias of a small but inordinately influential group of feminists. All the hype about
men running scared and sexuality being under attack, an animated Segal asserted, was just a reaction to a new situation, one in which there was "more recognition both of women's right to sexual pleasure and of the need to defend women from sexual violence."

This corrective to the sexual libertarianism of "Sex Wars" may have been useful, but Segal's defense of feminism often seemed more vigorous than coherent. She was upset because a recent TV show about the clitoris used humorous graphics of "quivering walls" to illustrate the female orgasm, whereas a comparison program on the penis showed "rockets shooting off 50-foot fireworks," which somehow added up to cultural barriers to "asserting an active female sexuality."

In the afternoon, following a discussion about television that focused more on culture than on politics, writer Philippa Gregory reintroduced a political note on the "Sex and the Single Girl" panel. Books like "Bridget Jones' Diary," she warned, were part of a "backlash" warning women about the perils of the independent life, rather like the 18th century novels in which the heroine who ventured out the front door was doomed to rape and early death.

"But now the warning is not don't go out the front door," interjected Jenny Bristow, "it's don't let somebody into your life, because you could get hurt." While Bristow did not put much stock in the backlash theory, neither did she buy the bleak picture of the single girl's life. "We
have more freedom than ever, more choices, but instead of enjoying this situation it has been problematized with talk about miserable singletons and commitment-phobes," she said. "In fact, it's not nearly so bad or so
difficult." To my delight, Bristow also challenged the clichi of male fear of commitment, suggesting that the alleged commitment-phobe may not be fleeing marriage in general but simply a particular woman.

One of the older speakers, novelist Maggie Gee, cautioned that many women who had pursued the pleasures of singleness had ended up childless and hurting. Yet, in refreshing contrast to American neotraditionalists, who are forever portraying women as hapless maidens victimized by the sexual revolution, she emphasized that "we enjoyed our sexual freedom
and adventure -- not just the men, we enjoyed it too -- we just failed to make plans for having children." Gee suggested that women need a more strategic
approach to go with their freedom, which some audience members found unpleasantly calculating.

On the way back to the States, I reflected on what the real differences are between English- and American-style gender politics. In Britain, the percentage of the population actively involved in any kind of gender politics
is probably much smaller, but this is not to say that the politics are any less radical. It may even be that, as one female TV journalist suggested to me at dinner, the British tend to be much too complacent about political
correctness and gender warfare because they dismiss these problems as American afflictions.

I suddenly realized that there is one noticeable
difference: Even on the all-female panels at "Sex Wars," there was none of the "just between us girlfriends" tone that pervaded a panel on women and intimacy I recently attended in New York. Chalk one up for Anglophilia.