Skepticism and salvation in Cyprus

An unorthodox tour of the second and final tomb of Lazarus puts a strange twist into our correspondent's Larnaca layover. 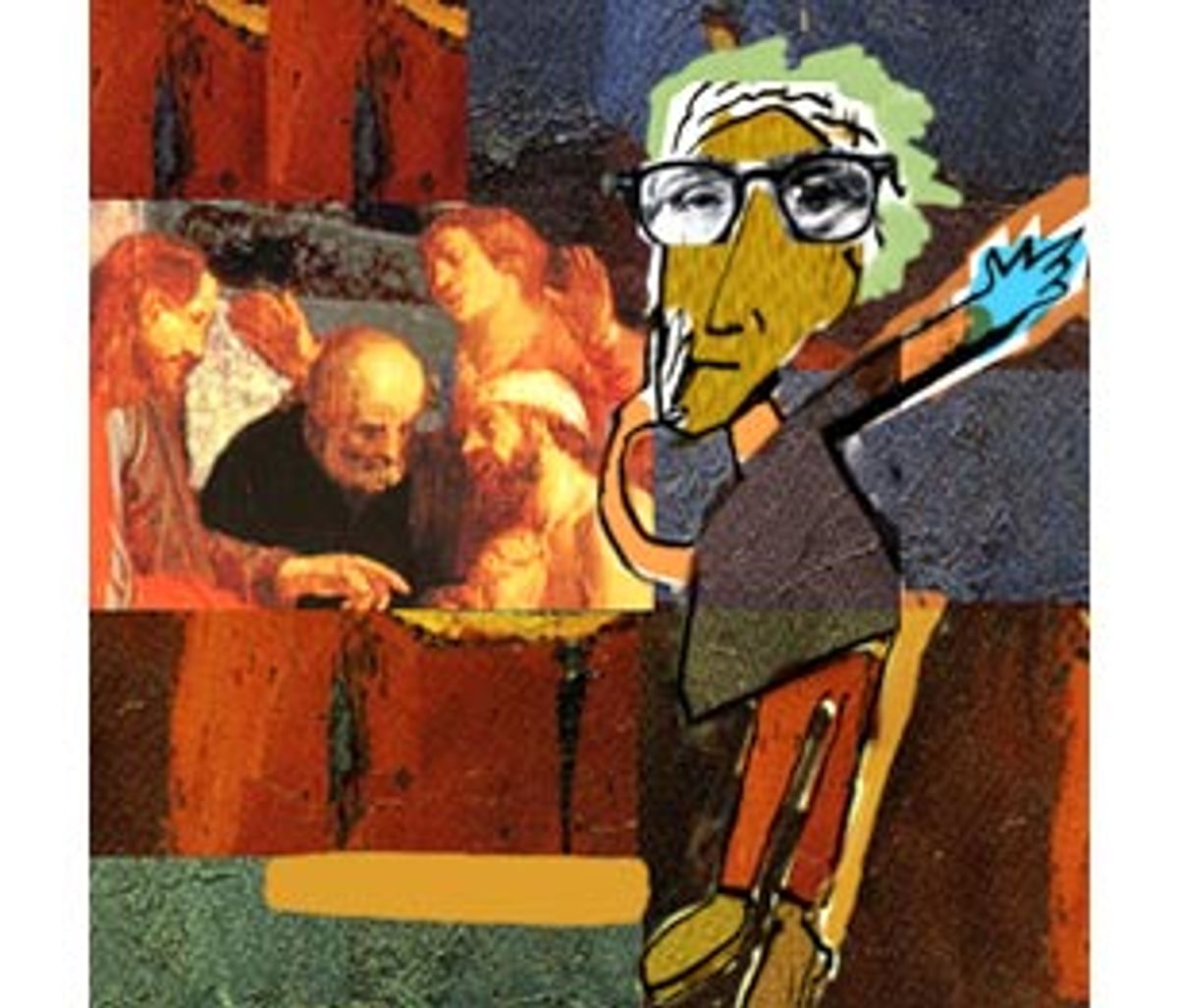 Perhaps I never would have met the Iranian had it not been for the influenza
epidemic raging across Europe at the time. Because of the flu,
Larnaca -- a holiday beach town on the southern coast of Cyprus -- was
nearly empty of tourists. I was walking along the deserted beachfront
promenade when a lone man in coveralls approached me.

I smiled at both the man's abrupt introduction and his unusual appearance.
He looked like he'd just come in from bow-hunting deer in Idaho: dark-green
coveralls, heavy boots, a bright orange stocking cap. He wore thick
glasses and looked to be about 40 years old.

"America!" the man exclaimed. "I have an American nickname: Harrison.
Like Harrison Ford. I made up this name because I like Harrison Ford, and I
love America. In my mind, I think that America must be like Paradise. Is
it wonderful to live there?"

"Well I wouldn't call it Paradise, but I like living there."

"I wish I could go to America, but I cannot get a visa. So last week I came
here to Cyprus instead."

The Iranian scoffed. "For me, there is no vacation. I come here to fix
satellites."

"Yes, that is my work. The police in Iran don't like satellites, so I have
to come to Cyprus. There are many satellites in Larnaca."

Since I was quite certain Cyprus didn't have a space program, I decided to
clarify. "What kind of satellites?"

"Satellites!" Harrison exclaimed. He pointed skyward and waved his hands
around. "In Iran, the police say they are bad for women, so I have no
work."

"How are satellites bad for women?"

"With a satellite, women can see too many things. They can see Dallas."

"And many other electronics. But Iran is not a good place for me to live or
work. I hope Cyprus is better. Tell me, did you come to Larnaca for
living?"

"A tourist! You come for the beach, or to see Lazarus?"

"Lazarus. He was friends with Jesus. His tomb is here. Don't you read the
Bible?"

"Of course, but I'm pretty sure his tomb should be in Israel. And it should
be empty, since the story is that Jesus raised him from the dead."

"Yes, but after Jesus gave him life, Lazarus decided to come to Cyprus. If
you wish, I can show you where is his tomb."

As I followed the stocking-capped Iranian away from the beachfront, I
couldn't help chuckling at the thought of Lazarus choosing to come to
Cyprus (of all places) after his resurrection. I kept getting this mental
image of a post-miracle press event at the open tomb in Bethany, with
reporters shoving in to ask questions. "Lazarus," I imagined them saying,
"Jesus just raised you from the dead after four days in the tomb -- what'll
you do now?" And instead of Disneyland, Lazarus tells them he's going to
Larnaca.

"Why do you smile?" Harrison asked me as we went down the winding back streets of Larnaca in search of the tomb.

"I'm just wondering why Lazarus came to Cyprus," I said. "I'm wondering
what he did when he got here."

The Iranian shrugged. "He died again, I think."

Lazarus or no Lazarus, I had never planned on going to the Mediterranean
island of Cyprus in the first place. Originally, my plan had been to find a
direct flight from Rome to Cairo. I'd soon discovered, however, that Cyprus
Air offered passage to Cairo at less than half the cost of other airlines.
The only catch was a 24-hour layover in Larnaca. Always a sucker for cheap
airfare, I went for it.

The drawback to this was that I arrived in Cyprus without any idea of what I
could see or do there. The tourist authority at the Larnaca airport gave
me a stack of brochures, but it seemed self-defeating to spend much time
studying them when I had only a day in the country. When I'd skimmed over
the parts about how Larnaca featured the St. Lazarus Church, it never occurred
to me that Lazarus himself might be there. The Iranian who called himself
Harrison set me straight.

"Do you believe in Lazarus?" he asked as we made our way to the tomb.

"Well, I don't really believe he was raised from the dead after four days,"
I said.

"But his bones are here in Larnaca! Don't you believe in the Christian
God?"

"I believe in God, but I also believe in a healthy dose of skepticism."

"Skepticism is like doubt. A skeptic is someone who doesn't believe very
easily. That's me."

"Do you believe in artificial blood?"

This question threw me a bit. "Artificial blood? Like in the movies?"

"No, in real life. The blood that people use."

"I don't think I know about that."

"It comes from America, and doctors use it. I read this in a magazine, and
it sounded crazy. Still, I am not a skeptic. I think it is real. I want
to see it and know what color it is. I want to know how it is made. Do you
know where I might see some?"

"Actually, this is the first I've heard of anything like artificial blood."

"You are a skeptic."

I laughed. "Or maybe just ignorant."

Harrison reached out and took me lightly by the arm. "Do you know how to
get a visa to America?" he said in a quiet voice.

"Not really," I said. "I'm from America, so of course I don't need a visa
to go there. Why do you want one -- you want to see artificial blood that badly?"

"Iran is a bad place," he said, ignoring my clumsy joke. "There was some
hope before, but things are getting bad. The elections will make things
worse. I don't want to go back; I want to leave."

"What about Cyprus? Aren't you going to stay here?"

"My visa is only for three months. But while I am here, I want to get an
American visa. Can't you help me?"

"I'd like to, but I don't know anything about the visa process. Especially
for Iranians."

"Can you write down for me your name and address in America? Maybe it would
help if I had an American friend."

"I don't think having an address will make a difference. Especially the
address of someone you just met in the street."

Harrison looked a bit hurt by this comment. "But I think we are already
friends," he insisted.

St. Lazarus Church is a sturdy stone structure in a clean courtyard not far
from the old Larnaca Fort. Harrison waited outside as I entered to discover
a narrow maze of wooden pews, vaulted ceilings and curving stone-block
columns. Ornate chandeliers hung from the stone arches, and an intricate
gilded iconostation dominated the front of the church. Byzantine saints
with golden halos peeked out from every wall and corner. A painted wooden
altar in the middle of the church contained a silver crucifix and large
glass disc fastened down with a ruby-studded rim. Beneath the glass was the
yellowed crown of a human skull.

According to church tradition, Lazarus went to Cyprus in about A.D. 33 to
escape persecution at the hands of the Jews in Bethany. He settled in
Larnaca (then called Kition) and was consecrated as the first bishop of
Kition by the Apostles Paul and Barnabas. During his time in Cyprus,
Lazarus never smiled save on one occasion, when he saw someone stealing a
pot and said, "The clay steals the clay." His melancholy demeanor was said
to be a result of the four days his soul spent in Hades before Jesus raised
him from the dead. He died for the second and final time in A.D. 63, and
the present stone church was built on the site of his tomb in the late ninth
century.

Harrison was waiting for me outside when I'd finished peering around inside
the old church. "Was it a good place?" he said. "Are you glad I showed it
to you?"

"Do you believe in Lazarus now?"

"No, I'm afraid I'm still a skeptic when it comes to Lazarus."

"I am not a skeptic. I believe in Lazarus."

"Are you a Christian?"

"Do Muslims believe in the miracle of Lazarus?"

"The Koran does not speak of Lazarus. But the Koran does say that Jesus
could do miracles. I think it is bad to be a skeptic. I think you should
believe."

"A skeptic believes in many things, but he also doubts. All I'm saying is
that I doubt the miracle of Lazarus."

"But how can you doubt miracles if you believe in God?"

"God is God -- I just don't believe he deals much in miracles. I don't much
believe in believers, either. That's how skepticism works."

Harrison nodded solemnly. "There are too many believers in Iran. I think I
am a skeptic sometimes, too." He paused for a moment, then went on. "Do
you think I am a good man?"

"Then can you please give me your address for an American visa?"

"I don't think my address will make a difference on your visa."

For some reason, I didn't want to encourage what seemed like a doomed
enterprise. "It will take a lot more than my address to get you to
America."

I gave Harrison a hesitant stare, still not comfortable at being the object
of such blind hope. "OK," I said finally. "Give me some paper."

Harrison unzipped his coveralls and took out a small, dogeared notebook.
"If anybody asks, you must tell them I am your friend."

"I think I can do that," I said. I took the notebook and wrote down my
American address -- touched by Harrison's desperate sense of optimism, but
still skeptical at his odds for a new life.

When I'd finished, Harrison thanked me profusely and made vague plans to meet me that evening. After he'd gone, I stuck around the courtyard to stroll
through the Byzantine museum and examine the marble graves in the adjacent Protestant merchant cemetery.