Persian pop vs. the revolution

Iran's strict laws have created two cultures: The official and the real. 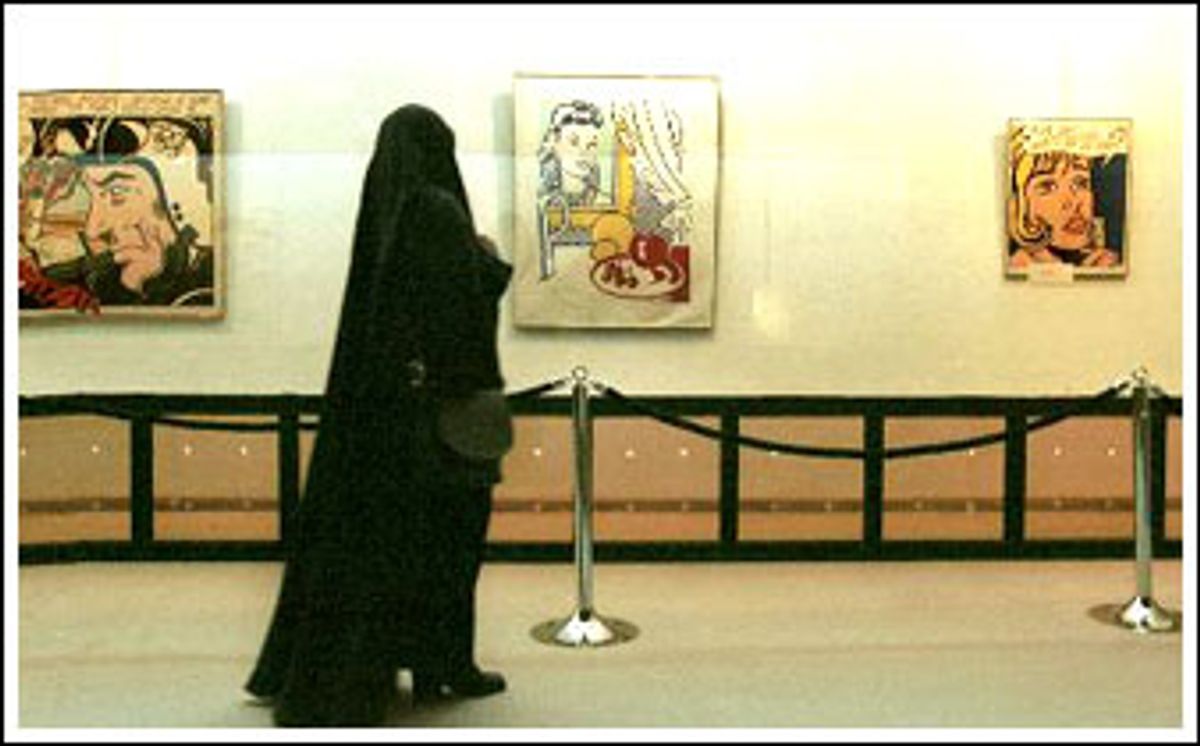 "You have to listen to this," says Bahram Bahraini,
a cutting-edge record producer in Tehran. He pops
a recording in the CD player. A blast of
synthesized rock music sweeps out of the huge
speakers and electrifies the room. "Isn't this
great? It's great!" says Bahraini as he snaps his
fingers and begins to jive on the Persian rug,
giggling. "This is what the government didn't like.
They made us change this part."

"They" are the Council of Music, a unique creation
of the 21-year-old Islamic Revolution, which
requires written approval before any bar of music
is played in public anywhere in Iran. Along with
the Council of Poetry, which vets every word of
every lyric written, it is housed within the
Ministry of Islamic Guidance and Culture. That
department is charged with keeping Iran a pure
Islamic country, by enforcing a mass of rules and
regulations: which books people can read, what
music they can hear, which foreigners they can talk
to.

Iran, to be sure, is changing dramatically.
Reformists won a landslide victory in Friday's
parliamentary elections, thanks largely to the
millions of Iranians who are far too young to
remember the 1979 Islamic revolution.

By Wednesday, with two-thirds of the votes counted,
the reformists had won more than 70 percent of the
votes, capturing at least 141 of the 195 seats
decided so far. Reports show reformers are leading
for the 30 outstanding Tehran seats. The remaining
65 seats will be decided in run-offs for the
290-member parliament, or Majlis.

The immensely popular liberal President Muhammad
Khatami, who swept into power nearly three years
ago, promised to liberalize Iran and ease control
by its hard-core Muslim clerics. The landslide
victory this week was won by those who backed
Khatami's reforms. Even veteran conservatives were
kicked out -- in the traditionally conservative
city of Mashhad not a single incumbent kept his
seat.

About 60 percent of Iran is younger than 25. And
while most have a deep attachment to Islam, the
stunning vote suggests that they have had enough
of the intense scrutiny and control over their
lives.

In the days since the election, the new
representatives have begun sketching out in
interviews their vision for a new Iran. Among their
priorities in the new parliament, they say, is to
give youth some freedom to live life the way they
want.

For years, young Iranians have chipped away at the
prying forces of the government, so that today,
there are two pop cultures in the country:
official and real.

Officially, Western movies are forbidden. But
countless Iranians use a bootleg video-rental
service, a huge network. Someone appears at the
front door each week with a suitcase containing
tapes of the latest Hollywood releases. Iranians
in the United States shoot them from their theater
seats using small hand-held cameras, then ship the
tapes to Tehran, where they are copied in bulk.
The sound is muffled and the picture jerks wildly
in parts, according to several people I
interviewed.

But being current is much more important than
quality in a country where the government has spent
years trying to seal people off from the
corrupting West. "I bet we saw 'Titanic' before
you did," one Tehran student boasted to me. "We see
movies the week they come out."

Officially, Western rock music is banned, and
everyone arriving in Iran is required to present
CDs and tapes for inspection. In reality, countless
CDs slip through, by mail or by hand, and are
instantly copied.

At the hugely popular Iranian concerts held in the
United States and Dubai every March to celebrate
the Persian new year, performances by forbidden
imigri singers are also taped. Within three days,
the tapes are blasting from stereos and
televisions in living rooms around Tehran,
according to those I interviewed.

But the youth who helped oust scores of
conservatives this week ought to hear Bahraini's
tale of trying to produce a new rock album. It is a
tale that demonstrates the religious bureaucracy
governing culture is still a force to be reckoned
with.

More than four months ago, Bahraini made a master
recording of his latest find: a group of friends
who had been jamming together in their Tehran home,
with a guitar, synthesizer, saxophone and drum set.
They had managed to create some fine rock songs,
shot through with traditional Persian rhythms and
Farsi-language harmonies. It was strikingly
different from what was being played in Tehran.

Bahraini snapped up their tape for 8 million Rials
-- about $1,000. It was great money for an obscure
band that had played only a couple of concerts in
the city's government cultural centers. Bahraini,
whose Tannin Sote Records produces "new wave and
new age" music, has made a name over the past few
years for spotting big talent early on.

Then began the struggle. Following the law,
Bahraini typed out all the lyrics and made a
cassette tape of their music. He dropped the
material off at the offices of the Council of
Music and the Council of Poetry, and waited weeks
for a response. The music council finally sent
word: The offending instrument was the saxophone,
whose sensual riffs sounded unsettlingly
provocative. "They said it was the Western style
of playing," said Bahraini, who spoke through an
interpreter.

Bahraini returned to the group, which re-recorded
some parts. He took the tape back to the council.
The saxophone had been tamed. But that only drew
fresh attention to the other instruments. "Then
they wanted us to change the electric guitar,"
Bahraini said.

The Council of Poetry was no easier. Bahraini
remembers the moment he first played the group's
rock songs to them. "The members of the council
were shocked," he says. "The style was shocking.
It was totally different to what was on the
market."

Bahraini says he greatly respects the music council
members, whom he describes as a group of skilled
players with a sophisticated grasp of their field.
The twin poetry and music councils are headed by
the creator of Iran's national anthem.

But music is tricky to categorize. So, the council
considers two main questions when trying to decide
whether a song will undermine the Islamic
Republic, says a council official, sitting in his
office. "First, any music that's related to the
style of the previous regime, when the Shah was in
power -- the style before the revolution -- is
forbidden," he says. That would rule out much of
the music played by Iranians living in the United
States. But the second factor is far more
important, he says: "If the music makes you want
to jump up and dance, it is not acceptable. Even if
they are not singing words, if the meaning of the
music itself is to make you jump and dance, it
cannot be approved."

At 28, Shahkar Binesh Bajooh finds it hard to
resist jumping and dancing. He is the drummer in
the band Bahraini is trying to produce. Performing
publicly, he says, has become a tense experience.
"We cannot move our bodies to the music. And this
music is hard to stand still with." In addition,
he says he dare not wear anything other than a suit
when he is on stage. "I just don't want to risk
trouble." When I ask whether people in the
audience can dance or bop around in their seats, he
looks at me, confused, and then busts out
laughing. "No, of course not!"

Indeed, just finding a performance venue can be
daunting. First bands have to play a tape of their
planned concert for the managers of each venue they
apply to perform in.

"If one center agrees to let you perform, then the
center has to send a letter to the Ministry of
Islamic Guidance letting them know," says Binesh
Bajooh, a reed-thin man in dungarees. Next, the
musicians take a cassette to the ministry "and
submit a photograph of every band member. We also
have to submit all the words to the Council of
Poetry. Then we wait for their permission."

The government's decision can take weeks -- or
days. "It's totally unpredictable," says Binesh
Bajooh. Approval sometimes comes a few days before
the performance date, making it impossible to
advertise the concert. Two years ago, the staff at
one venue canceled Binesh Bajooh's three-night gig
after one performance, fearing trouble from
conservatives. "We had already sold tickets for
the other nights, and we'd rented a piano," he
says. "It was a big headache."

But life in Iran is changing. And young artists
like Binesh Bajooh are beginning to sense the
shift. No longer do musicians worry about some of
the audience getting arrested by police on their
way home for holding hands in the street or for
wearing their hair too long. "You don't see these
things so much any more," he says. No longer does
it take several weeks to get approval for
concerts. The process is gently accelerating in
some parts of the system, he says. "Everything has
become much better since Khatami."

Ahmad Bourghani agrees. He is one of the key
members of the reformist Iran Islamic
Participation Front, which led last week's winning
coalition. The party is headed by the president's
younger brother, Muhammad Reza Khatami. "Before,"
Bourghani said, "we were insisting on getting
Islamic approval for everything. But now, it's
more based on thinking about whether or not it is
against Islam."

Speaking in the makeshift campaign quarters set up
by the party in a basement restaurant, Bourghani
said the new parliament would push for a hands-off
approach to youth culture. Jobs and inflation are
more important issues for many voters, but freedom
is not far behind, he says. "The most important of
all the reforms are those for the youth," he said.
"It is the youth who made these elections."

That does not mean the Islamic revolution is over.
Far from it. Like every winning candidate,
Bourghani says they dare not tread on voters'
Islamic sensitivities. "Any government has to
consider those beliefs or it will collapse," he
says. And so, women will probably continue to wear
head scarves, and open touching between men and
women will not be welcomed.

The new parliament still faces possible roadblocks.
The powerful Guardian Council, a 12-member
conservative body appointed by the Iran's clerical
leader, Ayatollah Ali Khamenei, has the power to
veto its reforms. And there is always a chance
that conservatives could take on the fight
themselves, if the Ayatollah's representatives do
not.

But if the new parliament gets its way, unmarried
couples might no longer be stopped at roadside
checkpoints and arrested, as they have been for
years. And rock musicians might be free to play
where they like.

Bahraini is still waiting for approval to bring
Binesh Bajooh's band to the market. "I'm waiting
for the next parliament. This is going to make a
big difference."