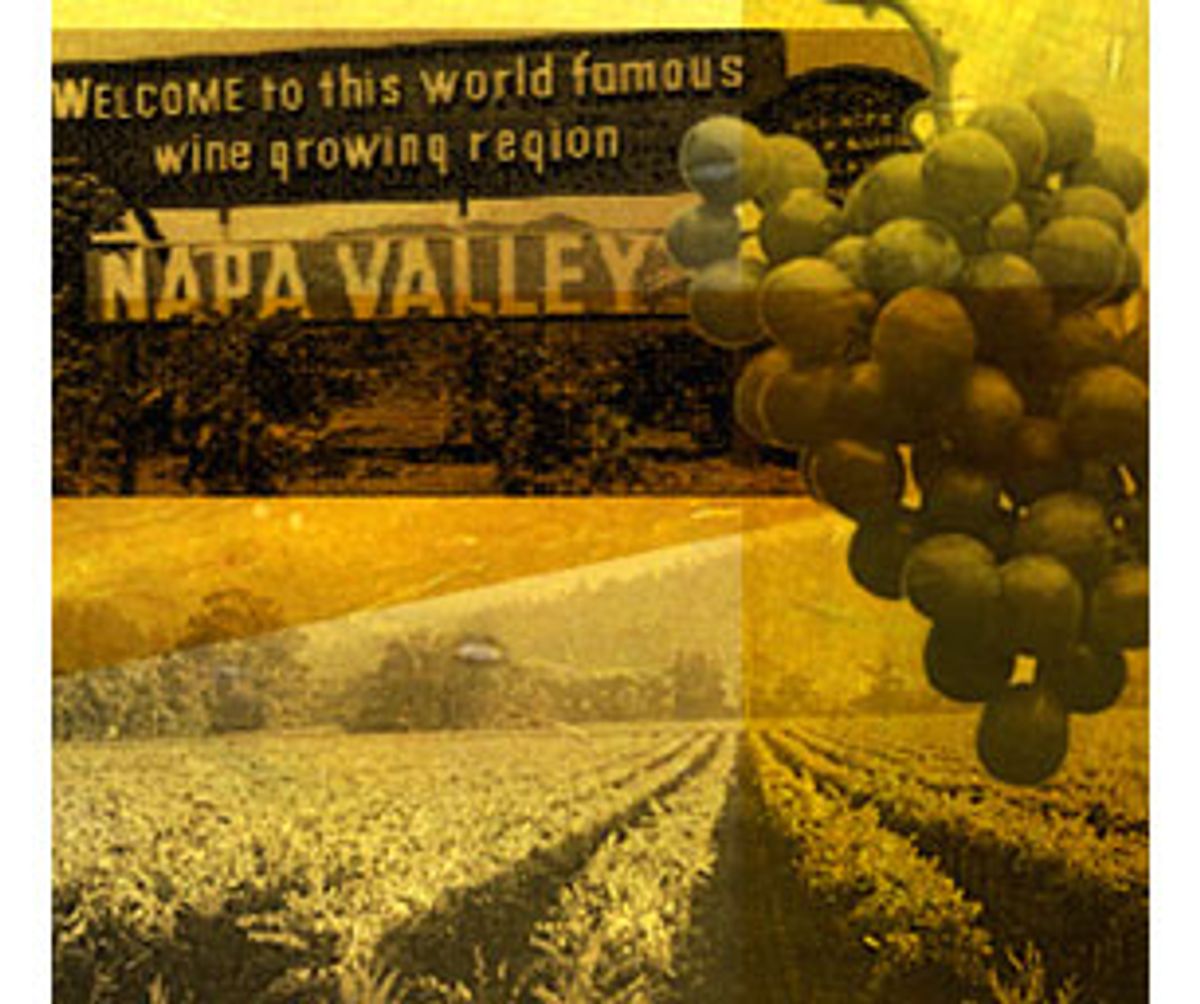 For decades people have been saying that the United States doesn't have its own cuisine, that all our gastronomic traditions were brought in from other cultures. But in fact, there is no country with a significant culinary tradition that hasn't taken major elements from other places. It's just that they borrowed them so long ago and used them so often, by now they think those things belong to them. Just like my son Stephen and my winter gloves.

And yet there are times in the history of a country's eating and drinking when the level of culinary skill and creativity takes its borrowed base and produces something so different that it is clearly indigenous to the nation. That is exactly what is happening right now in California's Napa Valley, where it will almost certainly continue happening well into the 21st century.

Show us the money

There are a number of things that produce top quality restaurant cooking in an area, cooking that can evolve into a distinct culinary tradition. First is money. If people will not pay for top ingredients and talented chefs, not much is going to happen.

The second is a local agricultural tradition. And that can be for any element -- cheese, wine, beef, olive oil -- but the more top-quality products that come out of the area, the better the chances for great cooking. In France, Burgundy and the area around Bordeaux are two examples. In Italy, the best districts of this kind form a "T" that runs from Pisa in the west to Venice in the east and down into Tuscany.

New York has some of the best restaurants in the world, but there is very little gastronomic tradition in New York restaurants beyond steak houses, delicatessens and something based on the food of southern Italy. The only thing New York grows is money, and it's used to bring in great ingredients and great chefs. But the chefs are primarily interested in their own style rather than something that reflects the city.

Napa Valley, on the other hand, appears to be developing a distinct cuisine that may well become a truly American style. The area has attracted people of considerable wealth, and for the past 150 years it has been producing cattle, stone fruit, cheese, olive oil and recently some of the best wines in the world.

From Mass to meals

The first winemakers in California were Catholic missionaries who brought vines from Spain so they could make wine for their religious ceremonies. Today there are only nine Catholic churches in Napa Valley, but more than 240 wineries. It has become the most densely concentrated wine-producing region in the world, with winery after winery set next to each other along a strip of road that runs down the center of the valley for 30 miles.

For the first hundred years, Napa's wine was generally considered better for Mass than meals, but that period came to an official end in 1976. A group of California winemakers held a comparative tasting of California reds and whites against French cabernets and chardonnays. The tasting was held in France and the judges were French winemakers and French wine journalists. To the astonishment of many, the Napa Valley wines beat the French in both categories -- and the world's perception of California wine was totally altered.

Sunday's New York Times Magazine contained an article about Salon in which the author described the search for liberation as the "eternal California soundtrack." I am unaware of the gastronomic sophistication of the woman who wrote that piece, but I'd like her to know that California's search for liberation is revolutionizing the world of food and wine -- and if she has any interest in eating well, she will soon be among the beneficiaries of that soundtrack.

When something has been produced in the same place for hundreds of years, it gets locked into a tradition that may no longer be valid. And in many cases there are political and economic forces that work against change even if that change would be in the best interest of the product and the consumer. Throughout Europe there are old rules about distilling spirits, making wine and producing foods that hold back development. In Napa, those rules don't exist.

In France you can make champagne from only three specific grape varieties. In Napa you can make champagne or sparkling wine using the champagne method, and if you want to add a fourth grape because everyone agrees it makes a better drink, you can. The same is true for cheese and olive oil and mustard and brandy and many other foods and wines that are coming out of Northern California. Mumm Napa Valley and Schramsberg are making excellent sparkling wines that could never be produced in France.

From wine to cheese

In 1920, Prohibition put dozens of California winemakers out of work. Some of them realized that their facilities could be used to ferment artisan cheeses. Today they are producing mozzarella, mascarpone, fromage blanc, ricotta and dozens of other cheeses that are excellent and free of the political rules that control production in Europe.

David Viviani of the Sonoma Cheese Factory exemplifies this transition. The grandson of a winemaker who was forced out of wine and into cheese in 1931, Viviani today makes small batches of teleme, an outstanding cheese that is similar to brie. Just down the street from Viviani is the Vella Cheese Company, which is one of two companies producing dry jack, a cheese that was developed during World War II when the Italian community in San Francisco was unable to obtain romano.

Or consider the case of the RMS Alambic Distillery in Napa. This distillery is owned by Remy-Cointreau in France, so its production is called brandy rather than cognac. But it is not restricted by the production laws of Cognac -- and as a result it has developed a product that does a better job of capturing the essence of the fruit, especially in its delicious Pear De Pear.

If we are going to have a respectable national cuisine, if the quality of the food and wine produced in the United States is going to evolve and improve, it is not going to happen at the giant corporations that dominate our present food supply. It is going to come from small independent producers searching for liberation and the freedom to improve and create -- as is happening right now in Napa Valley.