One way or another, men still expect to pay for sex -- and women pay for it, too, by keeping their financial goals low. 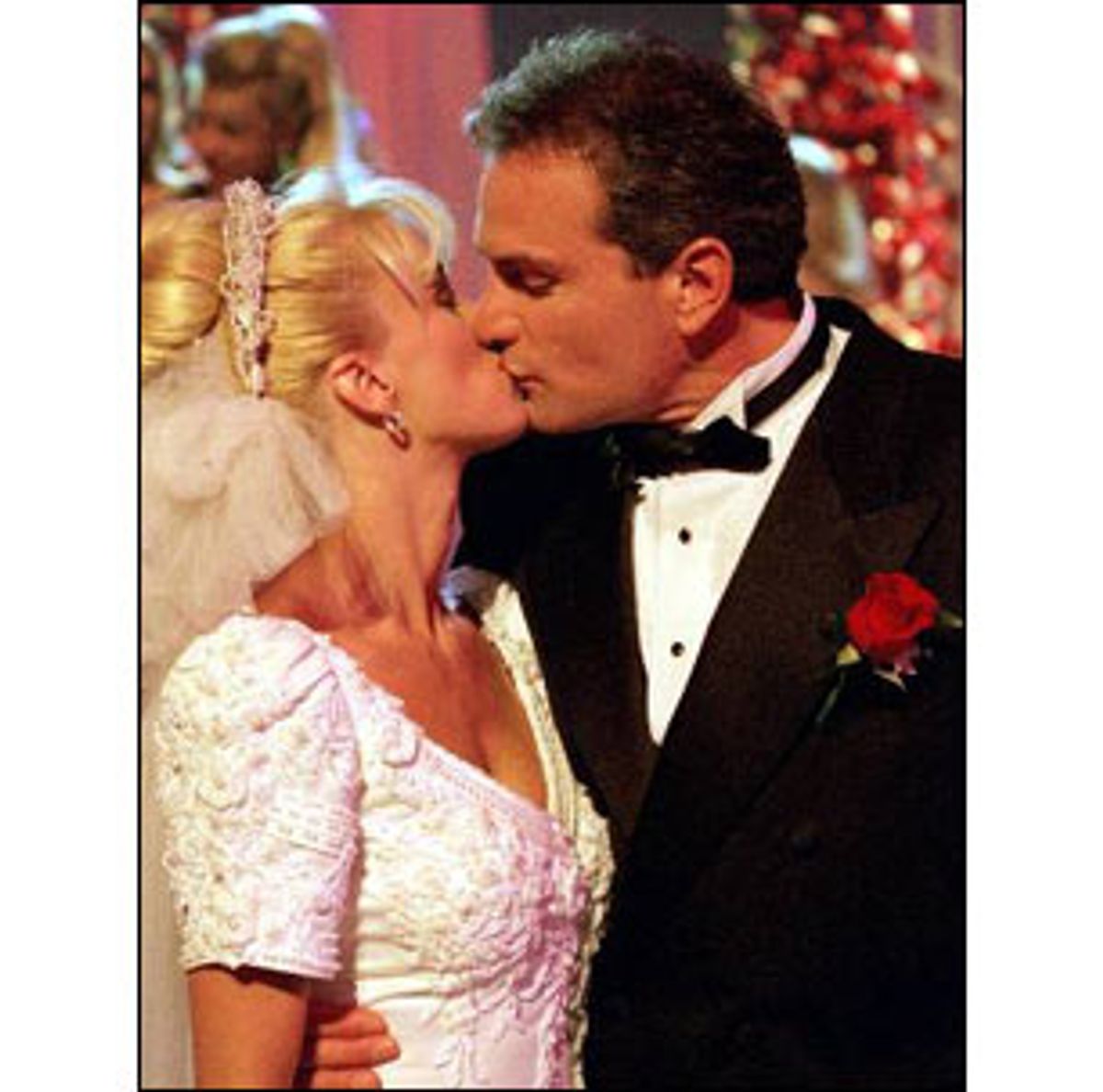 When I first heard about "Who Wants to Marry a Multi-Millionaire?" I remembered an incident from my childhood. It might have been the first time I became aware that sex was sometimes exchanged for money. My parents were gossiping, mainly over my head, and a scrap drifted down in my father's voice: "Why buy a cow, when milk is so cheap?" I asked what that meant, and my parents laughed. "Your father is talking about what happens when men and women live together without being married," my mom explained, in a lower voice. I didn't quite understand, but I felt the offense to my gender, and seethed with anger at my father for a few minutes.

After "Who Wants to Marry a Multi-Millionaire?" I was also offended for my gender. But after years of life experience, I was equally offended by its members. I knew the evil patriarchy hadn't forced the female contestants to enter this humiliating contest, or forced millions of women to watch. (The show actually got higher ratings among women than men.) If women were willing to sell themselves on national television, and other women were entertained by it, we hadn't come very far from the gender primitivism of my childhood, when both my parents took it for granted that sex was a good that men would, or should, pay for, and one that women could either "give away" or, well, not exactly sell, but obtain full value for bestowing.

After 40 years of feminism, many women still expect men to show their intentions, and devotion, by paying for dates and presents, and still evaluate them as future providers for a family. Men still complain of "wasting money" taking women out to dinner who don't want to have sex with them. They still mutter, "When push comes to shove, we pay all the time, whether it's prostitution or dating." Girls still grow up thinking of work as an option, while boys know it as a necessity.

But what if, rather than being hapless victims of the earnings gap, women allow it to continue, in part in order to choose their bed partners based on their incomes? What if (most) women enjoy earning less than men, because we have eroticized being on the short end of the stick? What if women, like men, effectively pay for sex -- with lower earnings?

My theory is that men have by and large eroticized freedom, while women have eroticized its absence. It's not that lower female earnings lead women to evaluate men based on their earning power -- it's that women want to maintain male financial dominance, so they make sure they earn less then men. And it's not that men are willing to support women (and their children) because they are committed to them -- it's because men believe they are buying the freedom to leave that they will (for a while at least) foot the bills. This applies to prostitution, where men pay for the freedom of closing the door on the selves they show, and to family life, where all too many men are able to walk away from supporting their children.

We rarely examine the values implied by the kinds of remarks we let slip constantly -- "She married badly," "He's a meal ticket," "She's too high-maintenance." Very few women would react well if a man asked their price, but many will casually boast of their boyfriend's expensive presents or recent promotion, or imply that a lover's income offsets other less stellar qualities. Not many men are proud of going to prostitutes, but even those who have never bought sex are apt to mutter that one way or another, men still pay for it.

Some people will howl in outrage at these ideas. Some will say it's harmful to the feminist cause to air these issues. I raise them here with the hope that discussion leads to more open lives, and better ones, with choices being made with open eyes. Some women may consciously choose a less responsible, less stressful or less remunerative job -- and that's fine, as long as it is a choice, not the result of sexism or its internalized equivalents. But just as we have learned to look at cultural factors when equal opportunity doesn't result in equal results racially, so we should inquire why so few women opt for the top of their professions, and why so many of the best and brightest women sideline themselves in their 20s, long before the tradeoff between childbearing and work becomes acute.

Instead of endlessly rehashing the staple women's-magazine issues, we should be exploring why women set their work and money goals relatively low, why women still represent only 13 percent of corporate officers of Fortune 500 companies, why so few of the dot-coms are founded by women, why of a recent list of 167 newly minted Goldman Sachs partners not even 15 percent are female. I do not think institutionalized sexism is a major part of the answer.

The tricky part of the sex-for-money trade is that there's a slippery slope. On one end is a man sending flowers to a woman after a first date, and on the other is the prostitute and her client. In a typical dating scenario, it isn't sex for money, exactly, but it may be sex because of money -- sex because a man's behavior gives signals that he has money and is willing to spend it. It's sexy, we women often think, when a man insists on taking us out to dinner or sends flowers, when he gives jewelry, when he promises a big diamond if things work out. But we also feel it's sexy when he earns more, when he has more heft and impact in the world. "More" is always relative, and since we can't be sure of having a relationship with a tycoon -- indeed, most women can be sure they won't -- women increase their chances of having a relationship with a man who is more successful by being fairly unsuccessful themselves.

You choose one of those fields that are respectable and interesting and offer an absurdly low ratio of income to effort, like public-school teaching or social work; or you have a series of dead-end and nonlucrative jobs rather than a career; or you do embark on a career, say in law or banking or advertising, but you take it less seriously, and ensure that you will never make partner or the equivalent. You make it clear that your career will not come first in your life. You can even make it clear that you are going to need to be taken care of. And surprisingly enough, men respond protectively.

I say "surprisingly" because hardly any woman wants to marry a man who says he will have to be supported. And in our cash-conscious society, we have few qualms about lacking a safety net for poor children, the ill or the disabled. Yet many a man who is not rich and doesn't expect to be rich will take on the financial responsibility for a young, able-bodied, well-educated woman who is not yet, and may not ever be, the mother of his children. Of course, there are limits. Men say, "She's too high-maintenance" about a woman they feel will bankrupt them. Women who overtly demand financial tribute are a turnoff to most men. But men almost never say (as women do), "What a great person -- but we can't get married because she's a nursery school teacher and hasn't got a dime." Women who need to be supported, with humble expectations for themselves, are a turn-on.

In middle- to upper-class life, it's almost a rule: The lower paid the occupation, the more obvious it is that the woman in it expects to attract a man to support her. Publishing? Auction houses? Private-school teaching? Classic post-deb, waiting-to-be-wed jobs. (Office receptionist, restaurant host, public-school teaching used to be the lower- to middle-class equivalents, except that now almost all married women in these economic groups have to work.) It's not that women need to get married because they hold these jobs -- in many cases, they hold these jobs because they want to get married. They're signals: "Rescue me" is the message.

Look at the equally controversial black-white earnings gap. While substantial numbers of blacks have moved into the middle class, the statistics also reflect the "underclass" who have not. In many inner-city neighborhoods, children emulate gangster culture and profess scorn for those who succeed in school. They're behaving in a self-defeating manner, dooming themselves to poverty, but it's understandable. They not only have few role models of conventional success, but they have little chance of achieving it. So a new culture of low expectations grows, with its own aesthetic, set up in opposition to the mainstream or elite.

Aren't there analogies to the case of women? We fail to see them because our eyes have not been nearly as opened to the effects of patriarchy as they have been to the effects of racism. When adult women spend substantial amounts of leisure time shopping for clothes they neither need nor can afford, or undergoing time-consuming "beauty" treatments, both men and women tend to read that as appropriate behavior. In both cases, women and African-American inner-city dwellers, there are what biologists call "feedback effects": The defeatist attitude leads to certain perceptions by the power structure of the group in question, and these perceptions are internalized, increasing the defeatist attitude. Multiply that by 5,000 years of patriarchal society, and you have some deeply ingrained behaviors. So deep, they tend to be called natural, by both sexes.

Nietzsche called this process of scorning what you can't have ressentiment. It's a status order internalized in the form of rules, like "Don't do your homework -- that's not cool," or "Majoring in computer engineering will scare attractive men away," or the perennial "If you work out too much, you'll bulk up." Women's eroticization of traditional power relationships makes evaluating a boyfriend for his earning power seem acceptable, rather than mercenary, to most men and women. And it's one small step from assessing a man's spending power to assessing your own salability. How far is that from selling yourself on national television?