The 14-year-old Karmapa faces Chinese vengeance, accusations of espionage and the political intrigues of Tibetan Buddhism. 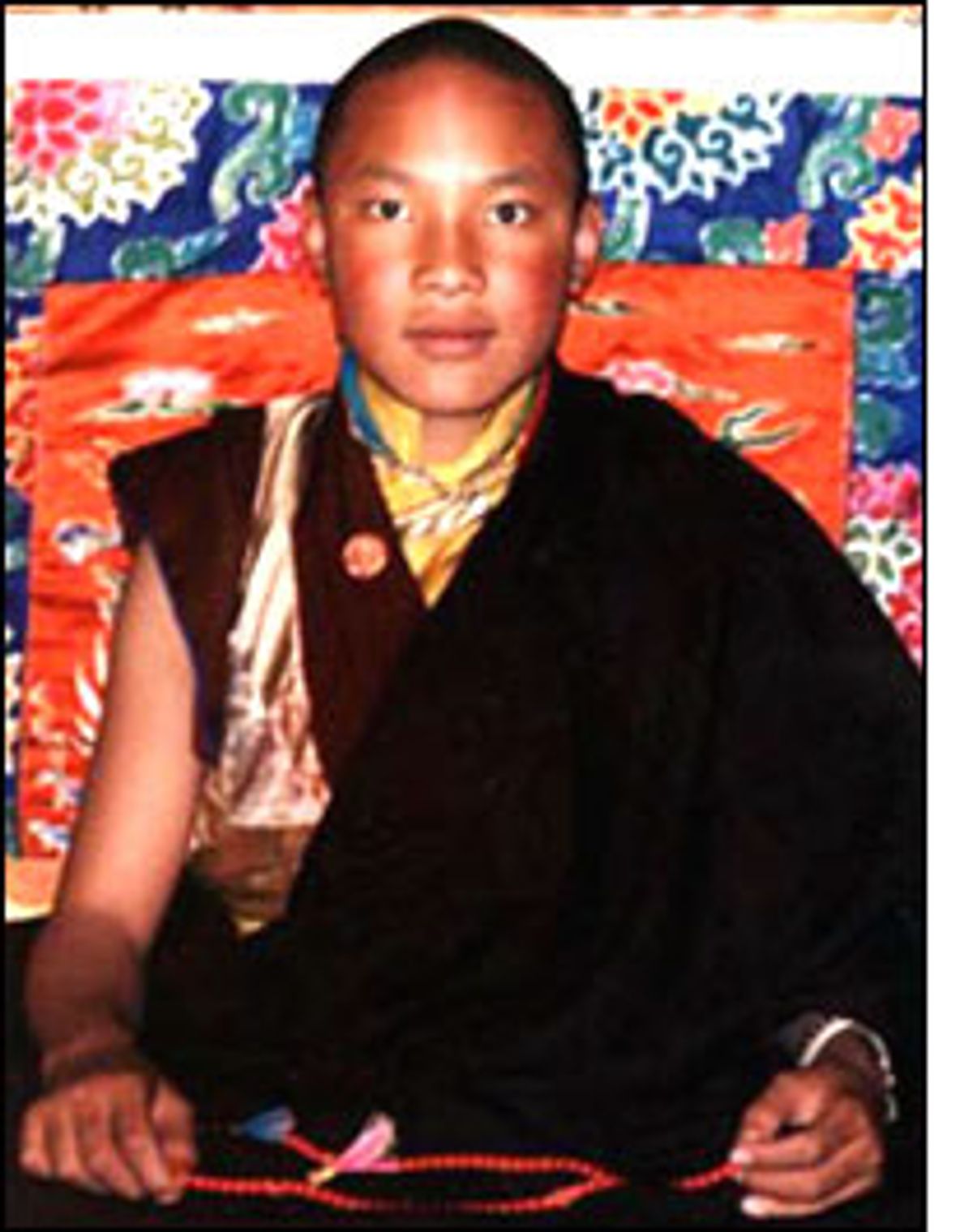 It is hardly a typical case of teenage rebellion. When the 14-year-old Karmapa fled Chinese-controlled Tibet for India earlier this year, he threw international relations between two nuclear-armed superpowers into a tailspin.

On Feb. 19 the child religious leader spoke publicly for the first time since his flight. The Karmapa told a crowd gathered at Dharmsala, India, the headquarters-in-exile of Tibetan Buddhism, that he feared for the survival of his native culture. "Tibet, where great religions and cultures have flourished in the past, is facing a great threat of extinction," he said. "It is scary and frightening." His words directly contradict China's insistence that it respects Tibetan culture.

The arrival of Ugyen Trinley Dorje, the Karmapa -- the only major Tibetan lama recognized by both the Dalai Lama and the Chinese government as a reincarnation of his lineage -- has created a kind of Elian Gonzalez dilemma for India. Both cases involve young boys caught in a political tug of war. China, embarrassed by Trinley Dorje's flight, has been pressuring India not to give him asylum.

But the Indian government is caught between a rock and a hard place, trying to figure out how to allow the Karmapa to stay without worsening relations with China, its powerful and vengeful neighbor to the north.

The Chinese say that if India grants the Karmapa asylum, it would be considered a violation of a pact the two nations have signed to try to improve relations. The Chinese would regard such a move as Indian interference in China's internal affairs, since the government is adamant about its assertion that Tibet is part of China.

The controversy over Trinley Dorje merges politics, spirituality and behind-the-scenes power struggles so Byzantine they rival the court of Henry VIII.

In addition to the Sino-Indian problems the Karmapa's flight has caused, his arrival has sparked another round in the so-called "Lama Wars," highlighting a split within the Tibetan exile community. Most Tibetan Buddhists recognize Trinley Dorje as the 17th Karmapa and the head of the Karma Kagyu order, one of Tibetan Buddhism's four main schools. Two of the regents of Rumtek Monastery in Sikkim, the traditional seat of the Karmu Kagyu order, also believe Trinley Dorje is the reincarnation of the 16th Karmapa. But a third regent, Shamar Rinpoche, opposed Trinley Dorje's selection from the beginning. Shamar recognizes another boy whom he believes is the real reincarnation of the 16th Karmapa.

As it turns out, this obscure internal struggle has cast a shadow over international relations. Since Trinley Dorje's arrival in India, Shamar has been the main proponent of the theory that the teenager is really a Chinese spy, come to further divide the Tibetan exile community. Shamar's critics dismiss his claim as a grab for power.

In April 1994, Shamar tried to install an 11-year-old boy named Tenzin Chentze as the 17th Karmapa at a ceremony in New Delhi. His supporters have asked the Indian prime minister to provide security to Tenzin Chentze so that he can go to Rumtek Monastery in Sikkim, which the 16th Karmapa established as the seat of the Karma Kagyu lineage in exile after he fled Tibet in 1959. Sikkim is another sore point for China -- it claims Sikkim as its territory and does not recognize it as part of India.

For the people jostling for position to see the Karmapa on the last day of Losar, the Tibetan new year, politics was the last thing on their minds.

In the snowcapped Himalayas on a day the peaks disappeared into filmy clouds, hundreds of people gathered on the steps of a temple in Sidhbari, near Dharmasala. The usually quiet yellow and burgundy building, set like a worn jewel beneath the mountains, was swarming with people waiting to be admitted to a public audience with Trinley Dorje, who had fled from Tibet in late December.

They came to celebrate what they consider to be his courageous escape from the tyranny of Chinese-controlled Tibet. Many came to be blessed by the Buddhist leader, the third-ranking figure in the Tibetan spiritual hierarchy, just behind the Dalai Lama and the Panchen Lama.

Taxis and buses began arriving early in the morning and kept on coming, depositing people who climbed the tall monastery steps, their costumes creating a mandala of brilliant colors: women in chubas, traditional Tibetan dresses in emerald green with pearly white blouses and striped aprons; a tiny old woman in a brown skirt, with a braid that reached to the back of her knees, toothless and smiling broadly; monks in burgundy robes; Americans in jeans and black North Face parkas; an Indian guard in olive drab standing at the base of the temple holding an M-16.

But as the hordes kept coming, the festive air took on a frantic edge. Indian security officials assigned to guard the Karmapa barked orders. People were told to shed their jackets, bags, watches, shoes and socks. They were given numbers and ordered to line up, Tibetans in one place, foreigners in another. Then those lines were split into men and women and everyone was patted down before being allowed to enter.

By early afternoon, the doors opened. One by one people filed into a large white room, where they sat in rows on the cold tile floor behind an orange rope. Thangkas, brightly colored Tibetan paintings, hung from beams in the cavernous hall. A huge Buddha, one-story tall, painted gold and wearing orange robes, sat on an altar, staring at the audience. There was a picture of the Dalai Lama, a table piled high with offering food -- plates of Tibetan biscuits, cellophane-wrapped Nestlé Crunch bars, peanuts, seeds.

After 30 minutes, all eyes stared down the hall as an orange door opened and a tall young man in monk's robes was ushered in. Looking older than his 14 years, with a handsome broad face and shaved head, the Karmapa walked to a chair in the center of the altar as security officials stood watchfully, a ragtag secret service detail.

Trinley Dorje began to speak in a soft voice in Tibetan. But the acoustics of the room made his words hard to hear. Even when another monk began to translate into English, only sporadic words came through -- compassion ... sentient beings. Trinley Dorje thanked people for the gracious welcome he had received in India. Fifteen minutes and it was over.

The Karmapa left via the same orange door through which he had appeared. People flung white prayer scarves called katas toward the altar. A rush to the exit to get blessing cords nearly turned into a stampede.

Trinley Dorje's life has already proved so unlikely and dramatic that it far surpasses anything a Hollywood screenwriter could make up. Born to a nomadic Tibetan family in 1985, Ugyen Trinley Dorje was discovered in Lhatok, Tibet, 11 years after the death of the 16th Karmapa. In 1990 a high-ranking rinpoche, or senior monk, discovered a letter inside an amulet that the master had given him before his death, indicating who his reincarnation would be.

Using the information in the letter, a search party of monks from Tsurphu, the traditional seat of the Karmapa, set out to find him. They wound up at the tent where Trinley Dorje lived with his parents and eight brothers and sisters. In June 1992 the Dalai Lama recognized Trinley Dorje as the new Karmapa. A short time later, the Chinese also recognized him. The child was installed in the monastery in Tsurphu.

He lived there until a cold wintry night in December when he climbed out of his bedroom window, telling aides he needed to leave before the Tibetan new year. Eluding Chinese security officers, the teenager, his sister and five others set out on a torturous 875-mile journey. They took the same route the Dalai Lama took when he escaped in 1959. The Karmapa also traveled on horseback, then walked for 12 hours before entering Nepal and eventually flying to India. The Dalai Lama, who was reportedly surprised by the Karmapa's flight, welcomed him to freedom.

A monk who fled with the Buddhist leader says Trinley Dorje left a letter at the Tsurphu Monastery saying he felt he had to go because his repeated requests to be allowed to meet with students and teachers had been ignored. The Chinese have a different story. They agree that he left a letter. But according to Chinese officials, it said he was going abroad to get certain belongings of the 16th Karmapa, and that he did not mean to betray China. They say the letter included assurances that he would return.

Missing from this story is the Karmapa's version of events. Since arriving in India on Jan. 5, he has been kept in virtual seclusion and heavily guarded. Earlier this month, however, he appeared at the celebration of the 60th anniversary of the Dalai Lama's enthronement at age 4. The Karmapa spoke to the public about his concern for the survival of Tibetan culture. "I pray for a better future for Tibet," he said.

Ngodup Burkhar, an interpreter for the Karmapa, has spent several hours a day with him in recent weeks. According to Burkhar, Trinley Dorje is in many ways much like other teenagers. He likes to tease and has a good sense of humor. But Burkhar also notes a sense of disappointment in the Karmapa. "He came here to be free. And he is not free."

What will happen to Trinley Dorje is still unclear. Most likely he will not be formally granted asylum but will be given refugee status like any other Tibetan, including the Dalai Lama. About 2,000 Tibetans come to India each year and are given Tibetan refugee certificates. They are not allowed to vote in Indian elections, but they can study. The Karmapa's teachers would like him to move to Sherabling Monastery, a three-hour drive from Dharmsala, to continue his religious education.

Whatever the final outcome of the Karmapa affair, China will probably be able to tolerate it if the government feels India has not challenged its claim to be the only true Asian global power. India also has something to gain. If it can work out a compromise that allows the Karmapa to remain in the country without confronting China head on, India could boost its image as a country that embraces tolerance and respect for human rights.