Slightly neurotic Russian superstar Zemfira is Elvis, the Sex Pistols and Courtney Love rolled into one. 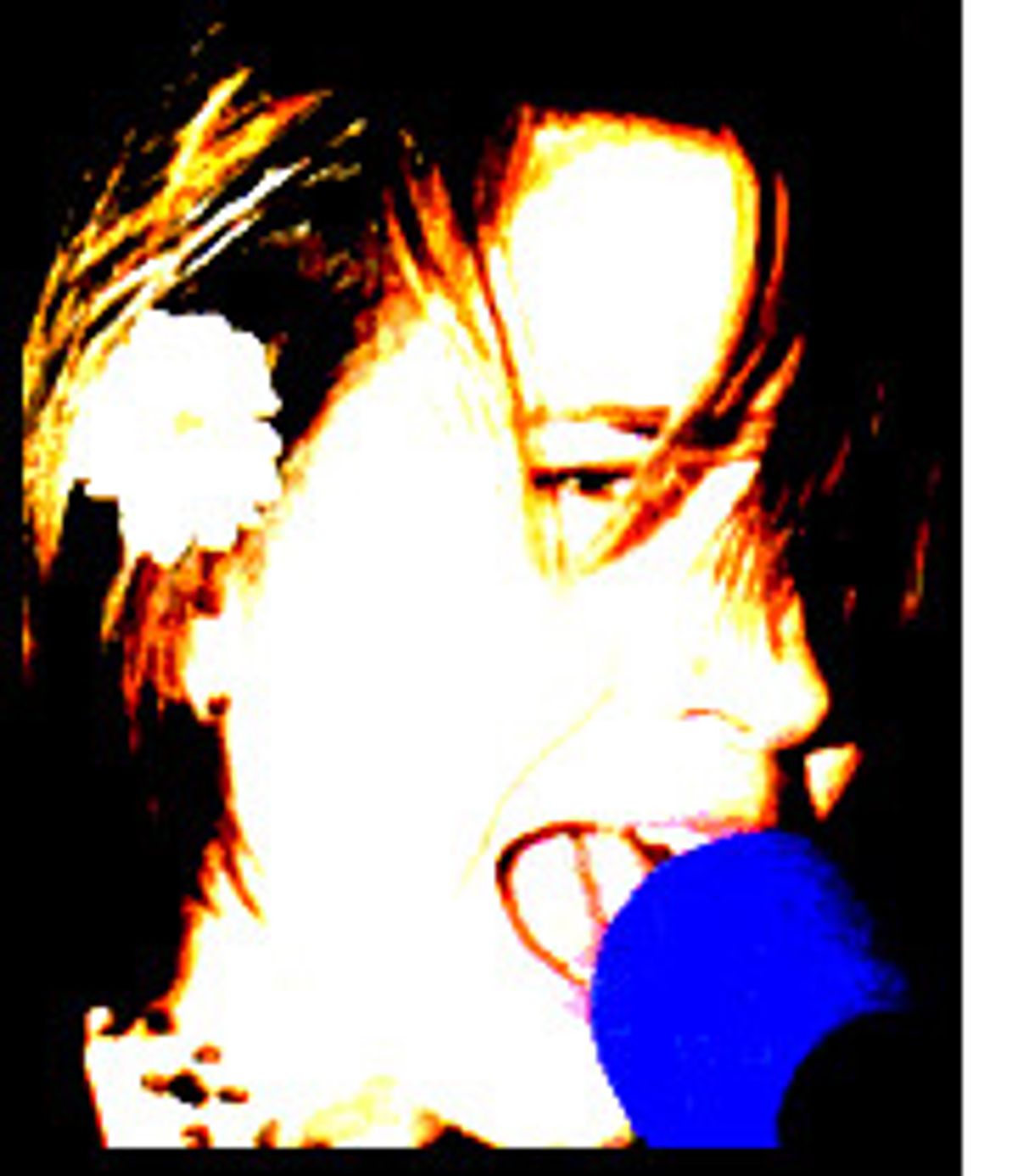 She's a slightly neurotic, platinum-selling alterna-girl. Her lyrics hint that she might be a lesbian, or bi maybe. She, or what she does, wouldn't make anyone faint here in the States. But in Russia, a country that has barely decriminalized homosexuality -- or even seen a female rocker -- the 23-year-old superstar Zemfira is Elvis, the Sex Pistols and Courtney Love rolled into one. The Russian press likes to call her "Kurt Cobain in a dress."

Amid the manufactured crooners of the Russian popscape, Zemfira (just Zemfira) rode a carefully plotted, self-designed upward spiral to success. In a culture still largely silent about HIV, her debut album included an up-tempo ditty titled "AIDS." After it became a hit, millions hummed its refrain: "So I guess we're gonna die."

The first song she released begins with words "I burst into your life, and you freaked out." The gender-specific language in the line identified a woman as the object of the calamitous love story. Zemfira knew the song would blow up in the press, and she was right: The hype around her is enormous. The media now follows her every move; when she recently lost a Walkman, the press turned it into an Interfax news item. Her second album, due out at the end of March, will debut in a stadium ceremony.

There has never been a female rock songwriter in Russia. Cabaret-pop stars, sure, and giggly girl-power knockoffs by the dozen. In a way, it's the dominance of women in easy-listening genres that precludes them from rocking out. Young Russian rock 'n' roll developed its identity, as any adolescent must, through negativity -- namely, via opposition to '80s estrada (officially approved Soviet pop) and '90s popsa (dinky disco on the Italian model).

In the context of Russia's odd musical landscape, rock is easier to define by what it isn't: no synths, no lovelorn lyrics, no gypsy-derived chord progressions in A minor. In short, nothing smacking of popsa -- and that means no girls allowed, either.

Over the past two decades, only a handful of women even came close to the definition of a singer-songwriter. Nastia Poleva sang somebody else's lyrics over her own streamlined new wave. Yanka Dyagileva, a tragic punk amateur, died without a day in a studio, and her waning notoriety hinges on hissy home tapes. Zhanna Aguzarova, the one-time leader of the retro big-beat band Bravo, sings standards in L.A. nightclubs. The funniest, and saddest, facet of the Russian paper flurry around Zemfira is that she gets incessantly compared to these three, as if no music ever existed outside. "With her second album," writes a Moscow magazine, "Zemfira is poised to claim the Lady of Rock chair vacated by Poleva" -- the world's evidently too small for two of these at a time.

Meanwhile, Zemfira's musical influences lie almost entirely outside her homeland. It's easy to hear Suzanne Vega and Portishead in her softer numbers, Alanis Morissette and Ani DiFranco, in the harder-edged stuff. She does, however, write in her mother tongue, and how could she not: Russian audiences, sublimating the fantasy of Western acceptance into a sort of sour-grapes denial, consider writing in English a crude sellout.

Westernized or not, Zemfira's songs are very much her own. "I'm responsible for every note," she often says. And her debut album is blissfully free of meddling producers -- a shocking novelty in Russia, where the music industry is primarily subsidized by shady businessmen managing their girlfriends.

A Tartar by ethnicity, Zemfira grew up in the provincial town of Ufa. "In the age of the Web and MTV, none of this has absolutely any relevance," she defensively stresses in interviews. At 16, she sang eyebrow-raising selections of jazz, soul and Motown in local restaurants. In 1998, while DJing at the town radio station, she cut a CD's worth of self-penned demos on a home computer. The recordings made their way to Ilya Lagutenko -- the leader of the established power-pop band Mumy Troll, who was about to start his own vanity label. From there on, she followed an archetypal ascent: MTV Russia, magazine covers, screaming teenage fans.

Zemfira writes and sings ascetically arranged guitar pop with occasional excursions into bossa nova and jazz chordings. Her voice is fresh and uninhibited, yet she sings "wrong." A recent cover story in the popular magazine Ogonek calls hers "the breaking voice of a generation," even though it is anything but. Still, the idea that someone might willfully leave in an imperfect take, say, or a gleefully improvised yelp, proves surprisingly hard to grasp. The Stateside lo-fi movement was an intellectualized reaction to sterile studio perfectionism (there would be no Sebadoh without REO Speedwagon). But Russian rock, born and bred on illegal dubs of basement tapes, embraced professional production in the past 10 years. The idea of flaunting the lack of it strikes the Russian listener as raging insanity. So does the idea of a debut CD's not containing a single image of the author: The cover of Zemfira's debut is a wallpaper pattern of little pink flowers, a faintly sarcastic nod to girlhood.

Zemfira's lyrics are nonnarrative wordplay informed primarily by its own sound -- hard to translate and harder to comprehend (think early R.E.M.). Yet her imagery invariably creates tiny whirlpools of subtle subversion. The blunt refrain of "AIDS" single-handedly mainstreams a criminally hushed topic, and does so with shocking flippancy: "We're gonna die, la-la." But mostly, she deals in what could be termed reclaimed titillations. "Annie" outraged the country with a cryptic chorus consisting of the words "Annie asked, T-shirts off," without corroborating the scenario. "The Girl Is Ripe," her latest hit, is a self-consciously outrageous rave-up about the "languid self-love" of a bored virgin.

These levelheaded excursions into sexuality are fun, sly and somewhat rude, and make great angry copy -- just like Boston popper Juliana Hatfield declaring in 1994 that all girls are bad guitar players. In the end, however, it's neither Zemfira's larynx nor her lyrics that get the papers hot and bothered. It is the disturbing disparity between the message and the messenger. A ticked-off time bomb of a girl who names Vladimir Nabokov as her favorite writer has usurped the chart positions reserved for homegrown Madonnas. And journalists have gone on the attack. Here is a shortlist of the maddening questions asked in two or three recent interviews by serious newsmagazines:

Do you have a husband?

What does your mother think about your success?

Smoking and a clean strong voice -- an odd combination, isn't it?

But really, what do you think about lesbianism?

Where does such pessimism come from?

You are a young girl -- why are you so depressed?

Why are you so surly?

She answers as best as she can, serving up deadpan platitudes that play well under the circumstances. ("I can repair a car -- why would I not be able to cook?") Newspapers treat her verbal output like a direct communication line to the collective consciousness of the new generation. She gags at the honor. During the hysteria surrounding her first album, she quietly retired to London to record the second. Her quip on the irrelevance of borders is gaining literal meaning. Her target audiences, meanwhile, are busy whipping up Internet shrines, and let the collisions over their idol fall by the side. And that, quite possibly, is Zemfira's greatest achievement to date: The adults can divine the decline of youth that breeds such frivolity -- but apparently, or at least as of now, little girls do understand.