A superb portrayal of the restless and randy travel writer brings us as close to his hidden heart as we're likely to get. 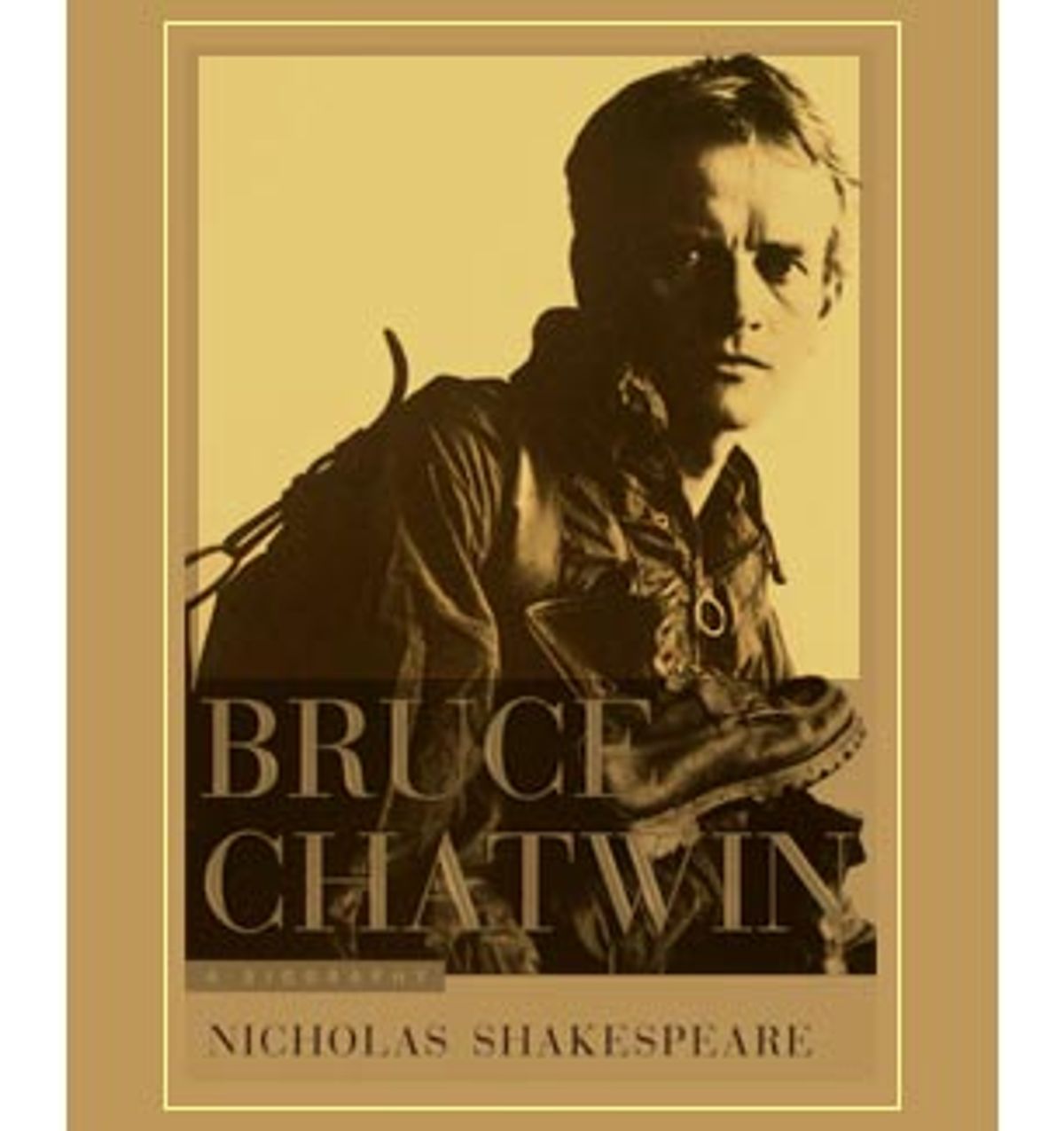 How infinitely appropriate that Bruce Chatwin's first bona fide biographer be an amateur. I mean no disparagement by the term, which I use admiringly, even affectionately, evoking as it does that great tradition of free-range scholarship and catholic intellectualism of which Montaigne and Francis Bacon are just two kindred exemplars. For Chatwin himself fell into that camp; indeed, for the 20th century, one might say he defined it. In his small but superlative oeuvre, Chatwin (1940-89) fused fact, fiction, poetry, science and more than a little hoodoo, sometimes recklessly but always artfully, and always, at heart, as part of an impossibly ambitious attempt to explain the roots of human restlessness.

If his theories were crackpot (as many contend), they were beautifully crackpot -- the product of a brilliant amateur traipsing through any number of disciplines en route, he hoped, to mankind's nomadic quintessence. That Nicholas Shakespeare came to Chatwin as a novelist (and a talented one at that) seems thus a great boon. He treats his subject with an empathy that your assistant professor of literature, tearing at his hair over Chatwin's incessant fact-tweaking and uncategorizable writing, might not have mustered. Shakespeare's biography -- authorized though clearly uncensored -- is unflinching and myth-debunking, to be sure, but never cold or assaultive, a work of broad scholarship and indulgent affinity.

Bruce Chatwin was born into a middle-class family in Birmingham, England, during the flagging of that rusted city's industrial prime -- think Cleveland in the '70s. So perhaps it's no wonder that his earliest fantasies were escapist. "For Bruce," Shakespeare writes, "Birmingham was always a place to leave." And leave he did: first to London, where he went to work for Sotheby's, the venerable auction house, becoming an expert on antiquities and Impressionist paintings while still in his teens; then to Edinburgh for a fitful stint at studying archeology; then back to London as a journalist for the magazine of the Sunday Times, back when, under the stewardship of Francis Wyndham, it regularly ran such highbrow and fabulously untopical theme issues as "One Million Years of Art." But it was the leaving, more than anything else, that appealed to Chatwin; in his later life, home -- no matter its ever-shifting locus -- was always a place to leave. As one acquaintance put it, "He never knew where to be. It was always somewhere else."

This isn't the sort of outlook that enkindles marital bliss, but Elizabeth, Chatwin's wife of 23 years, "was unlike most wives," as Shakespeare understates. "Bruce's actions" -- meaning his constant flitting to more languorous latitudes, his moody if typically writerly demands for solitude and, most famously, his long and haphazard drift of homosexual affairs (which led to his death, at the age of 48, from an AIDS-related illness) -- "would have caused most people to leave him, but Elizabeth did not." The marriage was surely one of Chatwin's more curious and curiosity-inspiring endeavors, considering that nearly everything he did seemed opposed to it; the portrait that emerges here is of a splintered but sturdy partnership, functional where it was necessary, nonexistent where it was not -- a genuine entente, as one friend put it, that proved again and again resistant to the strains of Chatwin's polymorphous nomadism.

Shakespeare's powder-dry prose can sometimes plod on, step by step, like one of Chatwin's peripatetic alter egos, yet the whole feels almost damply eloquent. There's a reason: Among Shakespeare's interviewees were Salman Rushdie, Gita Mehta, Susan Sontag, Barbara Epstein, Edmund White and the late Stephen Spender, to list but a few, and their trenchant commentary imbues the book with such an enameled luster that there's no need for added sheen. Less glittery, but no less stimulating, are the voices of the numberless contacts Chatwin made in his zigzaggy forays around the globe -- forays that Shakespeare retraced, as his acknowledgments reveal, to a dizzying degree; he tosses out thank-yous to hosts in France, Hungary, Italy, Greece, India, Nepal, Benin, Morocco, South Africa, Argentina, Chile, Brazil, Australia, New Zealand and the United States (to list, again, but a few).

Shakespeare's ultimate accomplishment, nonetheless, is in making Bruce Chatwin -- that icy vapor who darted, often maddeningly, just behind his sentences -- finally corporeal. Here is Chatwin in the flesh, the too-pretty blue-eyed Wunderkind stripped of pretense, stripped of myth but at last warmly and tremendously human. Several years ago, on a remote island off the southern Chilean coast, I stumbled upon a lakeside cabin Chatwin had briefly lived in. The cabin's owner led me inside, where he had maintained Chatwin's office just as the writer had left it; not a paper had been moved. It was startlingly austere, even heartlessly so, and I wondered then how Chatwin could have produced, in such a drab and angular setting, the fierce color and tinsel-like detail that filled his pages. But that, as I found in rereading, was Chatwin: a blazing but enigmatic intellect sparkling with tinsel and color but devoid, as Rushdie once said, of heart. For those of us who have yearned to see that heart, Nicholas Shakespeare brings us, with this moving and elegant biography, as close as we're going to get.