Help! I'm suffering from genvy: The acute envy of one generation for another. 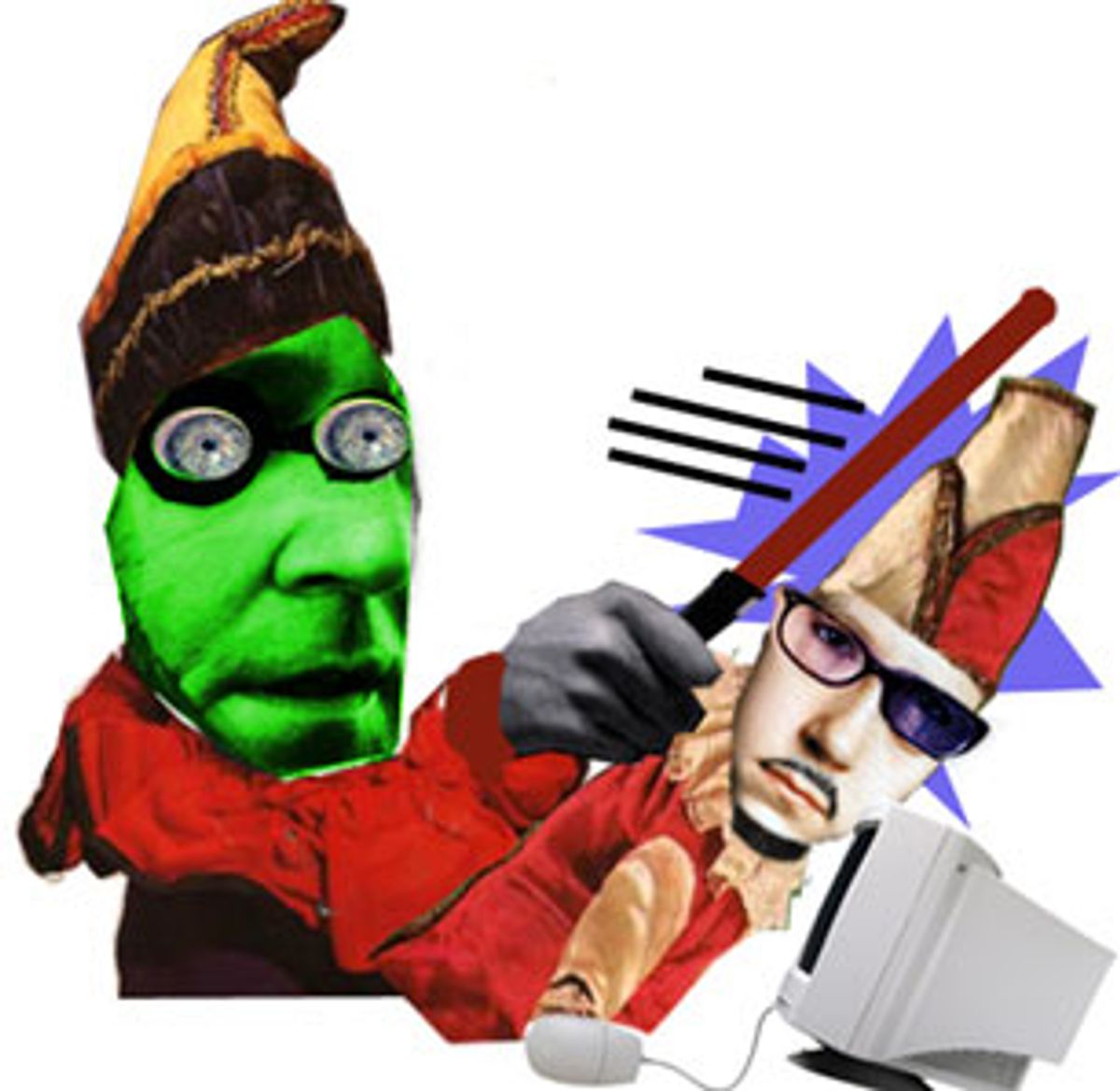 Putting aside my own sorry generation for the moment -- I'll get there soon enough -- has there ever been a more grating bunch of people than the current crop of 20-somethings? Don't you just want to smack one sometimes? Of course you do. Don't be ashamed of that feeling. It's natural. Let's talk about it.

Like most disagreeable things in life, negative feelings about 20-somethings should be blamed on the media. Slackers, Gen X, grunge kids -- whatever. Far too much ink has been spilled trying to coax a bunch of disgruntled juvies into one package or another. Until recently, it was fairly easy to dismiss all of this misspent type and move on to things that actually mattered, like Marv Albert's sex life.

But now everything has changed. Now these people are young men and women. And lying in wait under those mopey expressions, it turns out, were the toothy smiles of Internet tycoons. The slackers have backers! They're mutating into millionaires!

The result: more damn coverage. Not a day passes without another story about a 20-something entrepreneur funded by a 20-something venture capitalist launching an Internet company aimed at the only demographic that matters anymore: 20-somethings. And these dot.com kids aren't just getting obscenely rich at an obscenely young age; they're changing the world as we know it. They are "revolutionaries," as Bob Simon repeatedly referred to them on a recent segment of "60 Minutes II." Which might be easier to stomach if it didn't happen to be, quite possibly, true.

I feel your anger.

I am, at 37, no longer in any demographic that matters. Other than the not mattering part, which stings a little, 37 is a fine age. There are even occasions when 37 can seem young, as if the numbers 3 and 7 were some sort of clerical error. You remind yourself of all the great professional athletes who are 37. (Um, Patrick Ewing.) Then you put on an old album by a great defunct band like the Feelies and rock out in the living room until your 3-year-old walks in and tells you to stop acting "stupid."

I envy 20-somethings, but it's not their youth or their freedom or their hot little hardbodies that I envy. No, the place from which my rancor pours -- the true source of my bile -- is their timing. Because, by some inexplicable (and unjust) force of dumb chance or intergalactic intelligence, this generation has landed in its 20s at an especially opportune moment in human history.

The Internet boom of the last few years is one of those seismic shifts societies go through now and then that get put in uppercase letters, like the Dawn of Democracy. It's nice to be around for such occasions because they make life more interesting. But it is particularly nice to be around and very young.

When you're young, you have little to lose and much to gain from massive social or economic rearrangements. You have no career to tank, no family to support, fewer promises to keep, fewer wounds to lick. In short, you are in a good position to fully enjoy whatever lunacy is at hand.

Furthermore -- and this is important -- you're still cocky enough to imagine yourself a "revolutionary." So as you sip your single malt amid the warm glow of your Louis Vuitton accessories, you aren't just one more cutthroat, nest-feathering capitalist -- you're the architect of a better world.

There's no good word for what I feel for these dot.commies so I made one up: genvy. It means acute envy of a member of one generation for another generation. For a good example of genvy -- a case study -- see Tom Brokaw's book "The Greatest Generation," in which anchorman Brokaw heaps praise upon the men and women who spent their youths fighting World War II and saving the world from tyranny. (While Brokaw presumably spent his youth learning to speak in a very deep voice.)

Genvy is what I used to feel for the generation that came of age during the '60s -- which still has to be the finest time ever to have been young. In five or six years, the children of America transformed themselves from clean-cut, church-going virgins into unshorn, drug-addled sex-degenerates. And, like 20-somethings today, they did it all under the pretext that it absolutely mattered.

Now that old feeling is coming back: genvy. (This is the last time I'll use the word, I swear.) It's more unpleasant this time around, though, because now I have my own youth for comparison. I've seen myself and my peers pass through the gantlet of our 20s. And I am forced to accept that my generation -- the generation that came of age in the "go-go '80s" -- is the most luckless and lackluster generation that ever walked the earth.

So I land, at last, upon my real subject. I'm talking about my generation: people born, say, between 1958 and 1966. It's true that the demographers lump us in with boomers or Gen X, but the demographers are wrong. We have little in common with either group. For those having a hard time placing us: We are the generation that entered our 20s under the rule of Ronald Reagan, an air-head septuagenarian for whom most of us enthusiastically voted.

We are the generation that produced "writers" like Brett Easton Ellis, Tama Janowitz and Jay McInerney.

We are the generation that bought investment banking as an exciting and sexy profession.

We are the generation that made Charlie Sheen a movie star.

We are the generation that said "Just say no."

We are the generation that lived through the merger of Time and Warner.

Exciting things did happen when we were young. The Berlin Wall fell. Tianamen Square erupted. It's just that these things inevitably happened elsewhere. As for our own generation-defining, history-making acts of daring -- well, there were none. We were too busy aspiring to new levels of mediocrity. At the college I attended, the great life ambition of 98 percent of us was to make executive V.P. at Proctor & Gamble. If recent class notes are any indication, many of us got exactly what we wished for.

It's senseless to waste five minutes thinking up a clever term for a generation as insipid as my own. But here's one that took five seconds: Generation Sucks.

How we got to be so sucky is a matter for history and science to decide. My own theory is that we were ruined by the '70s. It was in the '70s that we first became aware of the world outside our backyards, and what a dreary world it was. Watergate backwash. Recession. Gas lines. Jimmy Carter. Hostages in Iran. The Bee Gees. The impact of all of this on our young selves was crippling. By the time we made it into the placid '80s, we were just happy to be alive.

My point: It's not really our fault that we turned out this way. Generations don't make history; history makes generations. The fact that the Internet boom decided to happen now -- a few years too late for our maximum profit and pleasure -- this is just further proof that cosmic forces conspire against us.

So here we are now, my fellow Gen Suckers. We're nearing and entering middle age, a forgotten and forgettable generation, and the sands are shifting fast beneath our feet. For a lucky and daring few, the Internet boom will be an opportunity to strike it rich and partake of the great bounty. But for most of us, these next few years will see us grasping at outmoded jobs and struggling to learn new ways while others get rich.

And to make matters worse, that kid we used to baby-sit? Our buddy's drooling little brother we made fun of when we were stoned? He's our 25-year-old CEO now. Because he -- damn him and his kind -- started the Internet company that just bought the company that merged with the company where we just got promoted to executive V.P.

I'm sure there is a better response to all of this than anger and envy, a way of looking at it that won't lead to myocardial infarction. (We Suckers have to start worrying about such things.) One of these was suggested to me by a fellow 37-year-old I met on jury duty recently. We got into one of those spill-gut conversations you get into on jury duty and when I professed my feelings about our luckless generation, my fellow juror clucked his tongue. Oh, no, he corrected me, we play a very important role in this New World. We are the "bridge" between the upstarts and the old farts. We have a foot in either generation and so we can "explain" them to each other.

For a few days, I liked the sound of this. But then I started to reflect upon what it means to be a bridge. You're a hard, cold immobile structure that gets walked all over as they -- the other guys -- meet and trade. Who wants to be a bridge?

No, thanks. I'll take anger and envy. You want to smack a 20-something? Claim that feeling. Go for it.

Jim Rasenberger is a screenwriter in New York. He has written for Vanity Fair, New York and Yahoo! Internet Life.