The distinguished British biographer turns the spotlight on his dubious family and himself. 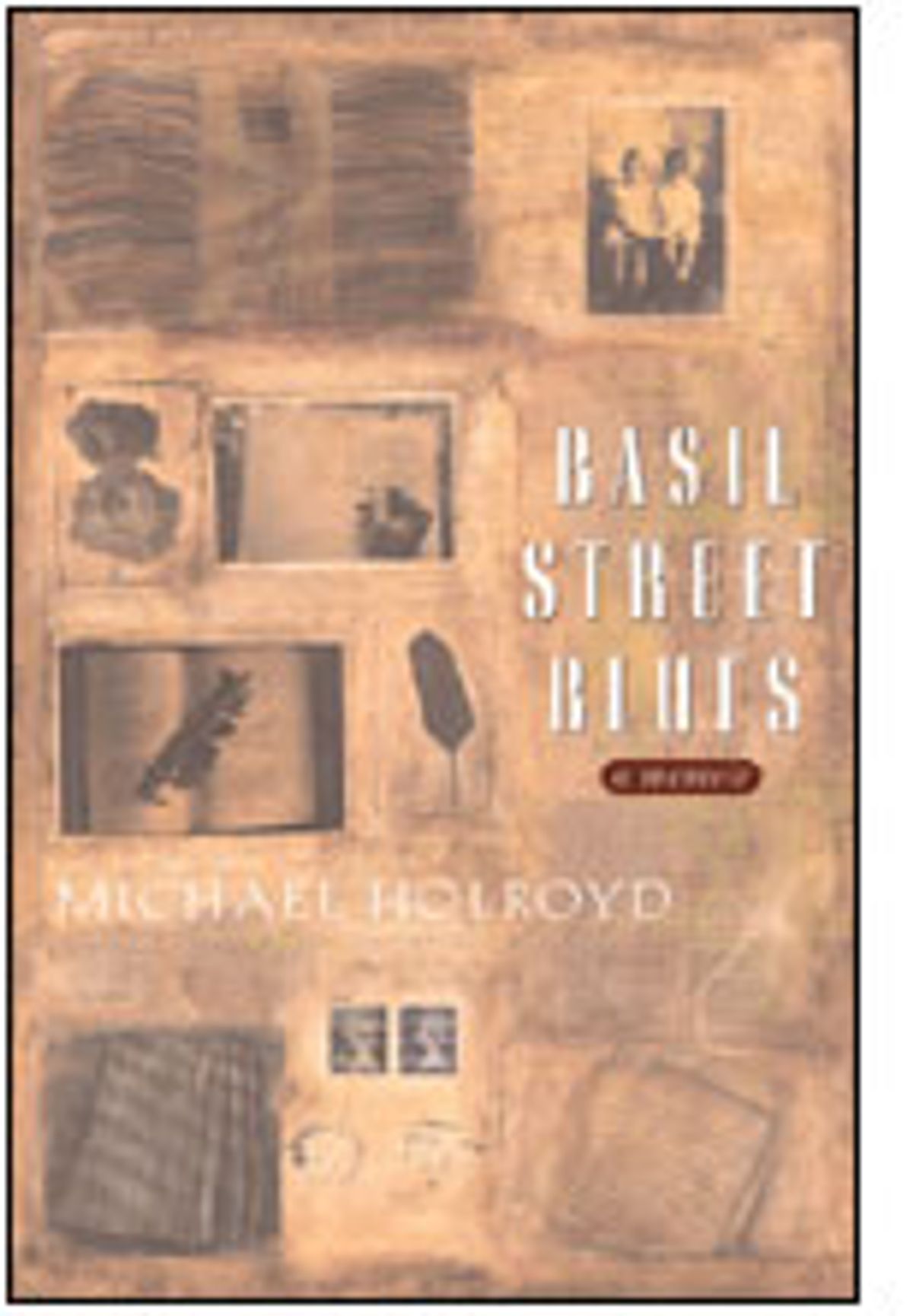 Michael Holroyd's massive four-volume biography of Bernard Shaw was published between 1988 and 1992; following his equally distinguished lives of Lytton Strachey and the painter Augustus John, it confirmed his reputation as the consummate British biographer, seamlessly weaving narrative from the utterances of his subjects. His literary reputation established, it seems it's now time for a little self-indulgence. Holroyd calls "Basil Street Blues" a "vicarious autobiography." Starting with his parents and tracing his family back into the 19th century, he tries to explain who he is by turning the biographer's art on his own people. Despite the abundance of oddities in the Holroyd attic, though, what should be an elegant exercise -- part memoir, part "behind the scenes with the biographer" -- fails to transcend the glittering bits of the past that Holroyd has collected.

In the late '70s, Holroyd asked his parents -- long divorced and repeatedly remarried -- to write accounts of their early lives. After their deaths nearly a decade later, he "began to feel the need to fill the space they left with a story." The writer so skilled at shaping the messy lives of his famous subjects needed to discover the shape of his own narrative. But there was no one left to answer his questions, just his parents' handwritten pages along with some yellowing family papers and the bare-bones data filed at public-record offices.

The Holroyds appear to be the kind of family capable of keeping several biographers busy. Michael's Scottish great-grandmother's death certificate reports "suicide by carbolic acid." The family fortune was founded on shares in the Rajmai Tea Co., a legacy of his great-grandfather's career in India. His grandfather married the second youngest of 11 charismatic Irish sisters and pinned his entrepreneurial hopes on Lalique art glass, for which he became the sole London agent in the late '20s, selling fanciful, fragile trinkets in the face of an increasingly grim world climate.

For a rather buttoned-down, Eton-and-Oxbridge sort of family, there was also plenty of sexual subterfuge. That same grandfather, after 25 years of marriage, suddenly abandoned his family for a voluptuous younger woman with a veiled past, setting her up in a Piccadilly flat. Holroyd's Swedish maternal grandmother made the scene in Stockholm, trailing bohemian artists in her wake. His own conception precipitated his parents' secret marriage, the bride a teenage ingenue just off the boat from Sweden. Most of this information is gleaned from family detective work, and though there's plenty of color between the lines of what Holroyd finds, he never quite manages to lift the story off the dusty facts.

Once his younger self enters the narrative, the arc of the story begins to descend; the Holroyds as Michael knew them were a family locked in slow, sad decline. "As a child I had the double experience of my parents' marriage that had unhappily broken up, and my grandparents' marriage that had been unhappily kept going," he writes, describing an increasingly impoverished home life saturated with "extraordinary anguish and venom." But the menagerie of relatives he lived with -- defeated grandfather, senile grandmother, disillusioned spinster aunt -- is just a collection of unfinished outlines here. In contrast, when Holroyd quotes from his early autobiographical novel, "A Dog's Life," the fictional versions of his family members pop up from the page. If only the biographer had allowed himself a little more novelistic brio.

Biography, in fact, seems to get in the way. Holroyd professes a sort of self-conscious angst as he mines certain family documents: "For if I read them am I not trespassing?" It's the kind of question most memoirists answer before they start writing -- what are we readers supposed to do with it? Holroyd worries that he has become what James Joyce called a "biografiend," but a true biografiend would write first and ask questions later.

Subsequent sections of the book move away from the extended family and settle more squarely on Holroyd himself: his Eton days, his apprenticeship at a law firm, his misadventures in the military. During these years "I perfected the art of being overlooked," he writes. "I was losing my identity, fading from notice, and feeling all the better for it." Doesn't sound like the voice of a man who would want to present himself to the world in print, and that's a central problem with this book. A biographer by definition injects as little as possible of himself into the lives of his subjects; unfortunately, even when his subject is himself, Holroyd maintains too much of this reserve. We observe the genesis of Holroyd the writer but never actually meet Holroyd the man.

He finally circles back to his parents, elderly and gradually running down like clocks. Their endings are a blur of therapies and cataract surgeries and home health aides, a depressing litany delivered with less art or insight than other writers have brought to the same theme. Though it's always uncomfortable to criticize a life, it's not out of line to question why it is being offered for public consumption. "Basil Street Blues," despite moments of thoughtfulness, never silences that question.