What to do when airlines bait and switch, plus advice on the Delaware-Virginia question and nonpackage tours of England and Ireland. 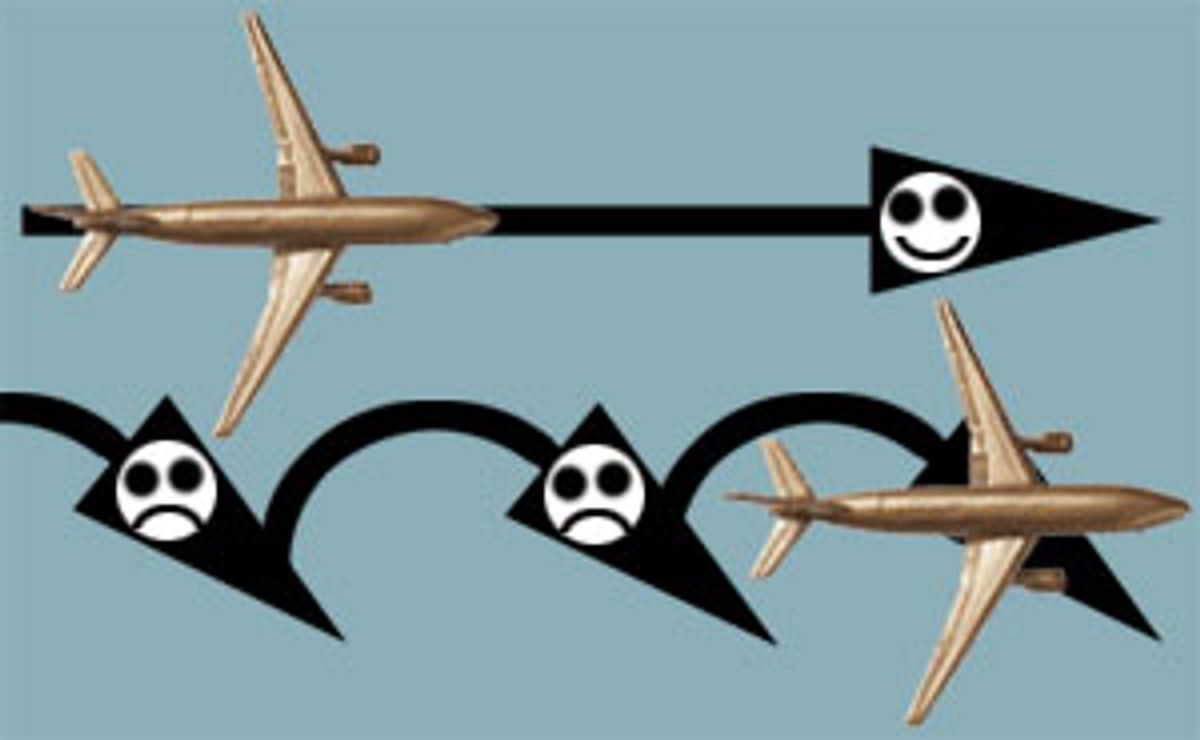 Does a passenger have any recourse against an airline that stops flying nonstop to a destination after the ticket is booked? In other words, the flight would now require a stopover.

Your complaint is valid -- any savvy traveler prefers a nonstop to a trip with connecting flights -- but I doubt the airline is going to be too sympathetic. If you get no satisfaction dealing with a reservations agent, write to the airline's customer relations department (get the customer relations manager's name and address by calling the toll-free reservations number), briefly state your complaint and ask for a refund.

Possibly the airline will offer you a coupon to appease you, but I wouldn't get my hopes up about the refund.

Arguably the airline has switched what it promised to provide you, but there's fine print on the ticket -- which few ever read, or even could read in the case of an e-ticket -- that says, "Carrier may ... alter or omit stopping places shown on the ticket in case of necessity."

A site that focuses on passengers complaints -- and has a section for voicing them -- is PassengerRights.com

For a summer vacation, can you advise us about how Chincoteague, Va., compares with Lewes, Del. We've got two kids under 6 who need to be entertained, even when the weather doesn't cooperate.

Chincoteague, best known for its wild pony roundup, and Lewes -- a ferry ride across Delaware Bay from Cape May -- are both outstanding destinations for a waterside week away. Both destinations have their own special character and are absent the honky-tonk feel of some beach towns.

Chincoteague is more off the beaten path. You drive across a long viaduct to reach Chincoteague Island and the tidal basins that surround it. It has a few two-story hotels and an array of B&Bs, plus many cottage rentals.

A few minutes and one short bridge away is Assateague Island National Seashore, with a sprawling beach and wildlife preserve that is home to the ponies made famous in a 1947 book called "Misty of Chincoteague." The third Wednesday and Thursday of each July is the Pony Swim and Auction, in which the wild herd is rounded up and prodded across a small bay to Chincoteague. Tens of thousands of people show up for the pony penning and related activities. This year's key dates are July 26-27, and the whole month of July offers carnivals and other events.

Lewes is a small town with a charming, historic main street. It's a short drive from beaches on Delaware Bay and, on the ocean, from Cape Henlopen State Park. The bay beach is calm and well-suited to younger children and families, while the ocean beach offers refreshing surf along a gorgeous stretch of undeveloped coastline.

Lewes is only minutes away from Rehoboth Beach, Del., where you'll find a bustling boardwalk, one of the country's largest clusters of outlet malls and an array of water rides and other attractions that kids love.

On balance, Lewes and the northern Delaware coastline have a wider variety of diversions, including that discount shopping in a state with no sales tax. Chincoteague is better for getting away from it all in a soothing setting where seafood and natural attractions dominate.

My fiancie and I plan to honeymoon in England and Ireland, but we aren't interested in package tours. We are trying to find ways to see both countries for two weeks without emptying our pockets. We'd like to hit London and the surrounding countryside (especially Bath), explore Wales a bit and then see Dublin and, all the way on the other side of Ireland, Galway and Kerry. Any suggestions?

My first suggestion is to leave time in your itinerary for savoring the moment -- your destinations are winners, but if you're constantly on the run, you risk getting into the too-many-stops-in-too-little-time grind. It's a quandary, but tackling England, Wales and Ireland in two weeks can wear you down if you're not careful.

Still, there are many independent guides that'll help you cover as much ground as you wish, including TripBuilder, a compact guide that helps you plot an itinerary using a color-coded fold-out map keyed to the themes and attractions you find most appealing. Among topics in the England guide are charming villages, historic castles, country gardens, cathedrals, stately homes, best museums, royalty watching and easy day trips from London. There's also a separate guide for London. If you can't find the TripBuilder series, call (800) 525-9745.

Another good planner is Rick Steves's "Europe Through the Back Door: The Travel Skills Handbook for Independent Travelers" (John Muir Publications, 1999). It's packed with time-tested itinerary-planning advice and offers suggestions for several of the areas you're targeting. It also describes rail passes, including the BritRail Plus Ireland Pass. The Rick Steves series also includes a book on Great Britain and Ireland.

The British Tourist Authority and the Irish Tourist Board both have sites with information for independent travel planning. The BTA's phone number is (800) 462-2748.

Finally, BritRail's British Travel Shop has a 12-page catalog with dozens of guides and maps covering the United Kingdom and Ireland. Get it by calling (212) 490-6688.

A recent column on crossing the U.S.-Canadian border brought this account from reader J.M.:

As you mentioned, getting into Canada is no problem. However, getting back into the United States can be. Having just bought a new car, my wife and I drove from the West Coast to Minnesota. At the U.S. border coming back, I was asked to produce the "bill of sale" for the vehicle since it had only "paper plates." After all the luggage was removed from the car and searched, as well as the vehicle, "wants and warrants" checks were run on both of us. After over two hours we were released to repack our car and leave.