The loosey-goosey South Central romp could use a translator for Clueless White People, but it's packed with physica 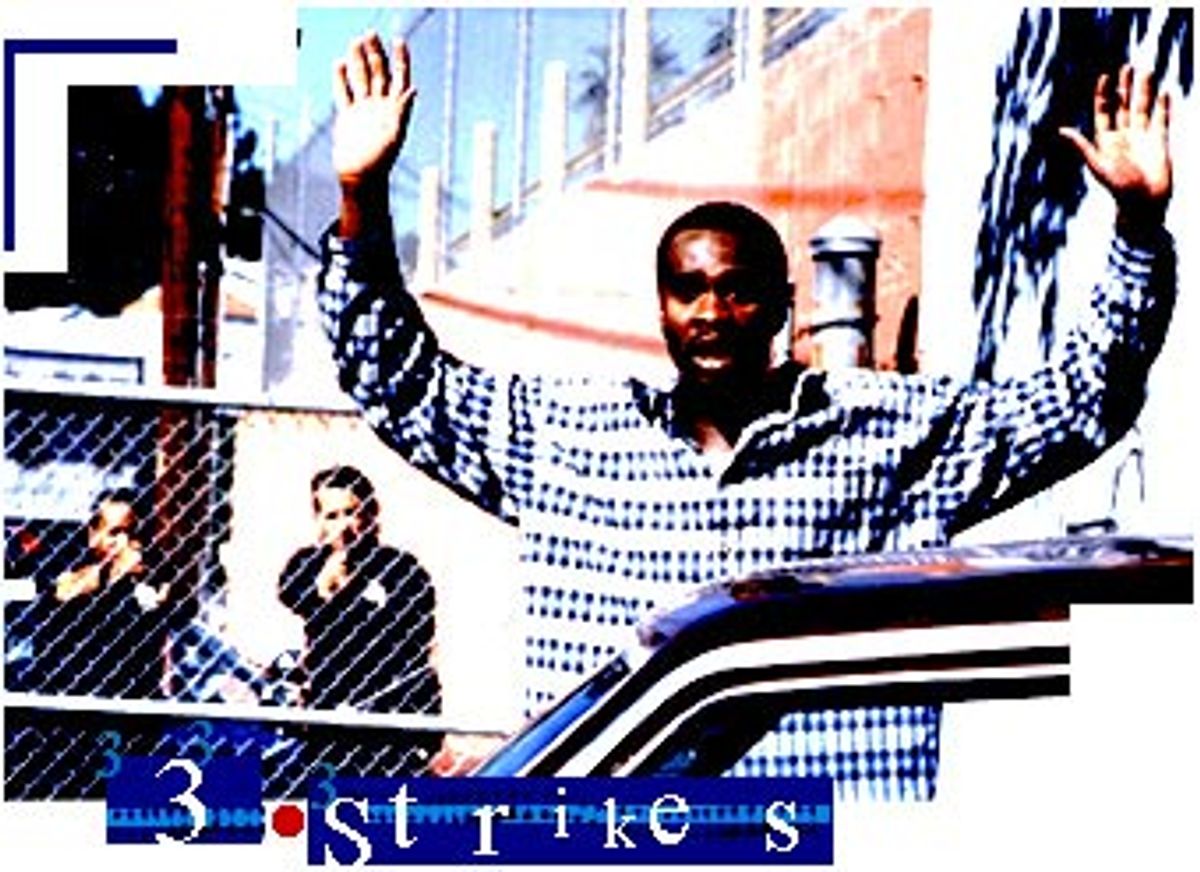 "3 Strikes" is a dumb and sloppy movie, but it packs a few decent laughs, an impressive array of comic actors and several booty-whomping hip-hop hits into its 82 minutes -- and for non-black viewers like me it's instructive as well. This loosey-goosey romp through the streets and boudoirs of South Central L.A. is precisely the kind of film made by and for African-Americans that's all but ignored by the mainstream media (there was no press screening, so I saw it in a Times Square theater on opening night). Like "How to Be a Player," "I Got the Hook Up" or "Friday" (which was co-written by D.J. Pooh, who makes his directorial debut here), "3 Strikes" will play for a few weeks in what the entertainment trade magazines call "urban markets" before disappearing onto home video.

In terms of filmmaking technique, "3 Strikes" clearly lacks the Hollywood polish of, say, "The Whole Nine Yards," but it's funnier, truer to life and even has something resembling a point. You might think that a movie about an unarmed black man on the run from a group of murderous, corrupt cops would carry a little extra resonance in the week when the real world gave us the Amadou Diallo verdict. But then, African-American humor has often involved seeing the comedy in injustice and outrage -- last year's "Life," a delicious ensemble film starring Eddie Murphy and Martin Lawrence, was about two men wrongfully convicted of murder and sentenced to a lifetime of breaking rocks on the chain gang.

Mind you, "3 Strikes" is no preachy social-message film. Its hero, Rob (Brian Hooks), is a likable ne'er-do-well who's being turned loose after a yearlong stint in the L.A. County Jail. Under California's notorious three-strikes law, he faces a mandatory 25-year sentence if he goes back to prison, even for a relatively minor crime like shoplifting or purse-snatching. Rob's sufficiently spooked by this that he imagines the stern white anti-crime politician he sees on TV is talking to him: "That's right, Rob. Fuck up again and it's yo' ass!" Rob's a stock comic figure; we enjoy his company, but we can tell right away that he lacks the common sense, willpower and plain good luck to stay out of trouble.

Much of the delight to be found in "3 Strikes" comes simply from watching Hooks, a rubber-faced goony bird who has a little Murphy and a little Jim Carrey about him, even if he doesn't quite possess the distinctive genius of either. (Previously, Hooks has had small roles in "Beloved" and "Bulworth," among other films.) He bounces through scenes with puppylike enthusiasm: When talking to his sexy girlfriend (N'Bushe Wright), he can't help turning the middle vowel in "I lo-o-ove you" into an exaggerated, sarcastic diphthong; he answers the phone with a hilarious white-boy impression; he humps a hotel-room mattress for no reason. One of the biggest problems with the tedious O.J.-style chase sequence at the film's climax is that it traps Hooks in a moving car with almost nothing to say or do.

Within minutes of his release, Rob is a wanted fugitive; the homeboy dispatched to pick him up, it turns out, is driving a stolen car and packing heat. A violent confrontation with the Highway Patrol ensues, and Rob is captured by the cops' dashboard camera as he flees on foot. Featured on the evening news as the "Freeway Shootout Suspect," Rob must run from both the cops and Tone (Faizon Love), a neighborhood gangster who's angry that Rob abandoned the driver to be shot and arrested. Black-made movies are full of guys like Tone, but few white directors would dare create such a caricature; he's a huge, Fubu-clad thug with a pregnant girlfriend on the couch, a back yard full of pit bulls and a full set of tires on the living-room floor (never explained).

Then there's Mike (played by the rapper and actor E40), an equally enormous barbershop entrepreneur who wants to help Rob, whom he addresses as "my Weeble." (E40 seems to speak partly in his own invented dialect, but there were definitely moments in "3 Strikes" when I could have used an interpreter for Clueless White People.) In his quest to prove that he wasn't involved with the shooting, Rob also falls briefly into the clutches of Dahlia (De' Aundra Bonds), a large-and-in-charge woman with a serious love jones and a treasure trove of sex toys. In fact, for all the predictable and sometimes cheap humor of Pooh's script, almost every performer in the film gets a chance to shine and seizes it. That they're all virtually unknown to, ahem, "general audiences" only demonstrates how Hollywood's Y2K race problem works: There's room for a few black stars, but almost none for supporting players and character actors.

Like many African-American films, "3 Strikes" depicts a world where whites exist only as marginal, buffoonish characters: a simpering hotel clerk, a snoring parole officer, an incompetent cop. If Pooh's narrative is a little clunky, his dialogue comes fast and street-deep; I lost count of the "N-word" after the first 50 or so. There may be some condescension in the film's treatment of whites, but there's no outright hostility. Interestingly, the deranged hothead cop who seems most determined to hunt down Rob and kill him is black (played by David Alan Grier, once of "In Living Color"). Outside of one scene in which a ghetto woman wearing alarming press-on nails calls Grier a sellout, the issue of race is never mentioned. Of course, a movie aimed at urban black audiences hardly needs to explain that racism persists in America, but Pooh seems to argue that, as persecuted as Rob may be, he's ultimately the author of his own destiny.

Pooh's filmmaking is generally undistinguished, and some of it is distinctly subpar: In one indoor scene Wright casts a huge, dark shadow that's clearly caused by the klieg lights, while an editing error in a late courtroom scene takes Rob's family from loud bickering to stony silence in a split-second. And his script is no better than a loosely connected web of comic sketches and character turns, peppered with dud jokes and dead spots. But Hooks is a genuine star in the making -- if he can get any decent roles -- and the rest of the talent-rich cast is full of small discoveries that render the ride painless enough.