Not my cup of tea

Complaining about British food may be old hat, but, well, it's just so awful. 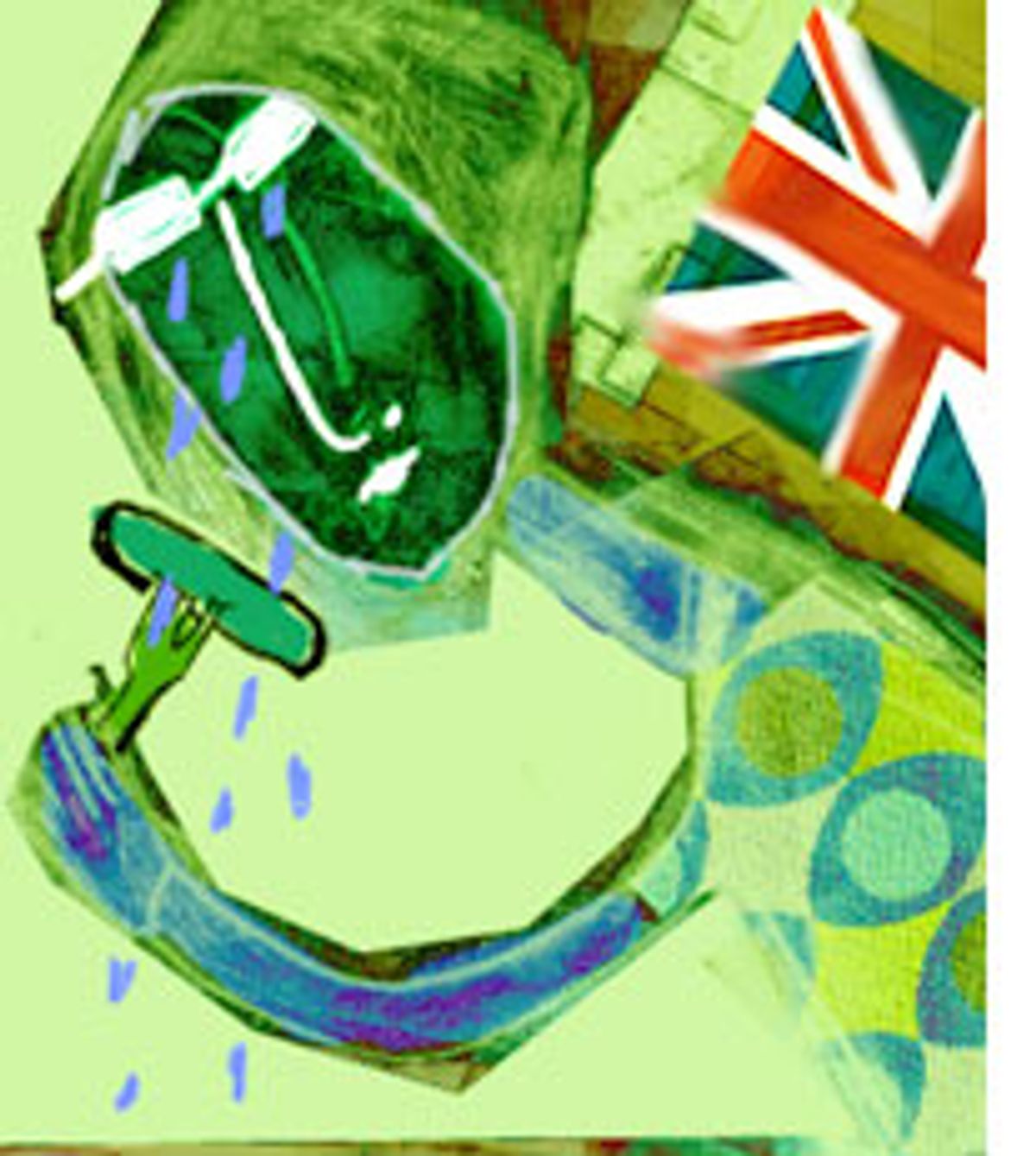 Spotted dick. Bangers and mash.
Clotted cream. Blood pudding. Leave it
to
the Brits to invent menu items that
sound more like terminal diseases. If I
were in a foul mood I would say that the
term "bad British food" is
redundant. Well, I am in a foul mood,
because I've been thinking back on the
time I spent as a travel writer in
southern England.

I went to England for the first time in
1994 as a writer for the Berkeley
Guides, a student-oriented offshoot of
Fodor's travel guides. My assignment
was to navigate through the region for
six weeks and update a guide to Great
Britain. I had a decent daily stipend --
enough to cover hostels, inexpensive
B&Bs, tourist sites and cheap food --
and a bright yellow and purple
backpack.

My culinary misadventures began in the
town of Dorset. Dorset is Thomas
Hardy country, as the tourist bureau
will endlessly remind you. Happily the
town itself is a lot more cheery than
your average Hardy novel. I made my
way to a nice-looking restaurant with a
sandwich board out front advertising
the soup of the day: split pea. I
naively thought to myself, if they have
a
soup of the day, it must be made fresh.
I sat down and ordered the split pea
soup. What showed up was thick and
green, with a congealed top layer and
the unmistakable taste of canned soup.

How is this possible? I thought. How can
you offer a soup of the day and
then shamelessly heat up a can and serve
it? I looked down at the chartreuse
liquid and became so angry, so
frustrated, I actually started to cry
right
into the offending substance. Finally a
waitress approached my table. "That
wasn't really what you wanted, was it?"
she diplomatically asked. I started
to stutter something about "soup of the
day ... can ... don't understand." I
managed to ask her for some bread and
butter.

A week or so later I took a bus to the
town of Rye. I arrived late at my B&B,
cold, hungry and dead tired. The
friendly innkeeper pointed me toward a
pub
about a half-mile down the road. It must
have been about 10 p.m. as I walked
in the direction of the pub. No one was
around and it was foggy and
desolate. American Werewolf in Rye, I
thought to myself, just waiting for a
hairy lupine creature to come careening
out of the woods and make a few
undead jokes before devouring me. But
soon I saw lights coming from a
building up the road. The pub was still
open. My spirits perked up and my
stomach lurched to attention, with the
feeling that it might soon be fed.

The inside of the pub did a little to
alleviate my monster-movie fantasies.
A few people were standing around the
bar and chatting. They seemed like
relatives of the pub owner, with a baby
in a stroller. I examined the menu
scribbled on a little chalkboard. Beef
burger with fries, sausage, fisherman's
pie. Thank God for food, I thought.

I had been in England long enough to
sense that the kitchen of this pub was
not buzzing with trained chefs. There
were few customers and even fewer were
eating. In fact, no one was eating. But
I was starving and I figured I had no
choice but to take my chances. I took
what I thought was the safest route,
ordering a burger with fries and mushy
peas and a beer to wash it down.

I sat down at a table, arranged the
napkin on my lap and sipped my beer. I
had a feeling of well-being that comes
from sitting somewhere warm and dry and
knowing you will soon be fed.

Soon a plate arrived at my table, but
something was not quite right. I
sampled a fry. Clearly it was of the
Ore-Ida frozen-and-microwaved variety,
but it was edible. Next, the mushy peas.
Well, I didn't expect a lot from
the peas so they weren't much of a
disappointment. I picked up the "burger"
and took a bite. The patty was grayish
with brown specks. Its consistency
was that of a shoe pad. The taste was
not of meat, yet it was strangely
familiar. It took me a while to place
it: This was the same burger I'd eaten
in the elementary school cafeteria. For
50 cents, growing 8-year-olds
were subjected to these patties --
seemingly made of soy and meat refuse --
plus a little Styrofoam cup of red Jello
and a carton of chocolate milk. No
wonder I never grew past 5 feet!

Though I was fairly disgusted by my
meal, which was hardly cheap at five
pounds (around $8), I was starving and
intent on finishing it. But several more
bites into the burger, I felt
overwhelmed by emotions. I was alone, in
a foreign country evidently populated by
barbarians. How could anyone in
good conscience charge real legal tender
and with a straight face
serve this refuse to a customer? Have
they ever heard of ground beef? And
these were the days before Mad Cow, so
they had no public health excuse.

What's more, why would anyone open a
restaurant who hasn't the slightest idea
of how to cook? This riddle
irked me during my entire trip. In the
minds of many Brits, it seems, a
restaurant is simply a business, like a
hardware store, with no specialized
knowledge required.

I sat mulling over what lashing words I
would use with the pub
owner. I was incredibly hungry, and yet
the burger was too bad to
eat. My dejection must have been all
over my face as I stared at the flabby
bun, because the pub owner's wife
approached my table.

"Are you all right, darling?" she asked. I
had a list of invectives prepared,
but instead I said, lamely, "The food
here ... it's different."

"I understand completely," she said, not
understanding at all. "I'm from
Ireland and the food's much different
there. I know how you feel right now.
You're just homesick. You're very far
from home." She was extremely kind,
and she went on to explain about her own
homesickness. She talked to me for about
half an hour about how she'd
had to run away from her abusive husband
in Ireland and how much she missed
her home. I listened to her story, asked
questions and tried to make
her feel better. I was glad I hadn't
screamed at her. Clearly she meant
well and would never knowingly try to
poison someone with hideous food. She
just had no idea what a burger was
supposed to be. Plus, talking about her
problems took my mind off the mushy
peas.

For the rest of my trip I developed a
strategy. Though at home I would
enter a McDonald's only on a road trip
-- and even then it wasn't my first
choice -- in England the Golden Arches
became my beacon. It was
often the cheapest and most accessible
meal in town -- certainly winning out
over microwaved jacket potatoes from a
gloomy tea shop. I also started
hoarding Cadbury bars in my backpack and
eating a few for dinner when
desperate. I began to understand why the
British have such problems with
their teeth.

Finally I arrived in London, where I
feasted on Indian food from morning
till night. Glorious, deliriously good
Indian food. Thank you, tikka masala.
Bless you, biriani.

I understand that British food has
vastly improved since I was there, with
the rise of the gastropub and some truly
world-class restaurants in London. But
towns outside London just don't have
much of a restaurant culture. They
possess a practical attitude that says,
"Why should I go to a restaurant when I
have a perfectly good kitchen right
here?" Eating out is something done
while on holiday. Even in London, social
life after work and on weekends often
revolves more around drinking than
eating. If you insist on ordering
expensive pub food with your pint, your
friends might look at you askance and
ask if you're trying to be posh.

Maybe I'll have to go back soon and
check out some of these new restaurants.
This time, though, I think I'll pack an
extra suitcase full of PowerBars.

Emily Wise Miller is a writer and editor living in San Francisco.