Watching TV on the bus 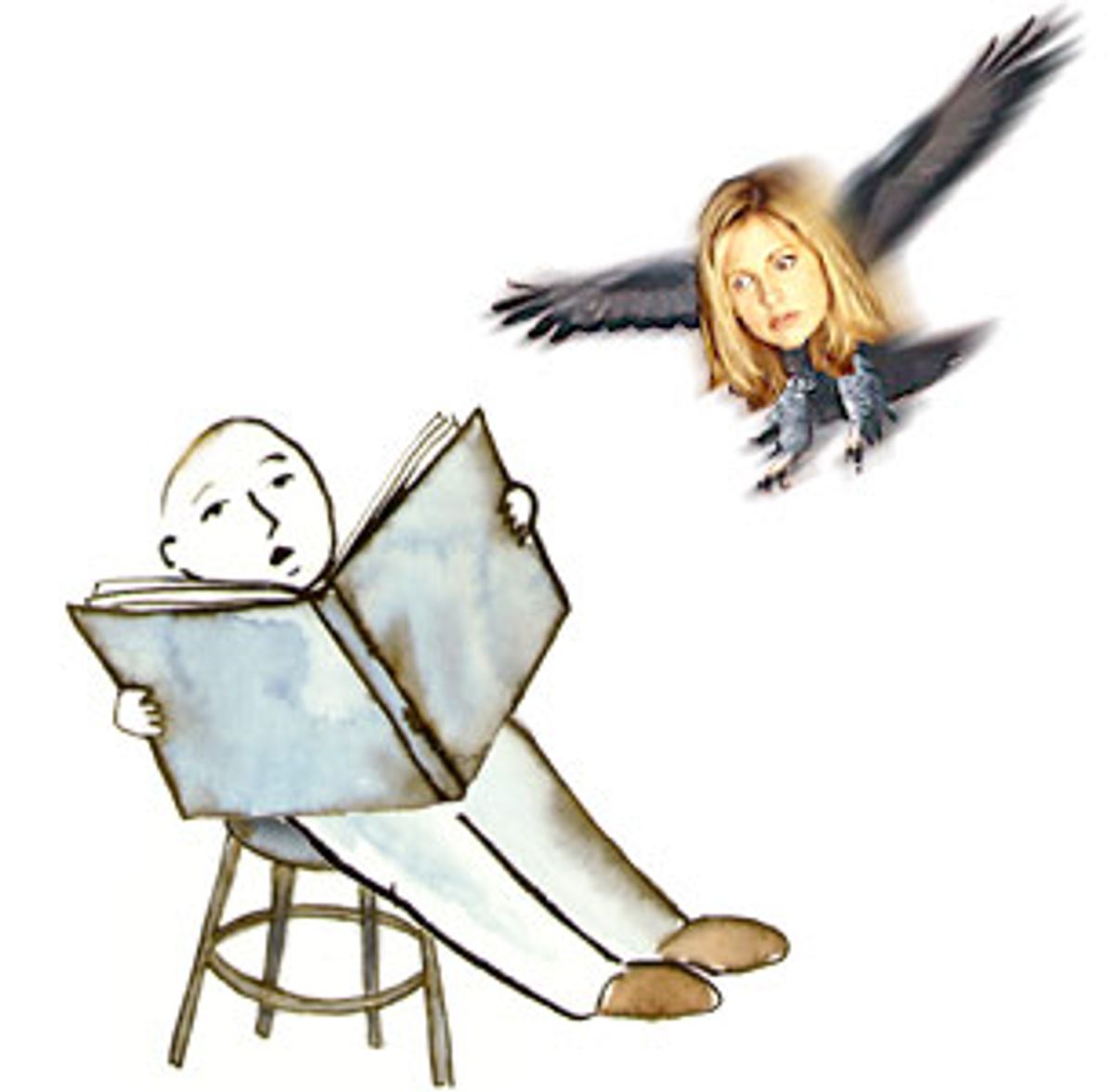 There's nothing like a book about brand-name snacks to turn a kid into a bibliophile.

At least that's the thinking at Simon & Schuster, where the popular "Cheerios Play Book" series has been followed recently by the "Sun-Maid Raisin Play Book." And HarperCollins' HarperFestival division has added "The Pepperidge Farm Goldfish Fun Book" to its preschool roster, while Charlesbridge Publishing (pioneers in the packaged goods literary genre) has contributed the seminal "The M&M's Brand Chocolate Candies Counting Book" to the kindergarten canon.

The trend shows no sign of slowing down, with stories based on Kellogg's Froot Loops, Hershey's Kisses and Barnum's Animal Crackers shooting down the pipeline.

Soon a generation of babies will utter "Nabisco" as their first word, a nasty development that should take some heat off the burgeoning industry in the novelization of teen TV shows. At the moment, Simon & Schuster, HarperCollins and other venerable publishers churn out these "books" at an average rate of six per year. And as hard as it may be to believe, compared with the "Story of Oreos," "Summer" (published by Hyperion and authored by fictitious television neuroteen "Felicity Porter") could pass for "Moby-Dick."

Five of the 13 prime-time programs on the WB network have spawned novelizations, which are all the rage in children's and young adults' publishing. Paperback versions of shows aimed at teens and preteens include, among many others, "Buffy the Vampire Slayer" (26 official novels so far), "Dawson's Creek" (eight) "Charmed" (one, with five on the way), "Clueless" (20), "7th Heaven" (five) and "Sabrina, the Teenage Witch" (30 novels and one magic handbook).

While original works of fiction must carve out a market for themselves, based-on-TV books are eagerly awaited by a receptive, pre-existing audience. Publishers swing both ways these days -- buying the rights to original characters from television production companies for books and selling to television production companies the rights to original book characters -- but the former practice, commonly referred to as "licensing in," is by far the more common.

Teens are addicted to TV (which has increasingly catered to them in the past several years), and publishers are aiming for codependency. According to the Licensing Letter, a newsletter that covers the licensed-product business, retail sales of licensed publishing in the United States and Canada totaled $4.90 billion in 1999, 7 percent of the total earnings for licensed products. This figure represents a 5 percent increase from 1998.

Everybody is jockeying for a piece of the licensing action and publishers are well placed in the greedy fray. In exchange for the "brand extension" and fee they provide production companies, publishers get the benefit of brand recognition from popular television shows. And when a publisher and production company (or network) are owned by the same umbrella company, the revenues stay in the family.

At this point, with the rapid expansion of media companies and the distinctions between their many acquisitions becoming blurred, it takes an MBA to distinguish the various parts of the money machine. Fortunately for those involved, there seems to be no such thing in this region of the economy as conflict of interest.

The Archway Paperbacks imprint, for example, which produces the novelizations of "Clueless" and "Sabrina," is a division of Pocket Books. Pocket Books, which publishes the "Buffy," "Charmed" and "Dawson's Creek" paperbacks, is a division of Simon & Schuster. Simon & Schuster is the publishing arm of Viacom. When Pocket Books sponsored an "Ultimate Clueless Slumber Party" sweepstakes, the UPN network (which airs "Clueless" and also is owned by Viacom) donated $500,000 in free advertising.

The Shannon Doherty vehicle "Charmed" is a production of the Spelling Entertainment Group, which is one of the world's biggest producers of television programming. Spelling's shows make up about 10,000 hours of worldwide programming and -- you guessed it -- Viacom owns about 80 percent of Spelling's common stock.

Executives at Viacom have been quoted as saying that book licensing, while not as enormously lucrative as movies and television, is significant in the support it provides for other properties. Two years ago, the director of product development and licensing for Simon & Schuster's children's publishing, for example, told Publisher's Weekly that he "estimated that about 60 percent of [the Simon Spotlight imprint's] list is based on licenses from the Viacom family, with Nickelodeon accounting for the majority."

Viacom is not unique in this sense. In the same 1998 article, Hope Innelli, V.P. of children's entertainment and editorial director of HarperCollins' HarperActive imprint (both divisions of News Corp.), told Publisher's Weekly, "We wanted to target kids who read a little but are more in the worlds of TV or movies." According to Publisher's Weekly, Innelli "noted that various News Corp. companies were simultaneously increasing their output of children's properties with the launch of a new animation studio, the purchase of the Family Channel, and the alliance with [children's animation] producer Saban."

In fact, the HarperActive imprint was created in 1997 to help bolster HarperCollins' flagging sales through entertainment deals and media tie-ins. (Since then, HarperActive has merged with Harper Entertainment. Juvenile and adult content has been consolidated, says Innelli, "to make it easier for studios to find [us] by going to one place.")

Just as impoverished nobility married "vulgar" new money to maintain a certain standard of living, teen novelizations perpetuate the grand tradition of swapping respectability for dollars. Publishers can cash in on their highbrow reputation as purveyors of literature while earning profits from television.

But reading TV doesn't make it good for you. It doesn't even make it reading. It just makes it watching TV on the bus.

"In its own way, through its own logic, the novel discovered the various dimensions of existence one by one," writes Milan Kundera in his exploration of fiction, "The Art of the Novel."

"With Cervantes, it inquires into the nature of adventure; with Richardson, it begins to examine 'what happens inside,' to unmask the secret life of feelings; with Flaubert, it explores the terra previously incognita of the everyday; with Tolstoy, it focuses on the intrusion of the irrational in human behavior and decisions."

And so, with "Clueless," it inquires into the nature of literary product placement ("It rubbed us the way a Calvin in the irregular bin might"); with "Sabrina," it examines the acquisitively prosaic ("They were out of her price range, but beautiful to look at ... just like the beautiful assortment of 'air-walking' shoes at the next table"); with "7th Heaven," it explores the "terra previously incognita" of the hunky dreamboat ("He quickly ran his hand through his hair ... then he adjusted his broad shoulders inside his leather jacket"); with "Buffy," it explores the outer limits of postmodern "allusion profusion" ("She looked at Giles for some kind of understanding. After all, the only Shakespeare she knew was that rock-and-roll Romeo flick with Leo and the girl who played Angela on 'My So-Called Life.' Well, that, and the one Mel Gibson did").

To be fair, the content of the as-seen-on-TV paperbacks doesn't substantially differ from traditional teenage romance series. I know this because I was, for a brief but harrowing time, a 12-year-old mass-market paperbacks/teen romance junkie. And like an addict, I'd rationalize. "At least I still like to read," I'd tell my parents. But I didn't still like to read; real books were full of orphans and alienation and vexing insights. Teen romance novels were full of cute clothes and puppy love daydreams and were mercifully insight-free.

Yet even mass-market paperbacks will make you flex your imagination, if just a particle. At least they'll make you imagine exactly how cute "Josh" or "Jason" is, or cause you to mentally create a world in which the captain of the school football team asks out his unpopular math tutor after she's treated to a mall makeover by her funky Aunt Judy. In fact, this can be quite intellectually challenging.

But the "Sabrina" books leave nothing to the imagination because every aspect of her world -- her clothes, her funky aunts, the cushions, that disturbing animatronic talking cat, all of it -- has already been imagined and taped for you on a sound stage in Burbank, Calif.

And you can buy her clothes, her soundtrack and her room decorations; and then you can buy all of the novelizations, crawl into her frothy, airy little mind and plumb the void. You can immerse yourself in the brand until it makes your life pale by comparison, until it makes you loathe yourself and your paltry, private, themeless existence.