Only by immersing our children in marketing can we teach them to choose. 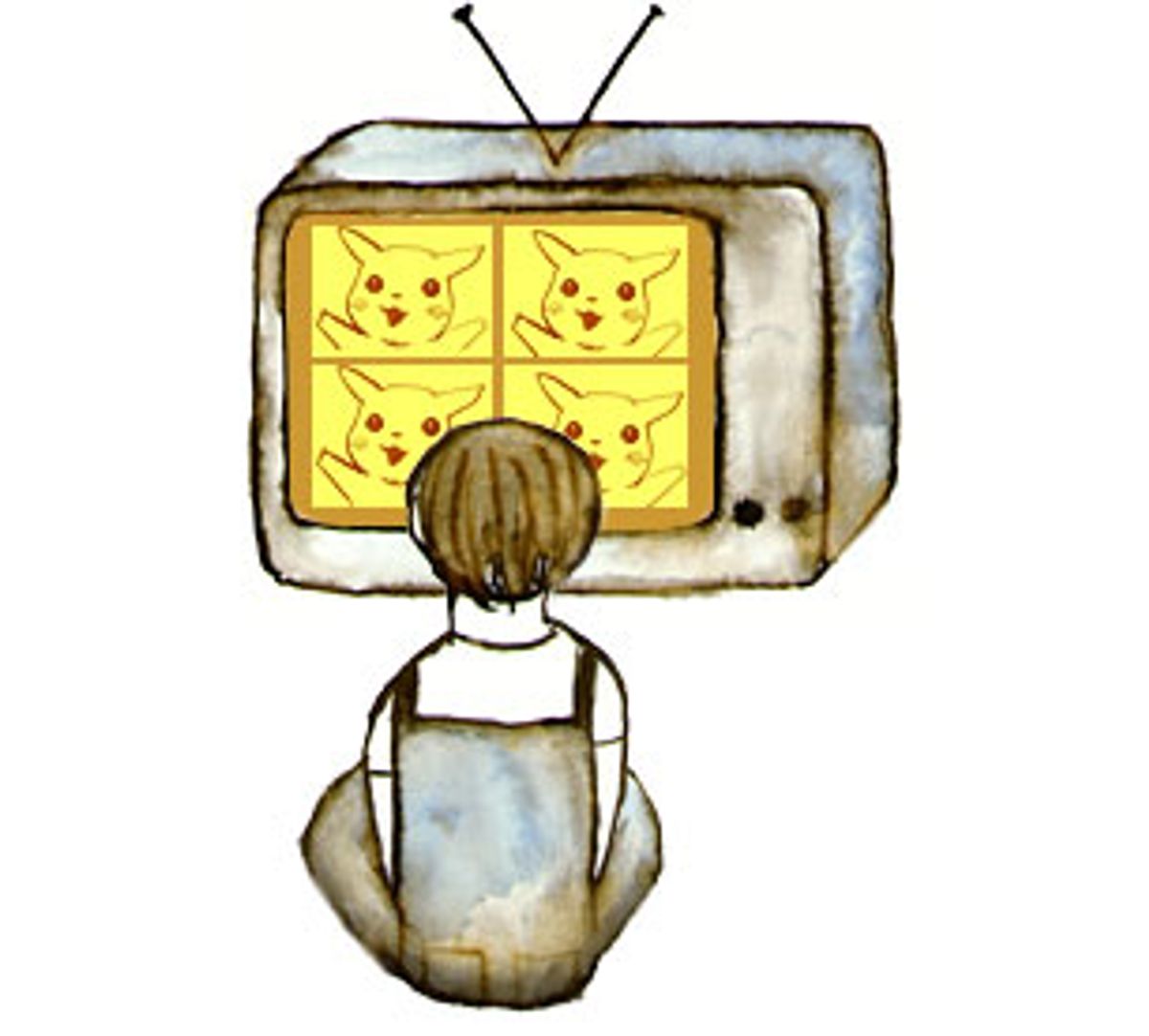 It's Saturday morning, but I'm making my 6-year-old son Jack go to school. Not to an "enrichment program," or a music lesson, or any of the other "supplemental learning environments" so coveted by anxious parents desperate to give their kids an edge on the Jones brats next door and those little Smith bastards down the street.

Funny thing is, Jack doesn't even know class is in session. That's because this pedagogical exercise is taking place right in our family room, smack dab in front of that universally acknowledged incubator of bad posture, bad attitude and every other social pathology known to all advanced human societies: the TV.

Today's lesson plan involves "Pokimon", the massively popular -- and totally inscrutable to adults -- cartoon series about 150-plus different species of "pocket monsters" who beat the living hell out of one another at the behest of their humanoid "trainers" (who repay such loyalty by stuffing the creatures into tiny containers called pokiballs). "Pokimon" is precisely the sort of fare that makes consumer activists howl about capitalism's insatiable need for new markets and the vanishing line between programming and commercials.

Such criticism, however accurate, is almost wholly beside the point. This is the world we and our children live in, and if it isn't cartoon monsters being wagged in our faces while being told to Buy! Buy! Buy! then it is something else -- whiter teeth, say, or an Ivy League degree, or flatter abs, or the moral satisfaction of pledging $100 to PBS and receiving an emblazoned tote bag.

This is hardly as dire as it sounds. As James B. Twitchell puts it in his recent book, "Lead Us Into Temptation: The Triumph of Materialism," "Consumerism is not forced on us. It is not against our better judgment. It is ... our better judgment. We are powerfully attracted to the world of goods." Twitchell suggests "we call them goods, not bads" for the simple reason that, at rock bottom, we like them.

To be sure, "Pokimon" is an unapologetic, nonstop pitch for an ever-expanding universe of toys, video games, action figures, backpacks, branded candy, clothing, you name it. When the first Pokimon condoms and cigarettes show up a few years down the road, no one will even think to bat an eye. The series' tag line -- "Gotta catch 'em all!" -- is a none-too-subtle directive to consume early and often, and that command is reiterated throughout the show's ear-splitting theme song ("Pokimon!/Gotta catch 'em all/It's you and me/I know it's our destiny ...").

Just to make sure the kids don't forget any of the individual types of Pokimon they might want to hector their parent to buy in one form or another, most episodes conclude with a hip-hop chant that names each and every variety available, from the "psychic" Pokimon Abra, straight on through to the "ghost" Pokimon Zubat. If you've yet to experience it, consider yourself lucky. Trust me, it's a rap far more obscene than anything 2 Live Crew ever performed in concert.

So what am I possibly hoping to teach my child by exposing him to such shameless -- and insistent -- shilling? Only this: How to choose wisely in a world of rapidly proliferating choices.

As economists W. Michael Cox and Richard Alm documented for the Dallas Federal Reserve in 1998, between the early '70s and the end of the century, there has been a magnificent profusion of consumer goods from which to choose. These range from the trivial (there are almost 30 varieties of Pop-Tarts on your grocer's shelves, up from three in the early '70s) to the more important (we can choose among some 140 over-the-counter pain relievers, up from 20).

Although Cox and Alm don't go into it, the proliferation of choices goes far beyond basic issues of economics and consumption -- it extends into questions of personal and group identity, where Harvard Business School sociologist Grant McCracken has observed what he terms "plenitude," or the "quickening speciation" of social groups, gender types and lifestyles (shades of "Pokimon").

"Where once there was simplicity and limitation ... there is now social difference, and that difference proliferates into ever more diversity, variety, heterogeneity," writes McCracken in 1997's "Plenitude." "Teens, for example, were once understood in terms of those who were cool and those who were not. But in a guided tour of a mall life a few years ago, I had 15 types of teen lifestyle pointed out to me, including heavy metal rockers, surfer-skaters, B-girls, goths and punks."

There is, then, not only more stuff in the world, but more ways of being in the world. The correlation is not accidental: Through buying in, holding out or negotiating our own terms, we use stuff to create our identities.

But a richer world means an increasing number of choices to be made: How exactly does one pick from the 87 national soft drink brands available, much less between being a goth or a punk, or for that matter, a carpenter or a lawyer? Which in turn requires not a shrinking away from the world -- even and perhaps especially its expansionary commercial sector -- but immersion in it, familiarity with it and an understanding that choosing one thing often precludes choosing another (at least in the short haul).

Stripped to its essentials, of course, this means simply that despite the cornucopia of things and choices around us, we still face that most basic human conundrum: How to square unlimited desires with limited resources? This is a question that wanders far beyond economics and into territory first mapped by existentialist philosophers.

"Choosing determines all human action," wrote the eminent Austrian economist Ludwig von Mises more than 50 years ago, sounding more like Jean-Paul Sartre than Adam Smith. "In making his choice, man chooses not only between various materials and services. All human values are offered for option. All ends and all means, both material and ideal issues, the sublime and the base, the noble and the ignoble, are ranged in a single row and subjected to a decision which picks out one thing and sets aside another."

And so my son and I watch "Pokimon":

"Because they're cool. I like them. This one runs fast, this one is funny and this is a good fighter."

"How much do they cost each?"

"And how much money do you have from doing your chores?"

I look at my son as he furrows his brow and begins to ponder his options.

Nick Gillespie is a Senior Editor at Reason magazine.