Give "Freaks" a chance

Why is NBC keeping its endearing high school comedy in detention? 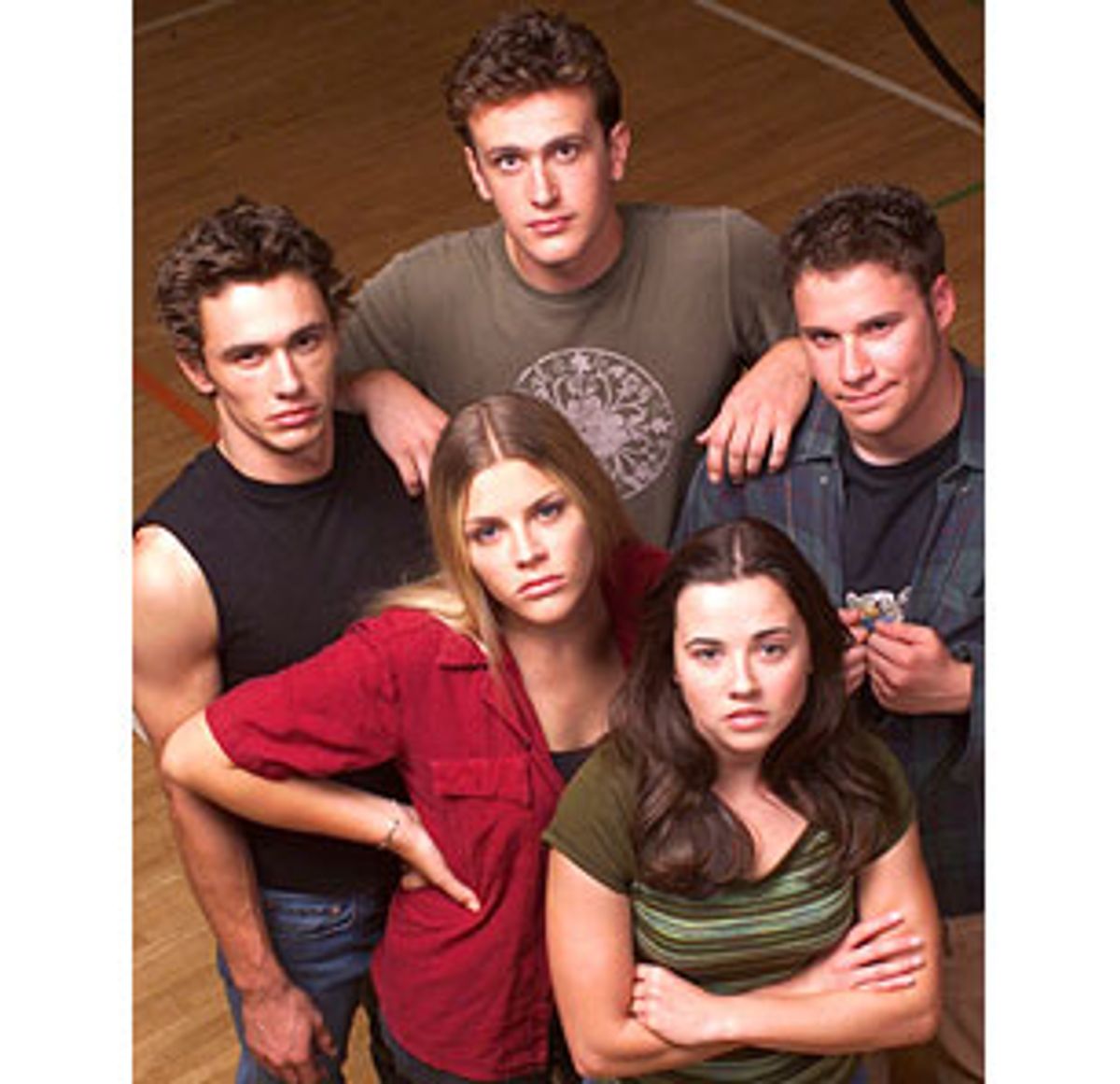 The networks have started (allegedly) freshening their schedules with a bunch of spring replacement shows. But listen to me and listen good: You don't get to watch any of them -- not "Grapevine," not "Titus," not "Wonderland," not "God, the Devil and Bob," not even Malcolm in the frickin' Middle -- until you give the current season's most pathetically unwatched great show a fair shot.

I'm talking about "Freaks and Geeks," which returns to NBC March 13 for what could be its last stand. Watch this transcendent one-hour comedy about high school kids trying to figure out where they fit in and you will experience the painful laughter of recognition. And you will fall in love with the show's motley crew of nerds, stoners, brainiacs and confused souls and you will say, "How come nobody told me this was so awesome?" And I will gently remind you that I (and every other TV critic in the country) have been telling you exactly that since September. You could have listened. But, no.

Created by Judd Apatow and Paul Feig (both were writers for "The Larry Sanders Show"), "Freaks and Geeks" is set in a suburban Michigan high school circa 1980 and focuses on two groups of fringe kids -- the dope-smoking, class-cutting, disco-sucks freaks and the "Star Wars"-crazy, picked-on, hopelessly uncool geeks. If you think you've seen this all before, you haven't.

"Freaks and Geeks" is a voiceover-free zone; there's no wistful "Wonder Years" philosophizing or moony "My So-Called Life" introspection. Nor do the kids mouth slick and dirty Fox-type punch lines or pose like WB pinups. "Freaks and Geeks" is a rare (and probably suicidal) combination of low hype and high IQ. The show revolves around situations that get away from the characters and it's very, very funny. But sometimes it can break your heart, too, like in the episode where one of the freshman geek boys comes to school wearing a ridiculous new jumpsuit and he thinks he looks so cool walking down the corridor, but then he slowly realizes that everyone is laughing at him and his eyes start to register panic.

But what's so special about "Freaks and Geeks" is its understated tone of quiet absurdity and the natural, unforced way its remarkable cast conveys the inner turmoil of the worst, most exhilarating years of their characters' lives. If you haven't been watching, you're going to need to know who these characters are, so here goes. And there will be a pop quiz on this later.

Lindsay Weir (Linda Cardellini) Sophomore Lindsay is at an emotional crossroads. She's bored with being the good little straight-A "mathlete" (she was the star of McKinley High's competitive math team) and wants to walk on the wild side with the freaks. But their lack of ambition and direction scares her. A born rebel, Lindsay hates the idea that her parents have her whole life mapped out for her. And she kind of enjoys it when she hears rumors about how she supposedly "did it" with her freak (ex-)boyfriend, Nick. But she's also been brought up to be kind, hard-working and honest, and old habits die hard.

Daniel Desario (James Franco) Imagine the Fonz crossed with Jordan Catalano from "My So-Called Life." Dumb as a post, but a leather-jacketed fox, Daniel is the source of endless schemes having to do with party crashing and the procurement of beer. They always backfire.

Kim Kelly (Busy Phillips) Daniel Desario's tough girlfriend, from a dysfunctional home. She gives Lindsay a hard time, but she secretly admires her for being so smart and nice. The subject of countless rumors, Kim wears her scarlet "S" (for slut) with (slightly wounded) pride.

Nick Andopolis (Jason Segel) Lindsay's extremely mellow ex. Nick used to be on the basketball team, but was kicked off when he got caught with a bag of dope in his locker. Plays drums in the Freaks' group Creation and worships John Bonham. He wooed Lindsay by sending her a single red rose and inviting her over when his parents were out of town. She assumed he was going to want to have sex; instead, he took the opportunity to pledge his love by serenading her with Styx's "Lady." They never did it.

Ken Miller (Seth Rogan) The deadpan freak with the mutton-chop sideburns and disgusting lack of manners. Ken is known for his vicious sarcasm and his disdain for, well, everyone and everything. Has never had a girlfriend. What a surprise.

Sam Weir (John Daley) Lindsay's younger brother. A freshman, Sam is small and skinny with a bad early-'80s shag hairdo. He loves "Star Wars" and "Saturday Night Live." Recently suffered his first broken heart when cheerleader Cindy Sanders told him she liked him, but only as a friend. Actually, what she said was that she could talk to him about anything because he was like a sister to her, but let's give the poor kid a break. He's still his mom's baby.

Neal Schweiber (Samm Levine) Sam's buddy. Neal is a wisecracking kid who dresses like he's prematurely 40. He comes from a sophisticated upper-middle-class Jewish home; his father is a dentist, his mother plays tennis a lot. A student of comedy, Neal regales his friends with imitations of William Shatner, Sammy Davis Jr. and Bill Murray in "Caddyshack." Finances various geek schemes by dipping into his bar mitzvah money.

Bill Haverchuck (Martin Starr) Amazingly uncoordinated, fascinated with conspiracy theories, his eyes magnified behind snappy aviator glasses, Bill looks like the love child of Gilda Radner's Lisa Loopner and Richard Belzer. He lives with his divorced mom, is allergic to everything and thinks jokes about bodily functions are really funny. He dressed up as the Bionic Woman for Halloween.

To that roster, you can add Lindsay and Sam's grouchy dad Harold ("SCTV" legend Joe Flaherty), their mom Jean (Becky Ann Baker), who yearns for her kids to need her again, and Mr. Rosso (Dave "Gruber" Allen), the hippie guidance counselor who has made it his personal mission to set Lindsay back on the straight and narrow. Laid-back, long-haired Mr. Rosso is an indelible bozo, the archetypical guidance counselor/narc; he's always subjecting Lindsay to his own "Scared Straight" confessions about how he ended up with herpes, or got beat senseless in an alley in Tijuana. In Mr. Rosso's finest hour, he herded Lindsay and her freak pals into his office for a "rap session," punctuating the discussion by pulling out an acoustic guitar and singing Alice Cooper's "Eighteen" with some p.c. lyric additions: "I'm a boy (or girl) and I'm a man (or wo-man) ..."

Lindsay's reactions to Mr. Rosso's lectures are usually halfway between open-mouthed incredulity and unabashed disgust. But you can see why he expends so much energy on her. Lindsay is the most endearingly, believably mixed-up teenage girl on TV. Wrapped in a ratty Army jacket with her brown hair hiding her intelligent, heart-shaped face, Lindsay is trying to find her own way in the world, a place somewhere between her parents' expectations and the dead-end lives she fears her friends are headed for. She usually succeeds and fails at the same time.

In one episode, for example, she's goaded by the freaks into "borrowing" her parents' car for a joyride and then gets into an accident. She feels so guilty when she sees her parents' profound disappointment -- and feels so betrayed when the freaks laugh it all off -- that she cleans up her act and re-joins the math team. But she has nothing in common with her old mathlete friends anymore, and, to confuse matters further, the freaks prove to be good friends after all, showing up at the math meet to cheer her on. Lindsay realizes that she doesn't have to choose between being a freak or a geek; she can just be herself.

But she also realizes that being herself is the hardest path of all, especially when those misleading high school labels -- freak, geek, mathlete, slut -- keep getting in the way. In the show's brilliant opening-credit sequence, set to Joan Jett's shrug of bad-girl defiance "Bad Reputation," the characters take turns sitting for their school photos, but the camera keeps flashing when they're not ready. They're caught off guard. The faces that will appear in their yearbooks are not the faces they wanted to show the world; like those labels, they'll just be one more misrepresentation of their true selves.

And the kids aren't the only ones here whose identities are works in progress; Harold and Jean Weir are having trouble adjusting to their roles as parents of teenagers. Harold's perpetual grimace is like a cartoon thought balloon reading, "What do I do now?" Jean's inability to let go is comical and poignant; in the Halloween episode, she's crushed when Lindsay blows off their annual mother and daughter candy-dispensing ritual to go hang with her friends. But Jean perks up when Sam announces that he still wants to go trick-or-treating even though he's in ninth grade. At least she still has one little bird in the nest! I suppose parental angst is not the sexiest way to sell a show about teenagers, but "Freaks and Geeks" gets it absolutely right.

The broadcast history of "Freaks and Geeks" (chronicled by creators Apatow and Feig on their Web site; they've earned their tone of bitter exasperation) eerily mirrors the social Darwinism of high school itself. When the show premiered in September, NBC stuck it in the geekiest of time slots, Saturday night at 8. Then it was pushed off the air completely by the jocks (NBC was airing baseball playoffs) and the popular kids (November sweeps programming). NBC moved "Freaks and Geeks" to Mondays in January, where the ratings improved, but not enough; it was yanked off the air again after it failed to beat the "Mary and Rhoda" movie in the first week of February sweeps. Hey, that's the way to build an audience! There are eight unaired episodes of "Freaks and Geeks" remaining; the March 13 show is "Garage Door," in which Neal is devastated when Sam uncovers evidence that Dr. Schweiber, the coolest dad they know, is having an affair. If you care even a little bit about this series, let NBC know.

Now for that pop quiz: A.) What's the name of Daniel Desario's girlfriend? B.) How many times did Lindsay have sex with Nick? C.) Who did Bill dress up as for Halloween? D.) Why is NBC always tossing this inventive, sincere, appealing series into detention, but giving empty-headed kiss-ups like "Stark Raving Mad" and "Law & Order: Special Victims Unit" an unlimited hall pass?