Always fall for losers? According to some evolutionary psychiatrists, the brain has little control over choices of the heart. 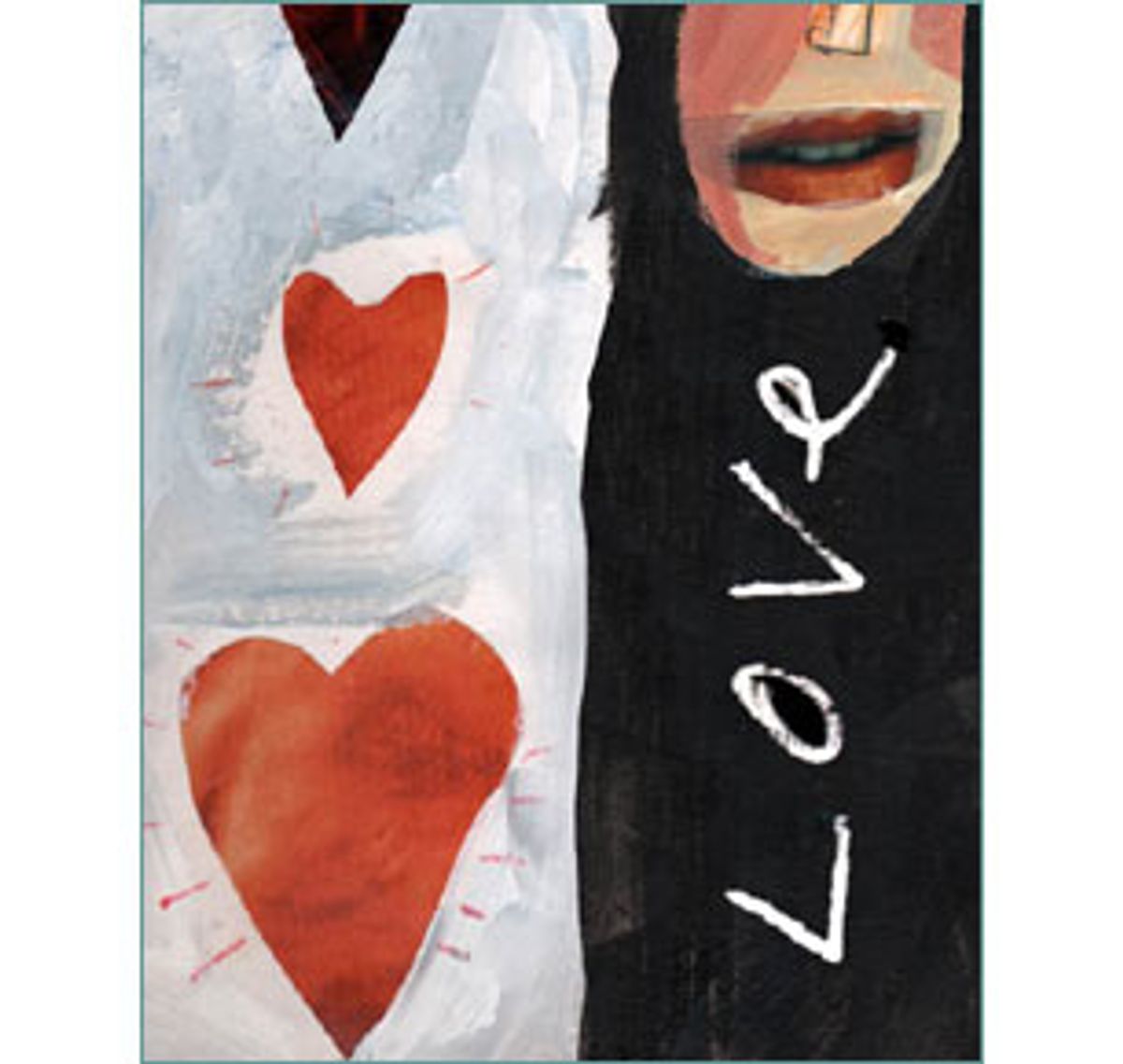 "Love is a bodily process," declare Thomas Lewis and his collaborators, and no, they're not talking about sex. The three psychiatrists (Fari Amini and Richard Lannon are the others) are making the case for "A General Theory of Love," which is, simply stated: Stop thinking so much. Our romance with logic and reason, they contend, has obscured the fact that underneath our cerebral conversation and witty banter, we're still primitive creatures, hungry for the touch of another's skin and the sound of another's heartbeat. Bodies carry on their own love affairs, and the intellect doesn't have much to do with this visceral experience.

Some aspects of this "revolutionary" thesis are already familiar. Freud also located love and its discontents in the body: All those female patients with their odd physical quirks, due always, it turned out, to some kink or twist in love's free expression. But for Freud, the involvement of the body was the symptom, not the cure. That was achieved by nudging the neurosis out of the corporeal and into the abstract, where it could be looked at in the light. Lewis et al., meanwhile, move in the opposite direction: They want to return love to the body, show that it's made from flesh, blood and bone.

Central to their argument is the theory of the "triune brain," which holds that our minds are made up of three parts, each an artifact of a particular era in our evolutionary history. There's the reptilian brain, which keeps our hearts beating and our lungs filling with air. There's the limbic brain, peculiar to mammals, which regulates our relationships with other warm-blooded creatures. And there's the neocortex, in humans the largest of the trio, which allows us to speak, reason and make up theories like this one.

It's the middle, limbic, layer that runs our love lives, the authors assert, and it gets the whole body into the act: heartbeat, temperature, blood pressure, the flow of neurotransmitters, all are righted and steadied by the presence of someone we're close to. And love alters not only these fleeting rhythms, but also the very structure of the brain. Every time we think, say or do something, we beat a path through neural thickets that makes it a little easier to go that way again. In love, especially, we tend to follow the tracks we've made before, and we look for others who inhabit familiar territory. To try to love someone whose mental highways and byways don't intersect with our own -- who sulks when we would argue, who shouts when we would cry -- is to enter an emotional wilderness.

Love makes its mark on us early. In greenest childhood, the brain is busy pruning the lush overgrowth of synapses with which we're born. Though this process is familiar to every ambitious parent (lay down some French verb tenses before it's too late!), it's less often applied to the emotional brain. But the same thing happens here: If a baby doesn't encounter kindness and compassion in her first years of life, she'll be no more conversant in its ways than any other latecomer struggling to master a foreign tongue.

Memory, too, becomes a physical part of us. There's the explicit kind, which records in vivid but fast-fading detail the casual criticism your lover lobbed at you last night. And there's implicit memory, which extracts from those details a general principle -- people who love often hurt you -- and squirrels it away for future reference. In childhood, especially, our implicit memories are engaged in identifying "rules" about how relationships work, and these unconscious rules are the ones we live by as adults.

In all these ways, the authors tell us, love permeates and saturates the body. A pleasing thought, until you consider what it means for those who have absorbed less-than-ideal notions about relationships and romance. They're stuck, it would seem, since the limbic brain is utterly impervious to reason or analysis. There's only one solution, say Thomas, Amini and Lannon: therapy.

Surprise, surprise. All three are practicing psychiatrists, and though they never acknowledge their self-interest in the perpetuation of therapy, it's apparent enough. Helping patients learn how to have healthy relationships "takes vast vistas of time -- three, five years, sometimes more," they note sanguinely. It doesn't much matter what words are said during these scores of sessions, they imply; what's important is that a mysterious process takes place, something they call "revising limbic attractors." What has until now been a vigorous and well-supported argument here softens into mush. "If patient and therapist are to proceed together down a curative path," the authors intone, "they must allow limbic regulation and its companion moon, dependence, to make their revolutionary magic." One can almost hear, thumping in the background, the drumbeats from one of Robert Bly's wooded retreats.

To their credit, Thomas and the others recognize that forces larger than individual experience shape the way we love. But their discussion of cultural impediments to love is also oddly flawed, a random, eccentric collection of diatribes against phenomena as varied as corporate loyalty and the war on drugs. It includes, among other oddities, a five-page rant against children sleeping apart from their parents and a hysterical denunciation of HMOs that likens them to cannibalistic alligators.

The authors endlessly exhort us to spend more time with our spouses and children. That's fine; most of us would like to do just that. But how to handle the intense pressures pushing us in the opposite direction? They offer only smug platitudes, assuring us that if we would "forgo exalted titles, glamorous friends, exotic vacations, washboard abs, designer everything," we might "just get a chance at a decent life."

Most troubling of all is their unspoken political agenda, one that might have been guessed from their enthusiastic endorsement by anti-feminist Danielle Crittenden. Thomas and his co-authors inveigh passionately against day care, and though they occasionally suggest that a "parent" ought to stay home with children, mostly they just say "mother" (and that gender-neutral parent always turns out, a few sentences later, to be a "she"). Quivering with indignation, they declare, "In its baldest tally of values, our culture automatically equates a dedication to full-time parenting with the absence of ambition. But in what human activity could there possibly be more?" Try professor of psychiatry at the University of California-San Francisco, a title held by all three men in addition to demanding schedules of writing and private practice. That's not to discount their point, but to suggest that they pay too little heed to the complexity of women's (and men's) choices.

They conclude with an apocalyptic vision of America's future. "Just as the dinosaur body was built to live within a range of temperature, so the limbic brain chains mammals to a certain emotional climate," the authors maintain. "The giant reptiles vanished when the skies darkened and temperatures fell. Our downfall is equally assured if we push our living conditions beyond the limits our emotional heritage decrees." But are those limits really so rigid? Human beings have thrived precisely because they are so intelligently flexible, able to adapt to "emotional climates" other than the sunny suburban skies over 1950s Levittown.

If their grim conception of what lies ahead is unconvincing, so, ultimately, is their idea of what grown-up relationships ought to look like. The authors would have us surrender to the swampy, symbiotic ways of the limbic brain, and ignore the edgy intrusions of the insistently verbal neocortex. But how do we get to know each other, after all, except through talk? New lovers can't spill their secrets fast enough, and more familiar ones find that their running conversation, years or decades long, becomes the sum of what they share. Anyone who has loved another adult knows the primal, almost infantile comfort that a partner's touch can provide. But they probably also know the pleasures of prickly individualism, of two personalities held just far enough apart to see each other whole -- body and mind.