The art of the spiritual smackdown

Deepak Chopra, the high lama of litigation, may be a pussycat on TV, but cross him in the courtroom and you'll have a tiger on your tail. 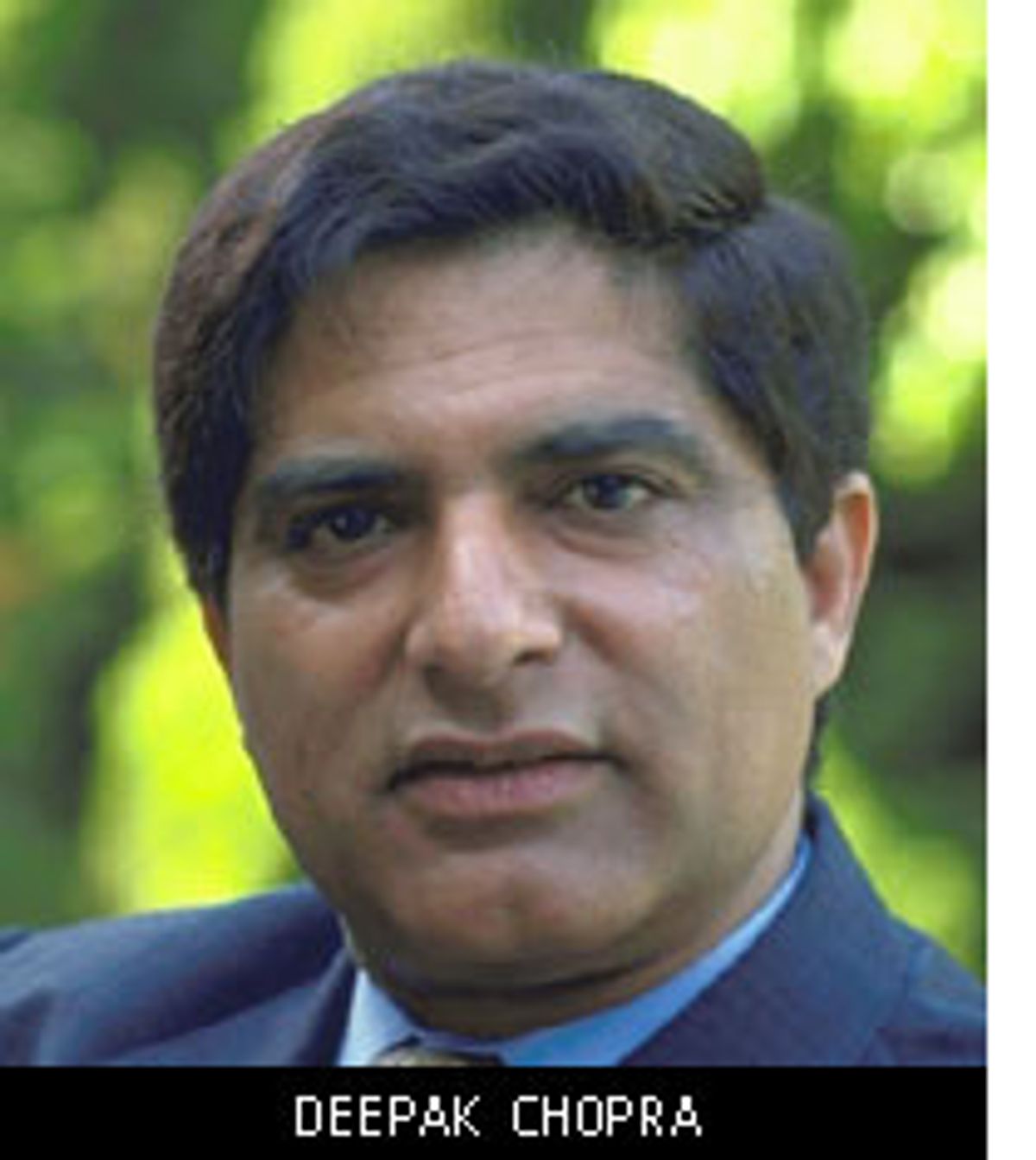 "You know how you find God?" joked New Age guru Deepak Chopra in his deep, resonant voice. "Have a lawsuit with Joyce Weaver."

Chopra was riffing on the title of his recent book "How to Know God" as well as making a catty reference to his tangled, five-year legal battle with Weaver, a former employee of the now-defunct Sharp Center for Mind-Body Medicine in Del Mar, Calif., where Chopra once worked.

The La Jolla-based author has made a name for himself as a spiritual advisor to such notables as Demi Moore, Sharon Stone, Michael Jackson and even President Clinton. But he's also garnered notoriety through his frequent visits to the courtroom.

According to press reports in the London Sunday Times and the San Diego Union-Tribune, Chopra's legal woes started back in 1995 when prostitute Judy Bangert left a message on the voice mail of one of Chopra's colleagues at Sharp, saying that she'd had sex with Chopra.

Weaver, an administrative aide at Sharp, heard the message and taped it. Chopra claims Weaver tried to blackmail him with the information. Weaver then filed a sexual harassment claim against Chopra, which was later dismissed. Ever the lion in the courtroom, Chopra sued Weaver for the alleged blackmail, a case he lost unanimously in January before a San Diego jury.

Undaunted, Chopra vowed to fight on, telling reporters, "Maybe it is my karma to dismantle the corruption in the San Diego judicial system."

Chopra had better luck against the Weekly Standard, the ultra-right-wing rag owned by media titan Rupert Murdoch's News Corp. In July 1996, the Weekly Standard ran a cover story on the prostitute's tales of expensive sexual liaisons with the bestselling author and proponent of alternative medicine.

Chopra, 53, hit the Weekly Standard with a $35 million lawsuit, referring to it as "an act of love" meant to lift the magazine to "a higher state of awareness." In the end, Bangert retracted her claims of sex with Chopra and the Weekly Standard coughed up a $1.6 million settlement, according to Chopra, and an abject apology, which the paper printed in June 1997.

The most recent act in this bizarre legal drama finds Indian-born Chopra defending himself against a suit by Weaver that claims retaliation by Chopra because of Weaver's original sexual harassment claim and wrongful termination from her position at Sharp.

Monday afternoon the San Diego jury returned a unanimous verdict in his favor. Just two days earlier, I spoke with Chopra by phone (he was in Chicago on a promotional book tour). In a candid conversation sprinkled with self-deprecating remarks, he discussed his reputation as a tough-as-nails litigant and his charges of venality in the San Diego legal system, among other matters.

Will this trial be a fair one for you?

I do think so, yes. You know, judges have their own interpretations of certain things and can influence the jury. But we've got a very eminent jurist on this case right now. It's difficult to criticize him really. He has an impeccable record, and I think he's very fair. If I lose, I won't be able to blame anyone.

What was the problem with your previous experiences with the San Diego judiciary?

In any system, but particularly in San Diego, there's a lot of cronyism, power-mongering and influence-peddling. Basically, they all hang at the same club and do each other favors.

Ever since I started speaking out about this, I've gotten thousands of e-mails, faxes and letters from people who've had the same thing happen to them. If you're not a law firm from San Diego, forget it. It's all inside power-mongering.

Why have you fought such a vigorous legal battle with Ms. Weaver?

The easy way out, always, is to give in. Somebody blackmails or attacks you, give in. But it also puts things out there which are not true. I can't do that. I don't know how to surrender to these opportunists who see you in the public eye and try to embarrass you so they can make some money. But I've learned not to have the sense of personal outrage about it. First of all -- it doesn't work. Secondly, it's unhealthy. And thirdly, it brings you down to their level. Unfortunately, it costs a lot more money [not to give in], but you have to do it.

The San Diego Union-Tribune has reported that this legal battle has cost you $1 million, is this true?

More than that, actually. I should have just paid off. (Laughs)

Why do you think Ms. Weaver is suing you?

Well, she's already made money on this. She sued Sharp, Dr. David Simon [Chopra's colleague at Sharp] and me. Sharp and Simon paid her off, because they said it's more expensive to litigate. But you see, they're not in the public eye. If I paid her off, it would make headlines.

It does. But that's part of life. You can't do anything about it. Now, I just want to bring it to a conclusion in a manner that will ultimately reveal the truth. It may not, and I may have to say, "OK, I give up." But to the extent I can do it, I will.

What was your relationship with Ms. Weaver before all this happened?

She worked for Sharp. She used to show slides for me in my lectures. My contact with her was in the first three months of her employment with Sharp. After that, she worked for another year-and-a-half at Sharp. Then there was a general layoff at Sharp. Everyone was laid off and she was one of them.

About the Weekly Standard article and your lawsuit against them: Why do you think they were going after you to begin with?

The Weekly Standard is a conservative, right-wing publication. The editors allowed that story to be published despite being told they were going to be given [opposing] evidence. But after we sued, they retracted. And they paid us $1.6 million. So I made some money there -- and I got the apology.

Are you a Democrat?

Do you think that was part of it too?

Yes. The Weekly Standard has constantly attacked anyone who's liberal. And that was part of the fact that the editors allowed it to happen. Now after the settlement and everything, I have very good relationships with people at News Corp. -- at the highest levels. We might even do business together. This was something that was not at the highest levels of News Corp. It was at the level of the Weekly Standard and down.

Why do conservatives, especially fundamentalist Christians, take offense to you?

You should probably ask them. But Mr. Pat Robertson has done television programs where he's called me Satan. But fundamentalists also fight other Christians who are a little more liberal than them. Their whole thing is fear-based, anyway.

Are you more of a doctor or a spiritual leader?

Neither. Right now I think of myself as a writer who is sharing his ideas in books, lectures and seminars. And there's a big segment of the population who relates to these ideas. But I'm never going to take on leadership. I don't have the slightest desire.

One chapter of your book "The Seven Spiritual Laws of Success" deals with the law of karma. How do you think that karmic law applies here, in this lawsuit?

It's teaching me great lessons. That I should not get upset. That I should be more patient and more humble. That I should learn how to go beyond emotional turbulence. So I think the laws of karma are working as clues and messages of love from some domain, telling me, "Deepak, relax! Take it easy! In 50 years we'll all be dead. It won't matter."

Your public persona is of a gentle, nurturing, spiritual individual, and yet many people regard you as quite litigious and a real barracuda in the courtroom. Is there any conflict there?

I think your primitive, primordial self emerges when you're attacked personally and you know it's a lie. Three days ago when I was in the courtroom, Mr. Friesen (Weaver's lawyer) started to distort what I was saying. So I looked at the judge, and said, "Your honor, he's trying to bully me." And before the judge could say anything, I looked at Friesen and I said, "You're a bully. Do you know that, Bully?" (Laughs) And the judge says, "Strike it. Strike that!" He didn't want the jurors to hear it.

When someone's distorting your testimony because they want to make a million bucks, your survival instincts come out. But generally speaking, I'm not a barracuda, not even in court.

Did you know that there are some journalists who are afraid to write about you, for fear of being sued?

If they've written lies, they've been taken to task. Every time someone has written an outrageous lie in a malicious manner, they've had to retract it. But there has to be malicious intent. Everybody has a right to their interpretation, but when somebody willfully and maliciously lies then I think they have to retract it because otherwise it goes on your record.

You seem to inspire extreme reactions in people -- they either really admire or dislike you. Why is that?

Can I get a comment from you after the verdict?

You can have it now. Either way -- if I lose or if I win -- the comment is going to be the same. And that is, "Everything is as it should be." We can't control the big picture. We can only try.