During a long month of bed rest, days and chefs went by, and I rediscovered the meaning of comfort food. 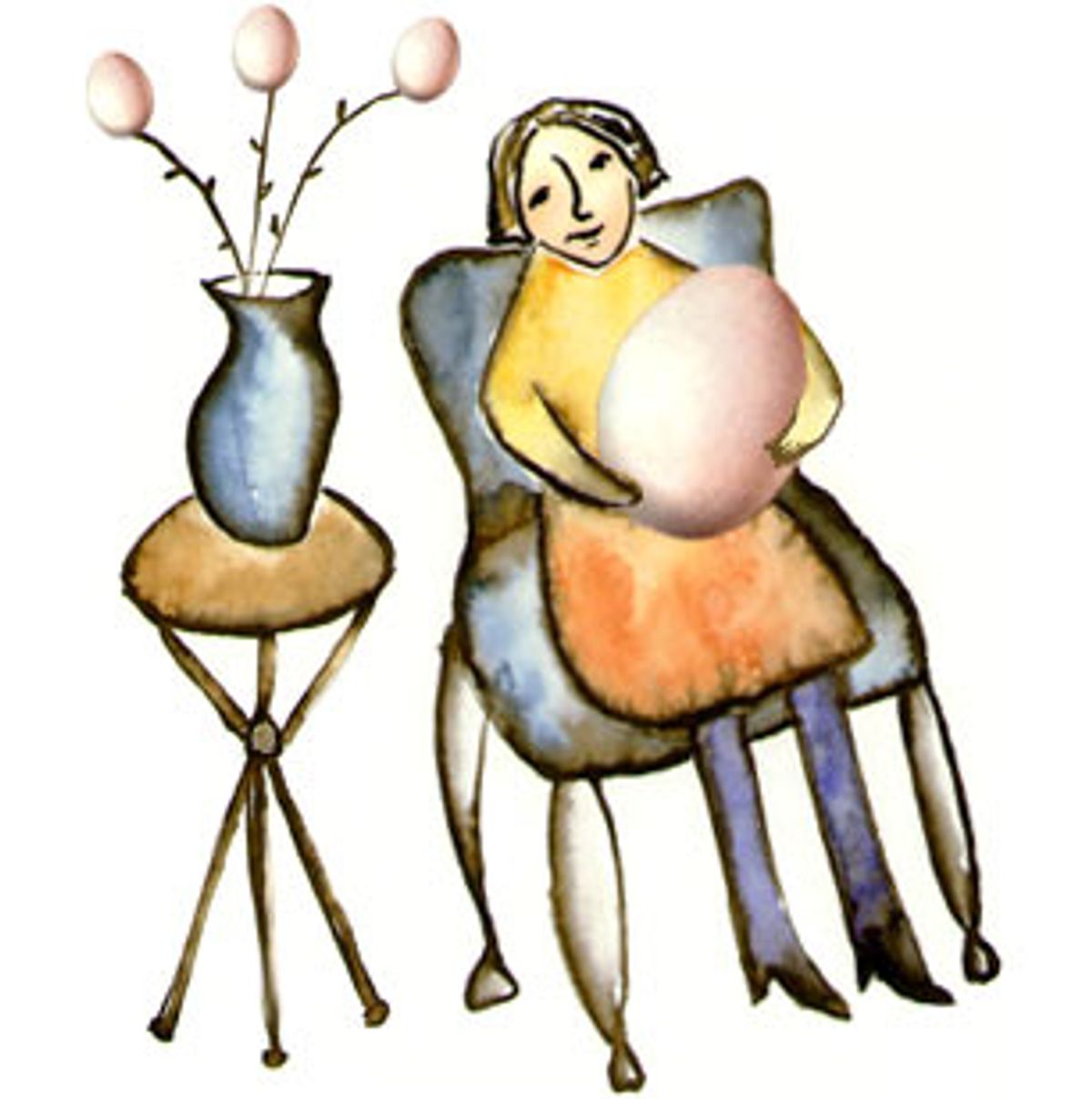 I pulled out my favorite skillet immediately after coming home from the hospital.

For one long month, I'd eaten adequate but uninspired meals as I lay in my hospital bed, trying to keep my unripe baby inside. I had gradually gotten over the insult of having my dinner served at 5 p.m., as if I were a child or nursing-home resident. I even found comfort in warm oatmeal and in safely unseasoned egg-salad sandwiches dipped into tomato soup.

Choosing my meals from the menu distracted me from the monotony of each hospital day. Anti-contraction drugs had reduced my limbs to the consistency of overcooked spaghetti and made my brain too foggy for challenges greater than People magazine. Juicy profiles of the stars and wide-eyed portraits of everyday heroes briefly diverted me, but I always ended up wondering how Madonna, who was also pregnant at the time, would have handled pre-term labor. I jealously imagined her lying between 400-thread-count pima cotton sheets with a personal chef and masseuse catering to her every need. To escape the magazines, I switched to TV.

Soaps and daytime talk shows revealed the worst in people, so I resorted to cooking shows: no emotions, no conflict. I sipped murky, gray-green vegetable soup and watched chefs prepare seared sea bass in a sesame crust, ginger crhme brulie with candied tangerine and lamb sausage-stuffed poblano chilies. For a few minutes, I would almost forget how much I missed my 2-and-a-half-year-old son. I would briefly ignore the constant nervous anticipation of the next round of rhythmic contractions. Days and chefs went by. I grew the longest fingernails I've ever had and developed a craving for exotic flavors.

Every few days my body overpowered the medication and doctors unleashed a daylong course of powerful muscle relaxants into my bloodstream. From eyes to stomach, my body entered a dreamlike state of extreme slow motion. For the next 24 hours, I couldn't eat. I could barely even think. I missed the tinkling diversion of the meal cart and came to depend on orange Popsicles -- cool and sweet.

Shortly after the last dose snaked down long plastic tubing into my arm, the doctors would give me permission to eat again. Despite nausea and exhaustion, I was starving each time and relished my instant appetizer of salty microwaved chicken noodle soup and crisp toast with peanut butter. My husband, happy to have a task, would arrive with my requested main course: one time, good bread with tangy goat cheese and cracked green olives; another, chewy Pad Thai noodles twisted around fat pink shrimp.

After two weeks of this routine, my husband and I gave up our aching hope that I would go home. We were just relieved to make it through another day avoiding birth. Repeated tests could not explain why I persistently went into labor. The monitors showed a healthy baby, development appropriate for 5-and-a-half months. I felt betrayed by my body.

Late one Sunday evening, my reflexes cut through the drug decoy for the final time. We were very lucky. Although he was 11 weeks early, our 3-pound baby boy arrived safely. He was classified a "feeder and grower" and greenhoused in the neonatal intensive care unit.

As soon as I got my land legs back, I returned to my life and my kitchen. Across town, minute amounts of laboriously pumped breast milk dripped constantly through a feeding tube into Alex's tender stomach. My skillet weighed more than he did for the five weeks he remained in the hospital.

I juggled the needs of my older son with those of my tiny new baby in his plastic incubator bubble. While kicking the soccer ball with my rambunctious preschooler, I felt I was neglecting the fragile newborn still in the hospital. During the hours I spent cradling Alex's doll-sized translucent body against my chest, I recalled the wistful look on his older brother's face. Even the coldest mother-in-law would have forgiven me if our family diet had consisted of Chinese takeout and pizza during the period that I wore a path between home and hospital.

But I needed to cook. I dug out my bursting file of recipes -- torn, cut and copied. In the face of my new culinary exuberance, my husband finally stopped teasing me about the boxes of cookbooks and old Gourmet magazines we had shipped across the country three times. I made meals that I had never cooked before. I dared to use new ingredients and flavors I had previously disliked: licorice-scented fennel, yellow and red peppers, alarming amounts of chili powder, woody lemon grass, pungent fish sauce and sweet dusky cardamom. The garbage disposal, I reasoned, could always grind away any failed experiments.

New recipes distracted me; preparing old favorites provided refuge. The morning a nurse reported that Alex had lost weight two days in a row, I made creamy macaroni and cheese. Life might spin out of control but I could still make a white sauce. Ounce by ounce, his weight crept up. When it hit a hefty 4-and-a-half pounds, we brought Alex home and celebrated with a chunky ratatouille of late summer eggplant and tomatoes from the garden.

Finally, I relaxed. I even made an occasional bowl of egg salad for dinner, seasoned with Dijon mustard and finely chopped dill pickle -- best when eaten by the spoonful like I did as a child.

In a quilt of soothing food memories, my ultimate comfort food has always been the egg. When I was sick, my mother cracked soft-boiled eggs into a bowl of buttered toast pieces, which became richly saturated with the yolk. Now, on the evenings when my two boys throw ketchup-soaked fish sticks at each other during the evening witching hour, I sometimes slip a couple of eggs in to boil.

The problem is that they come out right only half the time. It's a delicate balance. I can't eat a soft-boiled egg that is too soft because a runny white makes me gag. But if it's overcooked, the yolk remains stubbornly distinct from the toast. Because I only cook soft-boiled eggs when I'm on the edge, my failure to make them right can send me over.

If I examined my successes and failures scientifically, I think I could develop the perfect method. But, as I learned in the hospital, sometimes even science doesn't have the answer. About half of all premature labor has no obvious medical explanation and responds to no treatment. An egg is not a mass-produced microwave dinner. Each one is unique, born of nature not machinery, and nurturing one successfully requires as much good fortune as science.

Melissa Pasanen is the books editor for Girlzone.com. Her writing has also appeared in The Art of Eating, among other publications.