"A Conspiracy of Paper" by David Liss

A series of murders in the sordid London of 1719 lead a "Philip Marlowe in tights" to the financial giants of the day. 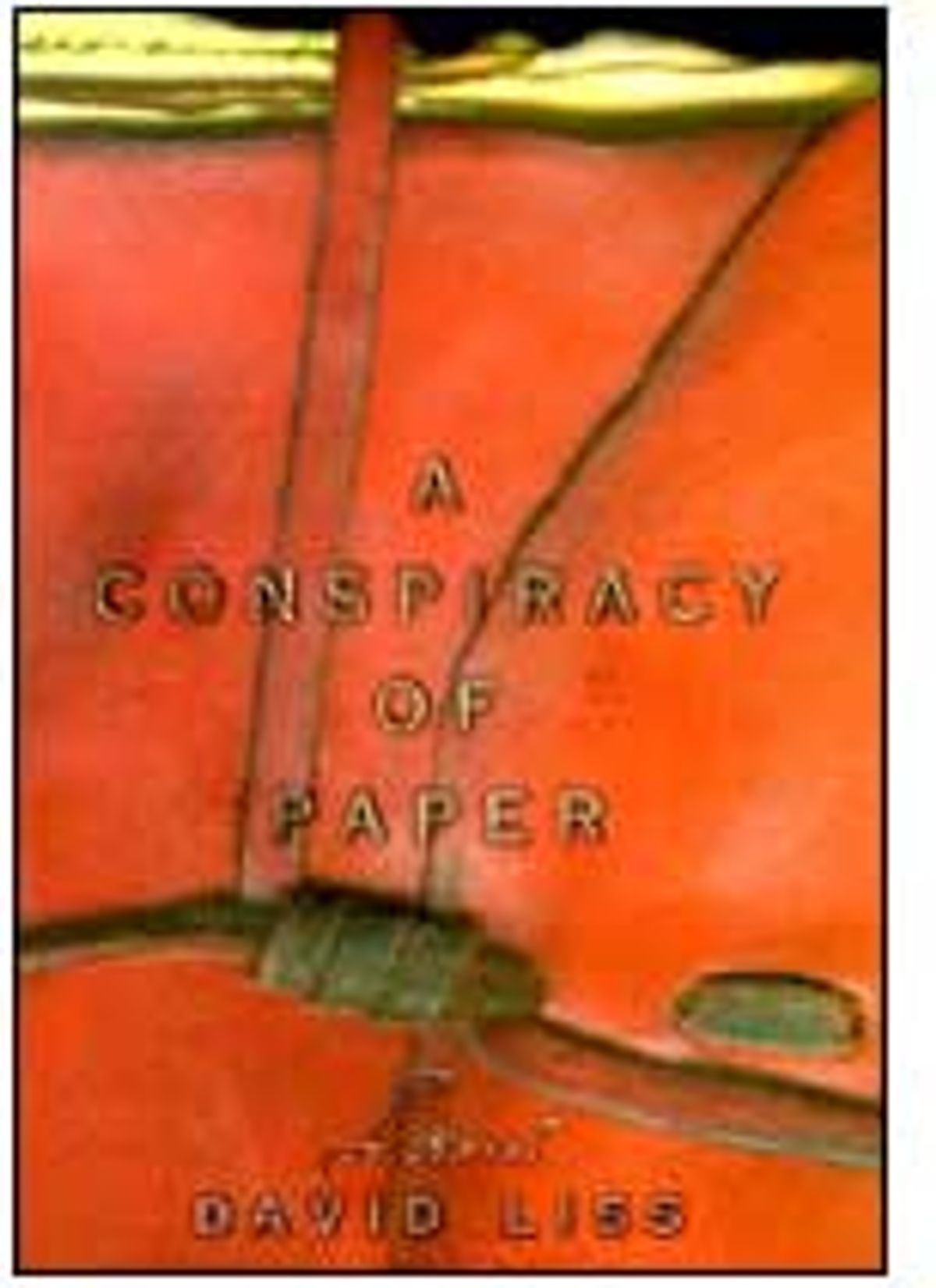 Something about conspiracies seems peculiarly modern, or rather postmodern. Facts elude verification; the search for the truth -- and sometimes you have to wonder if it really is out there -- can recede into little more than a vague nostalgia for a gentler, simpler time before the proliferation of conspiracy-themed Web sites devoted to everything from the death of Princess Diana to elaborate lies about fluoridation.

But of course the orchestrated collective scheme dates back at least as far as Rome. Conspiracy historians cite the Crusades as one early instance of fears erupting over the possibility of a cabal seeking to manipulate its way into power. The notion gained currency again in the wake of the French Revolution, whose opponents portrayed their enemies as seeking to rule the world by devious means. Seventy years before that, another revolution of sorts was occurring in London, and it's here that David Liss situates the conspiracy that fuels his debut novel, "A Conspiracy of Paper."

"The era was one of exuberance as well as turmoil, doom and possibility," Liss writes. "It was a fine time for a man whose livelihood depended on crime and confusion." Early 18th century England (the novel takes place in 1719) was also a time when a new kind of financial order began to flourish, based on stock speculation and credit (as opposed to the established mineral-based economy), which would eventually become the dominant model for the entire industrialized world. Liss conjures a web of deceit involving a series of murders that lead the novel's narrator, Benjamin Weaver (his estranged father, a notorious "stock-jobber," is one of the murder victims), to the murky machinations of the Bank of England and the South Seas Company. "These financial institutions are committed to divesting our money of value and replacing it with promises of value," lectures Weaver's pal and confidant, Elias. "For when they control the promise of value, they control all wealth itself."

It sounds like a great basis for a novel -- and it is. Liss creates a colorful cast, including a real-life figure, Jonathan Wild, the Al Capone of his time, as well as a multifaceted, likable protagonist in Weaver, who is a lapsed Jew, a former pugilist and highwayman and now a "protector, guardian, bailiff, constable-for-hire and thief-taker." (Think of him as a precursor to the modern private detective, a Marlowe in tights.) Unfortunately, however, the novel gets bogged down in formula, explanation and tedious this-is-what-it-all-means conversations between Weaver and Elias, and it never fully lives up to the promise of its premise. Despite the seemingly vast scope, "A Conspiracy of Paper" soon turns into a fairly straightforward mystery offering little surprise and innovation. Worse, the conspiracy at the heart of the book -- which has to do with forged stock certificates -- ultimately isn't all that compelling.

Liss, who is writing his dissertation at Columbia University on how the 18th century British novel shaped the modern idea of personal finance, certainly knows his subject matter, and he does a good job of evoking the seething metropolis. But with the exception of his portrayal of Jewish life there, it's nothing we haven't seen before -- lots of taverns and coffeehouses, dank and dangerous streets, bawdy barmaids and wenches, the appalling conditions of London's infamous Newgate prison, the predictable penchant of those on the lower rungs of society to drop their H's when they speak.

The book is being marketed as a historical thriller along the lines of "The Name of the Rose" and, more recently, "An Instance of the Fingerpost." But Liss, like most novelists who turn to the past for material, doesn't merely employ history for history's sake. "A Conspiracy of Paper" is also intended as a commentary on our own age -- on the volatility of online day trading and overvalued tech stocks and, beyond that, the rampant ambiguity of the contemporary world, which provides such fertile ground for conspiracies. Weaver's musings apply just as much to early 21st century America as they do to London circa 1719: "There were too many connections, too many avenues of villainy. Too many men had too much power and knowledge, but none could be made to answer for their crimes because they hid themselves in endless mazes of deceit and fiction."

The present-day conspiracy theorist couldn't have put it any better. It's just too bad that the plot at the center of "A Conspiracy of Paper" probably wouldn't elicit even a blink from Scully and Mulder.

Andrew Roe has written for the San Francisco Chronicle and other publications.