The Tao of "Seinfeld"

A sitcom that forbade hugging and learning becomes a tool for teaching Aristotle. Not that there's anything wrong with that. 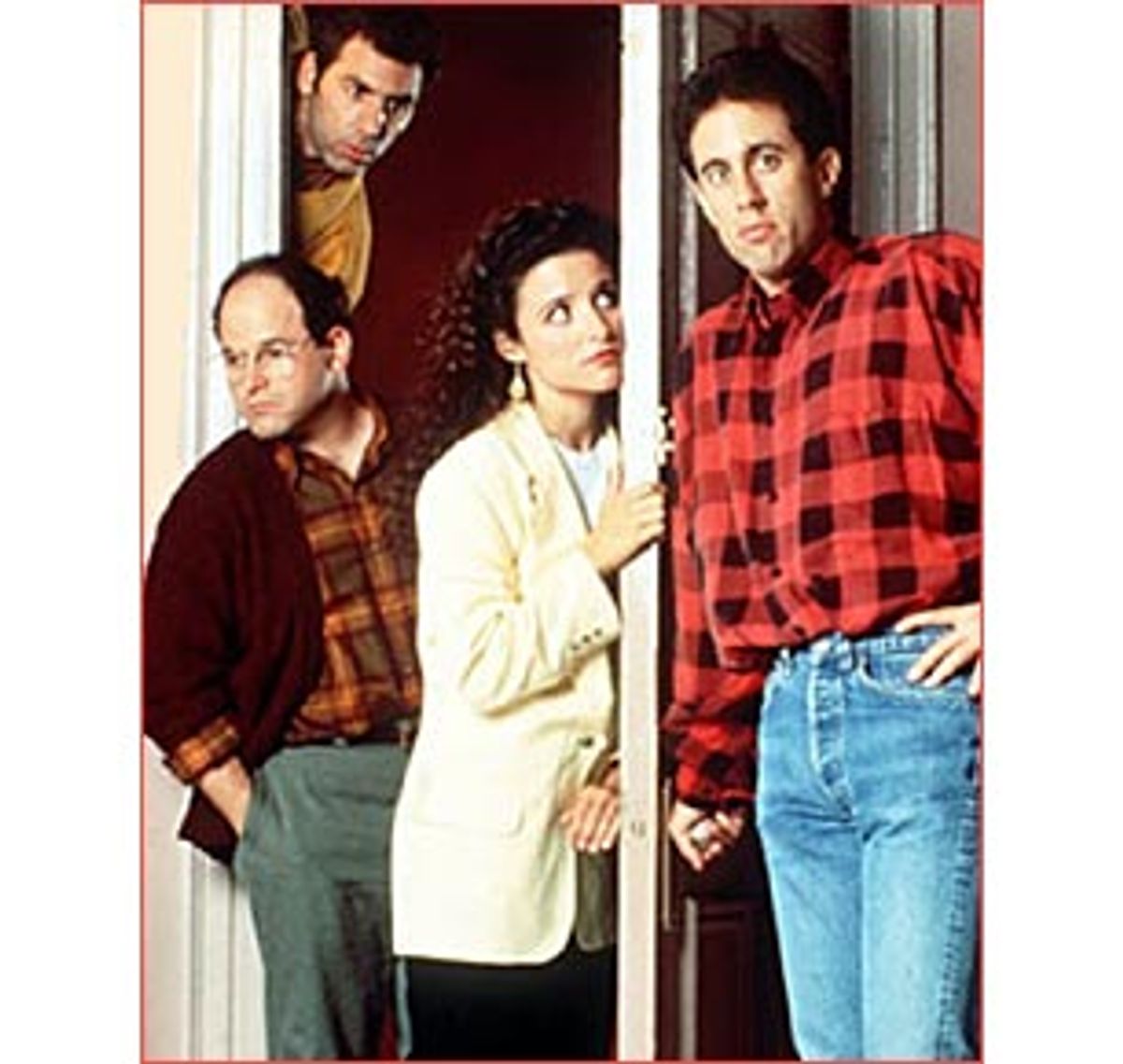 The average American grows up watching four hours of television a day. For thirtysomethings whose parents did not "kill their television sets," "Happy Days" did more than Freud to shape their understanding of family. So is it elitist to say that Freud merits academic attention and "Happy Days" does not? Yes, according to a handful of adjunct philosophy professors weaned on TV, now all grown up and infiltrating the hallowed halls of academia. They are hip, budding professors, not stodgies in wingtips and monocles, as depicted in Merchant Ivory movies. Now they are infusing philosophy lectures with lessons from "Seinfeld;" the irony is that "Seinfeld" writers were guided by two principles: no hugging and no learning.

William Irwin, 29, is a Cuban cigar aficionado, puffy-shirt owner and assistant professor of philosophy at King's College in Pennsylvania who edited "Seinfeld and Philosophy: A Book About Everything and Nothing," published in October 1999. This collection of essays from philosophy professors kills two postmodern problems with one stone: It bridges that irksome gap between sitcoms and existentialist Søren Kierkegaard and masticates 2,000 years of bearded philosophers into contemporary dudes who spout digestible sound bites for today's student. Irwin believes that as Socrates sought to stir the masses, "Seinfeld" can elucidate people because it strips characters to their narcissistic selves. For example, the "Good Samaritan" finale (when the group is charged with failing to help a carjacking victim) shows humanity at its darkest.

Syracuse University professor Robert Thompson founded the Center of the Study of Popular Television after musing, "Why do smart people watch dumb television shows?" "Liberal arts' last great hope is to use TV," says Thompson, who is also president of the Popular Culture Association. "For so many years the traditional methods of teaching the humanities have been losing ground. Television gives students something they can identify with, it's a reference point to access subjects like Kant, Sartre and Heidegger."

But this doesn't mean "An Introduction to Seinfeld" will enter philosophy class descriptions next fall. "Seinfeld" studies is a nascent fad, not a burgeoning discipline. The book was spawned after Irwin noticed that he and his philosophy cronies were all referencing the show in their classrooms. It's composed of essays such as "Wittengenstein and Seinfeld on the commonplace" and "Elaine Benes: Feminist icon or just one of the boys?" It reads like a grown man driving a Miata with the top down, chugging a Mountain Dew and singing along with Alanis Morissette in a shrieking falsetto. The book is funny, unpredictable and well, creepy. The contributors are addicts who tape and chronologically arrange the 169 episodes and converse in "Seinfeld" lexicon like " No soup for you!" or "I'm the master of my domain!"

The text draws parallels between the four main characters and their philosophical counterparts: When George decides that all the decisions he's made in his life have been wrong, so he should do the opposite of his instincts, one writer likens it to the Aristotelian paradigm "of the many." George embodies all the deficiencies of many people rolled into one, the author says, and thus provides an example of the forks in the road one should not take.

At times the analogies get downright futile and an author shoots himself in the foot. In "Kramer and Kierkegaard: Stages on Life's Way," Irwin writes: "Think, for example, of Kramer's boycott of Kenny Rogers Roasters. His motivation is not principled but practical: the glare from the store's neon sign is disturbing him as he tries to sleep. When Jerry switches apartments with him, Kramer yields to Newman's temptation and begins to feast on the tasty bird." His point is that it first appears as if Kramer is flirting with ethics, and Kierkegaard proposed various stages of existence, but the example is lame.

After reading that even the title of the show holds etymological affinity to German existentialist philosopher Martin Heidegger's "Being and Time," one wonders if "Seinfeld and Philosophy" is merely an elaborate gimmick, an attempt to cash in on a sitcom with mass appeal and crass (book) sales potential. What better way to propel one's career than creating a buzz and turning hours wasted in leisure into a dissertation? Like Kenny Kramer (supposedly the real man whom the television character was modeled on), quips on the book jacket, "I just thought the show was funny. Who knew there was so much more involved?" Ironically, Kenny Kramer has been accused of trying to ride the show's coattails all the way to the bank.

Irwin intends the book for a general audience, rather than serious philosophy scholars. "The book is 'Seinfeld and Philosophy,' not 'The Philosphy of Seinfeld,'" the professor has insisted. "I'm not claiming that there's some abstruse philosophy behind the show, just that the two can be linked in some way. I would never recommend 'Seinfeld' over classic philosophy texts. It is just a good pedagogical tool to get students interested in philosophy. I don't take this stuff too seriously. I hope no one takes these essays too seriously." It's in moments like this that Irwin dances like a boxer. He takes enough of a jab to make a marquee name for himself and stir up musty academe dust, but instead of following up with a convincing upper-cut, Irwin sputters, "But I was only kidding!"

It's one way to dodge an opponent. For someone who doesn't take anything seriously, Irwin is as earnest as a missionary. He and the other contributors followed each episode as if it were a Rosetta Stone, seeking dogma in every plot development, facial tick or failed joke, including scenes left on the cutting-room floor. Irwin cries wolf when he advises against earnest interpretations of the "Seinfeld and Philosophy" pieces and criticizes people who would mock the endeavor. "For 2,000 years emerging forms of scholarship have been lambasted," Irwin proclaims. "One hundred years ago, people would have scoffed at scholarly examinations of Charles Dickens since his work was considered pop culture at the time. History will render whether or not [studying "Seinfeld"] is worthy." And "Star Trek" was once just a corny sci-fi show. But just because fans translate "The Illiad" into Klingon lexicon doesn't mean the show had inherent depth.

Irwin's next project is a book about "The Simpsons" and philosophy; University of Virginia literature professor Paul A. Cantor won an award from the American Political Sciences Association for his essay, "The Simpsons: Atomistic Politics and the Nuclear Family." "Seinfeld and Philosophy" joins thousands of other pop television texts now crowding bookstore shelves: "An Analytical Guide to 'Battlestar Galactica'" and "PopLit, PopCult and The X-Files" as well as "A Critical Exploration: 'Planet of the Apes' as American Myth."

"A lot of TV studies are trash," Thompson admits. "A show like 'Gilligan's Island' is not a cultural bellwether," said Gary Edgerton, chairman of the department of communication and theater arts at Old Dominion University in Virginia and editor of the 30-year-old academic "Journal of Popular Film and Television." "But 'Seinfeld' has had a lot to say about urban culture in the '90s. Thompson concurs with Edgerton that "Seinfeld" is indicative of contemporary culture. "If you look carefully, the show speaks volumes about what our culture is all about. 'Seinfeld' tells us more about ourselves in the '90s than the New York Times."

Edgerton and Thompson rally against the cultural elitism that thwarts television studies. "Television is an 800-pound gorilla that shapes and changes us every year," Edgerton said, noting that TV has only been around for 50 years and it took print media many years before it warranted attention from scholars. According to Thompson, "TV studies is a great equalizer." And to think that television used to be an escape from homework.

James Nestor is a freelance writer and MA candiate.