What is the sound of one hand eating a doughnut? Angelenos make a spiritual journey to a jammed Krispy Kreme. 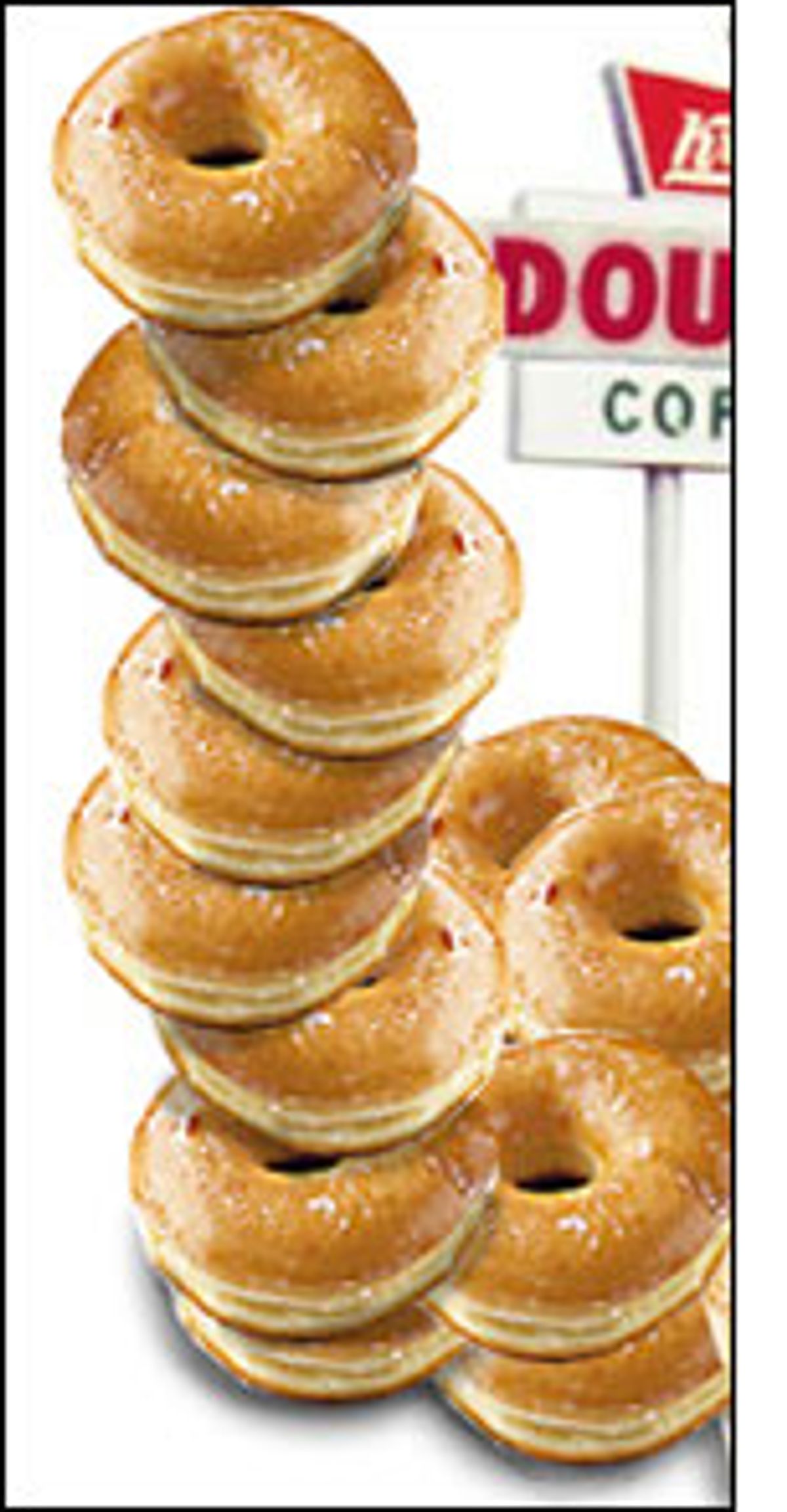 It was an ordinary West Coast garden drama, right out of Sunset magazine: The guests arrived and hit their marks on cue, the standard poolside blocking on a flagstone stage played against a background of blooming lavender, terra cotta and palm trees as the sun slouched into an angry purple scrim of spent hydrocarbons.

Sometime before 11, after the coals had cooled and the police helicopters descended into the L.A. basin to begin trolling in earnest, the party considered a number of after-dinner entertainments. The debate quickly split into two factions: venturesome cosmopolitan nature-lovers advocating a steep hike into the hills for a dance with coyotes (while gingerly sidestepping other semi-feral, leather-clad scrub dwellers exercising more urban libidos) and dipsomaniacal couch-dwellers listing sharply in favor of a downhill expedition to the Tiki Bar of the moment.

Parallel Dimension Girl introduced a surreal alternative: "Or," she bleated, conspiratorially twirling her wine glass, "Or, we could get doughnuts."

I thought this was just a little weird. And not just because I'd just polished off a cornucopia of delicious, low fat, au courant forage, either. I love high-octane confections as much -- no, a lot more, actually -- than the next person. But doughnuts just never appear on my gastronomic radar. Doughnuts, I think: official pastry of the hopeless. Sometimes garishly embalmed in atrocities of colored sugar. Most often seen in the company of bad drip coffee. Definitive emblem of bungling law enforcement.

On the other hand, Parallel Dimension Girl is something of a legend for her unerring cool-hunting and Zeitgeist-homing powers. Over the decade I'd known her, she had been on the very leading edge -- and had occasionally been the wildly inventive perpetrator -- of a number of bona fide pop culture phenomena. If she was saying doughnuts, well, doughnuts.

There are times when the epic conceals itself behind a mundane account: Captain Ahab goes fishing; Madame Bovary shops for a matching handbag; Whitley Strieber is surprised by unexpected guests. And we were just going out for doughnuts.

We piled like teenagers into PDG's sport-ute, and drove. I was still a little shaky on the whole concept, wondering what to expect: retro chic, perhaps; a charmingly lurid little shack staffed by beehived waitresses from a bygone era, propped up defiantly in the center of some forgotten patch of asphalt. Maybe there would be a drive-up window, I thought hopefully. Maybe we wouldn't even have to get out of the car.

What we encountered was more like a major social upheaval, the effects of which could be felt well in advance of arrival; the left-hand turn lane on Van Nuys Boulevard was packed solid for two blocks. We were approaching, we would later learn, a kind of low-intensity doughnut riot. PDG's instincts were on target -- there was, in California, a new hysteria afoot. Doughnut hysteria. And the madness had a name; and the name was Krispy Kreme.

I was, of course, to be informed later that there was nothing particularly new about Krispy Kreme doughnuts. Apparently, Krispy Kreme has for decades been part of the hidden, good-ol'-boy culinary arcana of the deep South, along with other institutions like Waffle House and Piggly Wiggly. The only thing really new about these fat-fried, sugar-glazed cyclopses was their sudden debut in trendier urban climes.

But the appearance of the Krispy Kreme star in the firmament of Southern California fast food was being greeted as the Second Coming. Certainly the police had recognized it as some kind of apocalyptic event; this newly opened Krispy Kreme franchise was causing a traffic jam of near-biblical proportions. No bungling here; the patrolmen stood in the streets like grim blue prophets signifying with ominous, staccato arm movements. Blazing flares and phalanxes of orange cones created a strangely festive, end-of-the-world atmosphere.

We parked blocks away and approached on foot, through streets congested by stalled cars and throngs of doughnut-eaters munching dreamily down the middle of ordinarily perilous intersections that had become parking lots. I was agog; I feared the popular predictions might belatedly be upon us, that the third millennium would precipitate all manner of mass insanity.

My mind raced. What could possibly account for this doughnut-based mania? Some kind of junk food Revelation, one in which the entire population of Southern California suddenly repents of whole grains, tofu and raw vegetables at exactly the same moment? Or millennial fatigue, all of us finally tired of the elaborate, 50-year lifestyle experiment of the "California Experience?" Had the mythology of the Golden State just become too cumbersome to maintain, and had the green and white Krispy Kreme banners come to finally call our macrobiotic bluff? Was it all a high-cholesterol renunciation of our regional cultural pride, a dim and intuited confession that Californians were, after all, normal, and ordinary, with the same lumpy hopes and unholy doughnut desires as their brothers and sisters in less fashionable quarters of the nation?

We took our place in line, which stretched around the shop and into the parking lot. The atmosphere was oddly, unexpectedly convivial. People huddled cheerfully in the darkness, sharing intimacies with absolute strangers, as people will when pressed together by extraordinary events. Soon we, too, found ourselves chatting with fellow travelers on this inexplicable high-calorie hajj: How we had heard about Krispy Kreme; how otherwise thinking people could come to be found so far from home, at midnight on a Saturday, standing in the cold and waiting for doughnuts; what we might order if we ever got inside.

Some of my fellow pilgrims anticipated the flavors of their salvation: chocolate with sprinkles; powdered sugar; old fashioned. PDG demonstrated her gnosis of the subtleties of devotion: "Oh, no, you guys -- you only want to get the glazed, yeast doughnuts, the ones they make fresh all night long." She gave them a look of expert conviction. "The ones that go straight out of the oil, through the syrup and into your mouth," she testified, acting it out with hula hands. The rest were dumbfounded, but convinced. PDG has that effect on people.

This sparked a discussion of the completely automated doughnut assembly line at every Krispy Kreme shop, displayed prominently behind a wall of glass. "It's true!" one believer gushed. "You can see them made! All the way from batter to glaze -- never take your eyes off 'em." Part of the experience, we learned, would be our slow progress past the mechanism as the line approached the cash register. This piqued my curiosity, and clarified the moment somewhat. Here, at least, was some small thing to be genuinely excited about: Doughnut ontogeny.

Another hour in line, and I knew it was true about the doughnut machine. There was something implausibly satisfying about peering through the glass at the languid, inexorable progress of legions of doughnuts in their journey from extrusion to maturity. It was hypnotic; the intricate workings of the device induced fanciful reveries of metaphor. Soon I found myself attributing profound symbolic significance to this pastry passion play, as if I were witnessing the mysteries of some obscure, deep-fried Tibetan bardo:

onto the conveyor of life

Up and down we travel in the rising chamber

gathering strength as the yeast-force builds within us

We descend into a tribulation of boiling oil

We begin to develop our doughy potential

Midway we are flipped, realizing our duality

Those uninverted ones will fail to attain doughnut nature

and be cast into the void

We emerge into the world through a curtain of sugar syrup

Some will go on heroic journeys

Some will never leave the shop

All, in the end, are devoured by gigantic, hungry beasts

The final product does nothing to betray my creation fantasy. There is something vaguely fetal about Krispy Kreme glazed doughnuts. They are warm, spongy, implausibly light. They nestle together in the box like a litter of kittens.


I begin to understand. This excursion was never about doughnuts; we have come to the temple, where the mysteries of creation have been laid bare. Doughnut fate, finally, is the same as ours: We will be placed in a box, there will be a final reckoning, a bell will ring and we will be shoved across the counter into the unknown.

Make mine glazed, please. Fresh ones.