This gorgeous hunk with a limited range became one of the finest and best-loved actors in Hollywood. 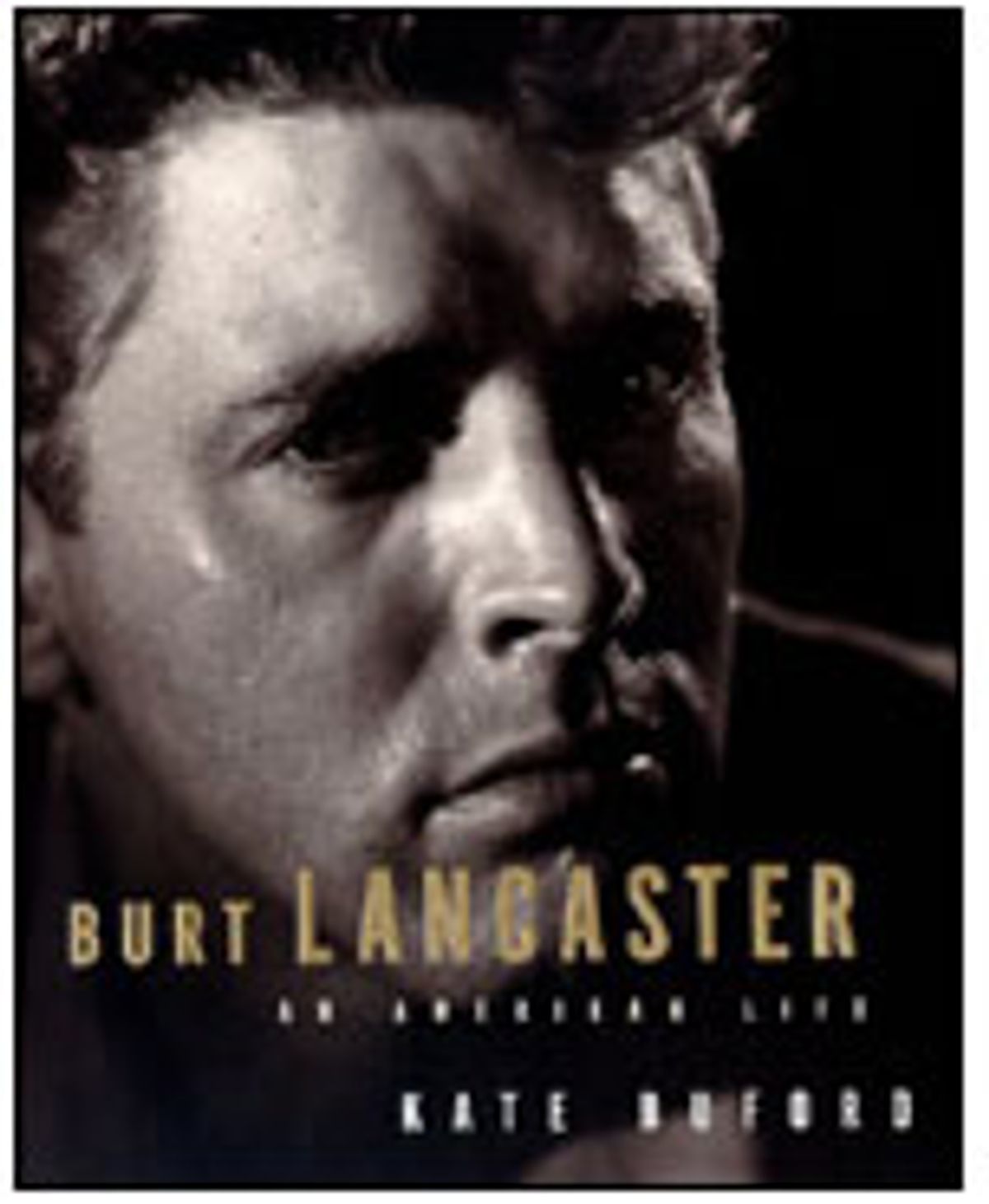 For an actor whose screen debut, the 1946 film noir classic "The Killers," made him an instant star, Burt Lancaster's first few seconds on celluloid are remarkably subdued. He lies motionless in bed, his face in shadow. The brightest light in the shot shines on his T-shirted chest as he learns that two hit men are on their way to rub him out. He's nearly invisible as he passively accepts his fate, his face in shadow until just before he's murdered.

Four decades later, in his last feature film, 1989's "Field of Dreams," Lancaster plays an elderly doctor who has always wanted a time at bat as a professional baseball player. His final scene concludes with him disappearing into a cornfield after achieving his dream. These two evanescent moments bookend a career in which box-office hits like "From Here to Eternity" and "Gunfight at the O.K. Corral" made possible the artistic risks he took in foreign and independent American films such as Luchino Visconti's sumptuous epic "The Leopard" and the acerbic "Sweet Smell of Success."

As Kate Buford points out in her absorbing new biography of the actor, Lancaster, who was born in 1913 and died in 1994, had the makings of a star: broad shoulders, a chiseled face, brilliant blue eyes, defiantly wayward hair and an iconic smile -- much mimicked by impersonators during his heyday -- that he called "The Grin." Though he was a big man, he moved with grace on-screen, thanks to years of touring as a circus acrobat. David O. Selznick, the legendary producer of "Gone With the Wind," had the chance to put him under contract in the mid-1940s but declined. Following the paradigm of Hollywood's golden age, Selznick looked for personality types he could showcase in a series of similar roles, and he'd already signed one ravishing hunk, Guy Madison (a star remembered these days only by fey folk of a certain vintage). Who needed another?

Selznick's rejection was actually a stroke of luck -- one of many -- for Lancaster. He hooked up with Harold Hecht, an agent who accurately gauged the social and economic forces transforming the motion-picture business after World War II. Within a few years, not only had Hecht helped engineer Lancaster's superstardom (Lew Wasserman, the head of MCA, also played a key role), Hecht and Lancaster had become the producers of "Marty," "Trapeze" (Lancaster's homage to his circus days) and other hits. In the 1950s and early 1960s their company was the most successful independent outfit distributing through United Artists.

Lancaster, Buford writes, regarded his star persona, packaged in giddily overplayed roles like the hucksters in "The Rainmaker" and "Elmer Gantry," as "one big commodity." Because he produced many of his films, he could select parts that would expand his craft (he admitted he had a narrow range when he started) and allow him to examine personal and political issues. (He was a lifelong liberal.) Buford's subtitle, "An American Life," reflects her thesis that his best American films chart "the arc of postwar mainstream American life," forming "a coherent story with chapters and themes."

"Atlantic City," one of the most memorable of these chapters, finds the star still growing as an actor late in his career. Lancaster plays Lou Pasco, an aging low-level gangster with delusions of grandeur who becomes infatuated with an oyster shucker (Susan Sarandon) with daydreams of her own. Sarandon, interviewed for the book, recalls Lancaster as at first seeing his character through a pre-feminist prism. It was, she says, "very, very difficult" for him to understand that her character gave herself to his; the actor "saw it as him pretty much taking her clothes off and taking her." (His inability to comprehend the role reversal is surprising given a female friend's reminiscence, earlier in the book, of women chasing after the youthful Lancaster "with mattresses on their backs.") With coaxing from Sarandon, and presumably from the film's director, Louis Malle, the actor turned in a supremely graceful performance -- absent Sarandon's anecdote, I might have called it instinctive -- in which the woman set the tone for the lovemaking.

As for his real-life romantic exploits, Lancaster was generally discreet; the spiciest tidbits in Buford's book, such as his passionate liaison with Shelley Winters, come from others who have written or contributed to tell-all accounts. The actor once said he couldn't imagine anyone writing a biography of him because it might be too boring, and he would have been right had Buford not wisely chosen to focus on his work. The sections about his family life after he became a star border on the tedious -- he philandered, his wife was an alcoholic and his kids had the typical problems of affluent children growing up in the 1950s and 1960s. But Buford keeps these discussions to a minimum.

This well-researched book's only major flaws -- and they're by no means catastrophic -- are the author's tendency to repeat herself, particularly about her subject's beauty, and to overstate her case. To drive home a point about Lancaster's on-screen dynamism, for example, she describes him as never stopping "to lean against anything" in a film until the 1980 "Atlantic City." It's hard to imagine a late-1940s Hollywood director not taking advantage of Lancaster's pinup potential by propping him against some scenery, which indeed happens in two of his first three pictures.

Buford nonetheless succeeds in her primary goal of tracing the relationship between Lancaster's art and his life. Such a connection might seem like a given, but as Sidney Poitier tells her, "When you see substance in an actor's work, it isn't always necessarily there in the unfolding of his personality. In Burt's case, what I saw on the screen ... were the things I became familiar with off the screen." If he's right, Lancaster's films may well constitute the actor's best biography. But Buford's admirable chronicle supplies the back story.

According to Buford, Lancaster probed the important personal and political themes of his life and era through his films. Sometimes he took the position he believed in; at other times he played his own devil's advocate. The following movies, which contain some of his most important performances, also mark key points in his on- and off-camera biography:

The "Citizen Kane" of film noir, which takes off from the story by Ernest Hemingway, recounts the circumstances leading up to the murder of Ole "Swede" Anderson (Lancaster), a lug double-crossed by Ava Gardner and a male confederate in a payroll heist. It was one of several early roles in which the actor played a fool for love.

Yvonne De Carlo double-crosses Lancaster so many times he gets dizzy in this silly but effective noir with a bushel of atmospheric Los Angeles location shots. As an actor he's still inexperienced, but when he flashes his dazzling teeth or gets in the clinch with De Carlo, he's unmistakably a Hollywood star.

Lancaster, as Sgt. Milton Warden, plays with fire in the form of Deborah Kerr, the wife of his commanding officer, in the film version of James Jones' bestselling novel. It's set on the eve of the Japanese invasion of Pearl Harbor, and foamy white waves bathe Kerr and Lancaster as they make love on the beach in one of 1950s cinema's most torrid (and most famous) scenes.

A sneering, leering, swaggering Lancaster bonds with Gary Cooper as they attempt to highjack gold in Robert Aldrich's wry western. The satire had disaster written all over it during production but turned out, deservedly, to be a hit.

Lancaster pays tribute to his days in the circus. As a broken-down trapeze artist, he trains Tony Curtis in a difficult routine. A '50s-style misogyny infuses this film, in which a woman (Gina Lollobrigida) comes between the two male stars.

They don't come any meaner than J.J. Hunsecker, a gossip columnist who preys on publicist Tony Curtis' lust for fame and money. Lancaster's company produced "Sweet Smell," a bomb when it was released but now considered a classic.

Lancaster won a best-actor Oscar for his performance as Sinclair Lewis' jive-talking religious revivalist. He's a little over the top, but the film still packs a mild punch as a cautionary tale about cynics who manipulate people's religious faith to make a buck.

This film about a convict who becomes an expert on birds, writes Buford, is "Lancaster's great expression of hope and freedom of the spirit, his secular bow to the Christian idea of redemption he had been brought up with."

Lancaster plays the aristocratic Prince Salina in Luchino Visconti's pageant about the unification of Italy. Part history, part timeless visual poetry, this is one of the finest postwar Italian films. The actor and director got off to a rocky start as collaborators but eventually came to respect each other greatly.

Middle-aged and conflicted, Lancaster swims home via his New England neighbors' swimming pools in a de facto prequel to "The Ice Storm," based on a John Cheever story. Cheever wrote of Lancaster, "He's very sexy and commanding in the girl scenes but half the time he looks as if he were going to cry which is just right for the part."

Lancaster portrays an experienced scout who advises a greenhorn cavalry leader on a mission to capture a bloodthirsty Apache chief, in a western that contemplated America's past to shed light on the Vietnam War, then still in progress.

This subtle, troubling drama, set just before the mid-1960s troop buildup began, is among the best Vietnam War pictures ever made. The subject is how America got into Vietnam; this time Lancaster plays a world-weary military advisor. As in "Ulzana's Raid," blind imperialism and an inability to perceive the world on any but American terms doom a small, isolated combat force.

Lancaster was never more endearing than in Malle's film about an aging, two-bit gangster who gets involved in a drug caper and falls for Sarandon. He's so superb as a man desperate to believe in a past he was too ineffectual to make happen that he's convincing even when he recites lines as preposterous as "The Atlantic Ocean was something then. Yeah, you should have seen the Atlantic Ocean in those days."

Daniel Mangin is a writer and editor living in New York.