A conversation with the man the rattlesnakes love to sink their teeth into. 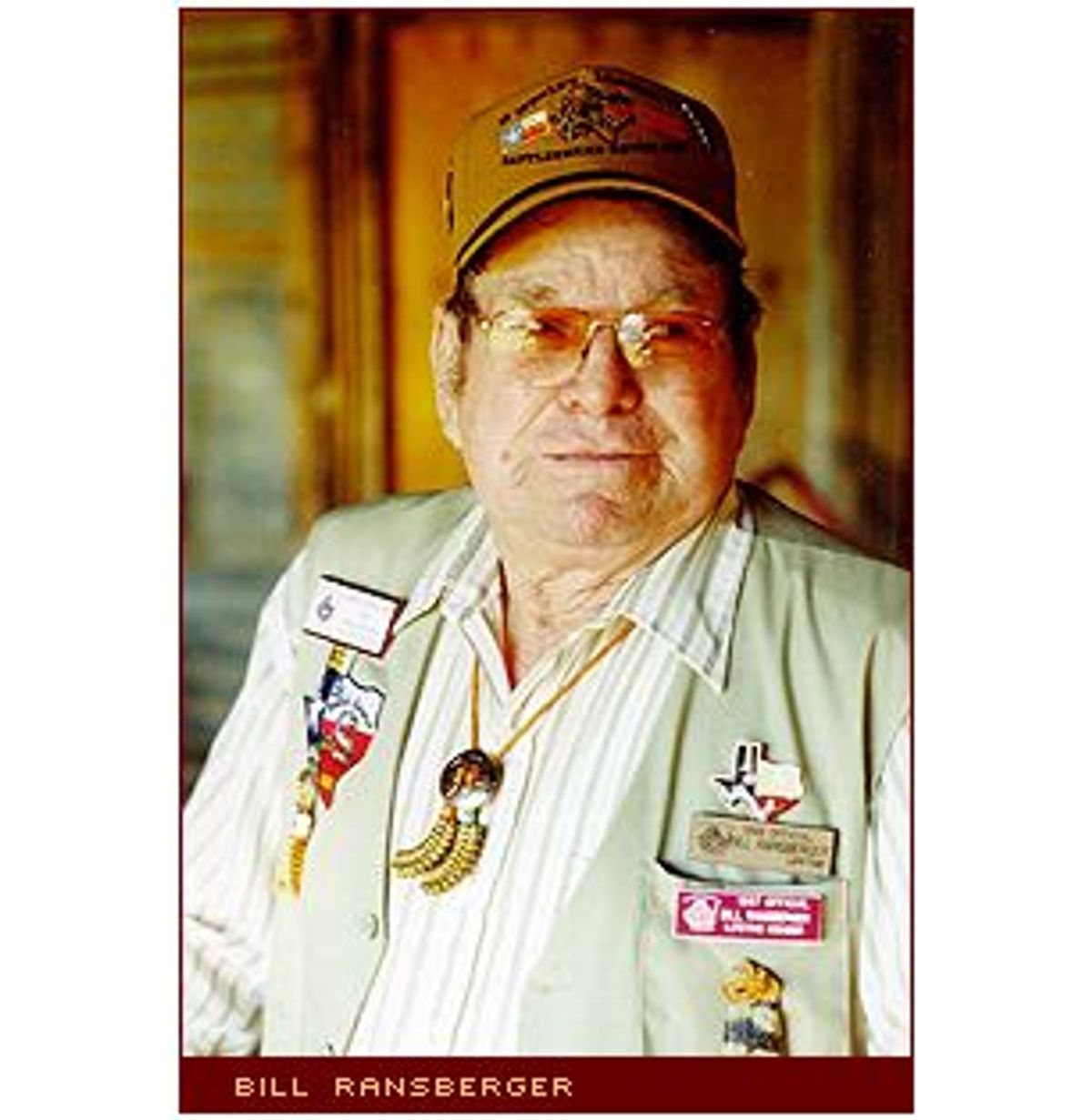 Bill Ransberger of Sweetwater, Texas, is famous for being bitten 42 times by rattlesnakes and living to tell about it. His friends call him Snakeburger.

This weekend -- as it does this time every year -- the small town of Sweetwater erupts at the seams as thousands flock to its "World's Largest Rattlesnake Round-Up." While the rest of the state considers rattlesnakes a pest, the citizens of Sweetwater drop everything and throw an annual party for the venomous creature that's been helping to put their town on the map since 1958.

Ransberger, 77, helped start many of the rattlesnake roundups in Texas, and for over 30 years he's been famous for his snake-handling techniques and demonstrations.

The thousands of pounds of live rattlesnakes for the roundup are provided by local ranchers and farmers, who catch them when the weather turns warm, and who consider them a threat to their livestock. The roundup features professional snake-handling demonstrations, guided snake hunts, booths where venom is milked and donated for medical research, a Miss Snakecharmer beauty pageant and, of course, fried rattlesnake meat.

The event also draws protests from animal rights organizations, which oppose the treatment and killing of the snakes. Some claim the venom milking is for spectator purposes only, yet roundup organizers counter that it benefits the fields of cancer- and stroke-prevention research.

Though Ransberger retired as the roundup's organizer three years ago, he still keeps his hand in -- devoting his time to educating people on the proper handling of poisonous snakes in the field.

How long have you been involved with the roundups?

I started doing the roundups back in 1958. Helped start 'em in Sweetwater, San Angelo, Big Spring and Andrews.

How'd you become so skilled at handling poisonous snakes?

Back then there wasn't anybody who wanted to touch snakes. I had to teach myself how to handle 'em. Back 30-40 years ago you'd have about 300 people die in one year from rattlesnakes. It ain't that way anymore. Of course, back then everyone had their own personal remedies on how to treat a bite.

When were you first bitten by a rattlesnake?

I was first bitten in 1962; I'd just started a roundup in Big Spring. I was nervous and didn't know anything. I knew the books said a snake wouldn't jump and bite over 12 inches. This one jumped 14. Guess that snake didn't read the book. About the time you think you got a rattler figured out, they've bitten you. 1970 was my worst year. I got bit four times.

And when was the last time?

I was bitten as recently as five months ago, got me on the finger while [I was] teaching some oilfield workers how to handle snakes. Luckily my wife was there in time with the extractor and was able to get out all the venom. About the last 30 times I've been bitten, it's been my wife who's practically saved me. She's very supportive of what I do.

What does it feel like to be bitten by a rattlesnake?

You ever slammed your finger real hard with a hammer? Multiply that by 10. When they bite, the entire area around it burns like you just put a cigarette out on yourself. That's how you know you've been bitten by a poisonous snake.

Every time your heart beats after that, the venom tears up any tissue it touches. Nowadays, they'll keep you conscious with ammonia and save you with the extractor. You just gotta keep telling yourself, "I'm not gonna die."

How do you treat snakebites?

Back 20-30 years ago all we had was a Johnson & Johnson suction cup that came in your first-aid kits. A lot of us cut X's across the fang mark, applied a constriction band above it and applied suction with either our mouth or the cup. Then you tried to stop the bleeding from where you'd just cut yourself.

Now we have the Sawyer first-aid kit with an extractor. It's a little pump that costs about $12.50. You apply that to the bite, push a little plunger and it creates a vacuum and sucks the venom out. The French invented it for bee stings in their vineyards.

When I was raised, if you got bit, you might as well go ahead and dig a hole 'cause you were a dead man.

What happens after a rattlesnake bites?

After a snake bites, you'll start swelling up really good. That's how you can tell if you've suffered a severe bite. After 48 hours, maybe the third day, you'll get sick to your stomach and start vomiting. Throughout this time, the pain is tremendous because venom is constantly eating away at your body. Then after about seven days, the process will either reverse itself or kill you. But by then, you should've gotten yourself to a doctor.

The biggest snake that ever bit me was 5 feet long. Let me tell you, that'll put you down for a while. Baby snakes are more poisonous, but a momma can discharge a lot more venom. That goes for all females. You put two snakes on a table, the first to strike is always the female. It's the same with all species, humans too.

Have the bites had any long-term effect on your body?

I have a lot of scars that look like small holes. Then there's the big scar on my arm [from when doctors had to butterfly the skin to scrape away dead tissue]. Two fingers are bent from venom eating away at the tissue. Most of the scars are on my arms, legs and hands.

Have you been bitten in any unusual places?

I've never sat down on one, if that's what you're asking. You sit down on a rattlesnake and you'll find out real fast who your true friends are.

How close have you been to death?

I was in the hospital once for 10 days. I nearly lost my leg. I've been in severe shock three times. About five years ago, I nearly lost my finger from a bite. They had to open my entire arm and stuff it with gauze.

I hear you have more than one nickname.

They call me Bill Snakeburger, that's the most common. When I was an engineer on the Santa Fe Railroad, my nickname was "Rattleburger." Back then, we'd get over 2,000 pounds of snakes in just 20 miles of track.

What are some good safety tips when encountering a rattlesnake?

When you see a rattlesnake, the only thing you can do to keep from getting bit is don't move. They'll back away from you. They never rattle before they strike. Just locate 'em and stand still, then start backing away very easily. They'll only strike the fast moving.

Since you retired, how do you keep involved with snakes?

My goal in life as a civic-minded person is to change people's perceptions about rattlesnakes and help them to respect the animal. I train people year-round on how to handle snakes so they won't have to go through the pain like I did. I'm constantly doing demonstrations for Boy Scout groups and oilfield workers. I keep about 100 snakes in a box out in the shed at all times.

Bryan Mealer is a native of West Texas where he grew up attending round-ups in Sweetwater and Big Spring. He lives in New York City and works for Esquire magazine.