By the author of "The Butcher Boy," a collection of stories pitch-black down to their funny Irish toes. 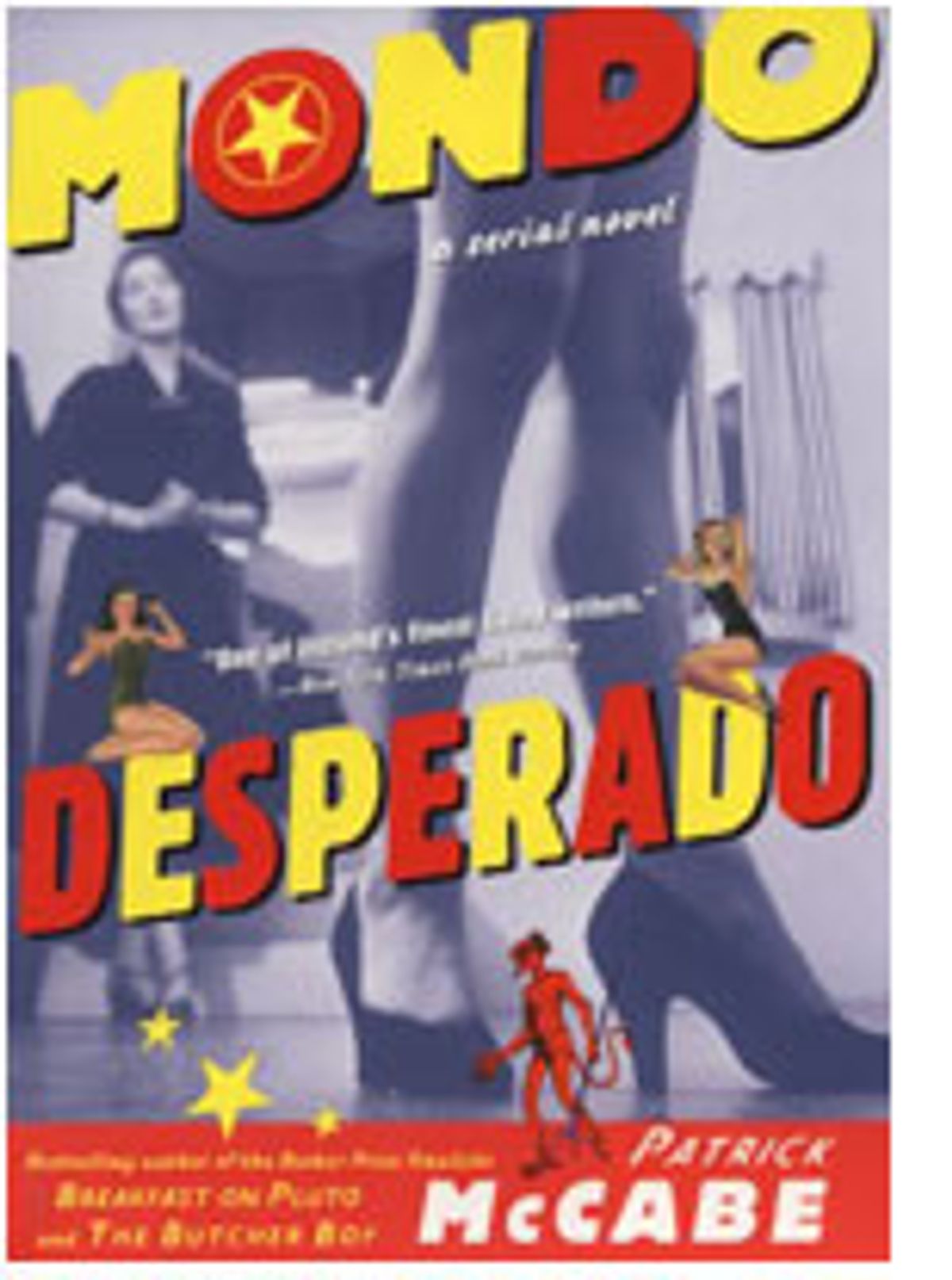 Barntrosna is not a bed-and-breakfast kind of place. Pass McConkey's field and you'll spy sweet-eyed, angelic Declan Coyningham with an air hose inserted "snugly between his sad but acceptant buttocks," inflated from a schoolboy into a "hideous, bladderesque monstrosity." Drop by Shamey Henley's for a pint and you'll run into the socially maladjusted Tom Gully, though the boil on his face will introduce itself to you first, leaning toward you like "some eerie red eye" and winking. A trip to the Barntrosna Arms Hotel is not recommended, but if you have to go, if a dark curiosity compels you, ignore the mad doctor in the corner raving about the creatures, half-human and half-horse, with a smidgen of bird -- bargain-bin Pegasuses born of a science experiment gone horribly wrong -- living in the hills nearby.

You'll need a healthy amount of dark curiosity to get through Patrick McCabe's new collection, "Mondo Desperado," which is almost as punishing as his novel "The Butcher Boy," but without the carving knife. The stories all circle about Barntrosna, a whacked Irish backwater rife with bitter shut-ins, nefarious schoolboys, cheeky prostitutes, closeted-lesbian nurses and more than one boil. But the town is only a backdrop to the Gothic punishments of McCabe's ruthless imagination and pitch-black humor.

Of course, McCabe didn't actually write the book: The man responsible is one Phildy Hackball, a down-market, halfway-blitzed Sherwood Anderson, and his stories are the result of a strict diet of nudie films and American B-movies. This conceit is really just an excuse for McCabe to loosen his style, swear more riotously and toy extra-brutally with the fragile egos of the town's populace. But if the book were straight torture, it'd be torturous to read. McCabe invests profoundly in his characters -- "Mondo Desperado" may be cruel, but it's never cold.

The common psychic state of these characters is delusion. Larry Bunyan, the psychotic husband in "Hot Nights at the Go-Go Lounge," suspects his wife of leading a double life, dancing at the town's new club and sleeping around. He's wrong, but the joke lies in watching him disbelieve her at every turn. (Fortunately, McCabe's greatest gift is brevity: The story is amusing at 13 pages; any longer would make it a chore.) "The Bursted Priest" follows the inflation of poor Declan Coyningham, whose fantasies of priestliness annoy the other boys so much they want him dead. Hey, this is Barntrosna.

The collection succeeds best toward its conclusion. "The Valley of the Flying Jennets," the aforementioned tale with the monsters in the hills, is as good as Edgar Allan Poe ever got, complete with the rambling introduction about whether the reader is prepared to take the horrors the teller is about to relate. The real standout -- the one destined for the movies, as most of McCabe's books now seem to be -- is the final story, "The Forbidden Love of Noreen Tiernan." Perhaps what's so good is that here we finally get the hell out of Barntrosna. Young Noreen, an affianced student nurse, hightails it to London to work at Bartholomew's Hospital, where she ends up shagging Stefanie Diggs, her butch roommate. When she stops writing home, her mom, her gruff fianci, a game priest and the Protestant botanist Eustace De Vere-Bingham take off for London to reclaim her from the arms of luscious debauchery. It's a story equally comic and tragic, so broad-minded -- and so Catholic -- that it's irresistible.