Your local pharmacy may be the next place to treat heroin addicts. 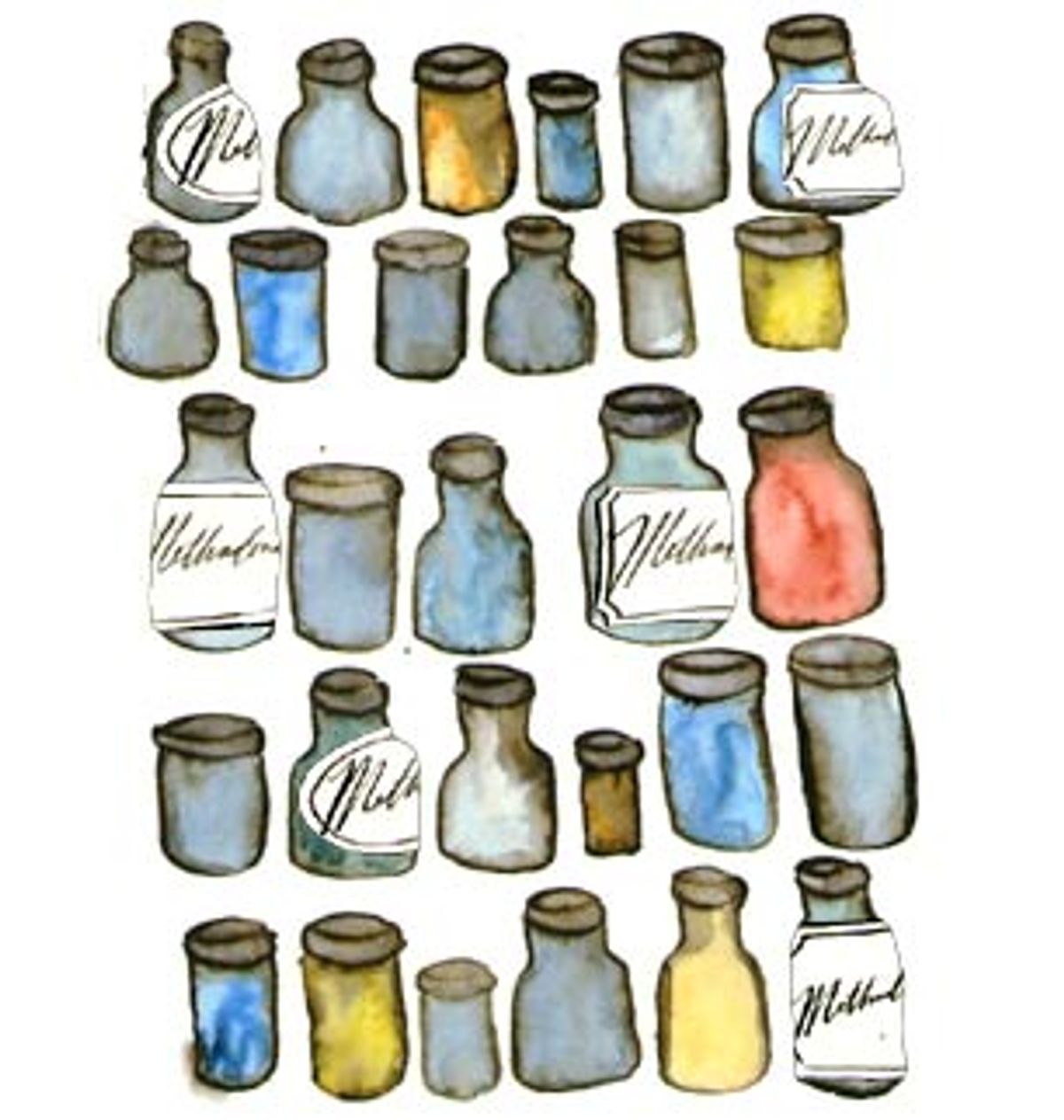 Let's say you have to make a run to the pharmacy. The kids need some bubble bath, your roommate is out of shaving cream and you've just taken your last dose of methadone. You ask the doctor who's treating your heroin addiction to renew your prescription, and you pick up a fresh bottle of pills.

If scientists at the forefront of federal research on drug treatment have their way, methadone and other drugs used to treat heroin addicts will move out of clinics and into doctor's offices and pharmacies. It's possible that buprenorphine, the latest drug for treatment of addiction to heroin and other opiates, will be in pharmacies by this summer, according to one leading researcher.

"Office-based methadone treatment would represent an enormous step forward in treating heroin addiction," says Alan Leshner, director of the National Institute on Drug Abuse (NIDA), in response to a new report in the Journal of Urban Health: Bulletin of the New York Academy of Medicine. "This study shows that practitioners understand that their addicted patients are suffering from a treatable disease, and they are willing to provide that treatment."

Sharon Hall, a researcher at the University of California at San Francisco whose study on methadone treatment appears in the Journal of the American Medical Association, concurs: "My feeling is anything that moves drug addiction treatment from clinics to physician's offices and pharmacies is a major step. It takes it from a moral issue to a medical issue."

The past five years have seen a 25 percent increase in heroin use. There are now an estimated 800,000 heroin addicts in the United States, and only 180,000 of them are being treated with methadone. Drug treatment specialists have been trying for many years to loosen strict federal and state regulations that require methadone to be administered at public clinics. They argue that many more people would undergo treatment for their addictions if it wasn't provided only at clinics. The stigma of going to such clinics often keeps addicts away, as does the requirement to come to the clinic every day to get a methadone dose. "There's a group of addicts who refuse to go to clinics," says Frank Vocci, director of treatment research and development at the NIDA.

Even the National Academy of Sciences and the National Institutes of Health have recommended integrating methadone treatment into general medical practice as a way to increase the number of individuals receiving treatment.

One of the reasons there is strong support for moving heroin treatment out of clinics and into mainstream medicine is the increased use of potent, cheap heroin by middle-class suburbanites and teenagers in small towns across the country -- from high-class suburbs outside Chicago to bucolic towns in Vermont. They start by snorting and smoking heroin and wind up with habits they cannot break, drug enforcement officials say.

"Many of the users are lulled into a false sense of security, believing that because they inhale heroin, they are less likely to become addicted to it," said Drug Enforcement Administration agent William Nelson in testimony before a congressional committee last year. "As a result, we're seeing a rise in first-time heroin users."

The phenomenon of middle-class heroin use is so new that officials are just starting to compile statistics. By one measure, emergency room visits for heroin rose from 33,000 in 1990 to 70,000 in 1997. And the number of teens seeking emergency treatment for heroin showed a "dramatic increase," Nelson testified. In the Philadelphia region and other metropolitan and suburban areas, heroin is on its way to eclipsing crack cocaine as the drug of choice.

"More 20-something professionals are showing up as heroin addicts," says Jeremiah Daley, head of the Philadelphia Police Department's narcotics unit. "They aren't all doctors and lawyers, but enough people working important jobs are using dope. We locked up a school-bus driver the other day. It's frightening. Young, white suburban housewives are becoming as common as middle-aged African-Americans."

Potent new varieties of heroin that can be snorted rather than injected may be on their way to becoming the "mother's little helper" of the new millennium. In response, the push for new and better treatments is becoming a priority. President Clinton has asked Congress to increase the treatment and prevention research budget by $37.2 million, and scientists are testing some promising new drugs.

Methadone, used for more than 50 years as the principal pharmacological treatment to combat heroin addiction, remains the drug of choice. Methadone is an agonist opioid that affects the nervous system much the same way heroin does. It relieves craving and reduces symptoms of withdrawal, but without giving the user a high.

New studies show that higher doses of methadone are more effective in keeping addicts from relapsing. In ongoing tests at Johns Hopkins University Medical Center in Baltimore, doctors are upping the daily dose from 25 milligrams to 100 milligrams, with promising results. During treatment, only about 30 percent still use opiates, and when treatment stops, as many as 80 percent relapse. Methadone's only side effects are constipation (as with heroin) and sweating. "Methadone treatment can be highly effective when properly delivered," says Eric Strain, the lead researcher in the Johns Hopkins study. "Properly delivered means prescribed along with counseling and other psychological therapies."

A relatively new version of methadone called LAAM (for l-alpha-acetyl-methadol) is growing in popularity among recovering addicts. A new pill made by combining buprenorphine and naloxone is also promising; in clinical trials, it was found to "reduce or eliminate" the craving for heroin in more than half the heroin addicts. As narcotics, buprenorphine and naloxone would have to be strictly regulated, but the Food and Drug Administration has said the treatment is "approvable," which is one step from full approval. "This is a big deal," says the NIDA's Vocci.

The trials took place in six states: California, Florida, Illinois, New York, Texas and Washington. What's unusual about the trials is that they were conducted outside traditional drug treatment clinics. Doctors administered the new drugs in group practices, private offices, community mental health facilities and veterans clinics. "The idea is to drive it toward traditional medical practice as much as possible," Vocci says.

Under current regulations governing methadone delivery, addicts in treatment have to go to a clinic every day so a nurse can watch as they down their dose of methadone. The next stage of treatment allows them to take a dose or two home. Strain says a small proportion of addicts in treatment is ready for pills from the pharmacy.

"These people could well be walking by you in the supermarket," he says, "only they might be dressed better than you."

Since methadone is itself an addictive drug, it is strictly regulated, and it is illegal for doctors to prescribe it. The regulations, developed in the early 1970s when methadone treatment increased tenfold, are gradually being liberalized, with treatment in doctor's offices being the ultimate goal. "We're working our way towards that," Vocci says.

Once the federal regulations are changed, researchers say, pharmacies will be willing to dispense methadone, LAAM and other treatments.

Researchers are less enthusiastic about ultra-rapid opiate detoxification (UROD). Under this radical treatment, heroin addicts are anesthetized during the "cold turkey" phase of recovery while doctors administer a series of intravenous drugs to remove the opiates in the nervous system causing addiction. The treatment has proved costly, controversial and perhaps even deadly for a few patients, and studies of the method are under way. The demand for such instant detoxification comes from the new addicts: middle-class suburban youth.

"What I'm seeing now is kids and parents who are desperate," said Dr. Lance Gooberman in a recent New York Times article. Gooberman, who had been performing UROD in New Jersey, was barred from providing the treatment by state medical examiners, who said the procedure "constitutes a danger to the public's health, safety and welfare."

Parents are indeed desperate. Take Burlington, Vt., a small college town on Lake Champlain known as "Boulder East" because of its rock music scene, cycling trails and nearby mountains for skiing. The city always had a few junkies, but now teenagers are buying dope in City Hall Park, across from the mayor's office, and showing up in emergency rooms. "Evidence of a small but growing heroin problem cannot be ignored," the Burlington Free Press acknowledged in an editorial last October.

Or Westminster, Md., a small town amid rolling farmland near the Pennsylvania line, which was just hit with a few heroin overdoses among teenagers. Baltimore has always had its share of junkies; now heroin arrests are off the charts in the nearby suburbs of Carroll County. Teenagers in the suburbs around Richmond, Va., have also been getting hooked on smack, according to the DEA. Likewise, heroin that used to be the drug of choice primarily among Seattle's musicians has been showing up from King County, Wash., to Eugene, Ore.

Clinton's new federal budget would raise funding for drug enforcement to $18.9 billion, an 8 percent increase over last year's allocation of $17.8 billion. Despite the hefty increases, the war on drugs is losing the battle against heroin.

"We're not going to win it with law enforcement," says Kermit Miller, a narcotics officer on a federal task force in Arizona. "We're just a stopgap. We're holding the line."

Ten years ago the average purity of heroin on the street was perhaps 10 percent. Now heroin from South America has a purity as high as 70 percent. Stronger heroin means that middle-class users can snort or smoke it, avoiding the complications and health risks of shooting up.

Heroin supply routes used to follow the old French Connection path from Burma and Thailand through Europe to the United States. But since federal agents and Thai army units wiped out heroin warlord Khun Sa in 1994, Colombian drug cartels have been growing poppies in South America, processing the heroin and shipping it through Mexico or Puerto Rico to U.S. markets.

The dealers have adapted to their well-heeled suburban customers. One 14-year-old pusher in Wilmington, Del., sold smack under the brand name "Landrover." By 1999 dire numbers started showing up in federal statistics: Heroin use was up in St. Louis, Seattle, Texas, Washington, D.C., Baltimore and Denver, where the Community Epidemiology Work Group report mentions "record mortality" among "new young users." Indeed, "increases in heroin use in younger populations were reported in seven cities," said the group, part of the NIDA.

Federal researchers are hoping that the increased demand for heroin among younger, more affluent users will focus more attention on treatment and their goal of making medications available where people go to buy aspirin and shampoo.

There has been some resistance. New York Mayor Rudy Giuliani caused a ruckus two years ago when he announced that the city would no longer provide methadone at its clinics, but he backed off a few months later and added $5 million to the city's methadone budget. While Narcotics Anonymous and other groups are opposed to any use of addictive drugs, opposition to mainstreaming methadone maintenance therapy has yet to materialize.

"There's very little opposition to the idea that certified, trained physicians be involved in administering methadone to stabilized patients," says Mark Parrino, president of the American Methadone Treatment Association. "The problem becomes, Should all doctors be able to prescribe methadone to opiate-dependent patients?" Two doctors are prescribing methadone in model programs in New York, Parrino says.

"It's time to move treatment from clinics to physician's offices and pharmacies," says researcher Hall. "This is the underlying issue in drug addiction."